Hairdresser flees in terror from date after being ‘catfished’

Hairdresser, 28, flees in terror from Tinder date after learning she had been ‘catfished’ and four men were lying in wait for her in pub car park

A hairdresser was forced to flee a Tinder date after four men turned up to meet her in a pub car park.

Amy Sharp said she was ‘catfished’ by the man and has blasted police at their lack of care, after she said officers told her they would be able to nothing about the incident.

The 28-year-old had been talking to a man she knew as James for around three weeks on the dating app before she agreed to meet him in person last Wednesday.

The pair agreed to meet in a pub at 9pm, however, when Amy arrived she said four men got out of the white Mercedes she had been told to wait for – and began to approach her in the car park.

Amy then called ‘James’, only for one of the men’s phones to light up as he walked towards her – prompting her to realise the account had used fake photos to lure her in.

After fleeing and calling the police, Amy claims cops told her ‘James’ admitted he’d used a fake name and pictures as he was scared his girlfriend would find out – before the case was dropped.

The hair and make-up artist believes she would need to have been attacked for the police to do anything and is calling for the law to be changed about catfishing.

Catfishing is using a fake profile or identity to form a romantic relationship with someone online. It is not currently illegal in the UK.

Amy, from Somerset said she was really shaken up from the incident and said it was clear all four men weren’t coming to take her for a drink.

‘With all the Ted Bundy stuff, I know it’s really extreme, but you just don’t know how far it’s going to go.

‘The more I think about it the scarier it is. It was obviously calculated. I don’t want to know what would have happened if I got out that car.

‘At the end of the day, there were four blokes there. I’m 5ft3 and nine stone. Let’s be honest, they weren’t all coming for a drink. 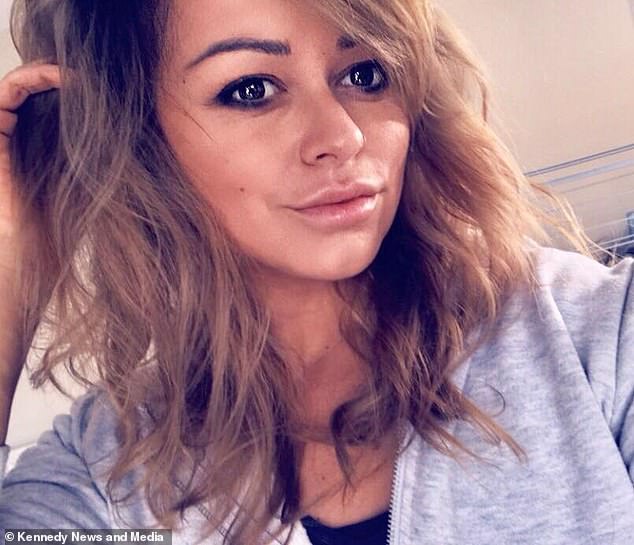 ‘Four blokes going to meet one girl on her own – I don’t know what they were planning on doing. They weren’t all going to take me for dinner.’

Amy, who claims she’s been ‘single for ages’, initially met James on Tinder and found him ‘totally normal’.

The pair even spoke over the phone every day for three weeks before agreeing to meet for a drink in Tiverton, Devon, which was 20 minutes from Amy’s house.

Amy pulled up in the pub car park and spotted the white Mercedes that ‘James’ had told her to look out for – but with four men waiting in it.

Leading up to the meeting, she said it was all totally normal and that he even had an Instagram and WhatsApp account and that all his photos matched up.

‘We spoke on the phone most days for three weeks. If I ever meet somebody I always chat to them on the phone first because you can get a better feel for them.

‘We got on well. He seemed really easy going and told me about his job, his family and his ex-girlfriend.

‘On the night, he was in the car he said he’d be in, a white Mercedes, and I parked opposite. I saw him get out the car with three other people.’

She highlighted that the incident happened so fast and that at first she thought one of the men looked like him, before finding out he had used a fake photo, as he already had a girlfriend.

‘All of the men started walking towards my car. I rang his number and his phone lit up and I drove off.’

Fleeing the scene quickly and counting her blessings that she had gone in her car, Amy was so shaken up she called her friend and then the police.

That night, she couldn’t stop thinking about what would have happened if she had got out of the car. 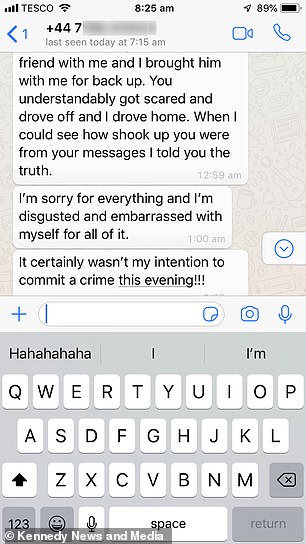 After the incident the man apologised to Amy and said he was ’embarrassed’ with himself (WhatsApp messages sent to Amy, above)

After driving off Amy said the man rang her and asked why she had ran away, to which she questioned why there had been so many people with him.

‘At first he said he brought a friend with him because he didn’t know I was genuine, then it came out it was a fake name.

‘He then said ‘okay, fine, I’m Matthew. I used a fake name and fake pictures because I’ve got a girlfriend and I didn’t want her to know’.

‘I wondered what he thought I was going to do when I got there and realised he was a different person.

‘He sent me a message after I said ‘what the hell was your plan when you are bringing three other blokes to meet a girl on her own in a pub car park at night time?’

‘He asked me not to phone the police and admitted ‘I’m disgusted with my thoughts and behaviour tonight’.

‘To me he was going to do something really dodgy. I told him ‘you’re sick. Don’t contact me again’ and blocked his number. I was so angry.’

After the incident Amy then phoned her friend and said the more she thought about it, the more she realised how ‘dodgy the situation was’.

After calling 101, Amy claims the incident was passed on to Devon and Cornwall Police before it was then passed on to her local force Avon and Somerset Police.

Avon and Somerset Police informed Amy it was not a crime to use a fake profile on dating websites.

She says a police officer texted her to say he had spoken to the man, who admitted he wasn’t called James but claimed he was the only one in the car.

Amy has now questioned why it wasn’t looked into further and is hoping to raise awareness of catfishers on dating apps.

Amy said: ‘The police asked ‘did he touch you?’ They said unless he’d actually attacked me, he hadn’t committed a crime.

‘There’s no law against using fake names online and using fake profiles. He basically said if I was under 18 it would be illegal, but because I’m 28 it’s not.’

Amy asked police what would have happened if he were to meet someone else who didn’t have a car.

‘I said to the police ‘what if he’d done this before? Isn’t there a law against luring girls under false pretences?’

‘He’s lied, there wasn’t one person in the car. I can’t believe they just believed what he said and didn’t check with me.

‘I replied saying ‘that’s a complete lie’, and they didn’t get back to me.’ 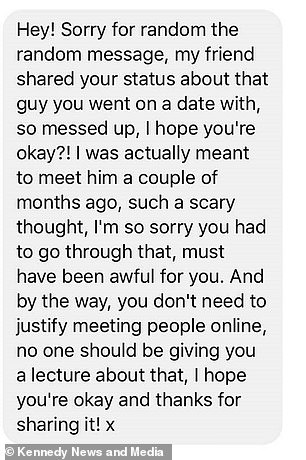 Since posting her warning online, Amy claims she has been ‘bombarded with messages’ from people who have also been victims of fake profiles – some even claiming to have been speaking to the same man.

She now says she wants to raise awareness of the issue, highlighting that many people had come forward to say they had been in contact with the same person.

‘I’ve had around seven or eight messages from people saying they had spoken to this guy, but with different names, different place, same picture.

‘I’ve been bombarded with messages from women saying they’ve had similar with a different guy.

‘People need to know this is going on.

‘I’ve met loads of people off the internet, I always tell someone where I’m going. I’d never meet someone down a lane.’

Devon and Cornwall Police were contacted for comment but had no record of the incident and said it was a matter for the victim’s local force, Avon and Somerset Police.

A spokesperson from Avon and Somerset Police said: ‘We’ve spoken to both parties and there’s no evidence that any criminal offences have been committed.’

A spokesperson from the Online Dating Association said: ‘It is worrying to hear what was reported.

‘No-one would fix a date with one bloke and think it in any way okay for others to turn up.

‘Over a third of all new relationships start online and sites and apps are part of everyday life for millions of us.

‘That is why operators work to check profiles, block troublemakers and act on reports of any thing untoward.

‘We do not speak for individual operators – whether they are in membership or not.

‘Parts of the Match group are members and have greatly supported our work on safety and other standards.

‘Tinder currently are not but will be sure to have profile checks and reporting in place.’

HOW CAN YOU CHECK IF YOU ARE BEING CATFISHED?

Dating apps and online websites are plagued with fraudulent profiles, known as ‘catfishes’.

‘Catfishing’ originated as a term for the process of luring people into false relationships, however, it has also come to encompass people giving out false information about themselves more generally.

These profiles often use images of another person to allow users to pretend to be someone else in order to get a date, or scam money from a lonelyheart.

Fortunately, there are certain ways to check if these profiles are real people or if they are bogus accounts —

This is probably the most valuable tool for catching out a catfish and can be done via Google.

To kickstart the process, people need only right-click the photos that are arousing their suspcions, copy the URL and paste it into images.google.com.

The search engine will search to see if the image has been used elsewhere.

If you find the picture associated with a different person to the one you’re speaking to on your dating app, it’s likely you’ve met a catfish!

2. Use an app called Veracity

It is useful for dating sites such as Tinder, Bumble and Grindr as it allows images from Dropbox or Camera roll (or similar) to be cross-referenced against any matching results.

Load the app, then select a screenshot of the suspicious dating app profile from your camera roll to launch the search.

The app will tell you if the picture belongs to somebody else.

Almost everyone who has a profile on a dating site will have a Facebook account (most dating apps require users to have one, after all!) so it is always advisable to track down your potential suitor on other forms of social media.

Google and other search engines have an extensive repertoire and most people will crop up in a search.

In this day and age, it’s unusual for someone to have nothing on Google.

Have a search through for them or their relatives, things they’ve said or posted in the past. If there’s nothing, that should raise alarm bells.

For prospective romantic engagements, seeing the face of someone you are virtually talking to is essential.

Anyone that asks for money online or via an app is likely to be a fraud.

This is probably a scam and should provide immediate red flags.