The criminal investigation into the assassination of Haitian President Jovenel Moïse took a surreal turn when the Caribbean island-nation’s top prosecutor asked the judge to charge Prime Minister Ariel Henry in connection with the July 7 slaying.

Chief Prosecutor Bedford Claude made the request in a two-page order to Judge Garry Orelien. He asked the judge to bar Henry from leaving the country. 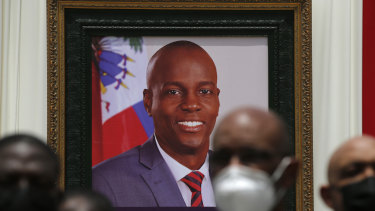 Authorities pose for a group photo in front of the portrait of late Haitian President Jovenel Moise at his memorial service in Port-au-Prince, Haiti.Credit:AP

There is just one problem. Claude had already been fired — by the PM — when he sent the request, according to a memo from the prime minister’s office.

In the letter dated Monday, PM Henry told Claude, the prosecutor, that he had been discharged for “serious administrative infractions”.

Lubérice, Vincent and Claude have over the past week or so led a campaign by Moïse holdovers against Henry, even demanding his resignation. 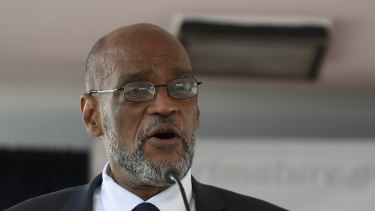 Two months after the Moïse assassination, the probe into his death has barely moved from where it was the first few days after the killing.

Some 44 suspects, including 18 Colombians and three Haitian Americans with ties to South Florida, have been arrested but authorities still have not said who allegedly financed the plot and why. They also have not identified the shooter, though they described Badio as “one of the brains” of the operation.

A respected neurosurgeon, Henry had been tapped by Moïse on July 5 to lead a new government, two days before his death. The surprise choice, while supported by some in the president’s entourage, was not welcomed by everyone. The night of Moïse’s killing, Henry was forced to relocate, according to sources, because his safety was not secured. 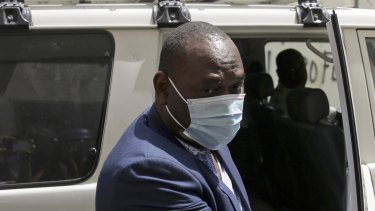 Moïse’s death provoked a three-way political battle that appears to be ongoing as various factions of Haitian society work either to hold onto power or to seize it. After initially calling for immediate elections, the United States has said conditions do not yet exist for elections to occur in Haiti and that it supports Haitian solutions to the country’s ongoing problems.

On Saturday, Haiti’s Office of Citizen Protection demanded Henry step down and hand himself over to the justice system.

Henry retorted on Twitter that “no distraction, invitation, summons, manoeuvre, menace or rearguard action” would distract him from his work.

The prime minister announced on Saturday that Haiti’s main political forces had reached an agreement to establish a transition government until the holding of presidential elections and a referendum on whether to adopt a new constitution next year.

The agreement establishes a Council of Ministers under Henry’s leadership.