The devastating images were taken at Lake Ngami — in the Okavango delta of Botswana — as the region endures its worst drought in decades. 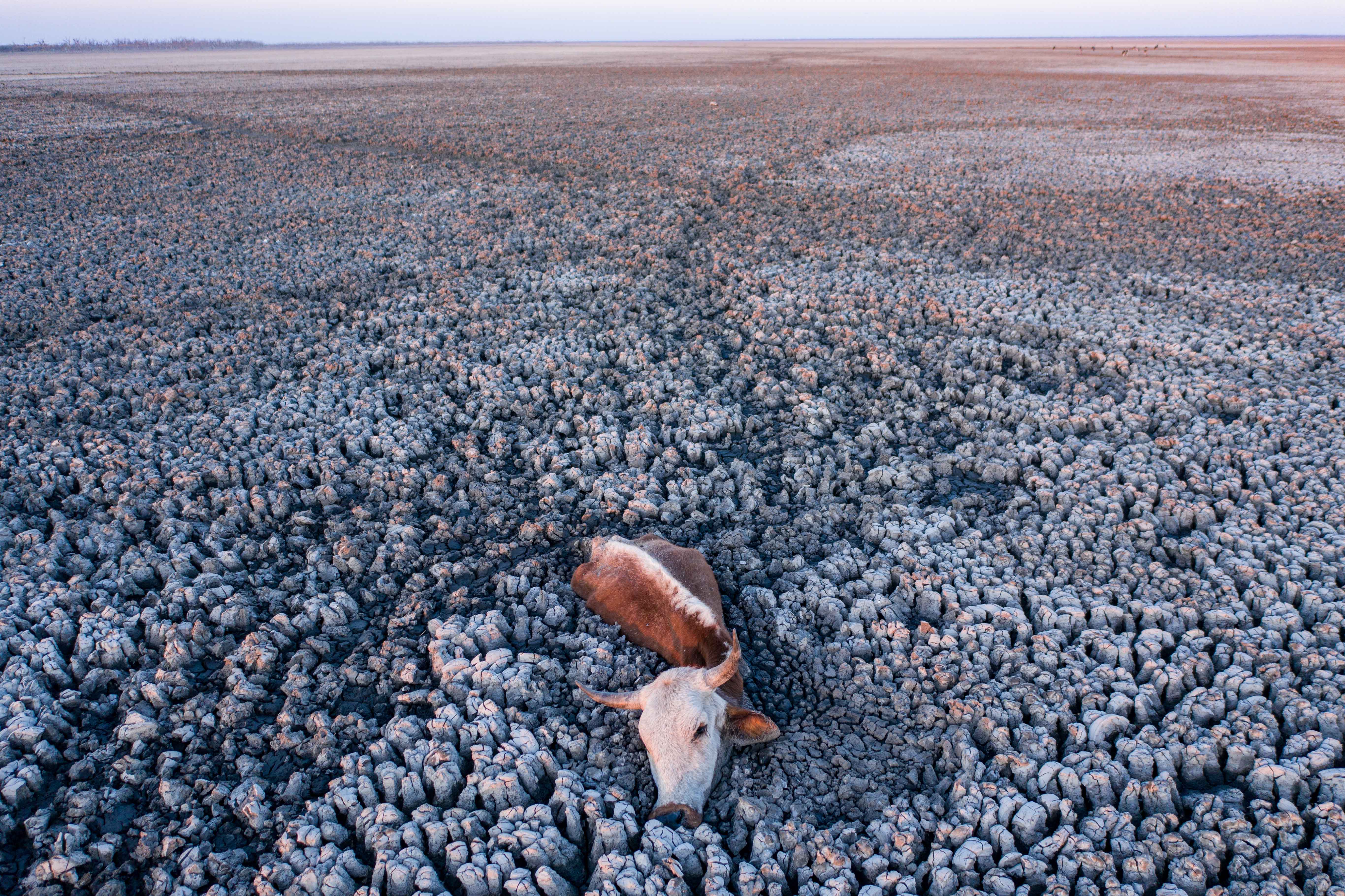 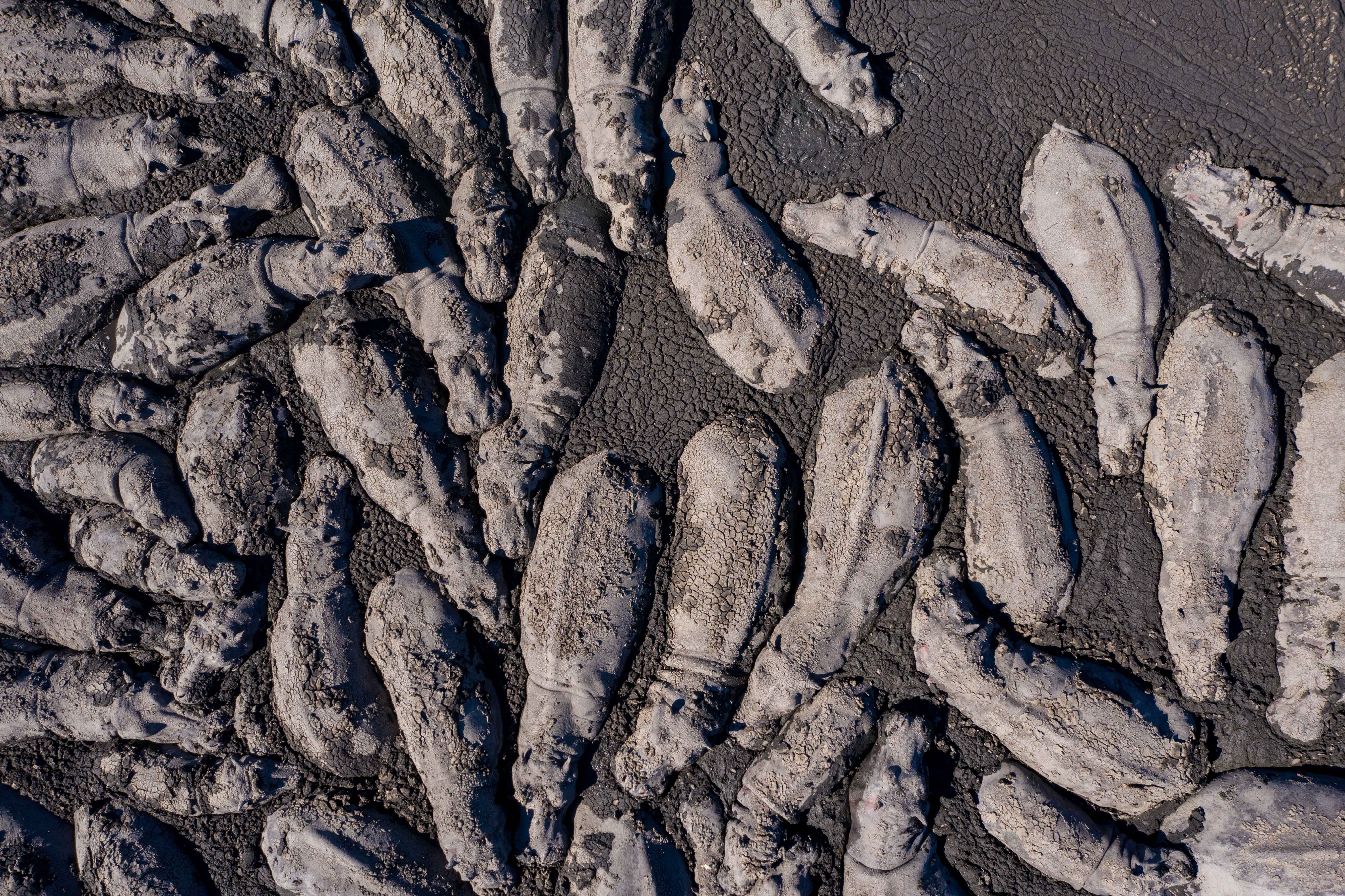 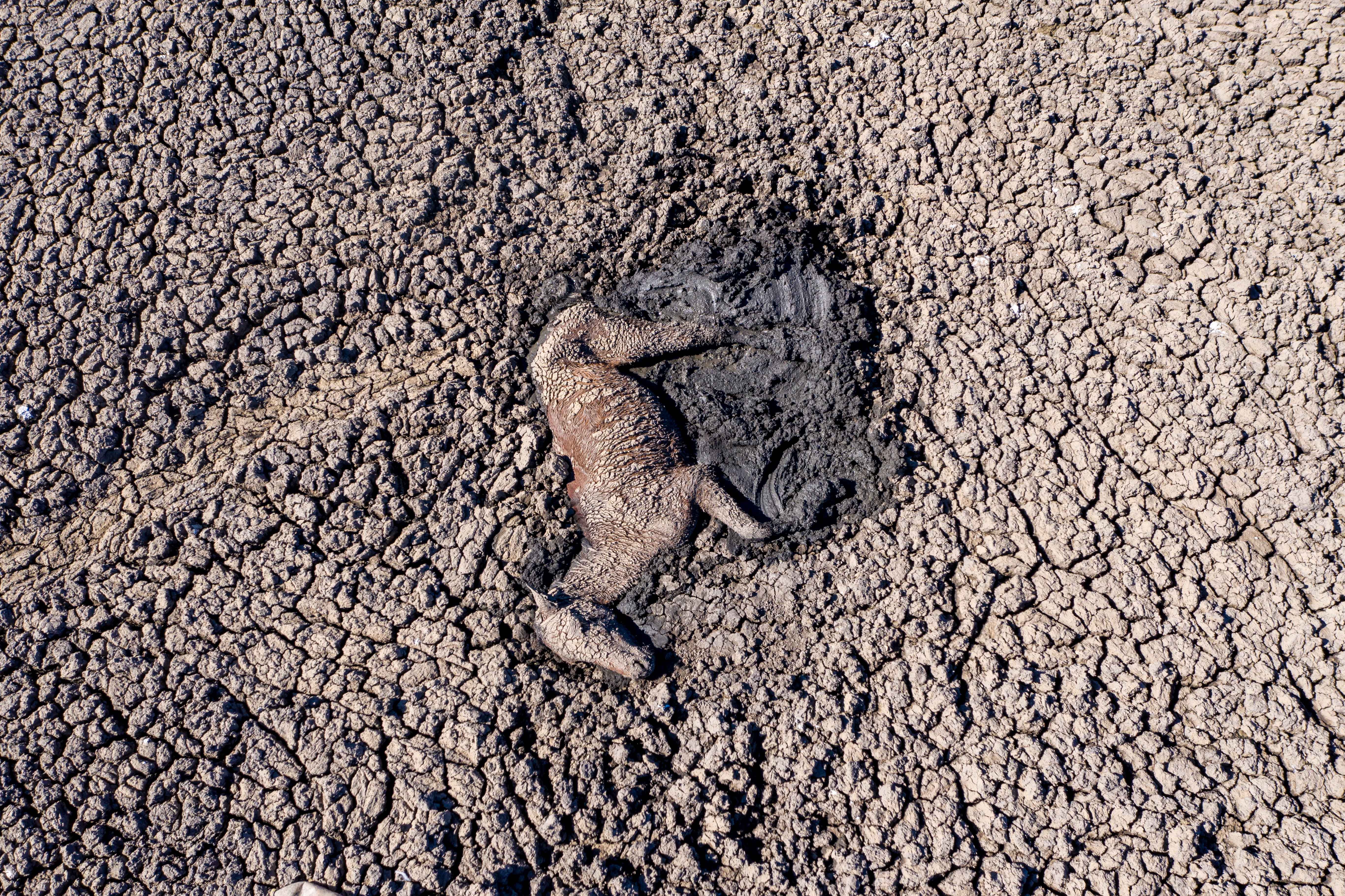 The photos lay bare the horrors of the chronic drought, with herds of animals dying of dehydration as a severe drought ravages the region.

Malnourished hippos crowd together in one of the very few remaining mud pools as fisherman collect the final few catfish in the background.

A dying horse can be seen attempting to kick his way through the crusty mud in a vain search for water.

A forlorn cow is caked in mud and trapped in the bog awaiting its grisly fate. 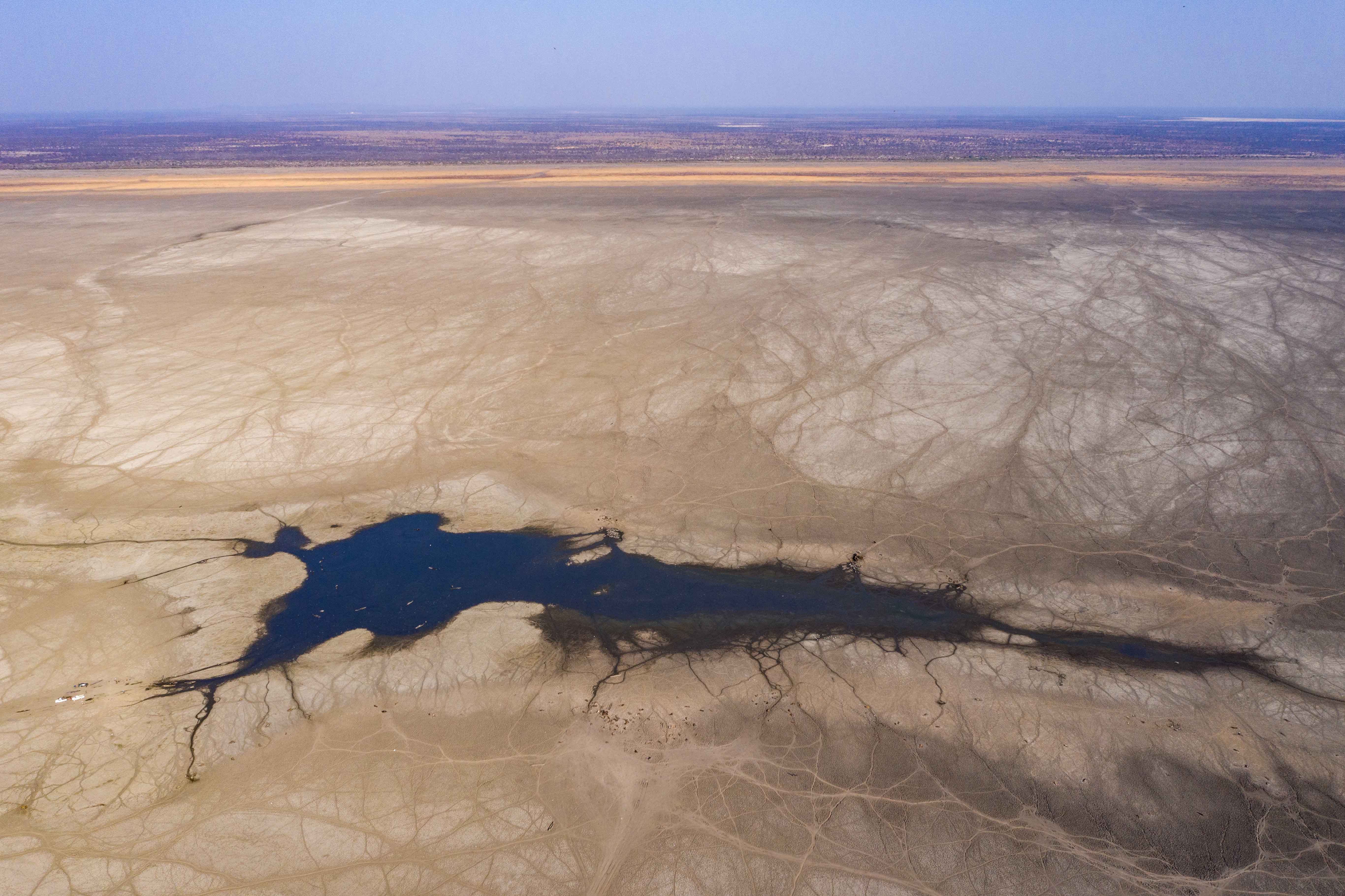 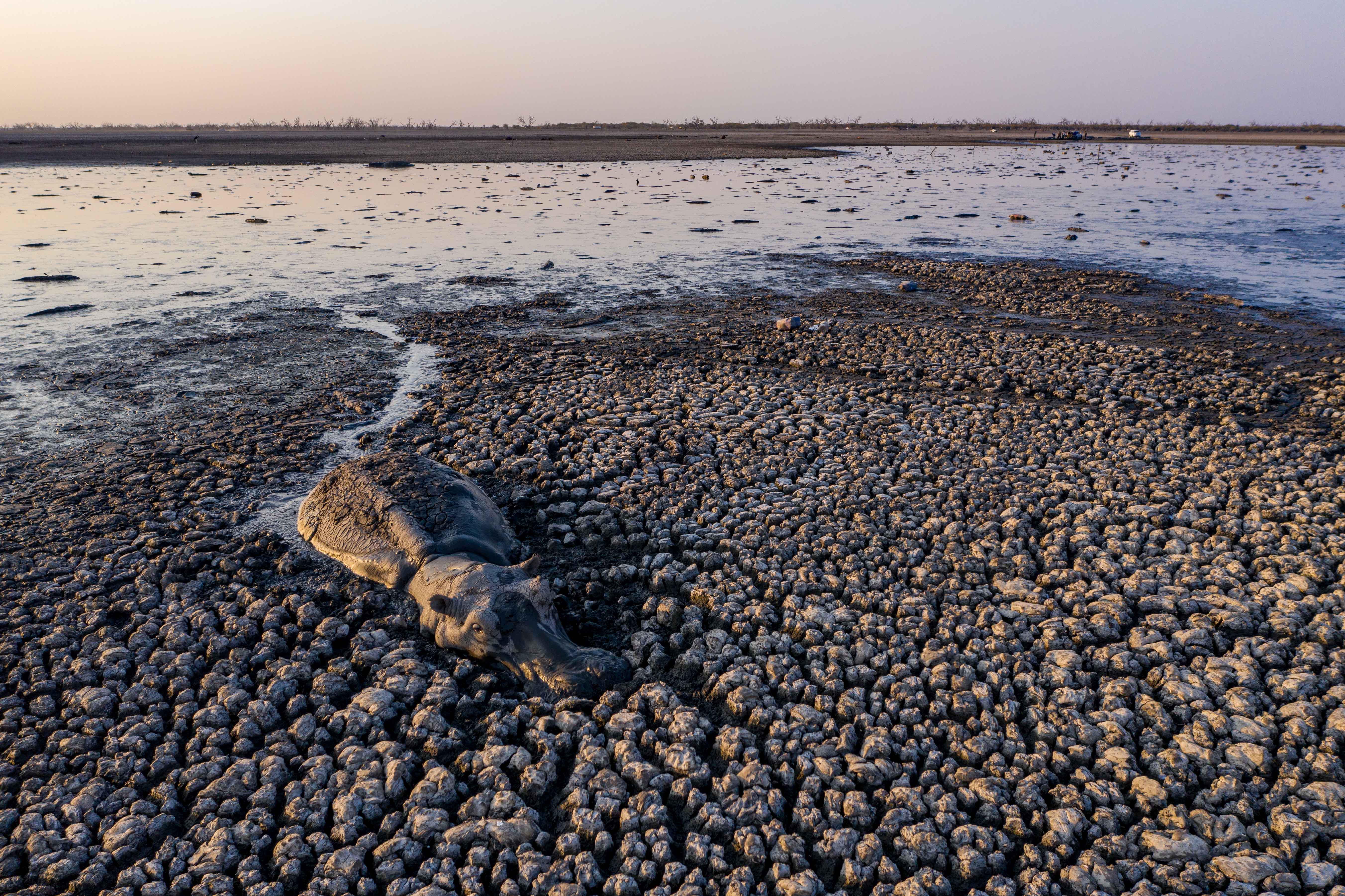 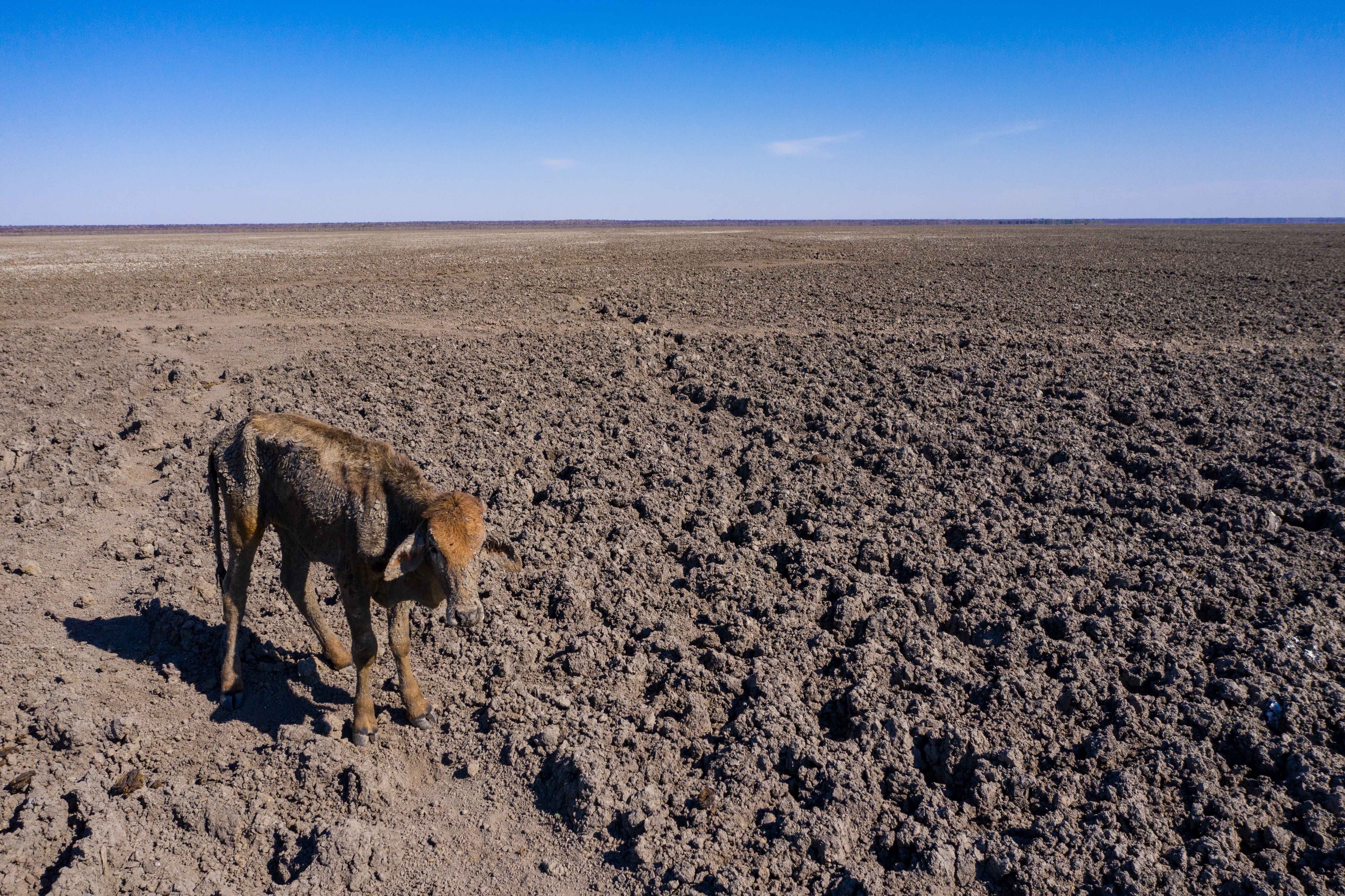 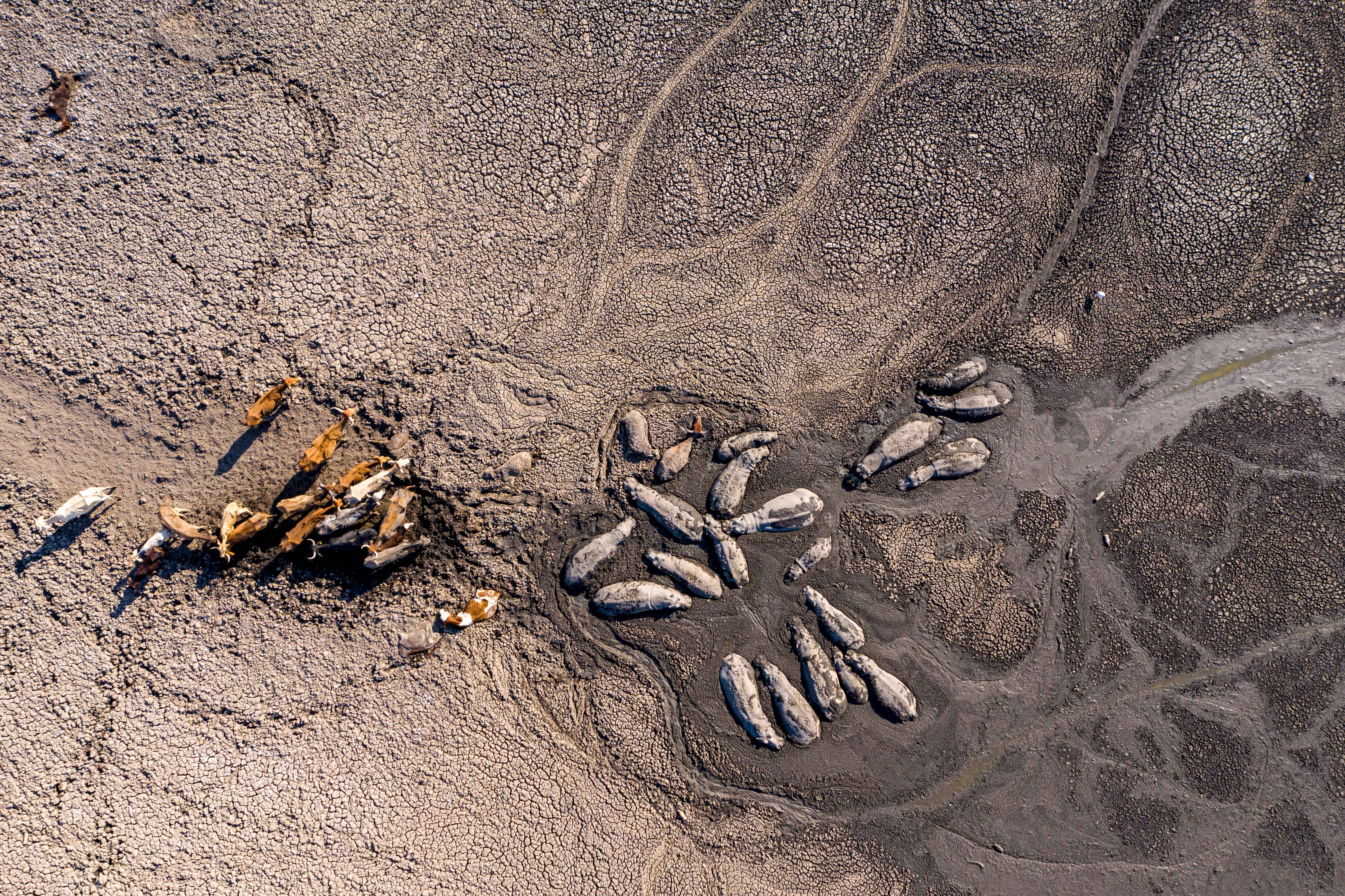 Another striking aerial shot shows desperate farmers hauling in the final few catfish from the lake before they also perish under blistering south African skies.

Meanwhile footage shows scavenging birds picking at the remains of the poor animals, which have succumbed to the deathly conditions.

Although nobody is sure the drying of the lake is directly due to climate change, Lake Ngami has not dried up entirely for nearly 40 years.

The lake is just the latest in a list of bodies of water that have disappeared as a desperate drought ravages the southern hemisphere.

The smell is appalling, and the animals’ suffering left me emotionally shattered

The El Nino effect may also have affected the region with up to 38,000 at risk by the rapidly diminishing water levels.

Wildlife photographer Martin Harvey, 64, who captured these sobering shots, said: “I can’t say this is in anyway directly linked to climate change as it has happened before in the 1980s I heard  — but perhaps it’s a forewarning of what is to come,” says 64-year-old. 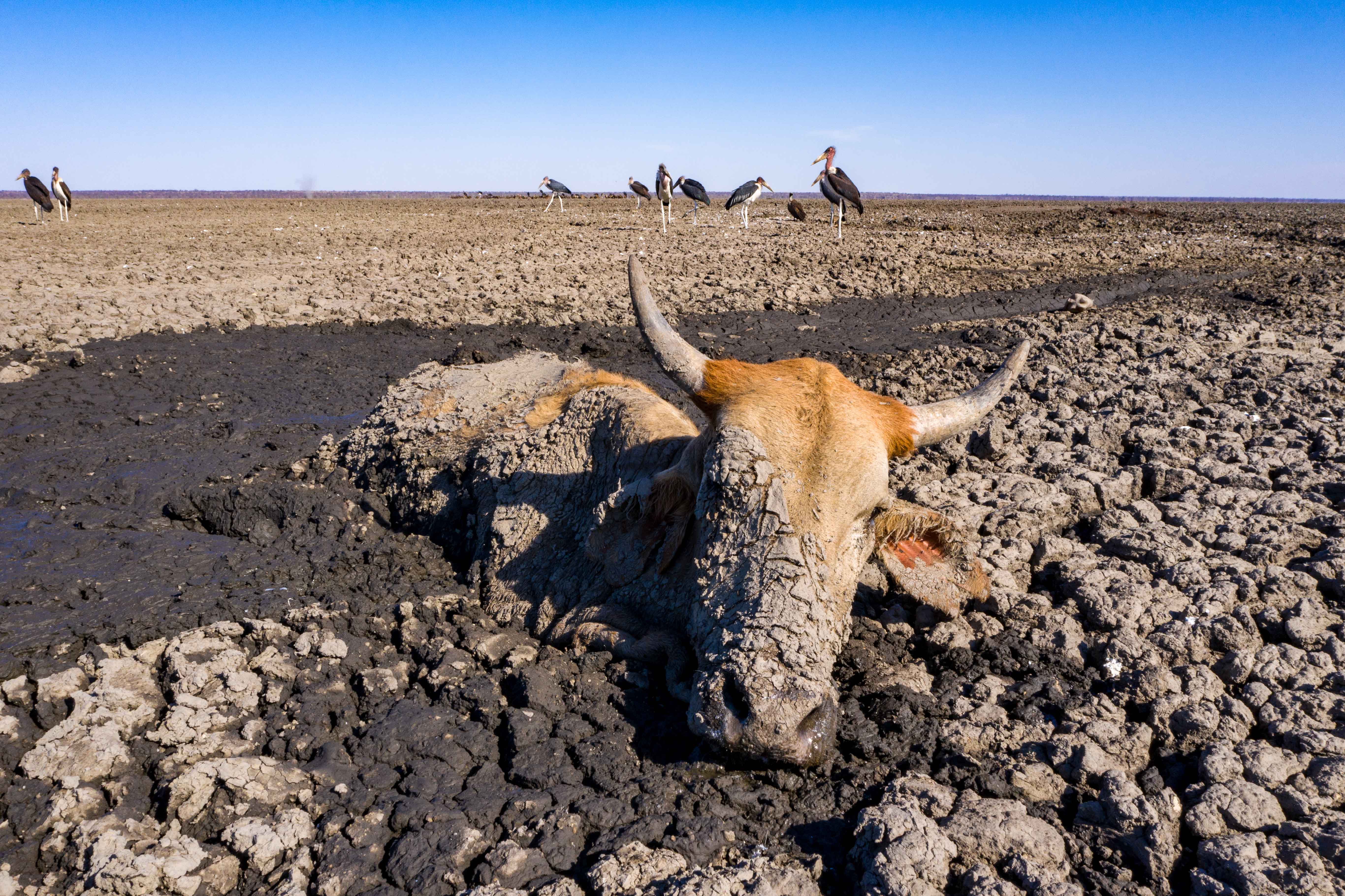 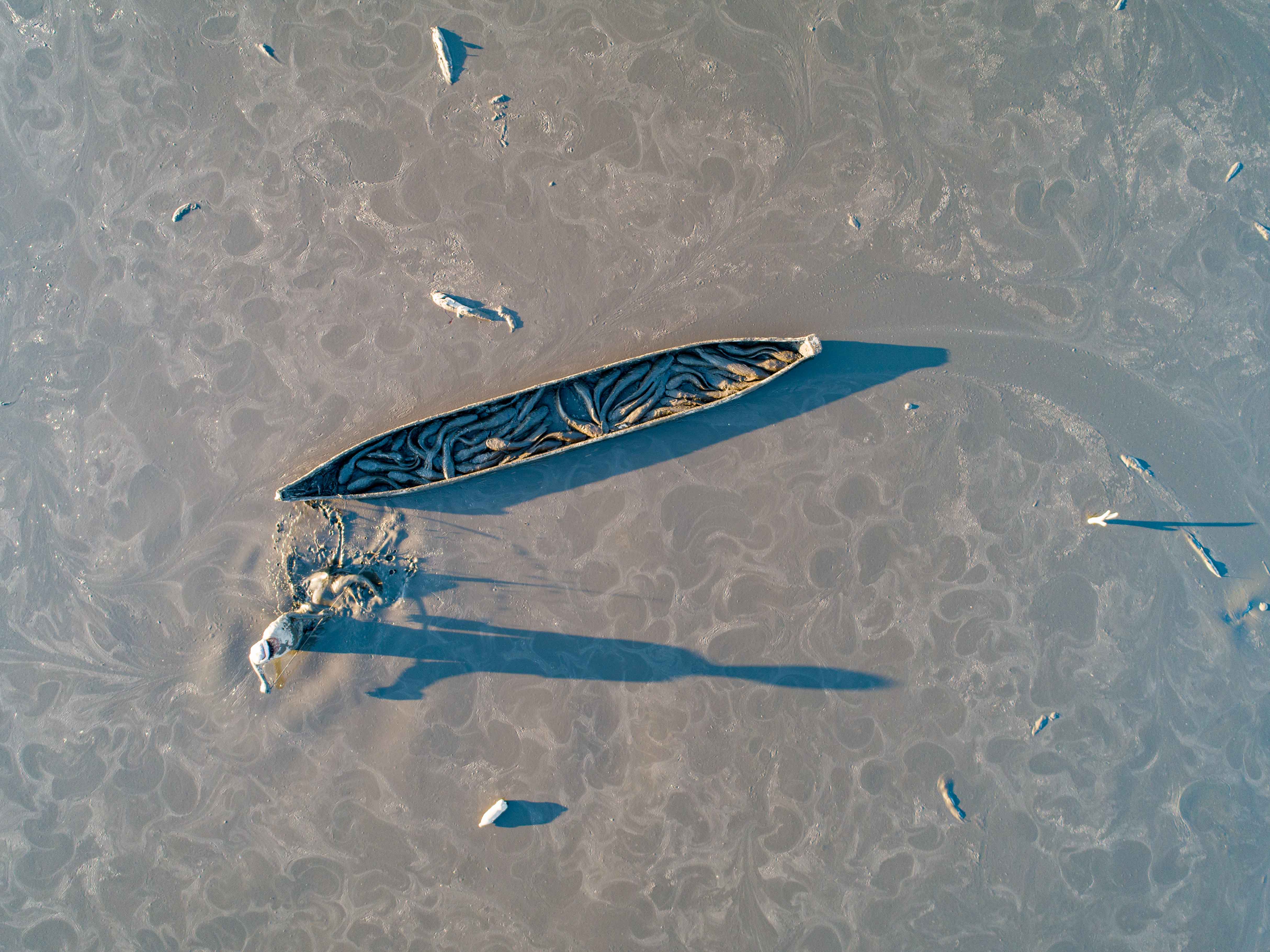 Mr Harvey said: “The Okavango varies with good years and bad years. I believe Lake Ngami has dried up in the past before — many years ago.

“But I guess the simple answer is that this is one of the most severe droughts to hit the area in decades.

“The lake is drying up after having water for many years, and hippos are starving to death as there is no grass left in the area.

“Cattle are getting stuck in the mud trying to get to the water and subsequently dying of thirst.

“There is simply no other water in the area. As the Lake dries up people are catching the last of the catfish but who knows what will happen next.” 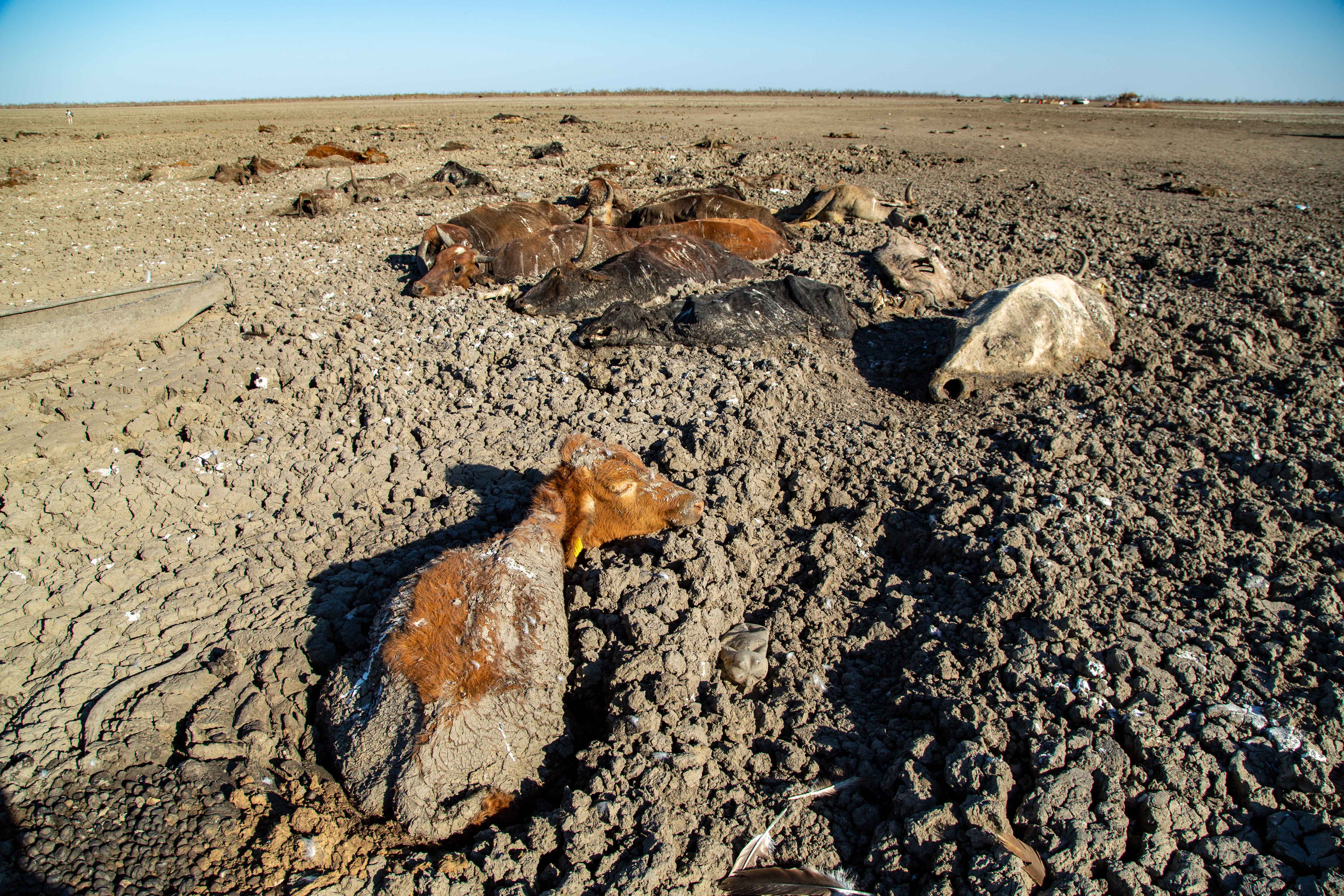 For the veteran wildlife photographer, this shoot was one of the most difficult he has ever undertaken.

“It was traumatising,” he admits.

“The smell is appalling, and the animals’ suffering left me emotionally shattered. People are horrified by what’s happening.

“I’m sure for the livestock owners it must be economically devastating.

“I only spoke to the fisherman who are trying to take advantage of catching the fish before the all die.

“They are poor people desperately trying to make any money they can.

“The lake will be completely dry in a few weeks at this rate so there is still more death to come.” 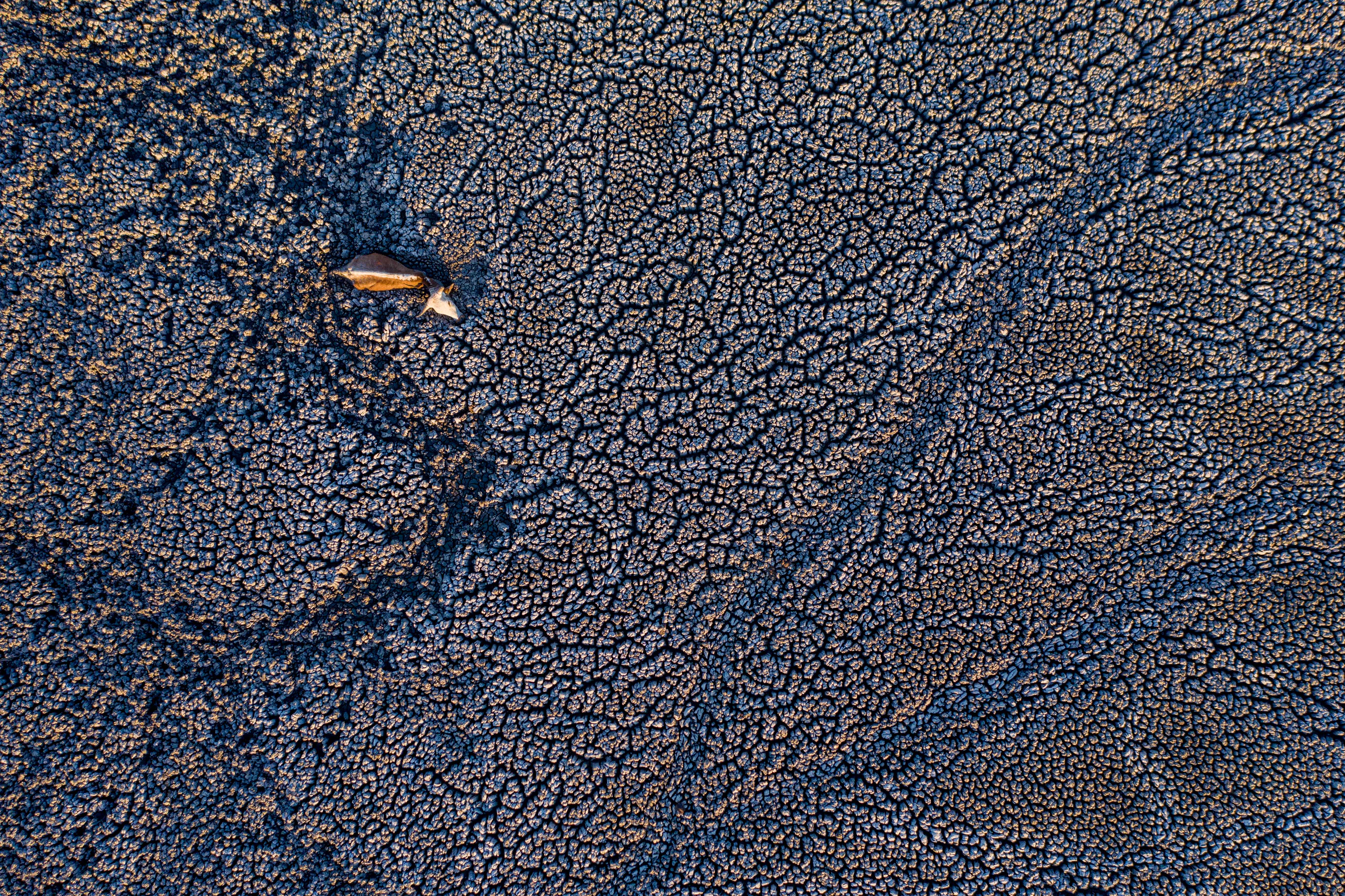 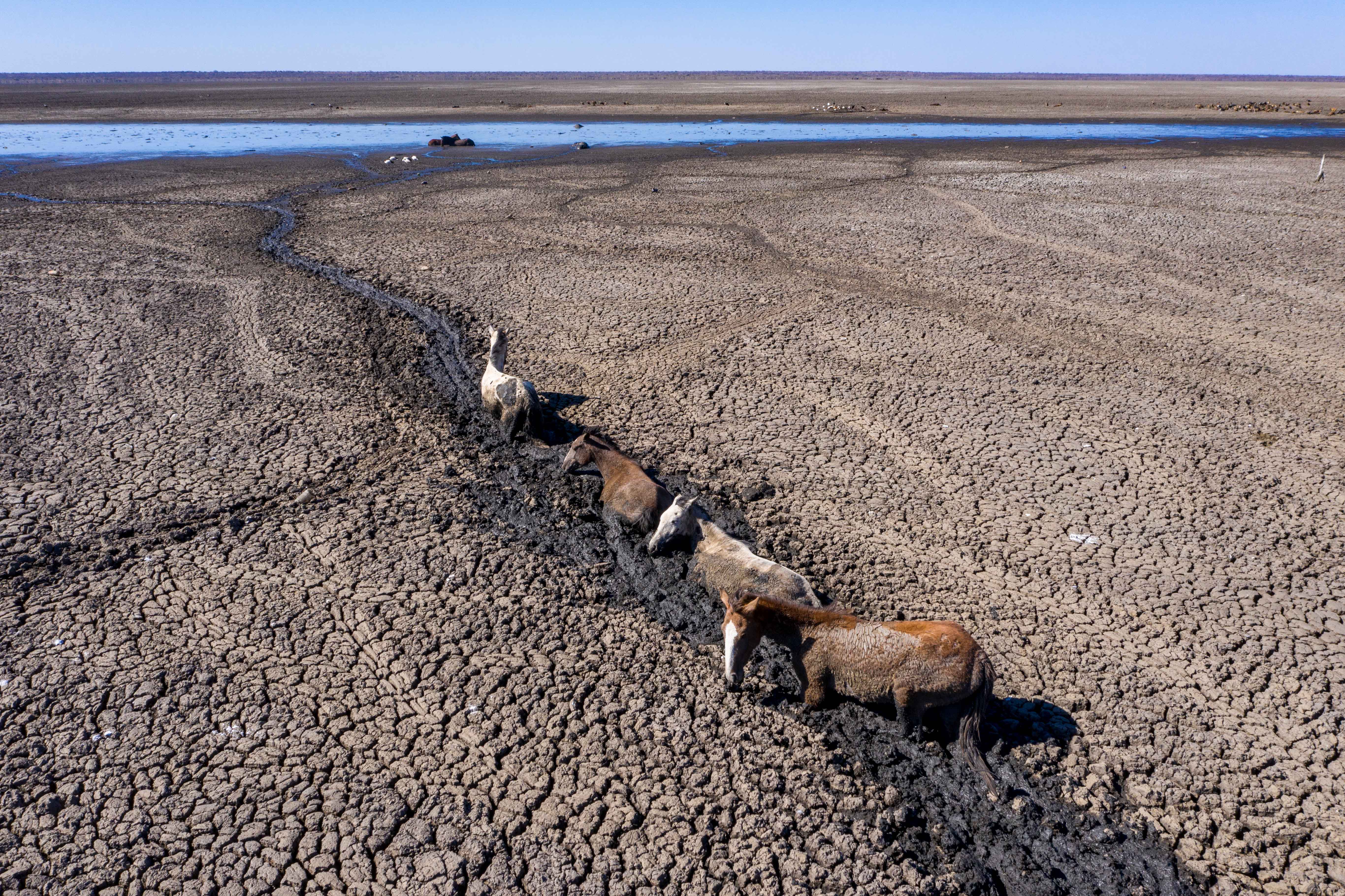 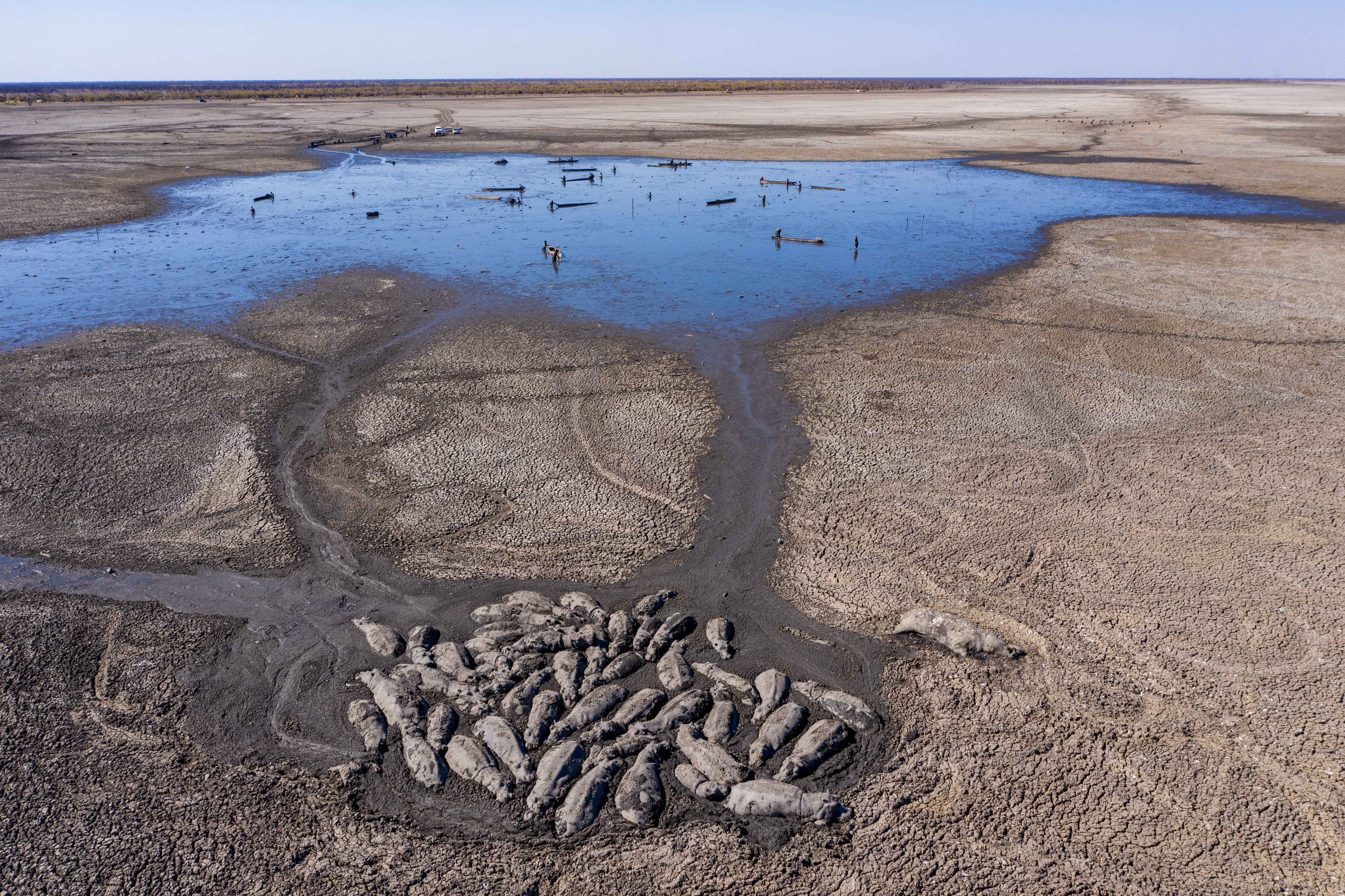 The Tweets About BTS’ ‘Today’ Show Appearance Make 1 Big Point
We and our partners use cookies on this site to improve our service, perform analytics, personalize advertising, measure advertising performance, and remember website preferences.Ok