A forensic psychologist who helped convict Bill Cosby told Harvey Weinstein’s sex crimes trial on Friday that it was ‘extremely common’ for victims of sexual assault to continue to contact their attackers, a day after Weinstein’s attorneys grilled one of his accusers on the stand for doing just that.

Dr. Barbara Ziv, a professor at Temple University Medical School, said was the first witness called to the stand on Friday, a day after actress Annabella Sciorra told how Weinstein allegedly raped her in her apartment in the early 1990s.

Weinstein’s attorneys, during cross-examination, grilled her and asked why, if he had attacked her as she claimed he did, did she continue to seek out work from him for years that followed. They also asked why she did not tell any of her co-stars about it; she said she did not have the chance.

Dr. Ziv’s testimony began with her dispelling what prosecutors call a ‘common rape myth’ that if a victim contacts her accuser after the attack, it undermines the severity of it or even the existence of it.

She explained that abusers used a ‘carrot and stick’ approach to controlling their victims who fear their attacker would ‘ruin me’.

The ‘stick’ is that the women think to themselves ‘god forbid they could ruin the rest of my life and make it impossible to go on’.

The use of Dr Ziv was to preemptively blunt the attacks that Weinstein’s lawyers would use on the accusers.

She was the first witness in the retrial of Cosby that resulted in a conviction – during the first one prosecutors began with a victim and it was a mistrial. 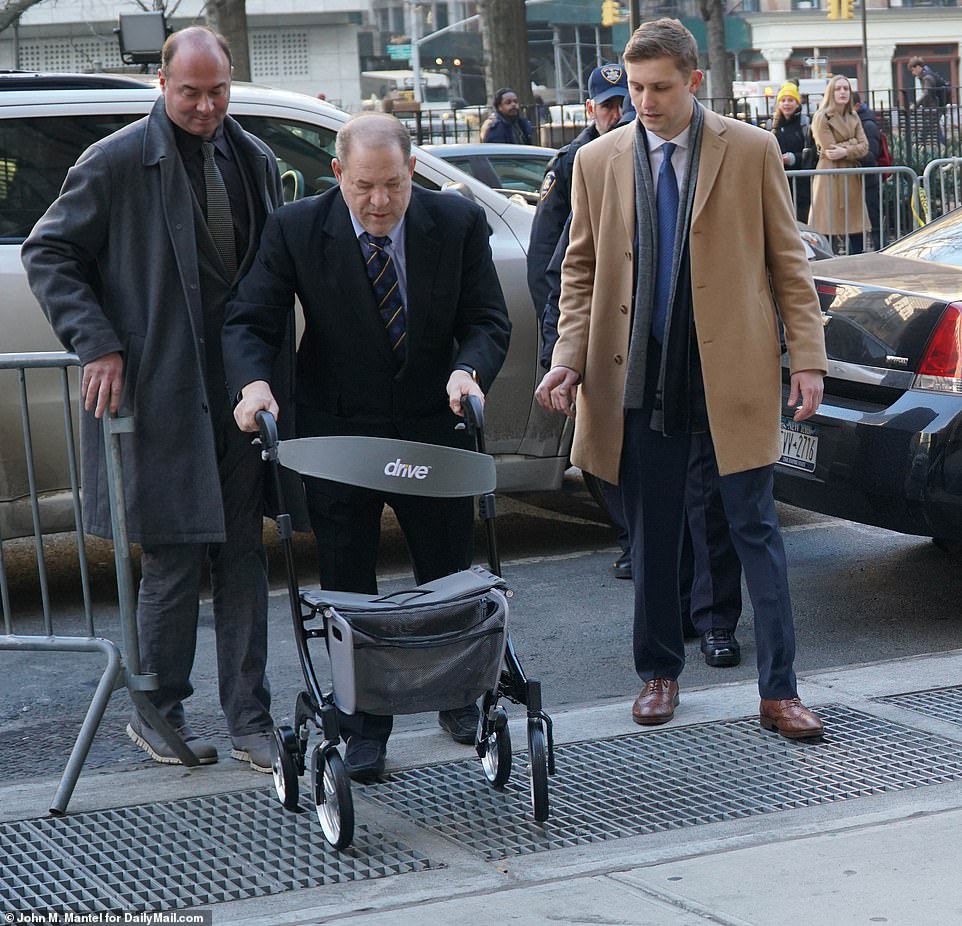 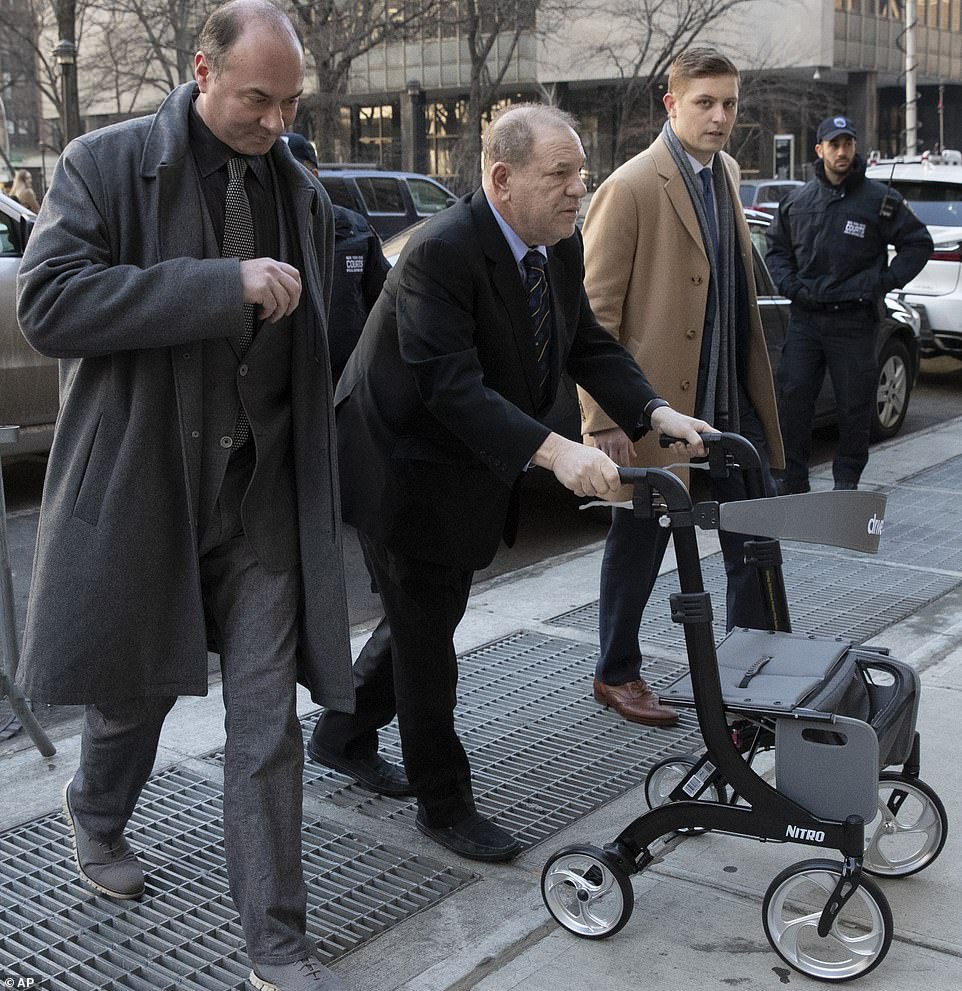 Harvey arrives at court Friday for his trial on charges of rape and sexual assault. He denies all the charges and faces life in prison if convicted

Dr Ziv Temple University, told the jury that there were a number of ‘rape myths’ which she defined as ‘commonly held beliefs about sexual assault that are not true’. 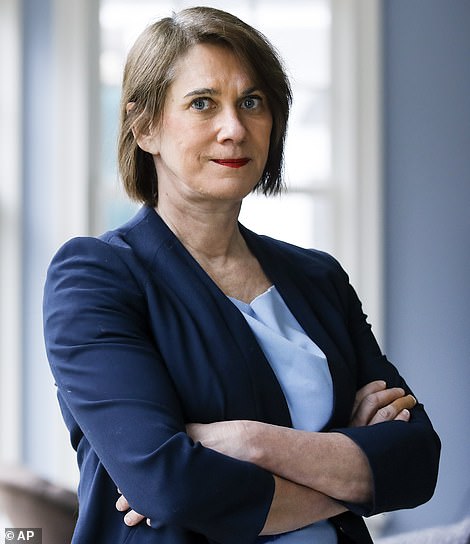 Dr. Barbara Ziv testified that it was a known fact some rape or sexual abuse victims contact their abusers for long periods of time after the fact – especially if they have something to offer them

Dr Ziv said it was ‘not true’ that sexual assault occurred between strangers and in fact 85 per cent was carried out by somebody the victims knew.

She said the ‘majority’ of women did not fight back and that punching, biting, kicking and hitting were not normal.

Dr Ziv said it was ‘absolutely untrue’ that most victims reported their crime to the authorities – and the police were last on the list of people to speak.

According to Dr Ziv, it was the ‘norm’ for victims of sexual assault to maintian contact with their victims.

She said: ‘The reasons are complex and it’s like a carrot and stick.

‘The stick is the fact that the person is devastated by sexual assault, they think, “OK it’s behind me..I don’t want it to get worse, I don’t want this individual to ruin my reputation and put my job in jeopardy. I can handle this physical trauma but God forbid they could ruin the rest of my life and make it impossible for me to go on. He will ruin my reputation and nobody is going to believe me,”‘ she said.

Attackers could make ‘implied or explicit threats’ to keep their victim under control and that they also felt like ‘damaged goods’, so might agree to a second sexual encounter, even though they felt like an ‘idiot’ after. 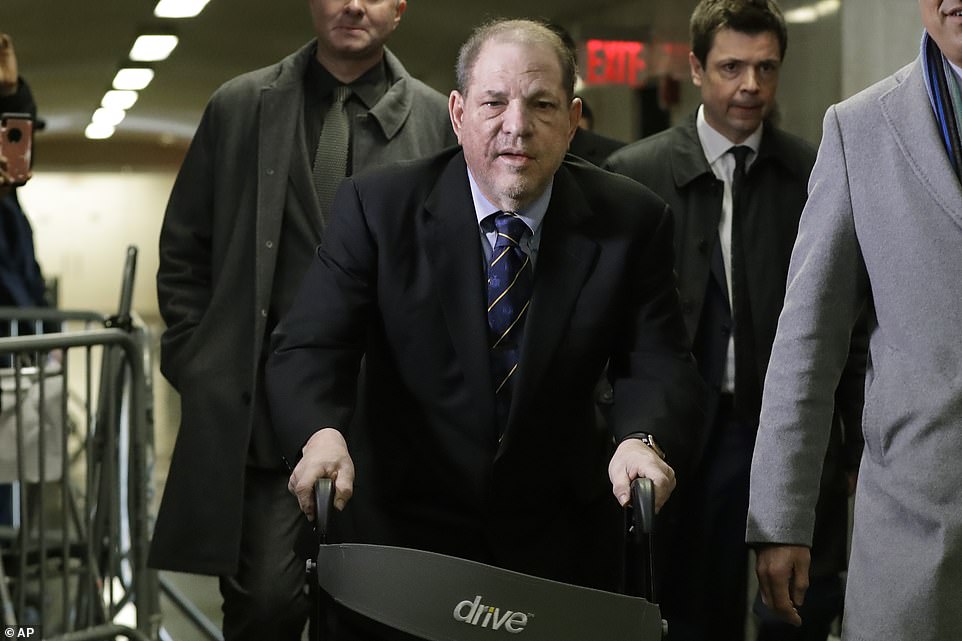 Weinstein on his walker in the courthouse on Friday. The 67-year-old denies the charges 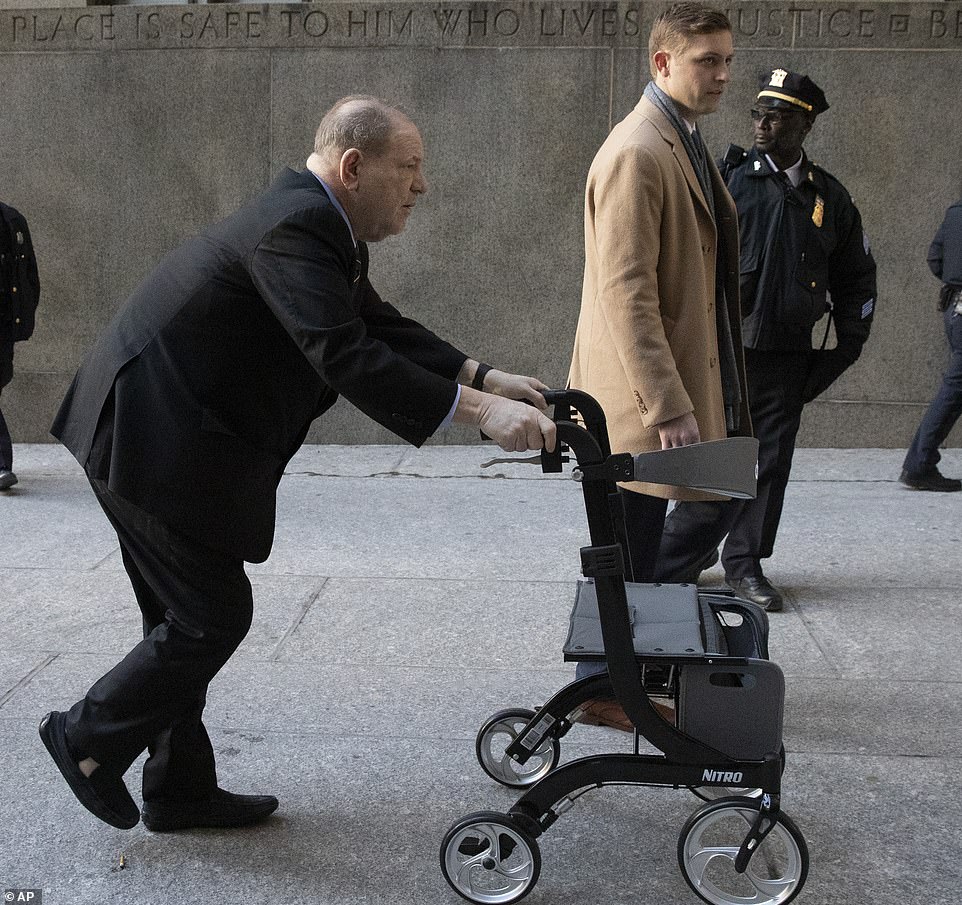 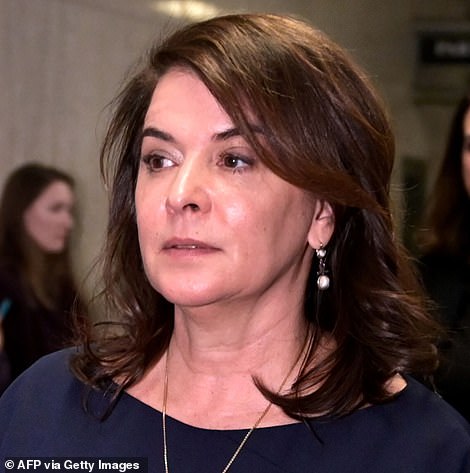 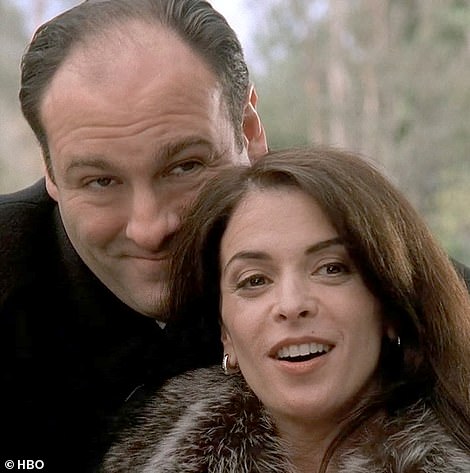 Annabella Sciorra cried as she took the stand in Harvey Weinstein’s New York trial on Thursday. She is pictured leaving the court room following her emotional five hour testimony. She appeared in The Sopranos (right) as Tony Soprano’s mistress

Addressing how victims remember things imperfectly, Dr Ziv said it was an attempt to ‘tolerate and survive’ the experience.

Dr Ziv said that victims try to rationalize what happened by saying that what happened was ‘just an aberration’ from the way the perpetrator normally behaves.

They hoped they could get back to a ‘baseline, pretend this never happened’.

Another myth was that victims could be judged by their behavior.

Dr Ziv said that during a sexual assault a victim may be ‘grossed out’ but their facial expressions might not show it.

After a rape, victims could ‘retreat, engage in promiscuity, drink, do drugs and burn themselves’.

Another myth was that victims reported their crime to the police and according to the Bureau of Justice sexual assault and rape are the ‘most under-reported crime’. 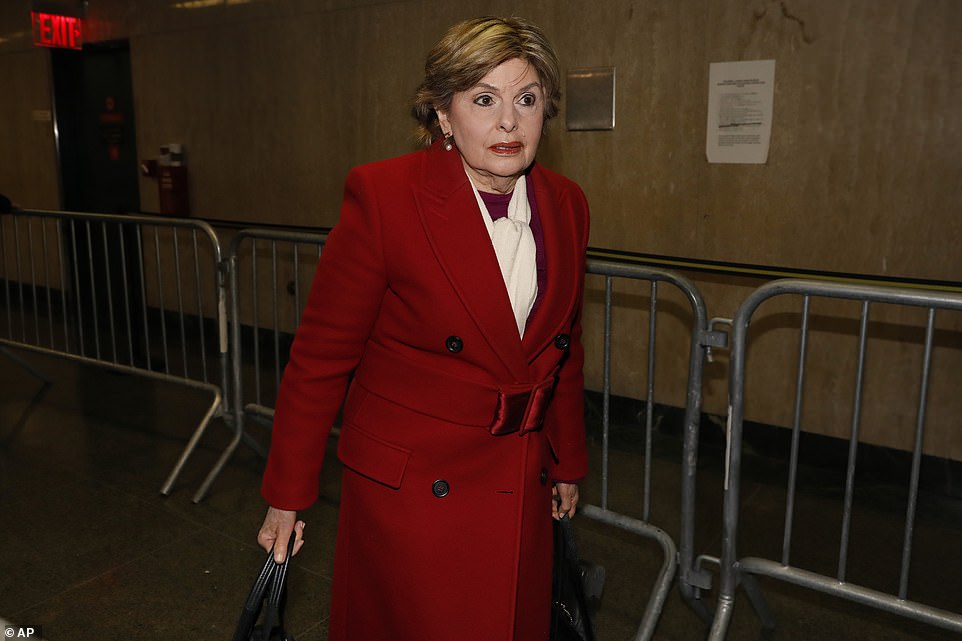 Gloria Allred, who is representing some of Weinstein’s victims, was among those in attendance at court on Friday

Victims were most likely to tell a friend then a spiritual adviser – and long after that were the police.

Earlier in the trial, it emerged that Weinstein complained to colleagues about Ronan Farrow’s investigation into him in the New Yorker, writing in a 2017 email: ‘This guy won’t stop’. 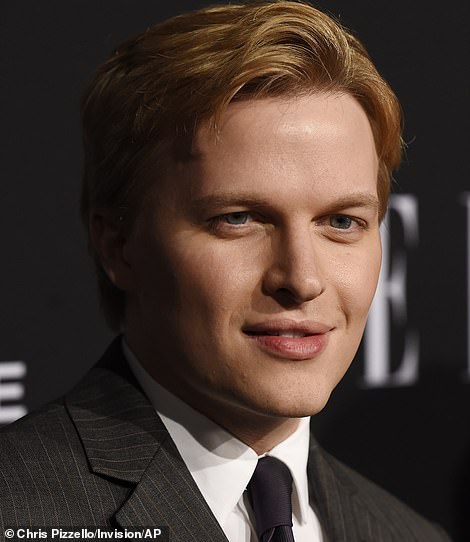 Farrow was working on an expose for months. He interviewed scores of actresses

The film producer wrote to his colleagues at The Weinstein Co that his encounter with Annabella Sciorra, who testified on Thursday that Weinstein raped her in the early 1990s, was ‘consensual’.

Sciorra had already been interviewed by Farrow and initially denied to him that she had been attacked.

She admitted after other women publicly accused Weinstein of abuse that she had lied and that he did ‘rape’ her.

He said that ‘she did Cop Land with us’, meaning Miramax, his production company.

Weinstein ordered his colleagues to ‘get emails’ about Sciorra and said: ‘This guy won’t stop’.

Farrow spoke to Sciorra in March 2017 and she initially denied anything happened with Weinstein but changed her mind and talked about the alleged rape in October that year.

Weinstein’s lawyers, during cross-examination on Thursday, asked her why then she had told a friend via text that she hoped he had a job for her years after the apparent rape.

Their line of questioning is consistent with what is widely believed to be their defense throughout; if Weinstein had attacked the women as violently as they say he did, why then did they continue to have contact with him and even ask him for work for years afterwards?

Many of the women who have spoken out to publicly accuse Weinstein of assault also say they they felt they had to comply with his alleged sexual demands or risk their careers.

He was the most powerful producer in Hollywood and had strong connections in all aspects of the entertainment industry, they claimed.

As the trial got underway on Thursday, Farrow released an audio tape of Weinstein asking an actress for a massage and telling her that she would risk losing ‘big opportunities’ if she did not trust him.

His lawyers have claimed throughout that he is the victim of an overzealous #MeToo movement and that all of the sex he has ever had with anyone has been consensual.