Harvey Weinstein victim Mimi Haleyi says she was ‘relieved’ the jury believed her at ‘terrifying’ rape trial and convicted him of sex assault as lawyer Gloria Allred urges women to come forward ahead L.A. case

One of the women Harvey Weinstein was found guilty of sexually assaulting at his historic rape trial on Monday has said she is ‘relieved’ the jury believed her.

Mimi Haleyi courageously testified at Weinstein’s trial about how he forcibly performed oral sex on her in 2006.

The jury convicted him of criminal sexual act in the first degree for it. It carries a potential sentence of up to 25 years behind bars.

On Tuesday, as Weinsten dodged jail in a hospital bed after spending the night there for ‘chest pains’ and ‘heart palpitations’, Mimi appeared on Good Morning America and CBS This Morning.

‘There was a huge sense of relief that the jury believed me and I was heard. I was just grateful that they got it. 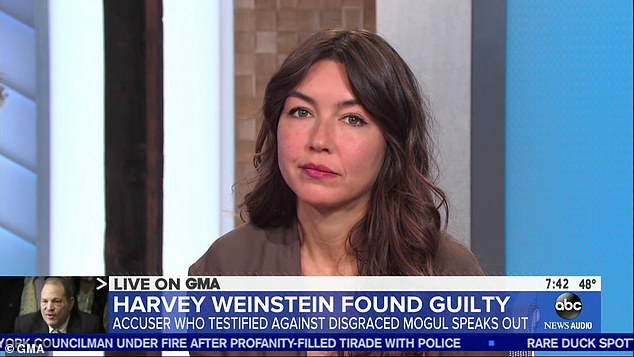 Mimi Haleyi, one of the women Weinstein was found guilty of assaulting, appeared on Good Morning America on Tuesday to say she felt relieved the jury believed her 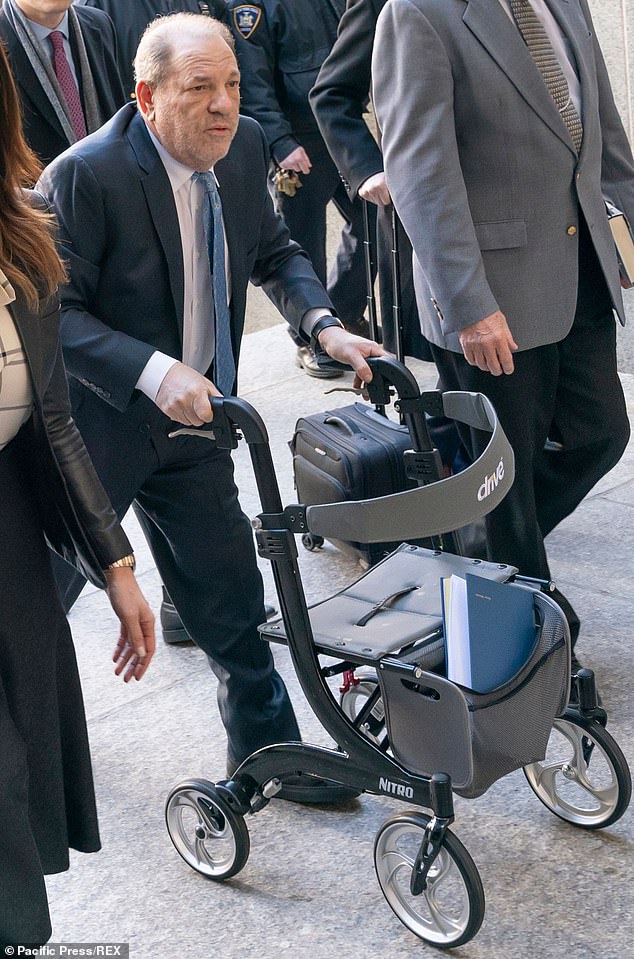 ‘It was terrifying. Terrifying. But after a lot of thought i just felt it was the right thing to do and something I wanted to follow through with so that’s why I did it,’ she said of her decision to speak at the trial.

She added that she thinks the entire trial and the verdict gives her ‘hope’.

‘I just feel like we’re being educated about the reality of sexual assault and sexual assault victims. A lot know their attacker and they have some sort of relation to that person and that brings with it a whole layer of emotional confusion that you need to process through.

‘That’s what we need to realize,’ she said.

Later, on CBS This Morning, she revealed she did not know which way the verdict would go.

‘I mean, I am still processing I think, but [it’s] just a relief. 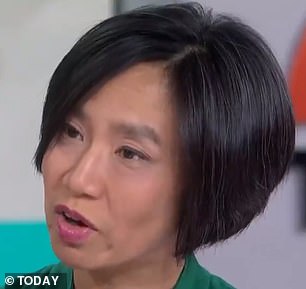 Rowena Chu, another of Weinstein’s accusers, appeared on Today to say she felt overwhelmed when she heard the verdict was guilty. Her claims, that he attacked her, never went to court. There are now 90 women who have accused him of misconduct; Monday’s verdict represents only two of them

‘I wasn’t sure what was going to be happen to be honest.

‘The statistics say most rapists walk, so I didn’t know which way it would go.

‘I’m just very relieved and grateful and happy that it feels like we’re making progress,’ she said.

She was joined by her lawyer, Gloria Allred, who commended her for her bravery.

‘Mimi had to face very intense cross-examination on the stand.

‘Hours and hours of cross-examination.

‘I want to say how proud I am of her and of Lauren Marie Young, who was one of the Molineux witnesses who also testified, and Annabella Sciorra who is really a role model in courage and very inspiring.

‘She did what she did… she testified, she made many sacrifices because it was in the interest of justice to do so,’ she said.

The jury was not asked to charge on Annabella’s story – that Weinstein raped her in the 1990s.

Instead, she had been called on to testify about it to demonstrate a pattern of predatory behavior to convict on a more serious charge, predatory sexual assault, which can carry a life sentence.

The jury acquitted Weinstein on two counts of predatory sexual assault but Allred said it was not a ‘reflection’ on Annabella or her story.

‘It’s a very high burden of proof. She told her truth. She refused to be intimidated and she was very authentic. Many people said she was an exceptional witness.

‘This is about the empowerment of women. Women refusing to stand silent when they have been the victims of violence.

‘Because of Mimi’s courage, he may never come out of prison,’ she said.

Rowena Chu, another Weinstein accuser who has spoken in the past about him allegedly assaulting her but whose claims have not been taken to court, told Today that she was ‘overwhelmed’ by the verdict and that she felt ‘incredibly sad’ for the women he has abused.

There are now 90 women who have accused him of misconduct.

Monday’s verdict represents only two of them.

Mimi said she intends to give a victim impact statement at his sentencing on March 11 but that she has not decided what she wants to say to him.

In the meantime, Gloria is urging any women who believe they are victims of Weinstein to come forward in order to testify at his L.A. trial.

Weinstein’s attorney said on Monday that he took the verdict ‘like a man’ and that he would continue to fight it. They immediately filed an appeal.

Within a few hours, he had been taken to a hospital in the city – instead of Rikers Island – and his other attorney revealed he’d cried out: ‘I’m innocent! I’m innocent! How can this happen in America?’

He will return to court on March 11 for his New York sentencing.

Now, attention is turning to the Los Angeles trial which may have a wider scope of women.