Headteacher ‘was worried about losing job’ before he hanged himself

‘The world wants me to fail’: Strict headteacher, 37, of six academies who banned pupils wearing lipstick and fake tan ‘was worried about losing his job’ before he hanged himself at home 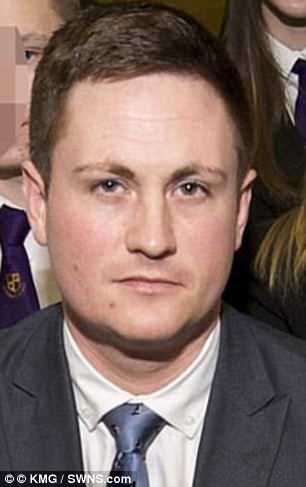 Gary Vyse, 37, was three times over the drink drive limit and suffering from depression when he was found hanged at his home on Monday February 12 this year.

An inspirational super headteacher hanged himself after sending an emotional message to a close friend saying: ‘The world wants me to fail’, an inquest heard.

Gary Vyse, 37, was three times over the drink drive limit and suffering from depression when he was found dead at his home on Monday February 12 this year.

Mr Vyse was considered a leading light in his role running six academies as chief executive of The Williamson Trust in Medway, Kent and head of the Hundred Hoo Academy.

He hit the headlines when he banned fake tan and lipstick and was described by colleagues as an ‘inspiration’ and a mentor to many younger teachers.

But privately he was prescribed with antidepressants and had problems with heavy drinking, the inquest into his death heard.

At a resumed inquest yesterday, a coroner heard Mr Vyse’s body was found by his friend Michaela Bartlett at his home address in Rochester, Kent hanging from the first floor balcony.

Detective Sergeant Debra Cummings told the coroner on the day of his suicide Mr Vyse sent ‘messages of an emotional nature’ to Ms Bartlett, who was described in the inquest as Mr Vyse’s girlfriend – but this was disputed by a family member at the inquest. 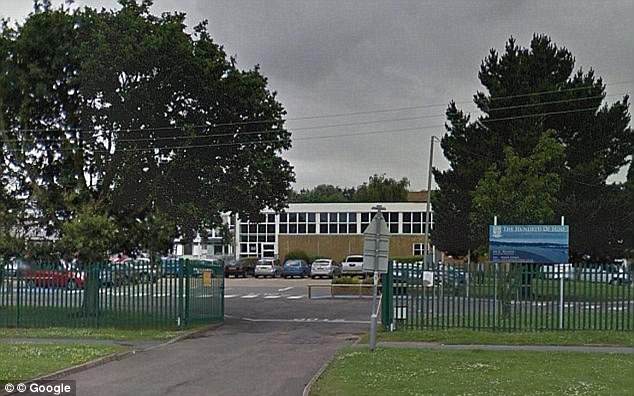 Mr Vyse was considered a leading light in his role running six academies as chief executive of The Williamson Trust in Medway, Kent and head of the Hundred Hoo Academy.

She told the hearing: ‘One of the messages stated he was feeling anxious and sad, was not enjoying his job and felt people wanted him to fail.’

He also told her he feared he was about to be suspended from work and was due to meet bosses at the Trust over a possible disciplinary matter. 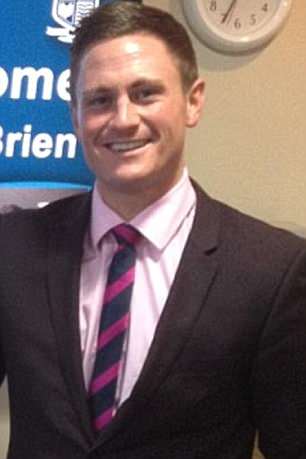 That evening his friend went to the cinema with her sister-in-law at 9.10pm and thought it was strange she had not heard from him or replied to her messages.

She went to his home address and let herself in with her key, found him and called an ambulance at 9.25pm.

She was found ‘crying and screaming’ in the street by Mr Vyse’s neighbour Brian who was walking his dog.

The ambulance arrived at 9.32pm and the paramedics attempted to resuscitate Mr Vyse, but he was pronounced dead at 9.41pm.

No suicide note was found at the property but a number of Mr Vyse’s electronic items such as a iPad were found on the table, along with some papers – and elsewhere in the property three packets of Fluoxetine, a drug used to treat depression.

The coroner asked the officer about the ‘tone’ of the messages Mr Vyse sent Michaela Bartlett prior to his death.

She said: ‘The overriding tone was that Mr Vyse was feeling fairly depressed, some of the messages were not clear but they were emotional.

‘In one he said the ‘world wanted him to fail’ and he was worried about being a ‘burden’.’

He also made comments saying ‘what will be will be’ and ‘I will love you with my last breathe’.

She added: ‘They gave the impression he was saying goodbye.’ 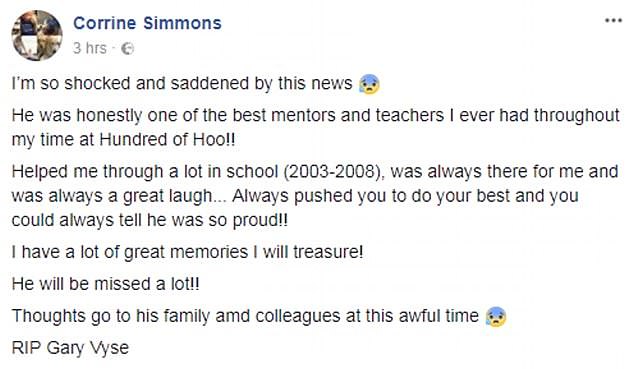 The coroner read out a report from Mr Vyse’s GP doctor Dr Murphy who confirmed Mr Vyse was being prescribed Fluoxetine to deal with depression and was also undergoing CBT.

His first contact with him was in 2016 when Mr Vyse told his GP he was ‘stressed at work, not sleeping and wanted to go on anti-depressants.’

At a later appointment on October 26 2017 Mr Vyse told Dr Murphy he was drinking a bottle of wine a night, was feeling low, was self-harming but would not consider suicide because of his two young children.

Dr Murphy last had contact with Mr Vyse on November 2017 when Mr Vyse wanted to rebook an appointment.

The cause of death was given as 1A suspension.

A toxicologist report showed Mr Vyse had 247 milligrams per 100 millilitres of blood in his system – which is three times the legal drink drive limit.

Assistant coroner Katrina Hepburn told the inquest in Maidstone, Kent: ‘In December 2017 Mr Vyse stayed with his parents for a period of time and references having problems with work, relationship problems and also heavy drinking.’

She ruled a conclusion of suicide and gave condolences to the family.

Gary’s mum, dad, brother and sister-in-law all attended the inquest and did not wish to speak to the media.

The 37-year-old was considered a leading light in his role running six academies as chief executive of The Williamson Trust in Medway, Kent.

Mr Vyse hit the headlines in 2016 when he criticised parents for allowing pupils at the Hundred Of Hoo Academy to wear fake tan, heavy lipstick and foundation.

The head teacher told parents and pupils ‘school is not a fashion parade’.

But he was reportedly banned from driving the same year when he was convicted for drink driving.

For confidential support call the Samaritans on 116123 or see www.samaritans.org.