Heart-breaking pictures of owners during their pet’s final moments

These heart-breaking photos called ‘Last Moments’ will bring a tear to the eye of any pet owner.

The series explores the intimacy of the human-animal bond, specifically at the end of a pet’s life, before and after the passing at home with their owner.

Taken over the course of a year in 2017 to 2018, the photographs were made with the co-operation of the dog owners in the Tampa bay area of Florida who were aided by veterinarians from ‘Lap of Love’, an at-home pet euthanasia service that allows for a peaceful passing at home.

Photographer Ross Taylor’s inspiration came after being ‘profoundly moved’ by seeing a friend struggle with the deterioration of her own pet’s health and her decision to use euthanasia.

Taylor is a Denver-based freelance photographer and filmmaker and was nominated for a Pulitzer Prize for this collection of moving images. 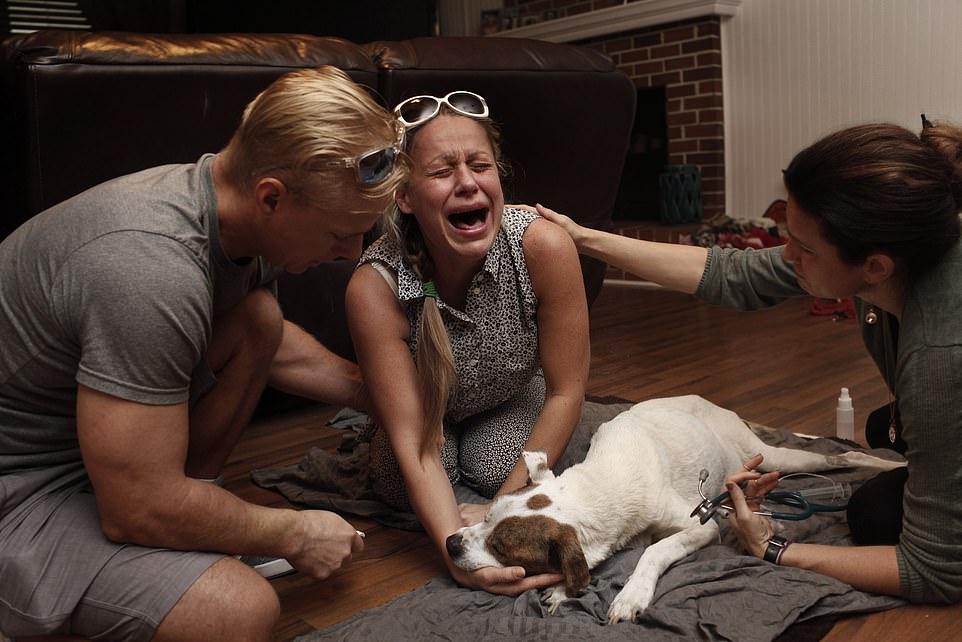 Olesya Lykovi cries out in anguish, moments after the death of her dog, Sam. Moments before, she looked at Dr Dani McVety (right) and asked: ‘Is he gone?’, Dani nodded and said: ‘He has his wings now’ 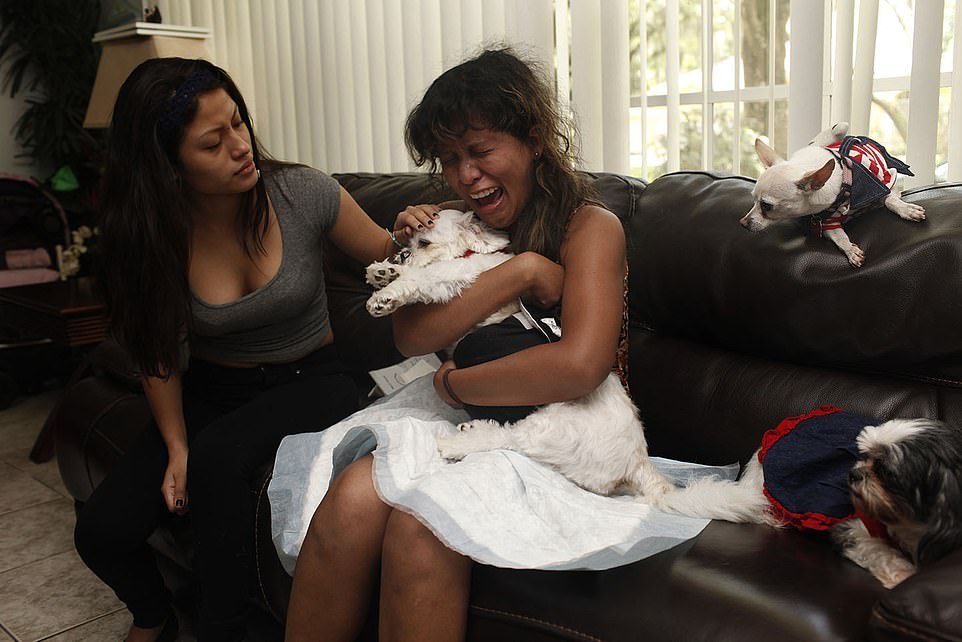 ‘I tried to do more, I tried to do all I can. But they said there’s nothing more I can do’, Kiara Manrique said while weeping at the loss of her dog. Her sister, Kimberly (left), and veterinarian Nil Wilkins (out of picture) who later reached out to comfort her as her two other dogs look on 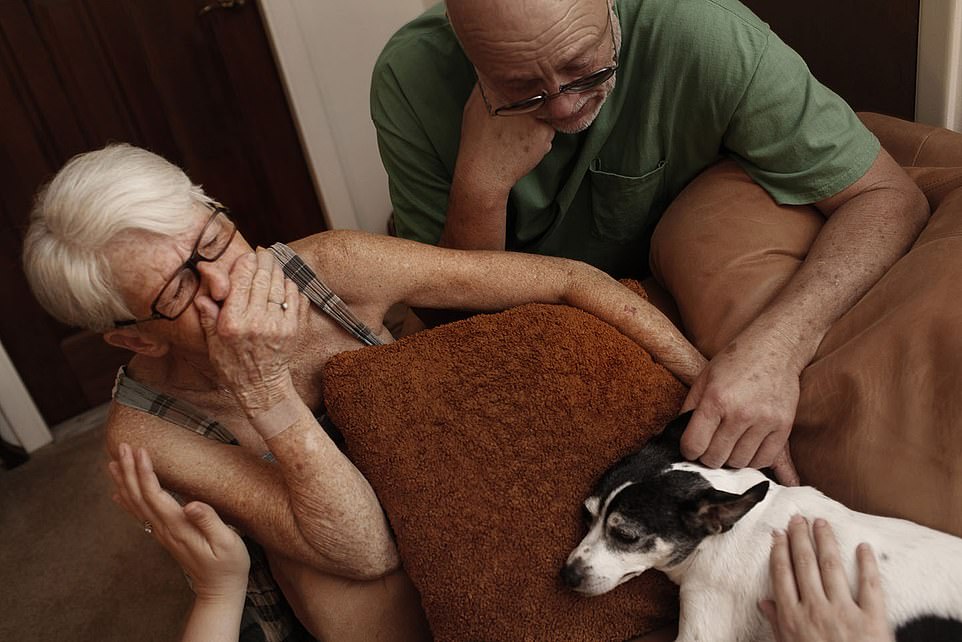 Marquita Leibe paced back and forth shortly before bending down to be near her dog, Daisy, minutes before she is put to sleep. Shortly after her husband Donald (right) stepped outside to compose himself, overwhelmed with grief As the sun sets during a late summer evening, Kai, (right) senses something is wrong with fellow dog, Asia. He dutifully follows behind Rob Peterson and Dr Dani McVety. Soon, with the help of Carrie, Rob’s sister, Asia will be buried on the farm 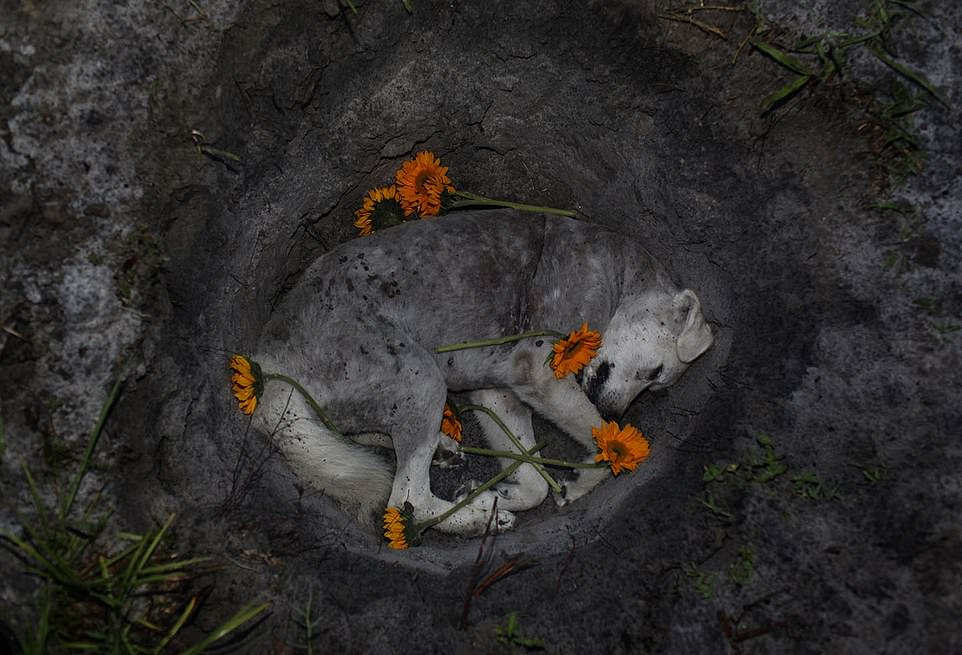 Carrie Peterson dropped sunflowers over the grave of her dog, Asia, on the farm. ‘The smell of freshly turned earth is what I remember and how peaceful Asia looked within it’, photographer Ross Taylor said 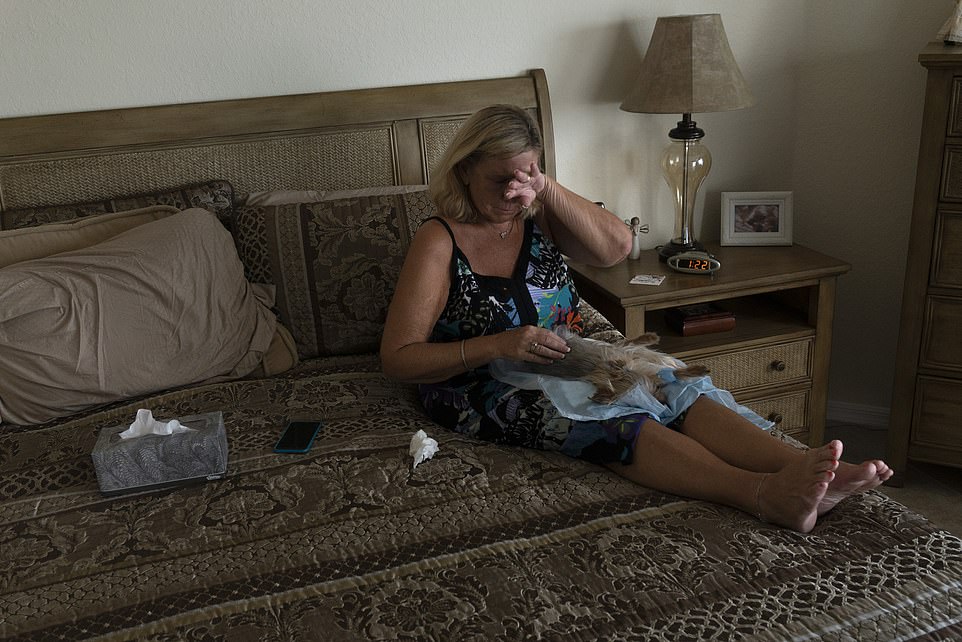 Leigh Zahn sits alone on her bed as she fights back tears and lays with her dog, Spencer, in her lap one final time. This moving image was taken just moments after Spencer passed away 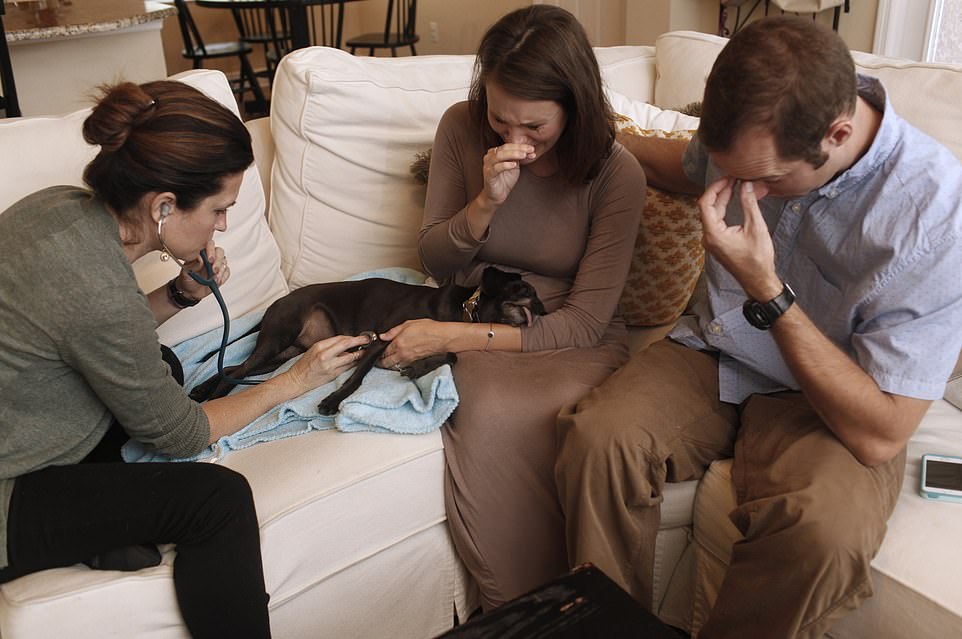 ‘Coco was there for me when he was on deployment’, said Rebecca Cassity, as she fights back tears. Her husband, Drew, was in the military. Dr McVety reassures her with a hug and consoling words: ‘This is better treatment than any one of us would get’ 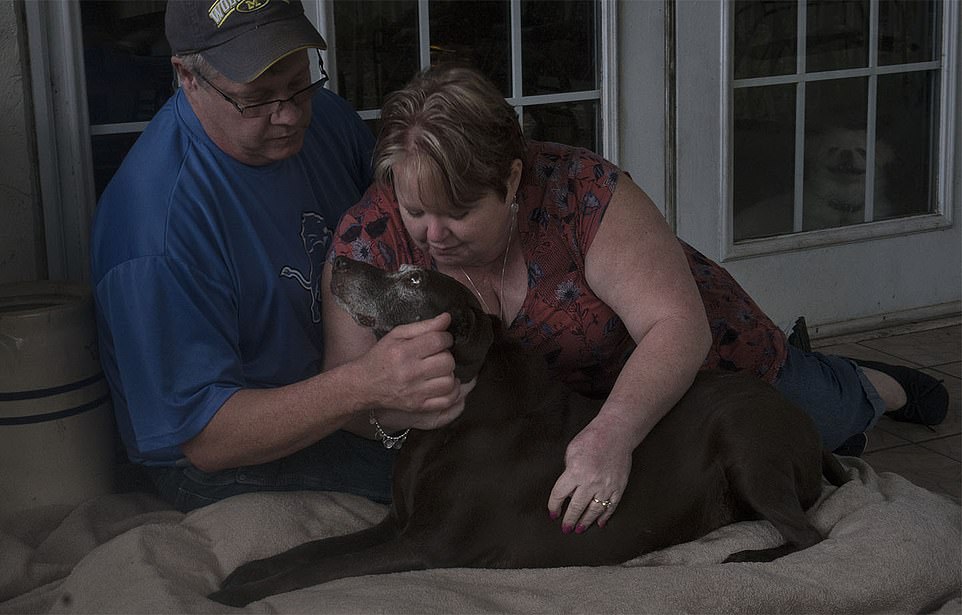 Dog Heidi looked up at Bob Lutz moments before she was euthanized due to recent substantial declines in health. Bob’s wife, Cindy, is seen here (right) watched by their other dog, Winnie, through the glass of the white door behind them 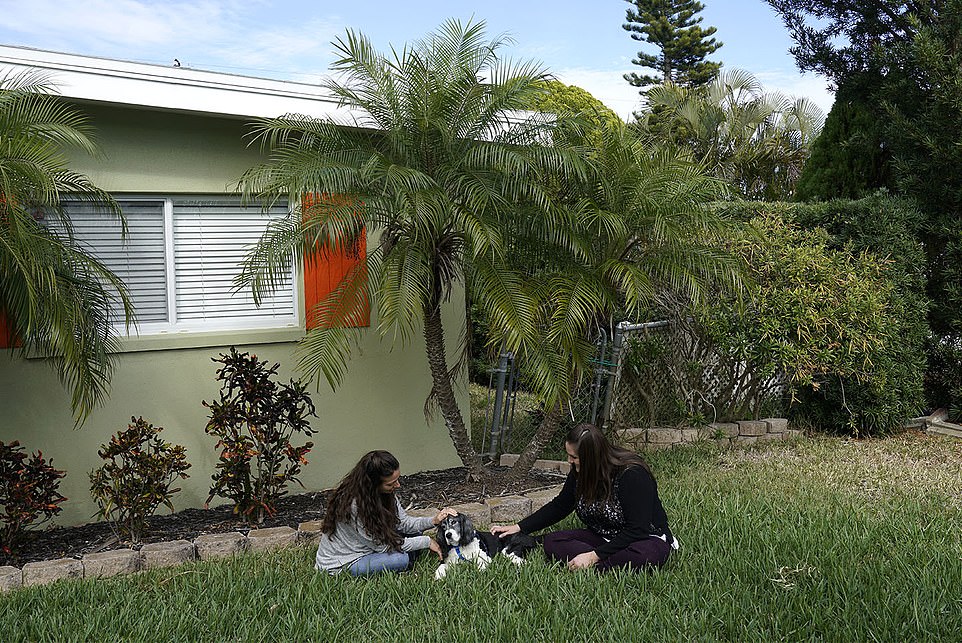 Darcy Jones (left) speaks with Dr Loren Gassler about her dog, Alli, 15, who had some balancing issues and was struggling with a diagnosis of cancer. Dr Gassler was performing a hospice visit for Jones, to offer some suggestions on how best to handle the remaining time they would have together. ‘Dr Gassler, and so many others like her, are amazing at what they do and help the painful transition daily, without drawing attention to themselves. They have my respect’, said photographer Ross Taylor 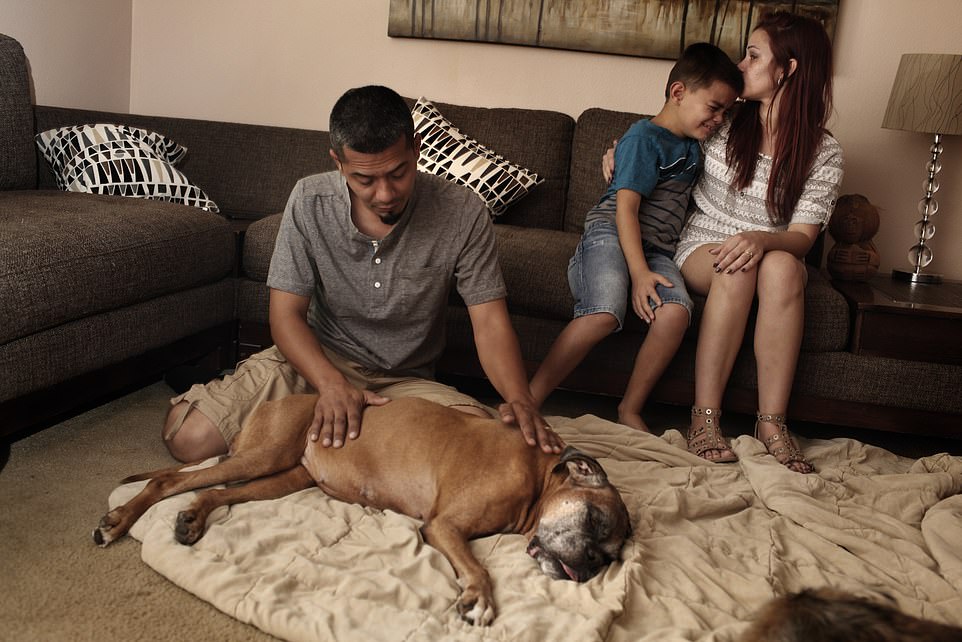 Vanessa Gangadyal consoles her son, eight-year-old Ian, while her husband, Michael Gangadyal, pets their dog, Ally, shortly after its passing. Founded by Dani McVety, the organization, Lap of Love, has been working with Caring Pathways to provide a peaceful passing ‘at home’ euthanasia service 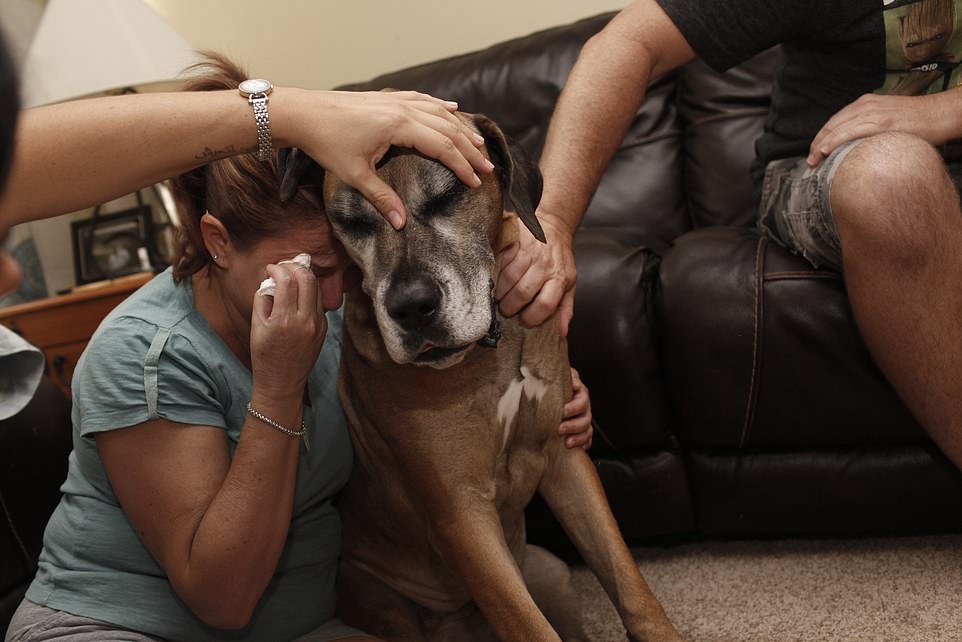 Wendy Lehr cuddled beside her dog, Mimosa, shortly after she passed away, surrounded by family members. Taylor expresses utmost gratitude for those working at Lap of Love and Caring Pathways, adding: ‘It couldn’t be done without their willingness to participate and belief in the project… They have my respect’