Passengers arriving into Heathrow Airport this morning faced scenes of total chaos as travellers fumed over queues of people into the ‘thousands’, claiming the airport had a ‘total lack of respect for travellers’.

Queues of three hours have been reported this morning, with very little signs of social distancing.

The delays have also caused a backlog at baggage collection, meaning some people have had to search through groups of luggage packed together in-between the operating carousels.

The chaos is reportedly being caused by an IT outage at the airport leaving hundreds stranded in the underpass at Terminal 2.

Passengers have been queuing for three hours this morning at Border Control with Heathrow Airport admitting that wait times are at ‘unacceptable levels’ via its Twitter account. Young families have been hit worst because they can’t use e-gates 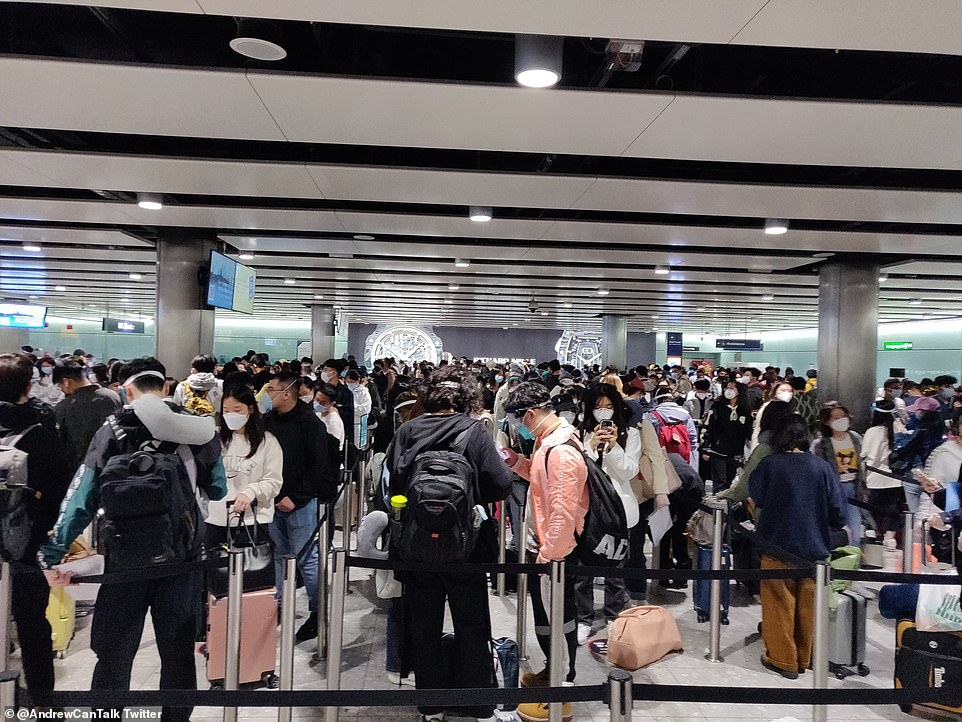 Passengers queue in their ‘thousands’ with minimal social distancing at border control, as they wait to prove their Covid travel status before entering the UK. Some have counted just six processing officers and several closed customer counters 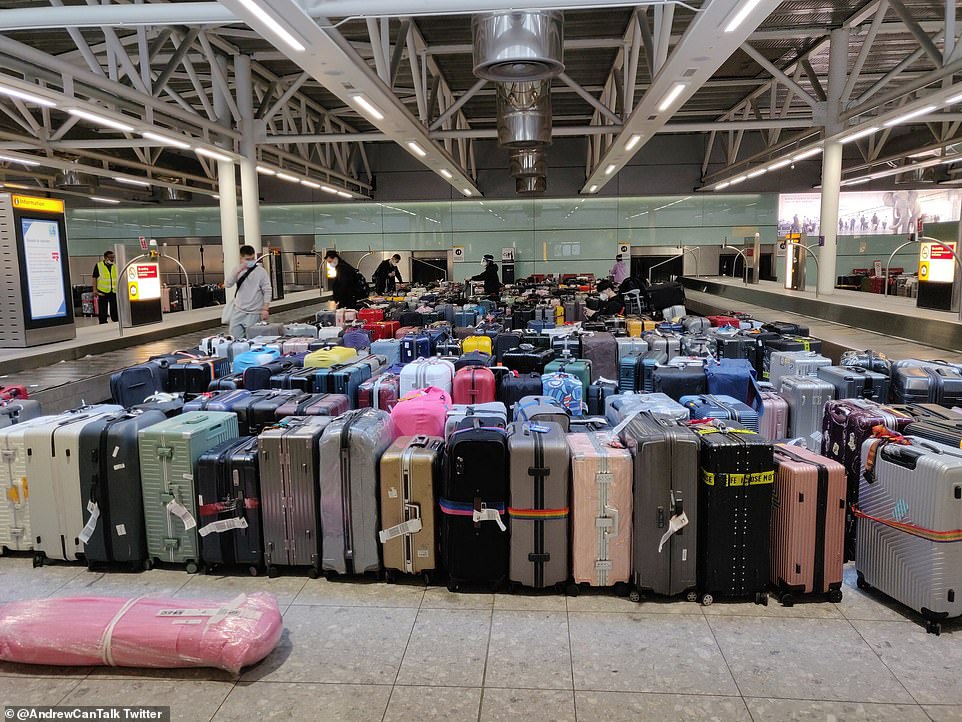 Due to the extensive queues, masses of luggage has been grouped together for people to sift through once they’ve made it through the border control as the baggage handlers try to keep up with the constant stream of inbound flights to Heathrow

Disgruntled passengers took to social media to share their frustrations with one claiming queues for immigration checks were ‘one kilometer’ long.

Another traveller said their delayed arrival to the UK began before border control, with a 30-minute delay for a bus transfer from the aircraft.

Whilst a third arrival claimed she’d been waiting for 2.5 hours at Heathrow, compared to the 5 seconds it took her to pass through passport control at Dubai airport.

The news comes amidst continuing chaos at airports due to Covid travel rules and reported staff shortages for UK Border Control. 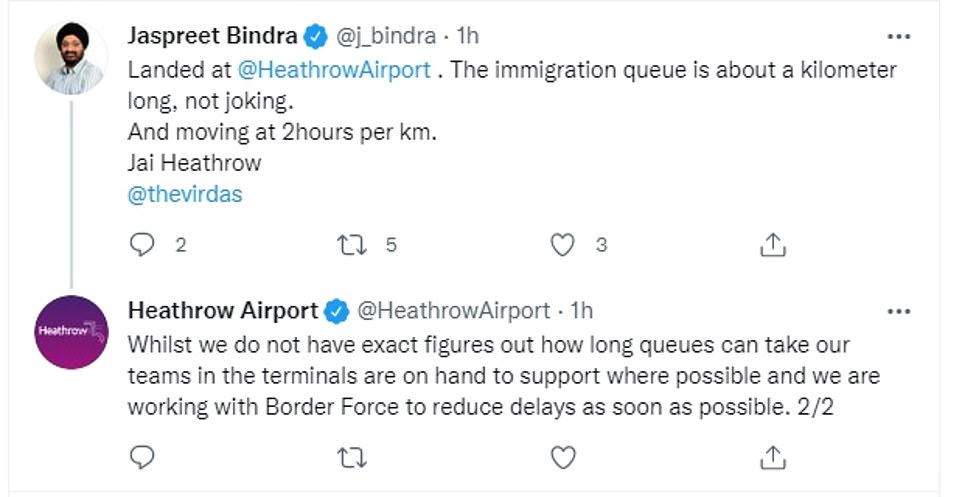 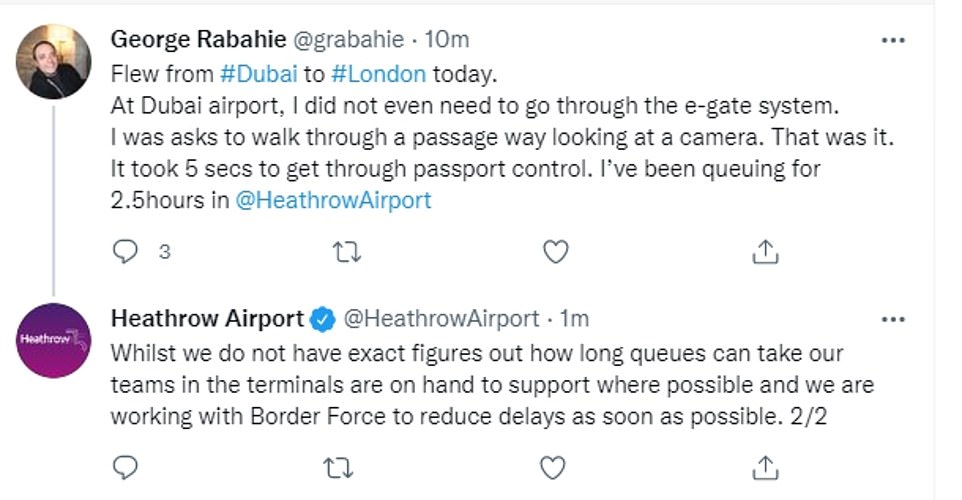 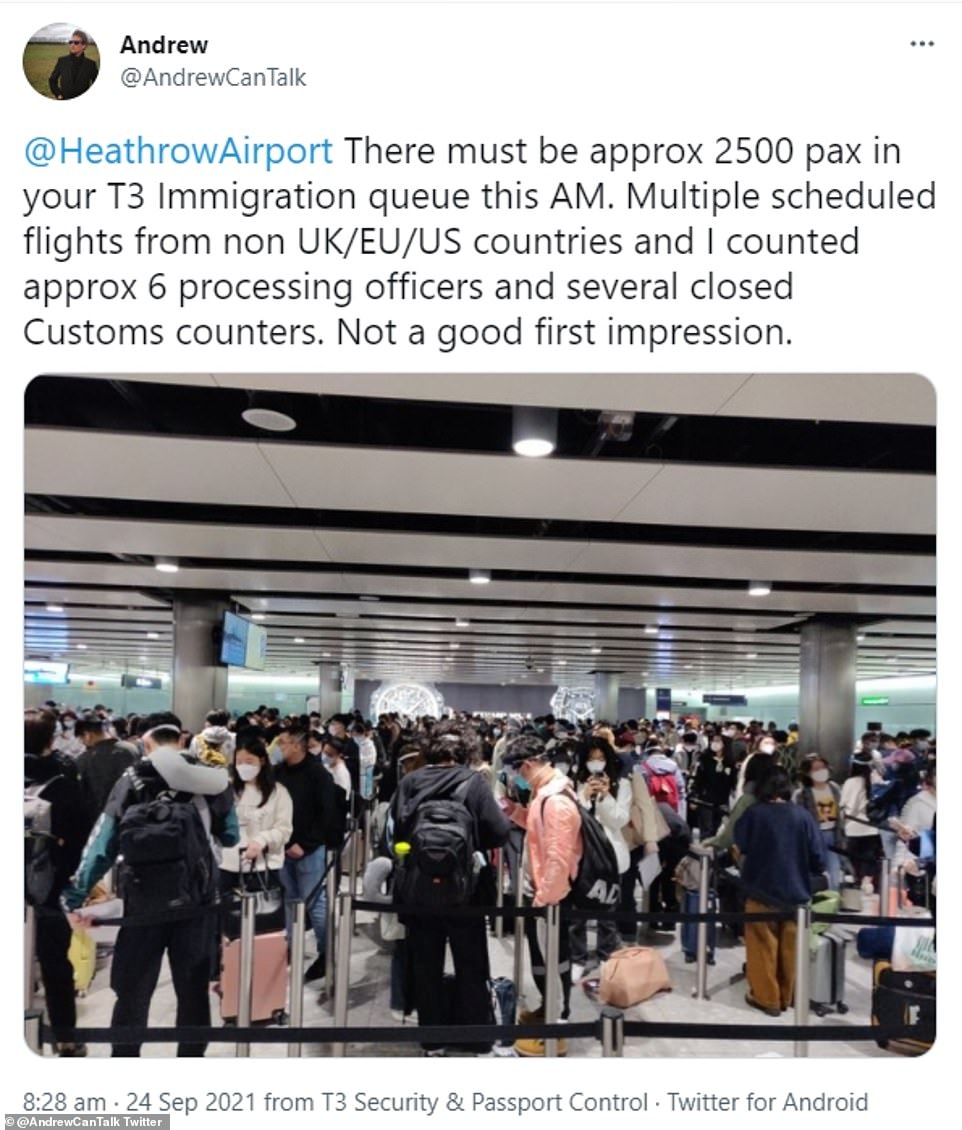 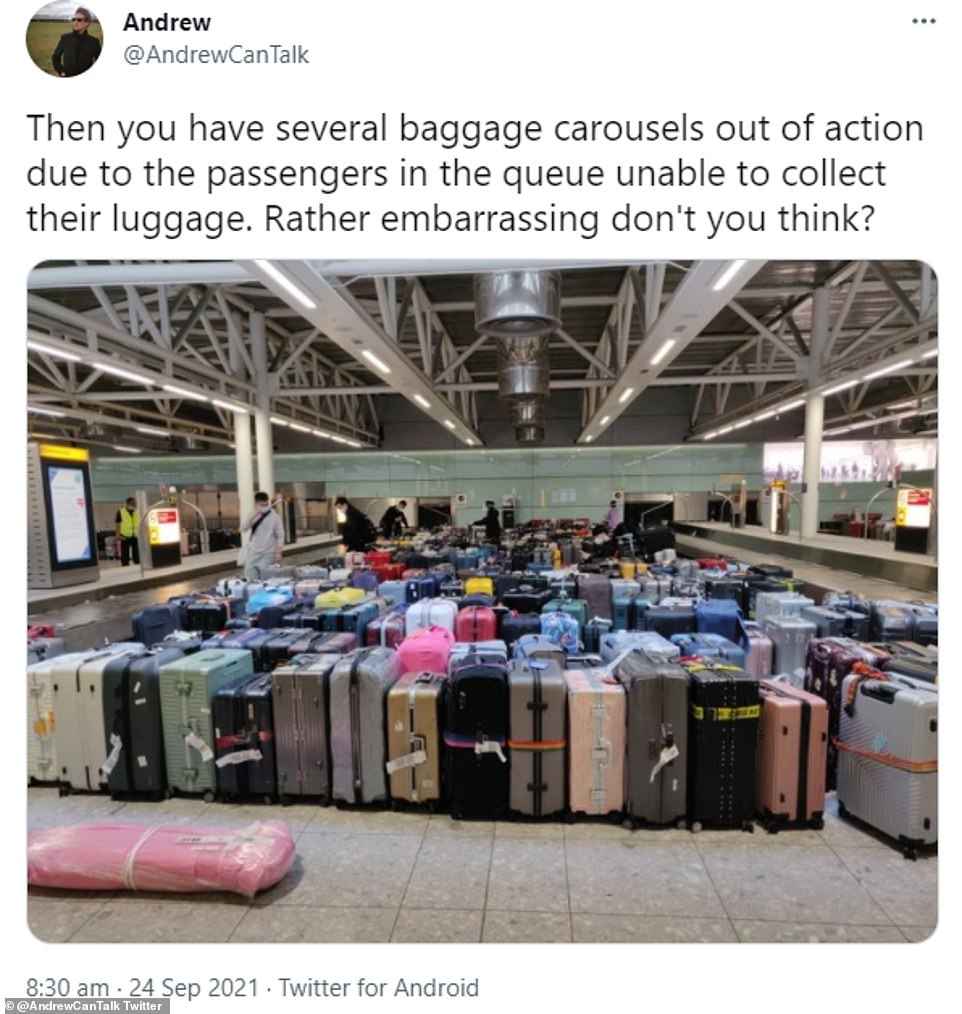 Twitter has been awash with comments and criticisms directed at Heathrow and Border Control as passengers are forced to queue for three hours. One passenger claimed that the queue stretched for a kilometer

As a result, some families have been worst hit because they are unable to use the passport e-gates.

Heathrow Airport has responded to travellers on Twitter this morning saying: ‘Queue times are at unacceptable levels. Border Force are working to process passengers and we have called on the UK Government to address the problem as a matter of urgency, we do appreciate your patience.’

They added: ‘Whilst we do not have exact figures out how long queues can take our teams in the terminals are on hand to support where possible and we are working with Border Force to reduce delays as soon as possible’.

Heathrow’s summer of queuing chaos: So when WILL the government get a grip?

May 17 – Passengers flying into the UK faced ‘bedlam’ at the border with some facing a three hour wait at the Heathrow passport gates. Travellers told MailOnline how they were ‘terrified of catching Covid’ while being crammed into the airport’s border hall this morning.

July 20 – 90-minute queues were seen at arrivals after the government failed to update Passenger Locator Forms ahead of its ‘Freedom Day’ rule changes – resulting in double-jabbed Britons being rejected at e-gates.

August 2 – Queues of passengers stretched the entire length of Terminal 5. Officials again blamed staff having to self-isolate. A spokesman quoted figures showing that one in four Border Force guards were reported to be off sick with Covid or self-isolating.

August 29 – Three-hour waits were reported at passport control. A day later the Home Office risked fury as it said passengers ‘need to accept’ the risk of delays at peak times.

MailOnline has contacted Heathrow Airport and the Home Office for comment.