A father of four has described the moment he rushed onto the family’s burning bus home to save his two children after a propane explosion during a cross country trip.

Former Air Force intelligence officer, Kyle Copeland, 33, has released pictures of the harrowing aftermath of the explosion on December 26 that left him, and his two children, Krew, 4, and daughter Pepper, 12, with horrific third-degree burns.

While all three escaped with their lives thanks to Copeland’s quick response, which he described as ‘looking right into hell’, they are still recovering from the explosion in a hospital burns unit in Las Vegas.

The family are now using their traumatic experience to raise awareness about using propane gas in mobile homes.

‘Watching my children suffer physically is the hardest thing I’ve ever done, deep heartache, but we choose to embrace this trial fully and take responsibility for our experience of life,’ Kyle said. 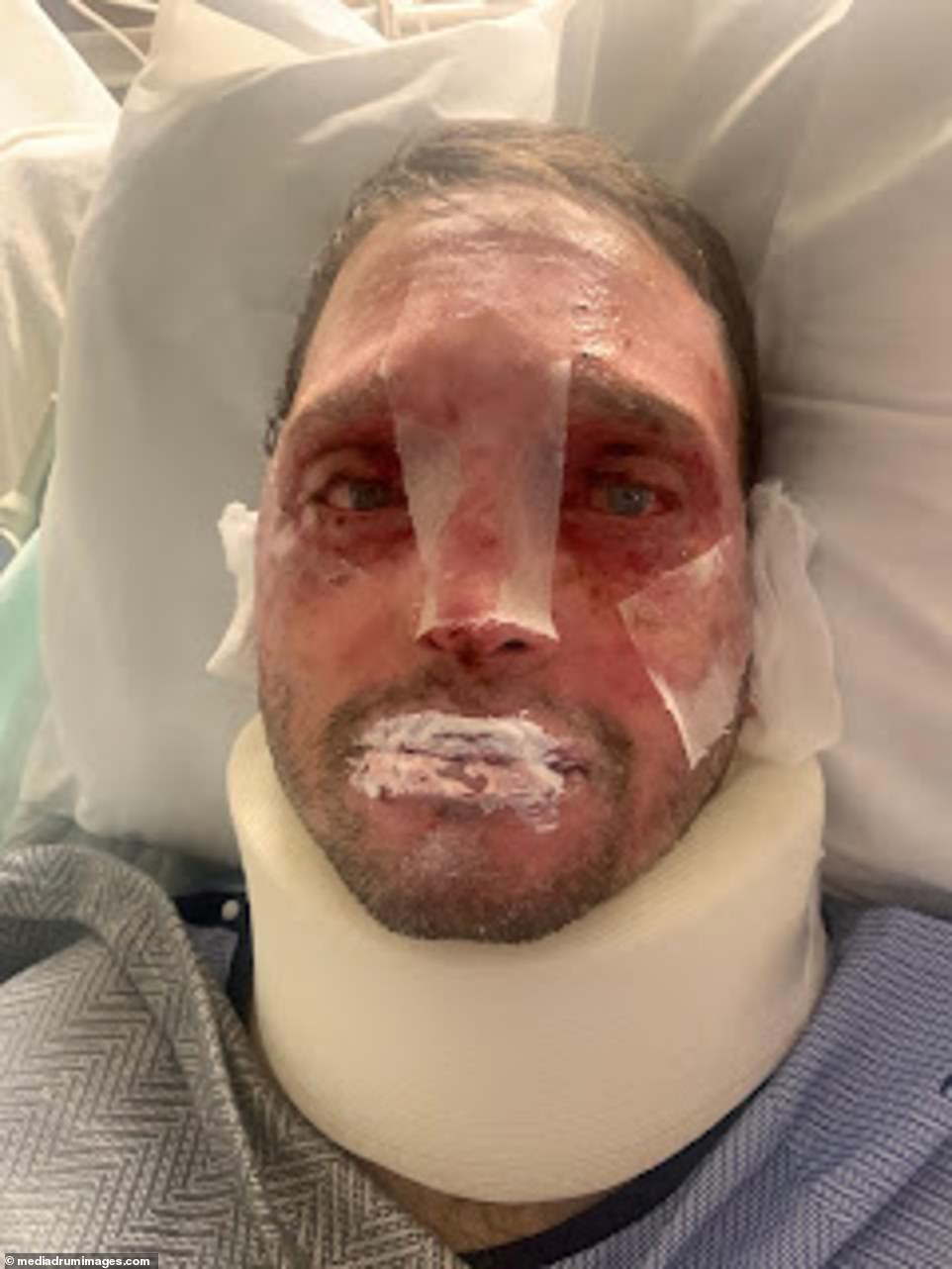 Kyle Copeland (pictured), 33, a former Air Force intelligence officer, suffered burns on his face and body after he rushed into his burning bus home to save his children when their propane tank suddenly exploded on December 26 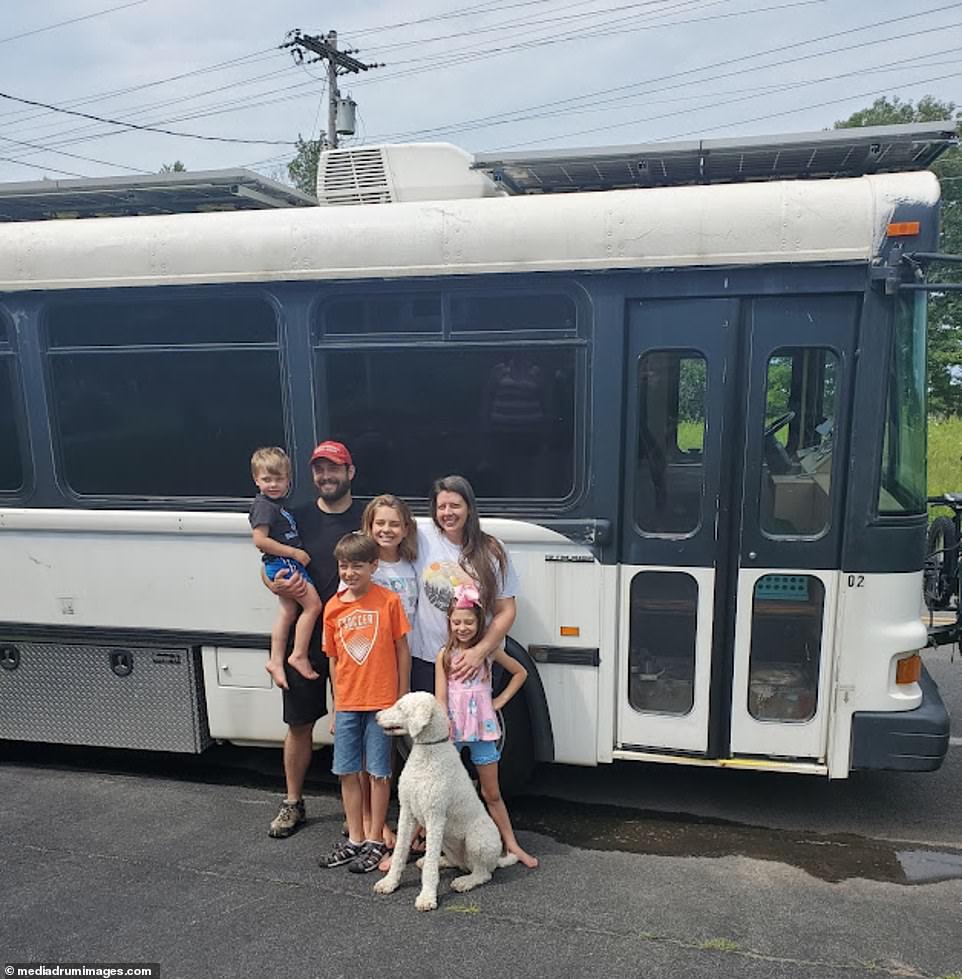 The Copelands were in the middle of a cross country trip when they stopped in Veyo, Utah for the holidays. Copeland and his wife, Whitney, 33, started a bus life and homeschooling adventure with their four children in August last year 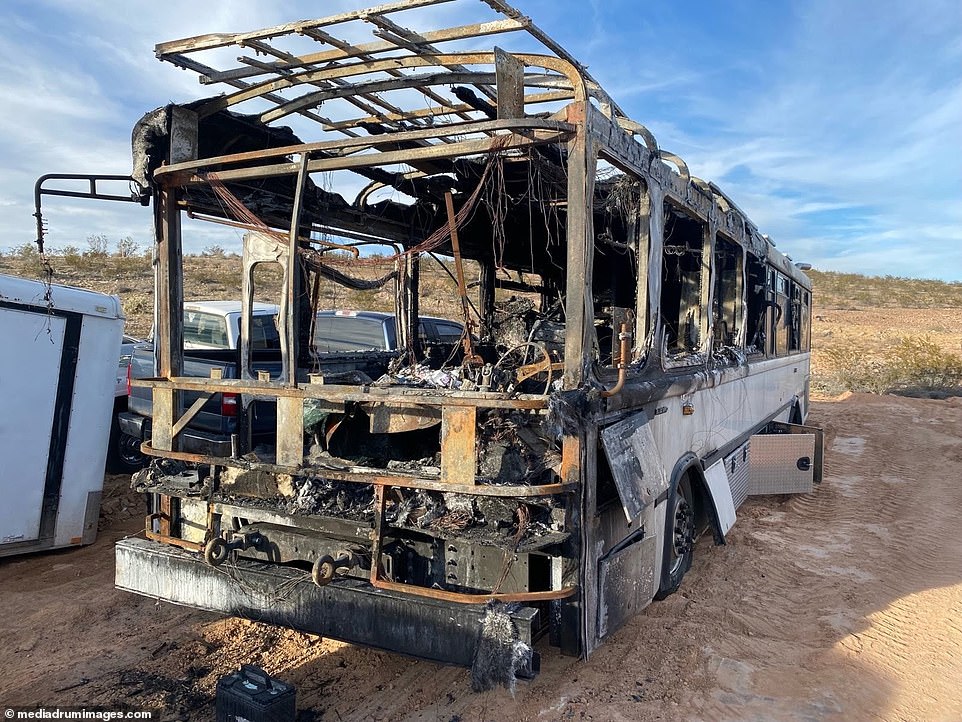 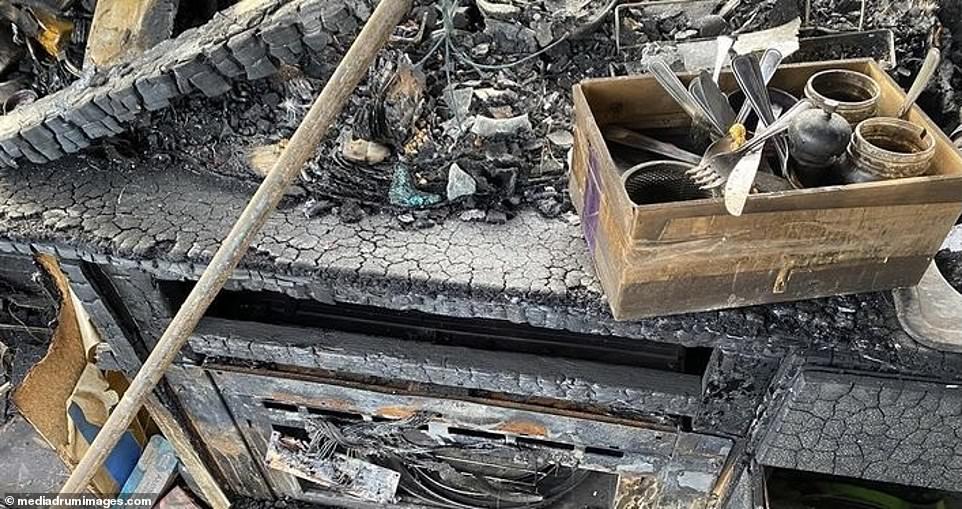 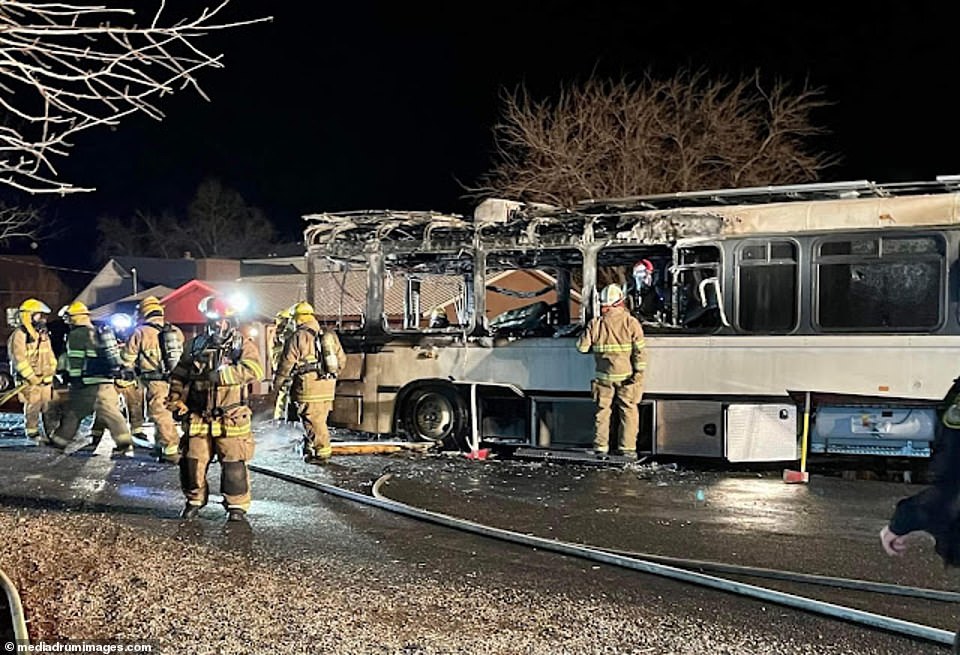 Copeland and his wife, Whitney, 33, started a bus life and homeschooling adventure with their four children in August, but were left injured and homeless after the explosion just four months later left the homeless.

The couple was attaching a trailer outside when their third child, Emree, 6, got off the bus and said the propane heater was making noises.

It was at that moment that the bus caught fire and moments later the explosion occurred.

The Copeland family’s bus erupted into a fireball with three of their four children inside.

The flames could be seen three miles away from the explosion site in the small town of Veyo, Utah.

Kade, 10, managed to jump out of the window head-first to escape harm.

Pepper, the eldest sibling, suffered burns on over 52 percent of her body. She has endured 32 surgeries so far.

Krew is still recovering from burns on his hands, arms, and face in the temporary home the family are staying in close to the specialist burns unit at the University Medical Center in Las Vegas.

The middle two children escaped serious physical injuries and went to stay with family as the rest of the family recovers in the hospital.

Copeland was intubated and sedated for four days before he was able to talk to his wife.

‘Kyle is healing. His hands and neck accepted the grafts taken from his thigh and the doctors are very happy with how they look,’ Whitney said. Kyle Copeland (right) and wife Whitney are using the horrible experience as a way to help others, sharing their story in hopes of raise awareness about the use of propane gas in mobile homes 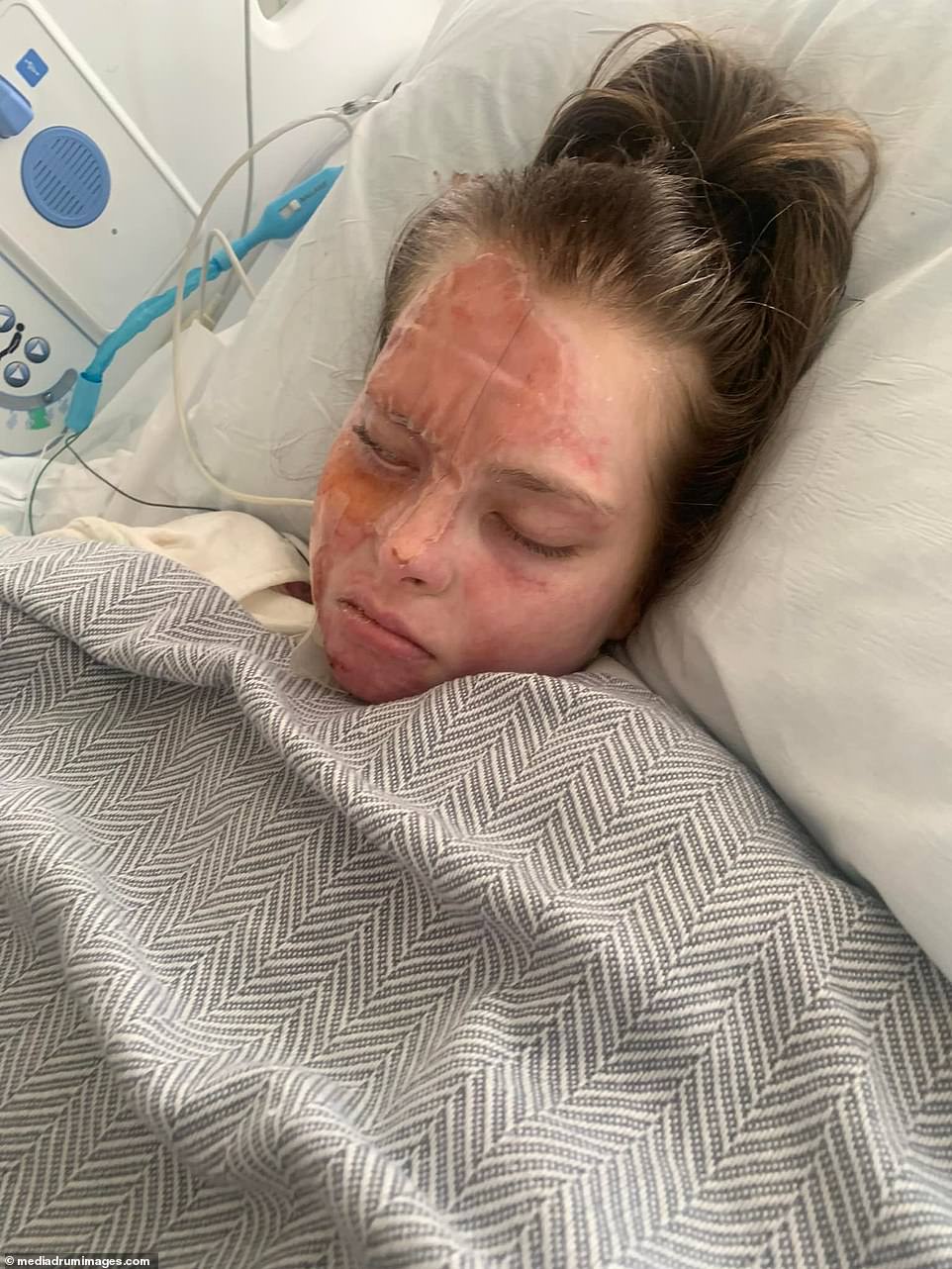 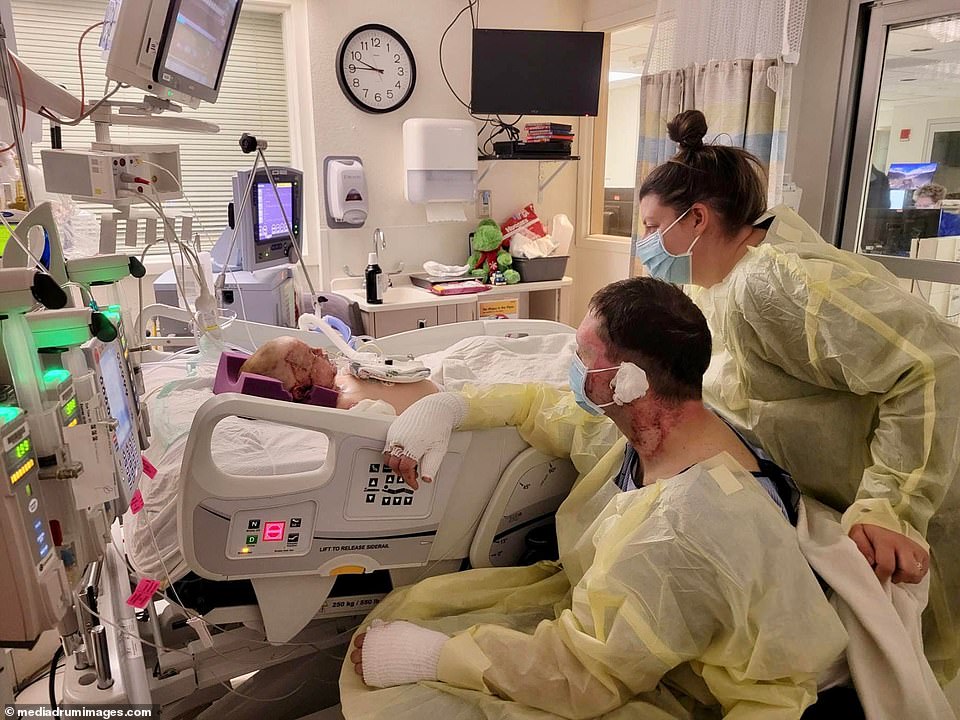 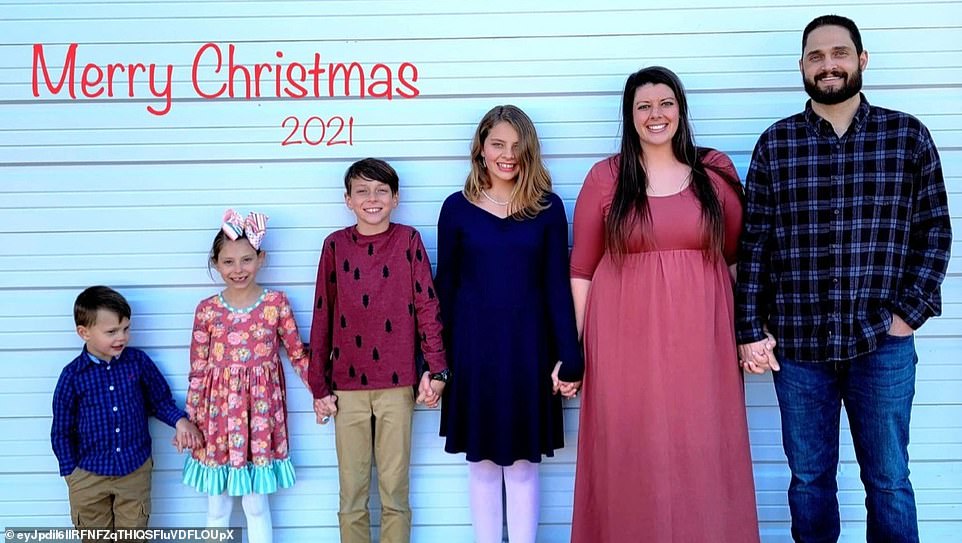 The horrible incident happened after the family celebrated Christmas. (L-R): Krew, Emree, Kade, Pepper, Whitney and Kyle. Emree, 6, had stepped out the vehicle moments before the explosion, and Kade (10) was able to jump out a window to safety 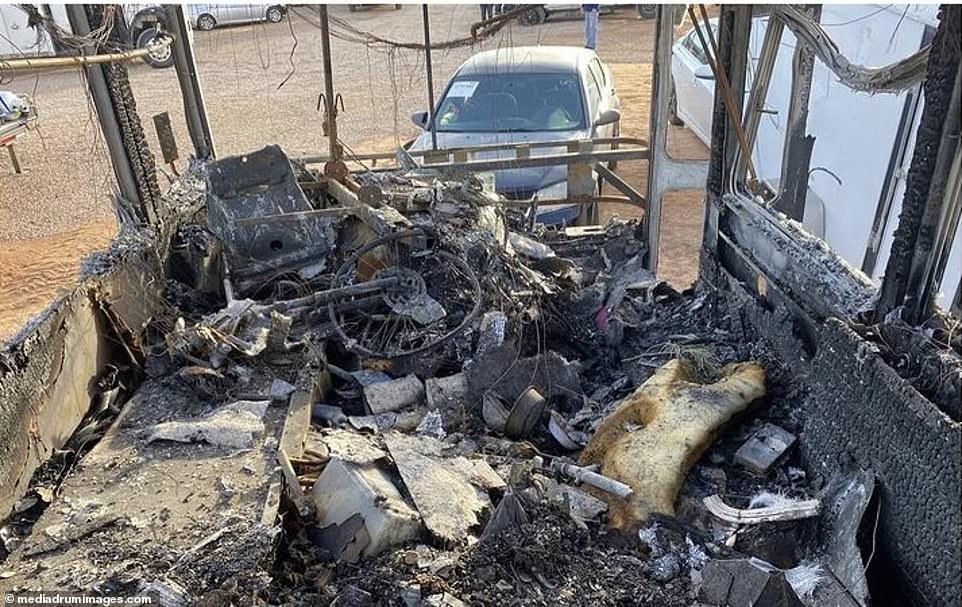 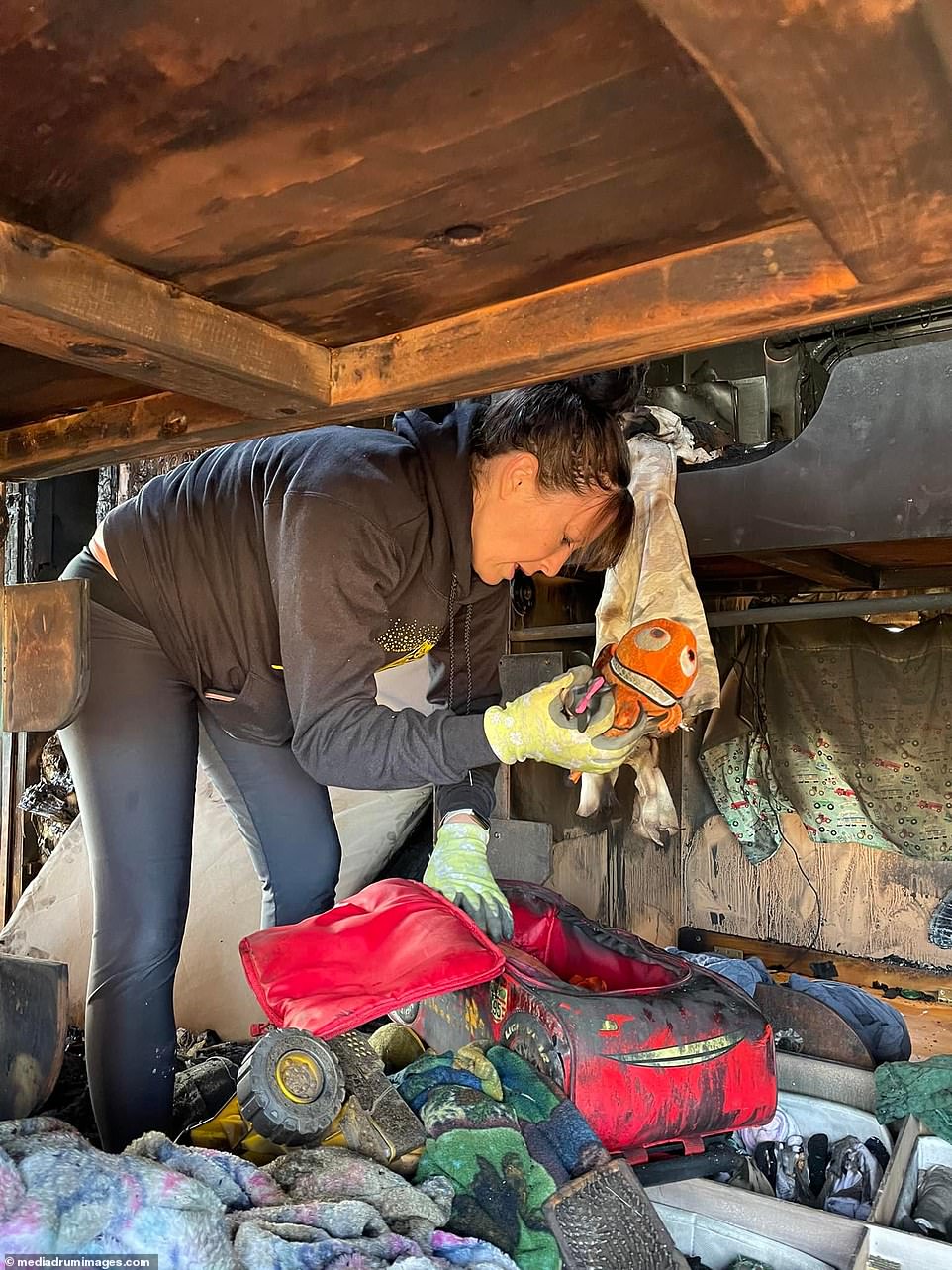 ‘He has follow up appointments now to treat the burns around his eyes. My Kyle and my children’s faces and bodies will most likely not be the same.

‘I will forever be grateful that Kyle made it to the bus first,’ she added.

‘He says he knew he couldn’t let them down and he had to get them out [or] die trying. Kyle scooped Krew into his arms. Then turned to Pepper, who was stunned.

‘When he grabbed onto her she was very reluctant and started pushing against him. She thought Kade was still inside,’ Whitney noted.

‘Kyle then put her in the tightest head lock he could and turned towards the flames. Then it was as if everything stopped and time froze.’

Whitney suffered burns on her hands from helping her husband and children get out of the RV and from putting out the flames on Pepper.

She pulled her injured family away from the burning vehicle and just a minute later it exploded. 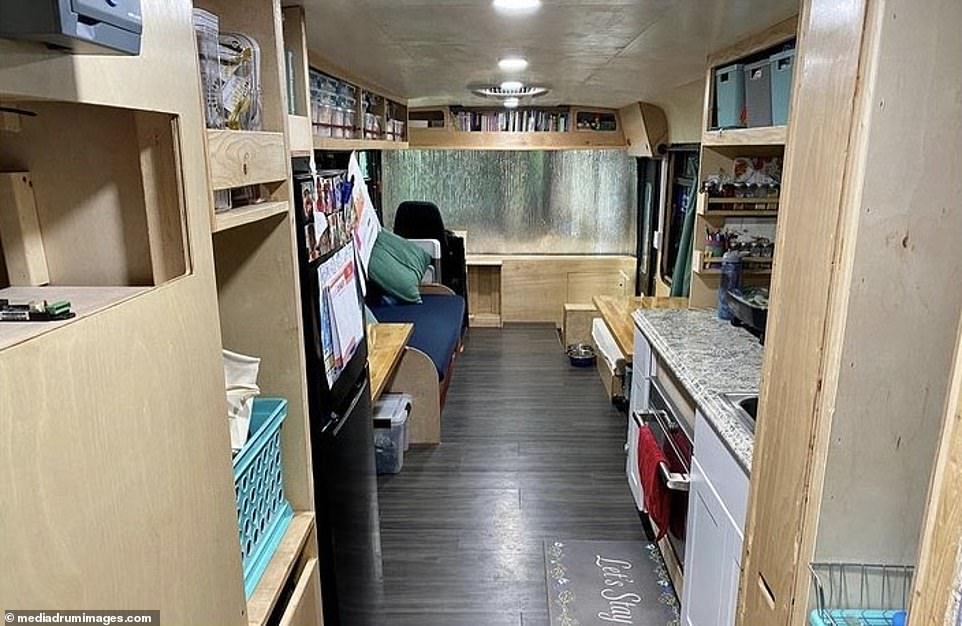 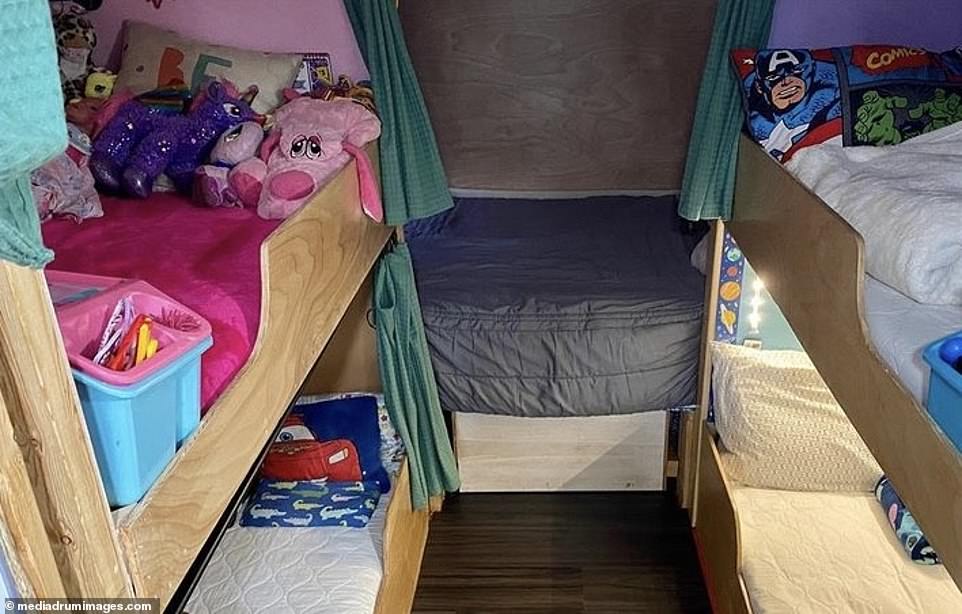 The children slept in bunk beds while the parents slept in the back. Whitney said the children stood frozen in fear in between the beds when Kyle ran in to get them out of the blazing inferno 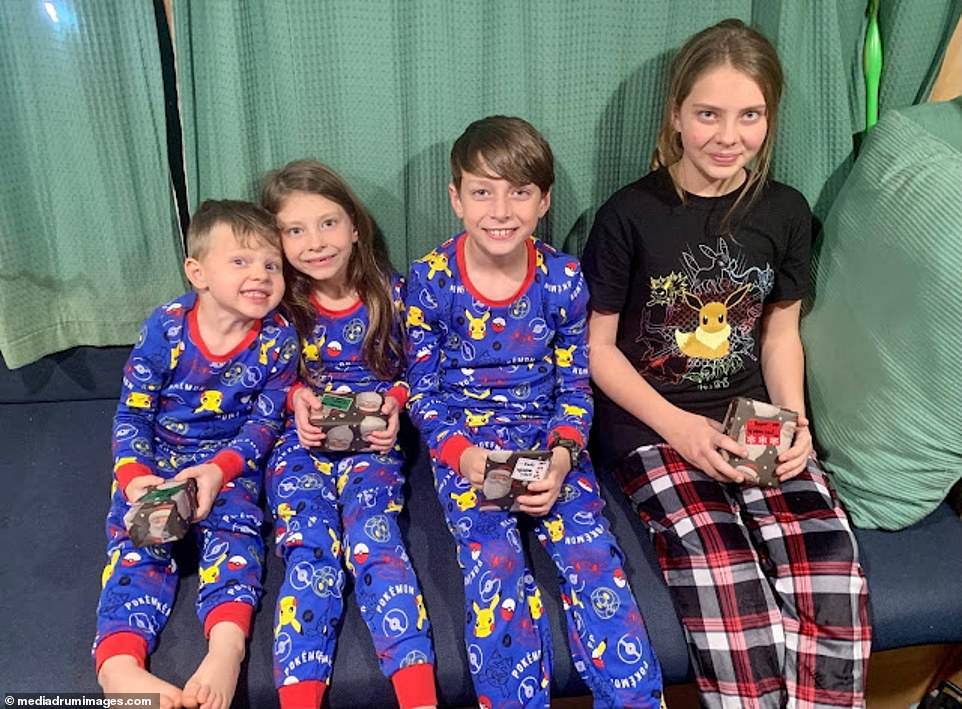 Kyle said Pepper, the oldest of the four children, fought back when he was trying to rescue her because she believed Kade was still in the bus. The younger brother was able to jump out of the vehicle shortly after the explosion 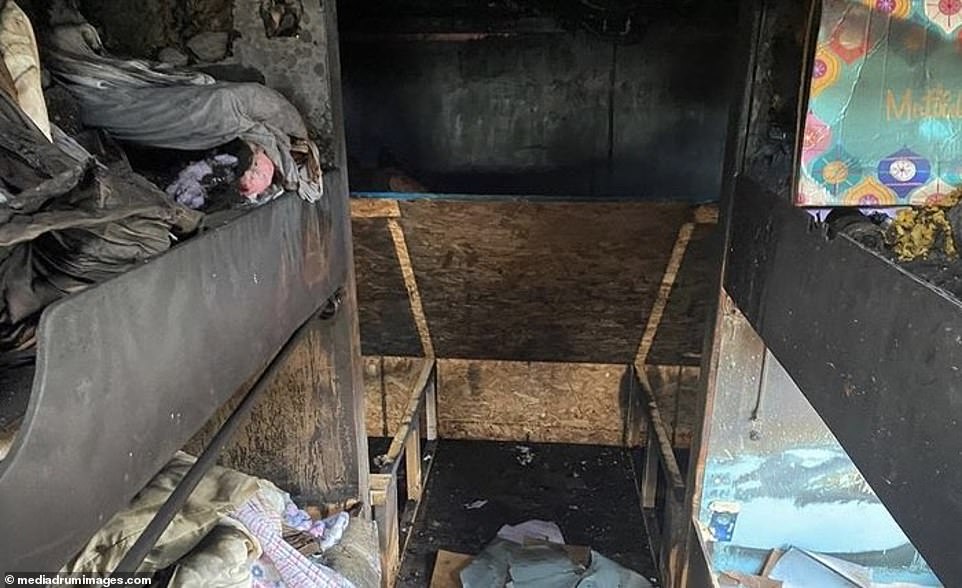 ‘I grabbed her arm and pulled her out of the bus and threw my body onto her, patting her down and extinguishing the flames all over her body and hair,’ Whitney said.

‘Within 1 minute of Kyle exiting the bus the first explosion happened. If Kyle would have hesitated it wouldn’t have worked. I just know the outcome would have been far worse.

‘Me and Kyle have talked about how we believe that these bodies are temporary and any lasting scars, deformities or ailments will be part of the experience. We thank God we are alive.

‘I told Kyle I was particularly grateful that he will have sustained some of the same injuries as the kids. They will have a parent that can relate and empathize with them.

‘I’m grateful again that our kids don’t have to walk the path of recovery alone. He is the dad that got them out and the dad that will get them through this tragedy, alongside them. I have full confidence in his role to protect and lead.’ 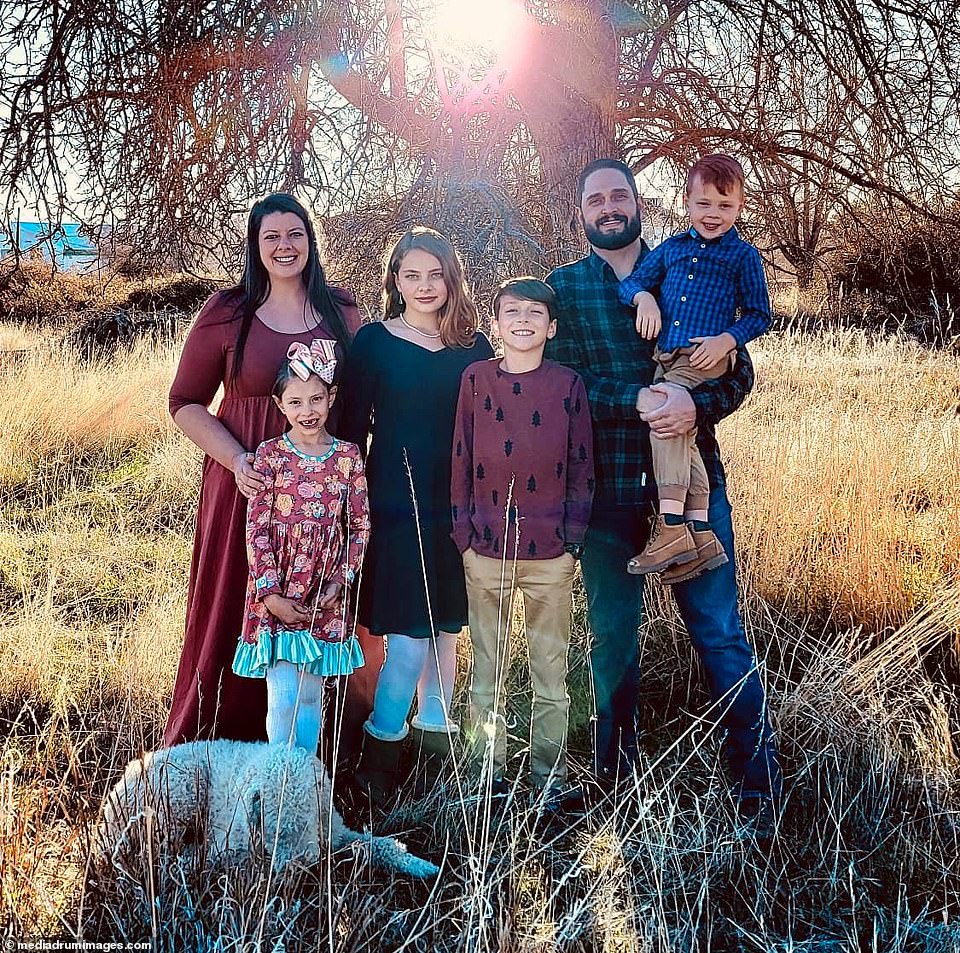 The Copeland family sold their home in May 2021 to embark on full-time travel that summer to make-up for ‘years filled with military separations, addiction recovery and medical trauma,’ according to their Instagram page, @copelandbuslife where 26,000 fans follow their family’s journey.

Since the accident friends and family have rallied around to support the Copeland family with fundraising efforts and salvaging any undamaged belongings from their bus.

‘We are becoming so much stronger as a family and feel deeper degrees of compassion and love,’ Copeland said. ‘Life is good and we choose to see life as a beautiful experience. We are survivors, not victims.

‘I am grateful for my wife who is willing and able to take on enormous stress and responsibility while also being able to nurture and love her family with grace.

‘It’s true, moms just make everything feel better and we all know it,’ he added.

‘I can run through flames, but don’t ask me to do what she is doing it’s incredible and divine.’

A GoFundMe for the family has raised more than $240,000 to help the family.