Israel accused of placing itself in ‘direct’ confrontation with Iran with suspected attack on military airbase in Homs. 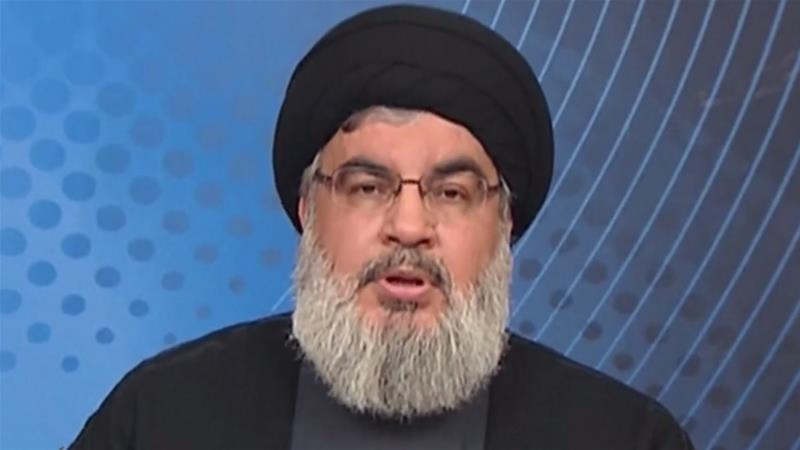 A suspected Israeli missile assault on a Syrian airbase in Homs province was a “historic mistake”, the leader of Lebanon’s Iranian-backed Hezbollah has said in a televised speech.

Hassan Nasrallah said on Friday from the Lebanese capital, Beirut, that Israel had placed itself in direct confrontation with Iran, referring to the missile attacks that targeted military sites in Syria on April 9.

The attack on the airbase, located 40km west of Palmyra, killed about 14 people, at least four of whom were Iranians from Iran’s Islamic Revolutionary Guard Corps – an independent force that answers only to the country’s supreme leader.

Nasrallah described the attack as unprecedented in the region – something that could not be overlooked.

The missile attack followed a suspected chemical attack targeting Douma, a former rebel-held town in the Damascus suburb of Eastern Ghouta, which has been the target of a two-month offensive by Syrian President Bashar al-Assad’s forces.

There has been no comment by Israeli officials on the issue.

In his speech, Nasrallah described the suspected chemical attack, which killed at least 85 civilians, including women and children, as a “theatrical play”, and appeared to clear the Syrian government of responsibility amid a chorus of Western accusations against it.

He cautioned the United States against military intervention in Syria, saying it would pit the country in a battle with “the people of the region” rather than “armies or organisations”.

He dismissed President Donald Trump’s Twitter posts as posing no threat to Russia, Iran or Syria.

Nasrallah’s remarks came shortly before the Israel military announced on Friday that an Iranian drone it shot down in February was armed with explosives.

The drone, which had entered Israeli airspace, was “tasked to attack Israel”, an investigation by the Israeli military concluded.

After flight path analysis & an operational & intelligence-based investigation of the Iranian UAV that infiltrated Israeli airspace on 2.10.2018, the IDF concluded that the Iranian UAV was armed with explosives & was tasked to attack Israel

By intercepting the Iranian UAV, IAF combat helicopters prevented the attack Iran had hoped to carry out in Israel. The UAV was identified & tracked by Israeli defense systems until its destruction, effectively eliminating any threat the Iranian UAV posed

The Israeli army launched “large-scale” attacks inside Syria in what it claimed was its response to the Iranian drone’s presence in the occupied Golan Heights and the subsequent downing of an Israeli fighter jet by Syrian air defence forces.

Israel is technically at war with Syria and occupies a chunk of the strategic Golan Heights, which it seized in the Six Day War of 1967 and later annexed in a move never recognised by the international community.

Israel has sought to avoid direct involvement in the  Syria conflict but acknowledges carrying out dozens of air raids there to stop what it calls deliveries of advanced weaponry to Hezbollah.