Paris: Wearing hard hats and protective suits, the choir of Notre-Dame Cathedral sang inside the medieval Paris landmark for the first time since last year’s devastating fire for a special Christmas Eve concert.

Accompanied by an acclaimed violinist, a rented organ and a soprano soloist, 20 singers performed beneath the cathedral’s stained-glass windows amid the darkened church, which is transitioning from being a precarious hazardous clean-up operation to becoming a massive reconstruction site.

The singers stood socially distanced to be able to take off their masks — which is required indoors in France to stem the spread of the virus — and sing. 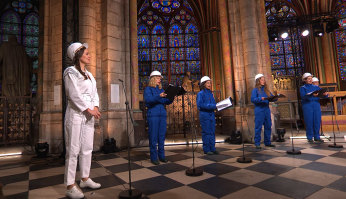 The concert was recorded Saturday and will be broadcast Thursday night. The public was not allowed and isn’t expected to see the insides of Notre-Dame until at least 2024.

The diocese called it a “highly symbolic concert … marked with emotion and hope,” and a celebration of a “musical heritage that dates to the Middle Ages.”

The archbishop of Paris, Monsignor Michel Aupetit, will hold Thursday’s Christmas Eve services in Saint-Germain-l’Auxerrois Church across from the Louvre Museum instead of Notre-Dame. 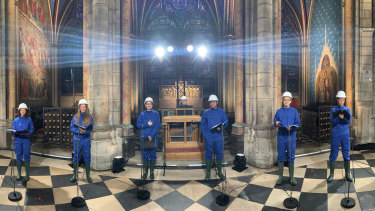 The concert from Notre-Dame Cathedral will be broadcasted on French television on Christmas. Credit:AP

The Notre-Dame choir used to give 60 concerts a year inside the cathedral but has been itinerant ever since, moving among other Paris churches.

The April 2019 fire consumed the cathedral's lead roof and destroyed its spire, and only earlier this month did workers finally stabilise the site enough to begin rebuilding.

French President Emmanuel Macron urged the French public to limit their contacts and remain vigilant to keep infections under control during the Christmas holidays.

He made the statement as he left isolation in a Paris hospital after a week with COVID-19 on Thursday.

Macron’s office said that he is finishing a week of isolation at a presidential retreat in Versailles based on French health protocols, which recommend seven days of confinement following the appearance of symptoms or a positive virus test. 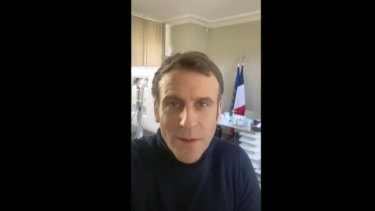 French President Emmanuel Macron released a video while he was isolating in Versailles.Credit:@EmmanuelMacron via AP

In an apparently self-shot video from the presidential retreat last week, a tired-looking Macron said he was suffering from a dry cough, headaches and fatigue, and said negligence and bad luck led to him getting infected.

French authorities lifted virus restrictions for the holidays but infections remain high, and some doctors are urging new lockdown measures.

As families prepare to gather for traditional Christmas Eve dinners on Thursday, Karine Lacombe, head of the infectious disease department at Paris’ Saint-Antoine Hospital, warned: “It’s a risky evening, the meal is one of the most risky situations for transmitting the virus.”

But after an emotionally trying year, “it’s important to take into account the need to have some conviviality, it’s a balance between the benefit and the risk,” she said on France-Info radio.

With more than 60,000 deaths caused by the coronavirus and about 2.5 million COVID-19 infections reported, France has paid a heavy toll in the pandemic.

While new infections had dropped below 10,000 per day by the end of November, they have recently rebounded to an average of 14,000 daily new cases over the past seven days, dashing hopes that the second wave was over.