Hilarious moment Bammie the sheep bounces around on garden trampoline

This is the hilarious moment a sheep bounces on a trampoline in someone’s back garden.

The sheep, called Bammie, lives in the garden of this home in Vlagtwedde, in the province of Groningen in the Netherlands.

Footage shows the animal having some fun on the family’s garden trampoline as it leaps through the air. 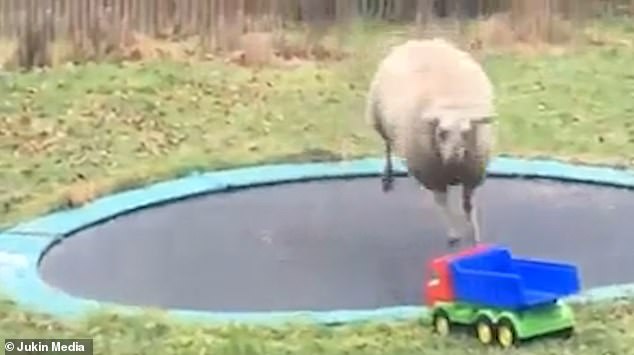 The sheep, called Bammie (pictured), lives in the garden of this home in Vlagtwedde in the Netherlands and decided to go for a bounce on the trampoline

The curious sheep looks like it’s enjoying itself as it bounces on the children’s toy and kicks its front legs up first to get some height.

It leaps with delight on the trampoline outside the family home where the owners watch in amusement.

A small girl watches the animal from the window, and jumps up and down with excitement at the hilarious event.

Bammie stops for a brief moment and appears to spot the child jumping indoors, then imitates her by leaping just as high.

The animal discovered the joys of bouncing on the toy and jumps high in the air, kicking its back legs out as it frolics.

The video was taken on April 18. 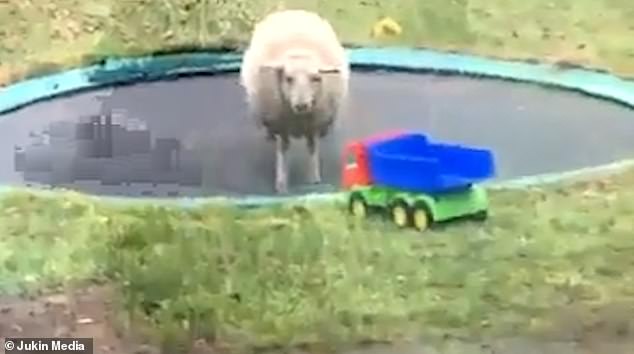 Bammie stops for a brief moment and appears to spot the child jumping indoors, then continues to leap about