Just call me Gnasher! Hilarious moment dog shows off his toothy grin after stealing dentures from a drawer

A dog owner was left in stitches when she discovered her mischievous puppy wearing false teeth.

Milo the Jackapoo was caught on camera with a goofy grin, courtesy of his owner’s mother’s dentures after breaking into a bedroom drawer.

The eight-month-old looks pleased with himself, while his owner, Stacie Owen, from Llandudno, Wales, cries with laughter at the sight of the scruffy mutt. 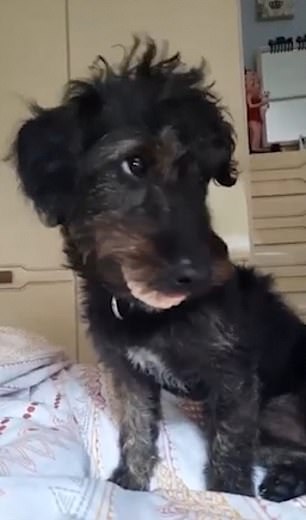 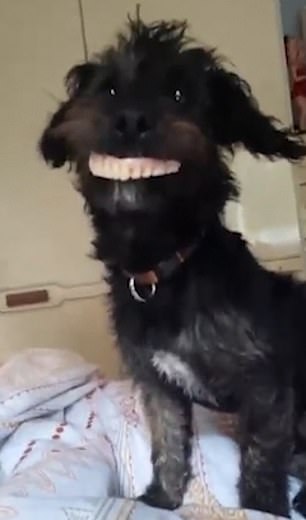 A mischievous Jackapoo from Llandudno, North Wales, has been caught wearing a pair of dentures in hilarious footage

It looks as though Milo has taken a liking to his new teeth, as he turns away when Stacie, who runs a pet service nearby, tries to take the dentures off him.

Stacie said that Milo has recently learned how to open drawers, and is causing mayhem now he is using his newfound talent for bad.

‘I wondered why he went quiet and found him in the bedroom with my mum’s old dentures,’ she said.

‘He likes to hold things in his mouth, he feels very proud when he has something. Whenever we go on a walk he will always bring something home.’

She filmed the hilarious incident on June 11.

Milo, an eight-month-old puppy, has recently learnt how to open drawers and pinched the false teeth from a bedroom drawer, leaving her owner, Stacie Owen, in stitches