Hilarious moment little girl, four, gets toilet seat stuck around her head while playing with it as firefighters need 45 minutes to free her

This is the hilarious moment a four-year-old managed to get her head stuck in a toilet seat – taking firefighters 45 minutes to remove.

Mischievous Darcy-lillian Hillberg had found the removable toilet seat in a cardboard box as the family were moving house.

Mum, Gemma, 32, used all her strength to try and free her daughters head, as well as handfuls of washing up liquid, Vaseline and body creams.

But nothing worked, so the mum of four was then forced to visit their local fire station to ask for help. 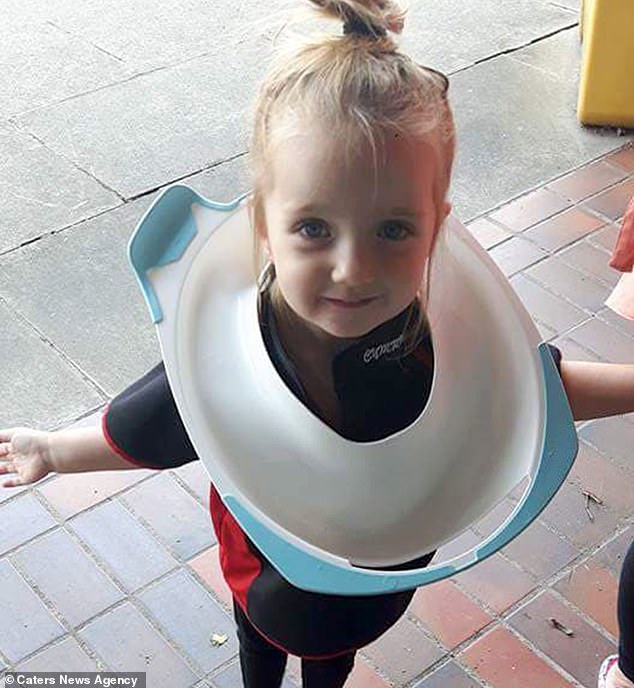 Mischievous Darcy-lillian Hillberg (pictured), four, found the toilet seat in a cardboard box as her mother was packing to move house. It was a removal toilet seat she used so she could sit on the ‘adult loo’ 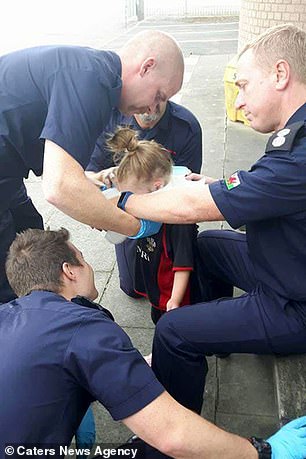 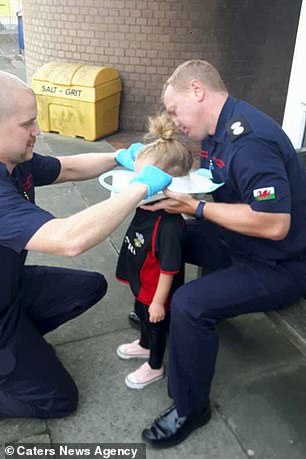 Gemma Hillberg had to take her daughter Darcy-lillian down to the local fire station (pictured with firefighters) to remove the toilet seat. Her previous attempts to remove it using handfuls of washing up liquid, Vaseline and body creams had not worked

Ms Hillberg and her daughter Darcy-lillian were left waiting for 45 minutes before firefighters had the correct equipment to free her.

Thankfully everyone found the entire ordeal hilarious and the four-year-old was safely freed using specialist pliers.

Ms Hillberg, from Penarth, South Wales said: ‘I had been packing to move house and the toilet seat was in a box when she grabbed it. 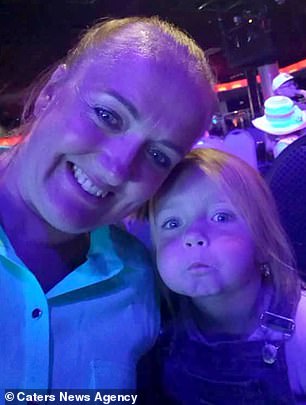 Gemma Hillberg with her mischievous daughter Darcy-lillian. The four-year-old always makes a point of referring the toilet seat incident when passing the local fire station saying: ‘remember when I got the toilet seat stuck.’

‘All of a sudden Darcy-lillian came running over smiling and saying it had popped on her head.

‘It was a removal toilet seat she used so she could sit on the ‘adult loo.’

‘My instant reaction was to laugh but then I thought ‘how will I get this off?’

‘I tried to lift it over her head but it was too tight and I didn’t want to hurt her eyes.

‘Darcy-lillian was laughing and swinging it around her neck at the same time.

‘I didn’t have anything to cut it off with myself so my mum, Mandy Hillberg, 56, suggested I went to the local fire station.

‘When we arrived with Darcy-lillian and the toilet seat over her head they all started laughing at her.

‘It took 45 minutes to get it off her head as the specialist pliers they needed were on the fire engines that were out on jobs.

‘Everyone kept trying to ensure she wasn’t frightened but she didn’t care at all, she was proud of what she’d done.’ 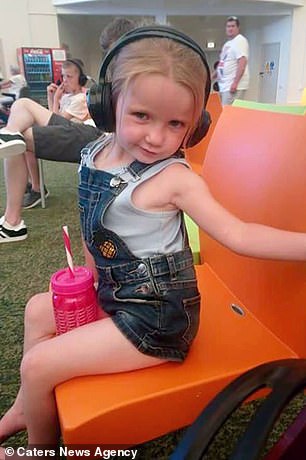 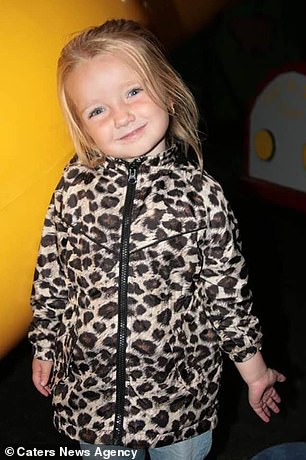 Darcy-lillian (left and right) was eventually freed from the toilet seat using specialist pliers. She and her mother look back on the whole fiasco with fondness

Ms Hillberg, who is also mum to Cody, 11, Sienna, nine and Kendall, one, remembers the ordeal which happened on August 24 last year, like it was yesterday.

She added: ‘Darcy-lillian even says now when we pass the fire station, ‘remember when I got the toilet seat stuck,’ and then she laughs.

‘We all found it so funny and if it wasn’t for the pictures we took throughout, no one would believe it even happened.

‘It’s one of those things we will never forget as it was so funny, I still laugh about it now.’