Hammy hamster! Hilarious rodent falls over and plays dead when a tourist ‘shoots’ it with a finger gun

This talented little hamster entertained an entire crowd of tourists as he perfectly timed his playing dead when a boy pretended to shoot him with a finger gun.

Hafizi Zulazfar filmed his cousin as he attempted to perform the trick shot in Badung, Indonesia.

Mr Zulazfar said: ‘My cousin and I thought it would be great if we could try to imitate a trick shot with that hamster since it seemed really hyper inside its cage, maybe excited with the crowd.’

His cousin points his index finger and thumb to make a pretend gun and slowly swings round to face the furry creature.

Then he cocks his hand and says: ‘Bang’.

The hamster picks up his cue perfectly and raises his claws in the air before falling backwards on to the bottom of his sawdust-filled cage.

Peals of laughter erupt from the crowd and Mr Zulazfar can be heard giggling too.

He said: ‘Many of the tourists around us were also quite surprised by the spontaneous action of the hamster since it just jumped and ran randomly inside its cage before’.

The funny scene was captured in November last year. 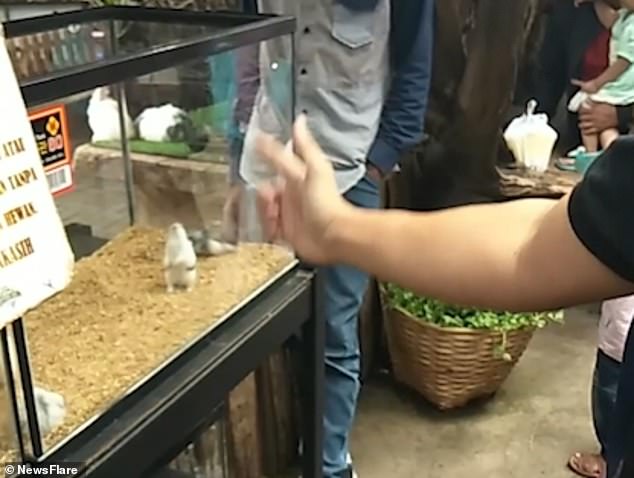 Hamsters can be taught simple tricks like standing on their hind legs or slightly jumping in the air.

Their favourite treats are sunflower seeds and strawberries so these are most commonly used as incentives to encourage hamsters to complete the trick they are being taught.

To teach a hamster to stand you simply hold a sunflower seed slightly above the hamster’s head while saying ‘stand’ so it has to stand on its hind legs to reach it.

To teach a hamster to jump you do the same thing but hold the seed a little higher so it has to jump to reach it.

If this is repeated enough the hamster will eventually do the tricks on command because they expect a treat at the end.