Homeless people are stuck indefinitely in sometimes dangerous motels, rooming houses and caravan parks in Victoria due to a lack of long-term housing, with organisations overwhelmed by the number of people in crisis.

A Parliamentary inquiry into homelessness found one in 57 Victorians had sought help from homelessness services in 2018-19, the financial year before the bushfires and COVID-19 pandemic. 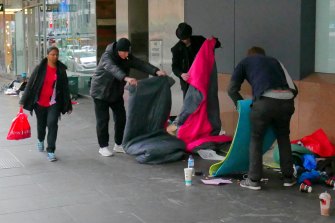 “This has led to a reliance on unsustainable, unsuitable and, in some cases, dangerous motels and rooming houses,” said the report, which was tabled in Parliament on Thursday.

In November last year the Victorian government announced it would build more than 12,000 homes – 9300 of which would be social housing – as part of a $5.3 billion spending blitz to tackle homelessness and create construction jobs.

But the inquiry’s report said despite the unprecedented size of the program, this would still not ensure Victoria would meet the national average of 4.5 per cent social housing as a percentage of total dwellings.

“In addition, it remains to be seen what proportion of the over 80,000 individuals on the Victorian Housing Register will be housed in the new dwellings,” the report said.

In 2019-2020, Victoria’s social housing stock accounted for 3.4 per cent of all housing – the lowest in Australia.

“For Victoria to reach the national social housing average [4.5 per cent of total housing stock], it would need to build up to 3400 new social housing dwellings per year until 2036,” the report said.

According to the report, the median period someone remains homeless in Australia is 4½ months, but it lasts more than a year in about 20 per cent of cases.

People under 35 are the largest age group of people experiencing homelessness in Victoria, although older women were a fast-growing cohort, the report noted.

“Because the homelessness system is so overwhelmed, it only has the resources to provide short-term accommodation for the very needy,” said inquiry chair Fiona Patten.

The inquiry made 51 recommendations, including increasing the provision of affordable, stable long-term housing and prioritising early intervention measures, such as assistance for those fleeing violence.

It recommended the government set up innovative housing models, such as pop-up housing in underutilised buildings, transportable housing and the use of surplus government land (through leases or sale), to create social housing.

It also suggested the government look at implementing mandatory inclusionary zoning, which would compel developers to include social or affordable housing in all new major developments across the state.

“A mandatory model of inclusionary zoning would ensure that the private market takes partial responsibility, alongside government, for the provision of housing that meets the needs of all Victorians,” the report said.

It says there are concerns this could constrain the financial returns of property developers, but incentives could be provided to guarantee the cost of other dwellings in a development would not be driven up because of the inclusion of affordable housing.

The inquiry said measures put in place during the COVID-19 pandemic saw many people previously sleeping rough placed in emergency accommodation, such as hotels, with plans for this to transition into long-term housing.

“This event showed that with sufficient will on the part of the Victorian government, it is possible to end homelessness for many people experiencing it. Whether that will remain the case is yet to be seen.”