Homeowner, 65, made neighbours' lives hell by spying on them with CCTV

The ‘War of Thornton Drive’: Homeowner, 65, made his neighbours’ lives hell by spying on them with CCTV and firing up his CHAINSAW or noisy campervan at 4AM in long-running feud over adjoining wall 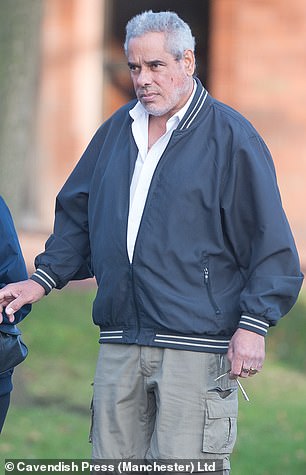 A homeowner used CCTV cameras to spy on his neighbours and kept them awake with his noisy power tools during a bizarre war against families living in his suburban cul-de-sac.

Michael Hall, 65, enraged residents by routinely rousing them as early as 4am either by starting his noisy camper van or by switching on his chainsaw, leaf blower and angle grinder to do some early morning gardening or DIY.

The ‘early bird’ also erected a battery of CCTV surveillance cameras above a wrought iron gate at his £250,000 property in Handforth, Cheshire, so he could illicitly film neighbours coming and going in the street outside.

Police were called in after company managing director Timothy Royle, 53, who lives next door to Hall, kept a video diary detailing months of misery at the hands of his nightmare neighbour during the so-called ‘War of Thornton Drive’.

Father-of-two Mr Royle said Hall’s cameras were deliberately trained on his home to film him and his family outside – making his children too scared to play in the garden. 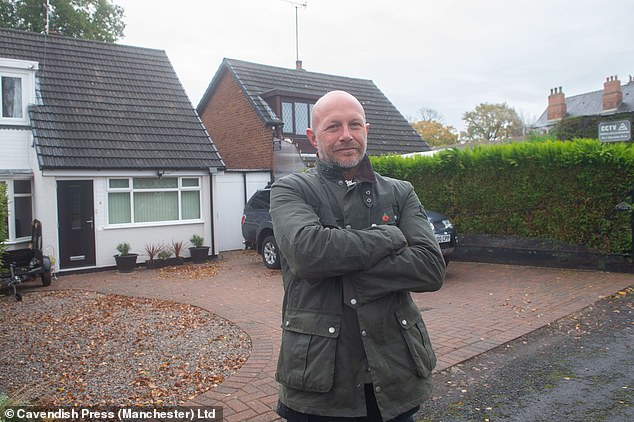 Timothy Royle (pictured), who lives next door to Hall, kept a video diary detailing months of misery at the hands of his nightmare neighbour during the so-called ‘War of Thornton Drive’

Mr Royle, a former paratrooper who runs a kitchen supply company, also said Hall would use a chainsaw to cut his hedges during unsocial hours and use a lawnmower and leaf blower at 6.30am – sometimes cutting the grass while listening to the radio.

He used the leaf blower at 8.15am on Boxing Day and 8am on a Bank Holiday Monday and then during the 2018 World Cup Final while wearing a boiler suit and gas mask.

Last April, Hall, a retired panel beater who lives with his 71-year old wife Pamela, was convicted of harassment and issued with a year-long restraining order.

This banned him from pointing CCTV cameras at the Royles’ home and prohibited him from using noisy gardening or electrical equipment between 9pm and 8am.

But he was arrested again after Mr Royle rang police just a week after the order was made, saying the cameras were still operating and filming his comings and goings.

This week, Hall was back in court where he was found guilty of breaching a restraining order following a trial.

He denied wrongdoing claiming he had only installed the cameras for security reasons but has since taken them down.

After the case Mr Royle revealed his partner and three other families living in the cul-de-sac had been forced to quit their homes because of the harassment. 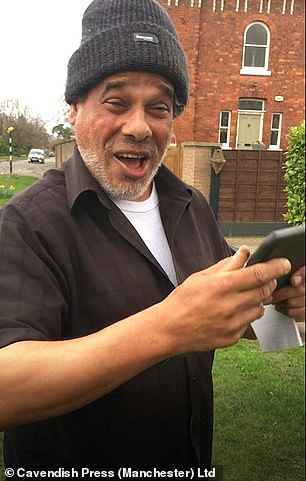 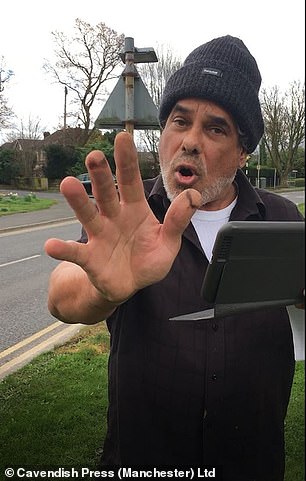 Hall (pictured) is confronted by Mr Royle for encroaching on his land in Handforth, Cheshire

He said: ‘I’m afraid the magistrates should really have just given him a custodial sentence because it seems all he just wants to do is to make our lives difficult.

‘It’s just something that he’s messed up on and what he does is just bizarre. He leaves his camper van running with the exhaust pipe blowing through the hedge and he will do it when I’m doing work on the front of the house.

‘He will also stand in the driveway whistling at me and then film me and the the gardeners. He says: ‘I’m just watching what you are doing and making sure you’re not doing anything to my property.’

‘He’s obsessed that I am trying to claim his party wall and turn it into a gable wall. All I am doing is tidying my garage up because it is linked to his home. 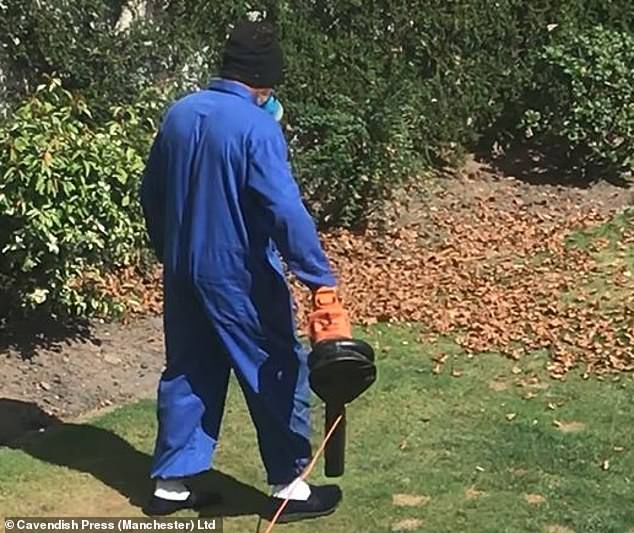 Hall used the leaf blower at 8.15am on Boxing Day and 8am on a Bank Holiday Monday and then during the 2018 World Cup Final while wearing a boiler suit and gas mask

‘He has the cameras on the outside of his property but they are pointing at everybody else’s property – and not his. The road that goes beyond his gate is the private road and he’s just decided 15 years ago to segregate it by putting his own gate across it.

‘He’ll cut all of his hedges with a chainsaw and throw all the bits into his neighbours’ garden. He has cordless leaf blowers that are battery operated and they’re big powerful ones too.

‘He would walk down the cul-de-sac and blow gravel around. People would cut the grass on the weekend and then he would walk down and blow grit all over the lawns. Because I’m an ex-para trooper I can deal with it but I have heard from people who have gasped and said to me: ‘You’ve brought this place?’

‘He used to go out in his vehicles at 4am and it was a big camper van and a 1960s Ford with thunderous exhausts. He just says he’s going to the shop but we all get woken up and we all have to sleep with ear defenders in. 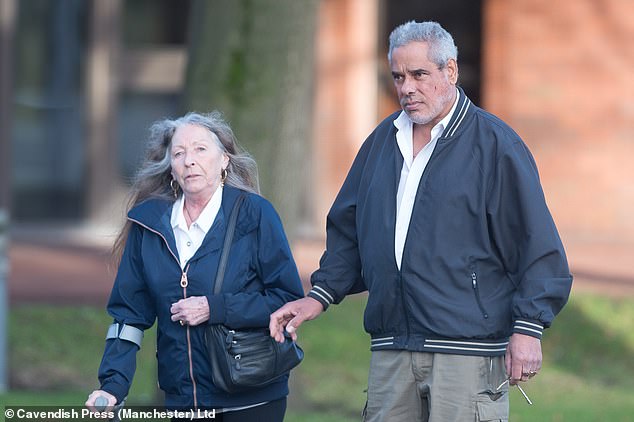 Hall, a retired panel beater who lives with his wife Pamela, 71, is pictured last December

‘The restraining order moved it to 8am but bang on 8am it starts again. Every weekend it’s leaf blowers, chainsaws – you name it.

‘My partner has gone as she can’t cope with it anymore and three families have gone too. The problem I have with it now is that I won’t be able to sell the place, because I become yet another victim that’s is looking to run away.

‘I’ve done two combat tours of Northern Ireland dealt with the IRA, dealt with bombs, explosives, gunshots, you name it, but nothing has annoyed me more than this idiot.’

Stockport magistrates heard the latest round of hostilities began following a party wall dispute between the two men over Mr Royle’s garage at Number 4 which adjoined a gable wall of Hall’s property at Number 2. 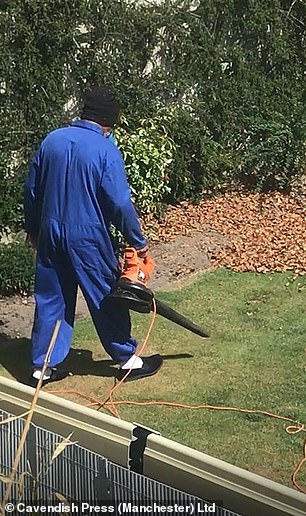 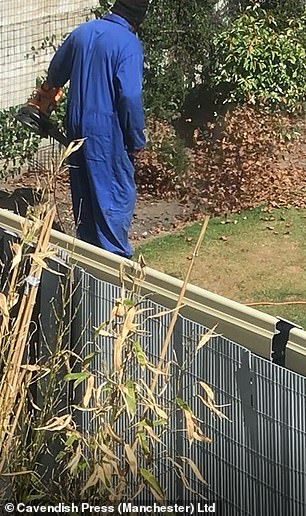 Hall enraged residents by routinely rousing them as early as 4am either by starting his noisy camper van or by switching on his chainsaw, leaf blower and angle grinder

Mr Royle told the hearing: ‘There’s a rack erected at the side of the house next to me with cameras mounted on it.

‘Every time I come out the front door I’m filmed by at least two or three cameras. My children won’t play out the front they don’t want to be filmed and there’s a big sign about CCTV camera which is about seven feet high.

‘Whenever I get in my vehicle I am being filmed and whenever my kids go out they are being filmed. These cameras covers everybody else’s property but are not filming any of his property at all. 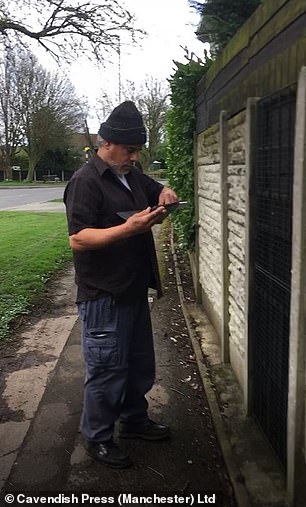 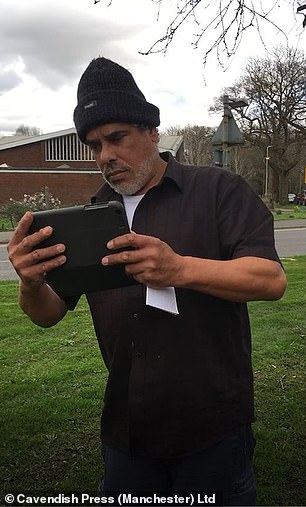 Hall, 65, was this week found guilty of breaching a restraining order following a trial

‘The minute I come out of my front door I am being filmed and the camera’s always been on my property. There was also a sound detector that picks up vocals so that I can be listened to when I have conversations.

‘I have been told by Mr Hall in the past that I am being audio recorded and he would say: ‘Got you on it because I film you and record you. The cameras were designed to film everything that goes on in the close, not his own property.’

Hall, who had a previous conviction from 2014 over another similar dispute with neighbours, denied pointing his cameras at his neighbours and said one of the devices was a ‘dummy’ which didn’t work.

He said: ‘We have equal maintenance rights on that driveway which is private. Both my cameras were pointing downwards but only one er worked. 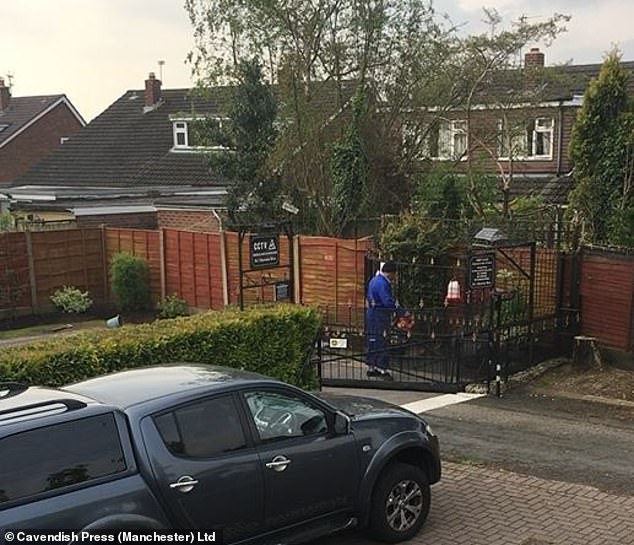 Hall is filmed using his leaf blower at 8.15am on a Bank Holiday morning in the Cheshire town

‘The other camera was pointing to the top of my conifers. The rack and gate was constructed 22 years ago and I’ve had the CCTV for 20 years and up until eight years ago we had dummy cameras.

His wife Pamela said: ‘The purpose for the cameras has been for security – that’s all they’re for. We lock the gate because Mr Royle kept coming onto our drive taking pictures of me through my windows.’

In mitigation, defence lawyer David Thompson said: ‘This is the result of a long standing disagreement between the defendant and Mr Royle – the basis of which is a party wall. 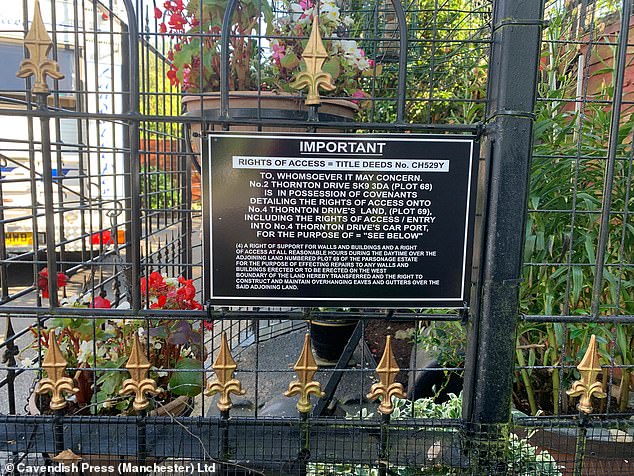 A sign on Hall’s house in Handforth, which gives details of the ‘rights of access’ and title deeds

‘Mr Royle wanted to do some work on that wall and led to a civil dispute. This defendant has lived at his address for over 20 years and the complainant has been at the address for two to three years when the incident began.

‘The defendant felt genuinely he was being trespassed upon – not in the legal sense but he didn’t feel he was getting the right sort of communication with the complainant in relation to this party wall.

‘It is apparent throughout the trial the defendant was ordered not to put cameras in his garden facing anywhere other than his own property.

‘(It) wouldn’t necessarily be a criminal offence to point a camera at a property other than their own but the mischief was to point two cameras on his house facing one way. 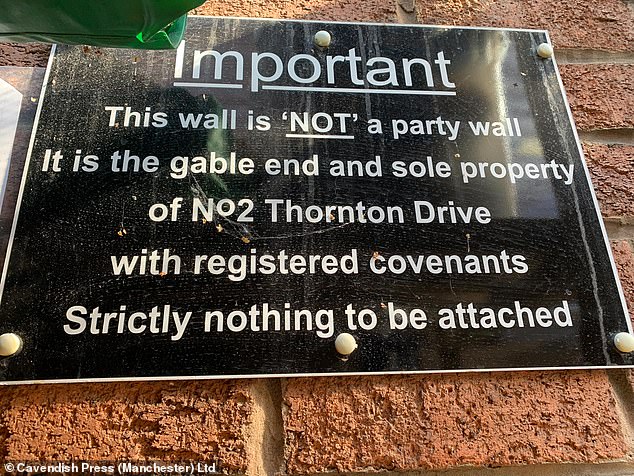 A sign on Hall’s house, which warns the wall is the ‘gable end and sole property of No 2’

‘Complainant says he is acting on behalf of other neighbours but that doesn’t appear to be correct they aren’t here at court. This is an issue that has got out of hand between the defendant and complainant.’

Hall was also ordered to complete a 12 month community order, 150 hours unpaid work and pay £1,050 in costs and surcharges. The restraining order was extended to two years.

JP Andrew Sokill told him: ‘you should have taken the cameras down or made sure they were not pointing the way they were. It was deliberate act and it would have been in our rights to send you to prison today – it is that serious.

‘Any court order breached is seen as being very serious and if you where to breach this order you would be looking at a custodial sentence.

‘If you come to court under the same circumstances another bench won’t be as lenient. These cameras must not point at your neighbours.’