Standoff in a working-class neighbourhood descends into violence, breaking an uneasy peace that had lasted several days. 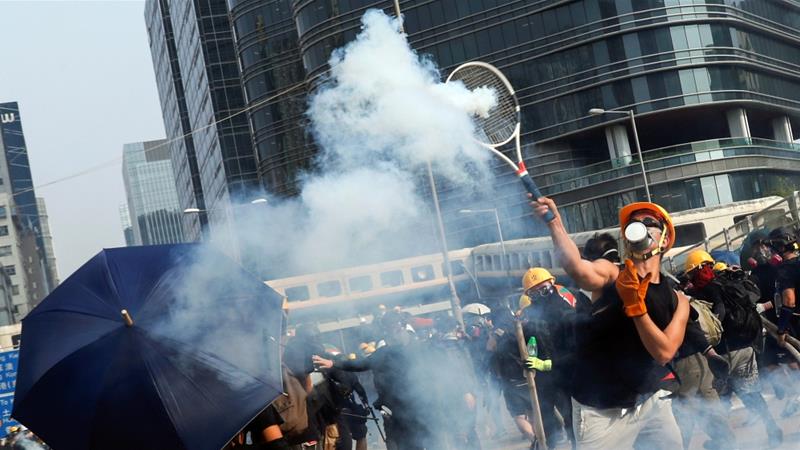 Hong Kong police have fired tear gas and baton-charged protesters who retaliated with a barrage of stones, bottles and bamboo poles as a standoff in a working-class neighbourhood descended into violence, breaking an uneasy peace that had lasted several days.

Thousands of demonstrators, many wearing hard hats and gas masks, on Saturday marched through the industrial Kwun Tong area, where they were blocked by dozens of riot police with shields and batons outside a police station.

Frontline protesters – known as the “Braves” – pulled together a barricade of traffic barriers and bamboo construction poles. As the afternoon wore on, some fired stones from slingshots, prompting a charge from police, wielding batons and pepper spray.

Tears gas swept across the road as protesters retreated, leaving a trail of broken bottles and at least one small fire in their wake as pro-democracy protests entered their 12th week on Saturday.

Several of the black-clad protesters were detained as officers swept through.

Four metro stations were shut down around Kwun Tong, a densely populated area on the east of the Kowloon peninsula, but thousands packed the streets anyway, most carrying umbrellas against the sun despite hazy skies in the former British colony

Hong Kong’s police force has become the target of the protesters’ ire for its perceived heavy-handed response to the months of demonstrations.

Antipathy has soared towards the police, who have used baton charges, rubber bullets and tear gas against hardcore protesters, but are also accused of beating peaceful demonstrators.

“What’s been happening is that police have slowly been clearing the streets following a large peaceful protest,” Al Jazeera correspondent Adrian Brown said from the streets of Hong Kong.

Protesters were allowed on the streets between 1pm and 4pm, but when they did not leave after 4pm, the police moved in.

“It’s a reminder that after 12 consecutive weeks of protests that the streets of Hong Kong in some places still resemble a bit of a battleground,” said Brown.

Saturday’s protest focused mainly on the installation of a large number of CCTV cameras in the city, with residents fearing their privacy might be at risk.

In mainland China, facial recognition technology has allowed the government to follow the whereabouts of citizens.

Although Saturday’s protest was not as large as last week’s, when 1.7 million people took part, Brown said it was a solid reminder that the movement had not run out of steam.

Earlier during the day, protesters once again tried to interfere with the operations at the Hong Kong airport, but their attempts to disrupt the passengers’ commute to the airport failed.

The demonstrations, which have occasionally shut the airport and businesses, still have broad support, despite some violent clashes between police and protesters, said Brown.

On Friday night, thousands of protesters chanted slogans and formed human chains around the city in a peaceful protest dubbed the “Hong Kong Way”.

Organisers said 135,000 people took part in the demonstration, inspired by the one in 1989 when an estimated two million people joined arms across three Baltic states in a protest against the then-Soviet rule that became known as the “Baltic Way” or “Baltic Chain”.

Earlier this week, Lam announced that her office would “start immediately a platform for dialogue with people from all walks of life”, while promising to conduct an investigation into alleged police abuse.

According to Brown, those conversations have started, but it is doubtful that they will lead to concrete results.

“On the other side of Hong Kong, Carrie Lam has been meeting with 20 people she selected to start what she called a platform of dialogue, a way for her to build reconciliation,” Brown said.

But, Brown added, none of those people were closely linked to the protesters that were on the streets on Saturday.

The Hong Kong protests began in June following the introduction of a controversial extradition bill that would allow for citizens of and visitors to Hong Kong to be extradited to mainland China.

Although the bill has since been shelved, protests against the Hong Kong government and increased Chinese influence have continued for months.

Demonstrators say they are fighting the erosion of the “one country, two systems” arrangement that enshrines a high degree of autonomy for Hong Kong since it was handed back from British to Chinese rule in 1997. 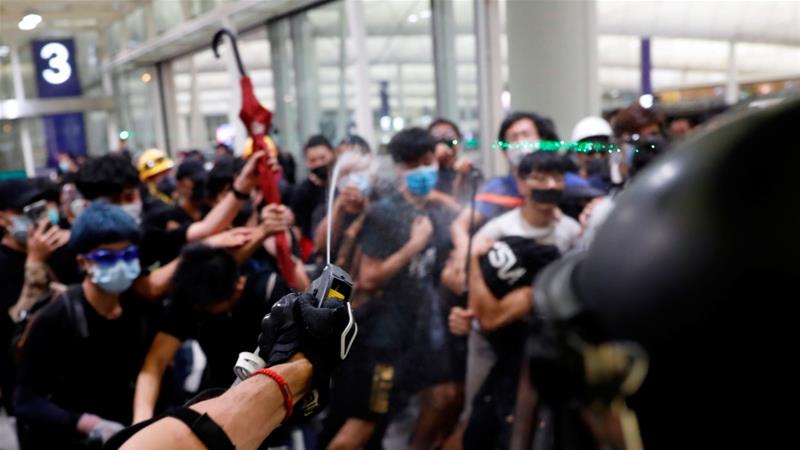 Will China run out of patience with Hong Kong protests?