Hopes of horse racing resuming this week were dashed today after four more cases of equine flu were found in vaccinated thoroughbreds – bringing the total to ten.

The British Horseracing Authority announced the new cases found at the Newmarket yard of trainer Simon Crisford, in a blow to hopes of resuming action on Wednesday.

It follows an enforced six-day shutdown following three cases – which later rose to six – of the highly-infectious disease found at Donald McCain’s stable in Cheshire. 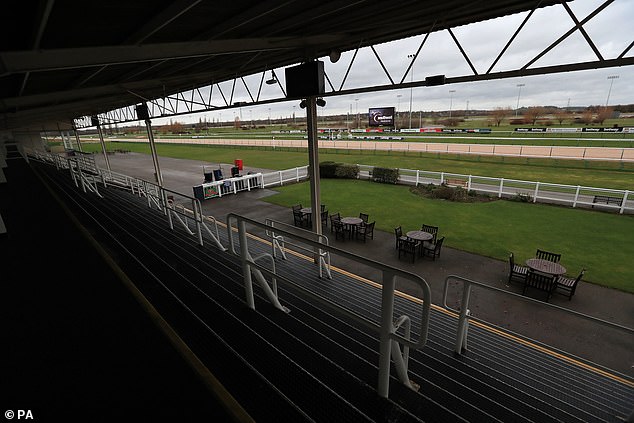 It is the longest enforced stoppage since an outbreak of foot-and-mouth disease in 2011 resulted in a two-month suspension of racing in Britain.

That outbreak led to the cancellation of the Cheltenham Festival in the same year. The 2019 festival, the highlight of the jumps calendar, is due to start on March 12.

The BHA said last night that Crisford – former long-standing racing manager to Godolphin – had been named ‘in order to ensure the Newmarket community is aware of the yard at which an infection has been identified’.

It added: ‘No non-urgent journeys should be made to this yard – including by the media – and anyone who wishes to travel to the yard is advised to first contact the trainer’s office. 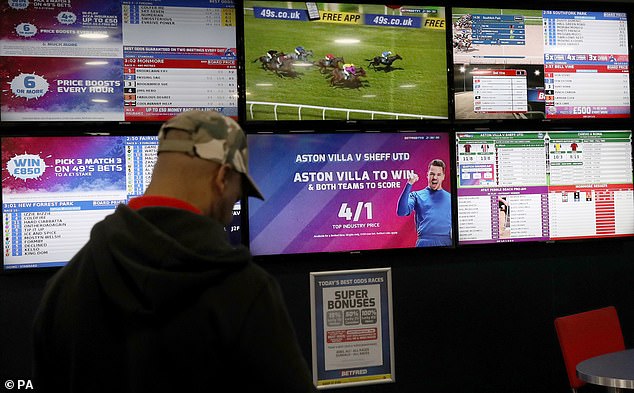 ‘This yard is one of the 174 which has been required to undergo testing due to the fact that runners from the stable competed at the fixture at Newcastle on February 5, which had been identified as a potential risk fixture.

Equine flu: What is it, and are humans at risk?

Could the flu be fatal and what are the symptoms?

The disease may be serious in unvaccinated horses, but symptoms in vaccinated horses are usually mild and transient. Symptoms may include a raised temperature, a cough and nasal discharge. It is highly contagious.

What is the treatment for infected horses and how long does it last?

Much the same as for human flu. Rest, and other medications for symptoms as needed.  In vaccinated horses, typically 24 to 48 hours. If a horse is unvaccinated, two to ten days.

Is there any risk to human health from the equine influenza virus?

There is no known human health risk associated with the virus.

How did the virus arrive in this country and how has it spread?

The British Horseracing Authority (BHA) believes there is a link between this outbreak and other recent outbreaks elsewhere in Europe.

What steps has the BHA taken since being informed of the outbreak?

All races have been called off until at least Wednesday. Restrictions are in place on horses from yards likely to have been in contact with horses from affected yards.

What is the advice to people working with racehorses?

The BHA says those working with racehorses should be vigilant and alert to possible clinical signs. They should put increased biosecurity measures in place – as a minimum, hand washing and change of clothes should be required on arrival at any yard.

When will the ban on racing be lifted?

The BHA will decide tomorrow evening whether it is possible to resume racing on Wednesday.

‘At the moment the affected horses are all contained within this yard.

‘The Newmarket community – including licensed trainers, veterinary surgeries, farriers, racing school and all other relevant bodies – are being advised to continue to show increased vigilance in biosecurity.’

A statement from the BHA added: ‘A further update will be issued as early as possible tomorrow.

‘This will include further details of action that is being taken off the back of this incident, and how the process will operate for the decision which will be made tomorrow evening regarding whether it is possible to resume racing on Wednesday, February 13.’

The news comes after what had appeared to be a positive weekend in the fight against the disease, with no fresh cases being reported either on Saturday or up to a previous BHA statement issued shortly after 4.30pm on Sunday.

Some 720 tests had returned negative on Saturday and around the same total was estimated in addition to that on Sunday, from over 2,000 received by the Animal Health Trust in Newmarket.

Racing in Britain was cancelled on Thursday, following an announcement by the BHA on Wednesday night of the McCain outbreaks, with the yard having had runners earlier in the week.

However, meetings are continuing to take place as scheduled in Ireland, albeit with British runners prevented from travelling.

Speaking in the afternoon update, David Sykes, director of equine health and welfare for the BHA, had said: ‘The data is encouraging and provides a further indication that the precautionary safety measures have helped to contain the spread of disease.

‘However, the picture is still developing and it remains the case that we will make an evidence-based decision about the situation on Monday.

‘It remains paramount that, for the sake of our horse population, we do not take any unnecessary risks. This is not a common cold, it is a highly contagious and potentially serious disease.’ 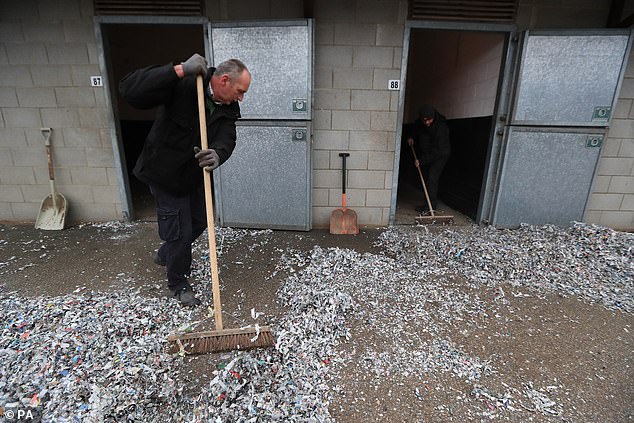 Mr Sykes went on: ‘The prioritisation exercise with regards to testing will help deliver a detailed picture of the spread of infection.

The Professional Jockeys Association fears a racing shutdown of longer than a week may quickly begin to have severe financial consequences for some of its members.

Racing in Britain was put on hold by the British Horseracing Authority after it emerged several vaccinated horses at the yard of trainer Donald McCain had tested positive for equine flu.

PJA chief executive Paul Struthers admitted that, while some riders will take the chance to use the minimum six-day break for an unexpected holiday, for others it will be a worrying time.

He said: ‘Some jockeys will take this opportunity for a bit of a break – it is the time of year anyway some might be able to get away, particularly those on the Flat.

‘As we know, we’re going to be missing six days at least, and we’ll know more on Monday when more results are known, but for some jockeys the inability to earn any money will very quickly start becoming an issue.

‘Some jockeys will be immune to it, but that will be a very small number.’

While some jockeys get financially rewarded for riding work on the gallops, the restriction on movement of horses and enhanced biosecurity measures put in place will even affect their ability to do that.

‘Targeted testing, alongside the wide survey of data we have already gathered, will help provide a clear picture as to the scale of the spread of the disease.

‘Any decision will include guidance and input from veterinary experts, including the industry’s veterinary committee.

‘We are also working through the process that will be followed in order to give specific yards the all clear to resume racing.

‘This will balance the clear need for yards to resume business as soon as possible with ensuring that we do not put horses at the risk of unnecessary harm. We are liaising with the National Trainers Federation and trainers on this process.’

Mr Crisford enjoyed a successful season in 2018, and has high hopes of Classic success in the new campaign with the once-beaten colt Jash, owned by Sheikh Hamdan and prominent in the betting for the Qipco 2000 Guineas.

He also enjoyed victory at Royal Ascot in June, winning the Britannia Handicap with Ostilio.

The BHA had said in the afternoon statement that ‘a pragmatic and evidence-led approach’ was being adopted in order to make a decision if racing can swing back into action as hoped on Wednesday, with a prioritisation plan for testing in place.

It said that plan places emphasis on the ‘the proximity of horses to a positive test, or to a yard returning a positive test’ with swabs continuing to be collected and tested, with some being ‘fast tracked’.

The BHA also said ‘a specific plan is being formed as to what the clearance process will be for individual yards to return to racing’. 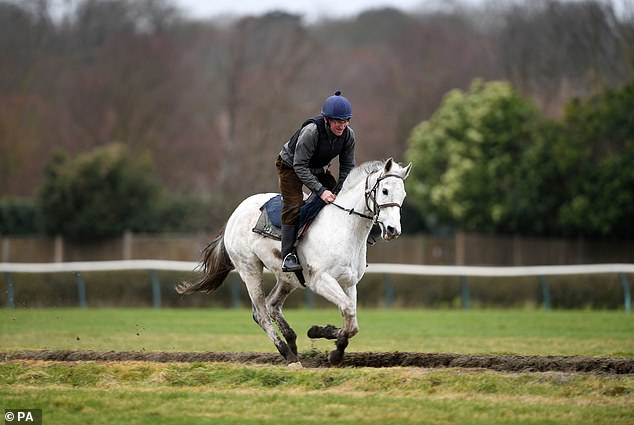 The BHA also confirmed all horses from the stable of Rebecca Menzies have now tested negative, although the yard remains under under close surveillance. 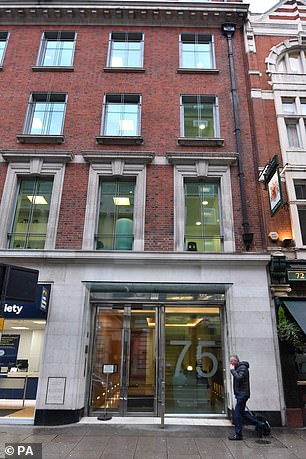 A general view of the London headquarters of the British Horseracing Authority, last Friday

He told BBC Radio 5 Live’s Sportsweek: ‘I think it might be difficult for Wednesday, it might be doubtful, it depends how they progress on the tests.

‘I’m hopeful it might be on by the end of the week, but that’s hope more than anything. Of course, Cheltenham is coming up, a very important meeting.

‘We all hope it will be contained by then of course, but there’s lots of racing and planning to be done before Cheltenham.

‘The welfare of the horses is most important, that’s certainly got to come first. You can see what a big industry it is now.

‘Of course we’re worried about everything, all the punters, everyone concerned. We’re certainly missing the racing. It’s a good job we’ve got the rugby to follow.’ Scott Disick & Sofia Richie Celebrate Valentine’s Day 1 Week After He Finally Follows Her On Instagram
We and our partners use cookies on this site to improve our service, perform analytics, personalize advertising, measure advertising performance, and remember website preferences.Ok