Hopes of another successful coronavirus vaccine are soaring after scientists today began a trial to test it on 6,000 people in the UK.

Under an early-access deal, Britain is promised 30million doses of the vaccine from pharmaceutical firm Janssen by the middle of next year.

The large trial to determine if the vaccine works aims to recruit around 6,000 people in the UK, from a total of 30,000 worldwide. 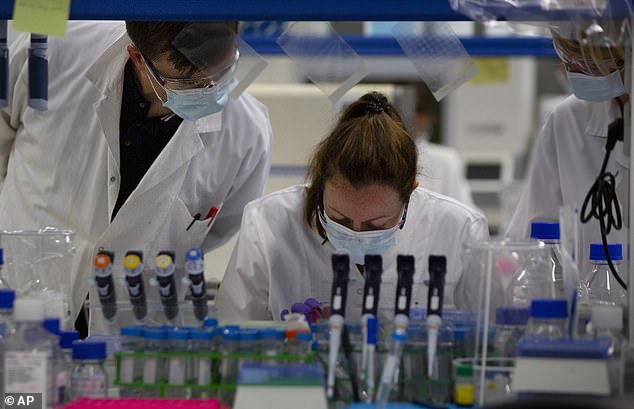 Under an early-access deal, Britain is promised 30million doses of the vaccine from pharmaceutical firm Janssen by the middle of next year. Pictured: Scientists work on the Janssen jab in Belgium

The vaccine from Janssen, which is owned by pharmaceutical giant Johnson & Johnson, comes in two doses. A result on whether it works could be available in six to eight months.

Around 23,000 people in the UK have so far signed up to vaccine trials for the jab developed at Oxford University and one from US biotech firm Novavax.

So far, almost 318,000 people have indicated their willingness to take part in clinical studies by signing up to the NHS vaccine research registry. 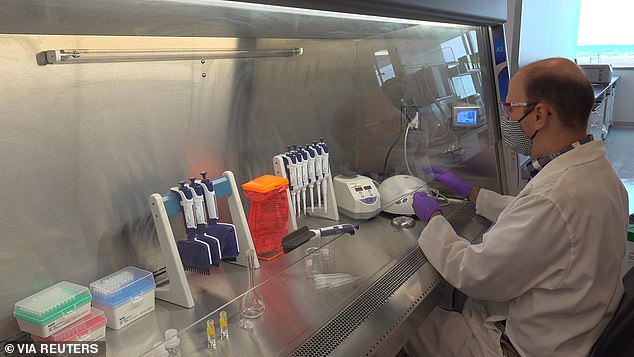 The Government has deals securing early access to 350million doses of six vaccines, including the Janssen jab.

Kate Bingham, chairman of the Government’s Vaccine Taskforce, said: ‘The recent news about progress on the search for a vaccine is enormously exciting, but we must not take our focus off continuing the important research to work out which vaccines work best for different people.’

SIX CONTENDERS IN THE RACE

This is the first coronavirus vaccine so far that has been shown to work, having been found to be 90 per cent effective in a trial of more than 43,000 people.

There are some concerns about the two-dose jab, because it needs to be largely kept in ultra-cold storage at around minus 70C.

But the interim results suggest it is one of the most successful vaccines ever developed. It uses genetic code in a fat droplet to instruct the body to make the coronavirus spike protein, which causes the body’s immune system to produce antibodies.

Ugur Sahin and his wife Oezlem are the brains behind the vaccine and the German couple’s company BioNTech is developing it with US pharmaceutical giant Pfizer. The UK is promised ten million doses by the end of the year, and 30million next year. So far only hundreds of thousands have been produced.

Results on this vaccine are hoped for this week. Up to 100million doses have been promised to the UK, and 13,000 British volunteers have taken part in global trials.

The vaccine uses a deactivated chimpanzee cold virus, containing genetic code which triggers cells to produce the spike protein on the outside of the coronavirus, so the body can recognise it and fight it off.

An international trial of 30,000 people, including 6,000 in the UK, starts today, measuring the effectiveness of two vaccine doses. It works like the Oxford vaccine, but uses a common cold virus to deliver the genetic code which triggers cells to produce the spike protein of the coronavirus.

The vaccine from US biotech firm Novavax began being tested in a UK study in September and has so far recruited 10,000 people.

The vaccine contains a synthesised copy of the coronavirus spike protein and a ‘booster’ to enhance the immune response. There are 60million doses promised to the UK, which it is hoped will be available by mid-2021.

This is a traditional vaccine unlike the more innovative design from BioNtech. The immune system is safely exposed to an inactivated version of the coronavirus.

Up to 190million doses are promised to the UK, although it has not yet been tested on people. Up to 100million of those are set to be manufactured at the company’s facilities in Livingston, near Edinburgh. It is not expected to be available until late next year.

The firm is providing its adjuvant technology and has partnered with Sanofi, Medicago and Clover Pharmaceuticals. The first results on whether one of the three traditional protein-based vaccines work are expected in the first half of next year.