Hospital patient dies after her mouth EXPLODES in a chemical reaction

A woman in India died in a freak accident with flames and smoke pouring from the mouth as she was having her stomach pumped.

The woman, named as Sheela Devi, 40, was rushed to the Jawaharlal Nehru Medical College hospital in the city of Aligarh, Uttar Pradesh state, by police on Wednesday after reportedly taking poison.

Horrifying CCTV stills show the moment  when doctors inserted a tube to suck the toxin, which they believed to be sulfuric acid, from her stomach, and flames erupted from her mouth. 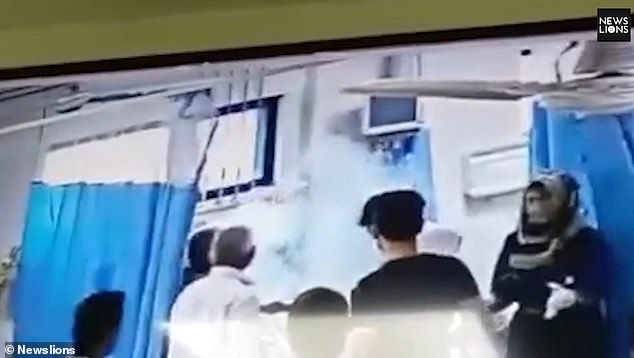 Smoke rises from flames that burst from the mouth of patient Sheela Devi, 40, as doctors attempted to pump toxins from her stomach on Wednesday

Doctors were reportedly investigating the cause of the unprecedented fatal incident, but suspect that the substance she consumed reacted either with air or with stomach acid.

‘Some explosion occurred in her mouth and flames along with smoke came out while the team of medics were trying to suck out poison from her stomach,’ the hospital’s chief medical officer SS Zaidi said.

‘There could be a possibility that she allegedly consumed aluminium phosphate which released phosphine gas in addition to aluminium oxide and other gases,’ Mr Zaidi said ‘the explosion occurred when it came in contact with gastric acid.’

Mr Zaidi believed the accident was the first of its kind in medical history. 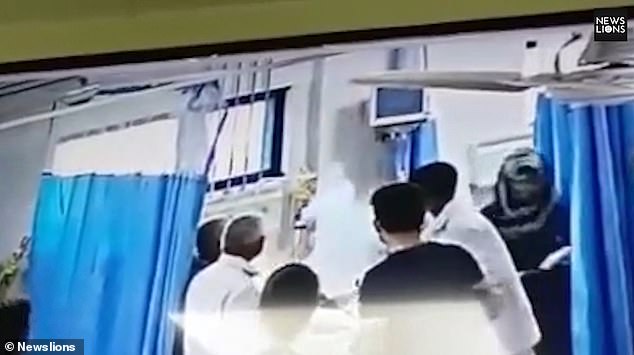 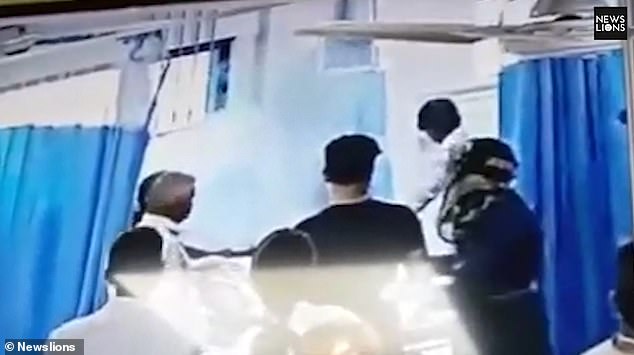 Smoke from the freak fire that erupted in a patient’s mouth begins to disperse at the Jawaharlal Nehru Medical College hospital in Aligarh, Uttar Pradesh, India on Wednesday