How a chalk in the park led to love in lockdown

All couples have a story about how they met, but Tash Pareskevi and Bruno Arena’s tale would soften the hardest of hearts. They bonded over chalk drawings on the footpath.

“You are wonderful” was the message that moved Mr Arena when he read it on the Coburg Lake Reserve pavement early last October, and from a local Facebook page he learnt it was the work of Ms Pareskevi, who he had never met. 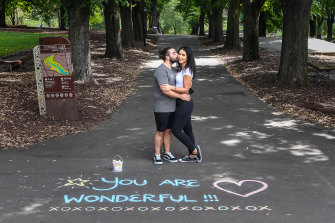 All around the lake path, she had written open-hearted affirmations in the hope of boosting strangers’ spirits, such as “You Are Loved”, “You are Unique” and “Find Joy in the Small Things”.

Mr Arena, 23, a barista, said the October lockdown was a scary time, with fears for relatives’ health and his family’s business, O’Heas Bakery. 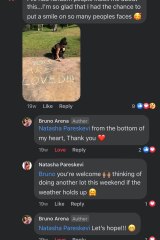 “To see these messages, this reassurance, was a beautiful thing,” he said. “I was blown away.”

He didn’t expect to fall in love. His post on the Coburg Good Karma Network Facebook Page thanking Ms Pareskevi “from the bottom of my heart” prompted her to invite him to help with the drawings.

It rained all the next week – not good for chalk – but on the next Monday, Mr Arena was walking around the lake with his cousin. Ms Pareskevi, 34, happened to be walking the other way and called out “Bruno”.

He was wearing a face mask, but she recognised his vivid green eyes from his Facebook photo. “We stood there and spoke for an hour,” Ms Pareskevi said. “After I left, I thought, ‘He is so lovely.’ ”

Mr Arena said: “Quite literally ‘you are wonderful’ is what I thought when I met her.”

The pair courted (on walks around the lake, of course). They’ve been together since.

Ms Pareskevi has had a tough past two years: on March 15, 2019, her partner Cristian Castillo, known as Fil, died aged 34 of a heart attack. She has his name tattooed on her wrist. And in January 2020, Ms Pareskevi herself had a form of cardiac arrest and had to quit her job as a sales manager.

She started the chalk affirmations last October after a friend who runs a funeral home noticed more instances of pandemic-related suicide and mental illness.

Ms Pareskevi wrote phrases such as “You Are Unique” and “You Are One of a Kind” in the hope it would be “a jolt” to help someone. Some passersby would laugh, some would cry. “Or they said that they had been feeling flat and really needed it – a reminder that they were needed in the world.”

On the weekend, with Melbourne’s third lockdown upon us, Ms Pareskevi felt the need to deliver that jolt again – to herself as much as others, and so she was out chalking.

“It brings me a lot of joy,” she said. “When I’m writing them down I’m reaffirming them for myself as well.”

For others, she said: “Maybe it’s to put a smile on their face for that day, or if someone close to them is struggling, maybe they’ll take a photo and send it to them.”

She has learnt that “we should be grateful for moments of happiness, love and joy and that we should be sharing it with the people around us. Because we never really know when the next moment is going to be our last one.”

In need of some good news?

Stories that will brighten your outlook, delivered weekly to your inbox. Sign up for our Greater Good newsletter here.