London: The catalyst for the blast that decimated downtown Beirut first floated over the horizon more than six years ago. The rusting cargo ship delivered a ticking time bomb that ran out of fuse on Tuesday.

The Rhosus, a Russian-owned ship flying the Moldovan flag, was heading from Georgia to Mozambique in late 2013 but ended up docked in the Lebanese capital after apparent technical problems. 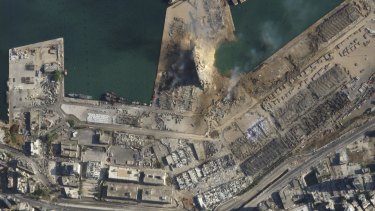 The warehouse housing the ammonium nitrate stockpile has been replaced by a huge crater.Credit:Planet Labs Inc

Following a standoff with local authorities, the vessel was allegedly abandoned by its owners amid allegations of outstanding debts and unpaid wages. Some of the crew were forced to remain on the ship.

The captain, Boris Prokoshev, was naturally unhappy about what was below decks: some 2750-tonnes of ammonium nitrate.

"We’ve been abandoned, living with no wage on a powder keg for the last 10 months," he said at the time. In a prescient description, Russian media dubbed the ship a "floating bomb".

Lebanese authorities ultimately seized the cargo and stored it in a building known at Beirut's port known as warehouse 12, according to a legal newsletter written by Charbel Dagher and Christine Maksoud, two lawyers representing the crew.

"Owing to the risks associated with retaining the ammonium nitrate on board the vessel, the port authorities discharged the cargo onto the port’s warehouses," they wrote. "The vessel and cargo remain to date in port awaiting auctioning and/or proper disposal." 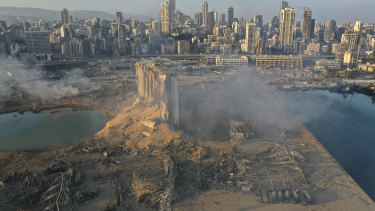 Beirut’s port sat next to the densely populated urban and financial suburbs.Credit:AP

Experts believe taking the material off the ship was the right decision – provided the stockpile was properly maintained and safely removed from the densely populated city as soon as possible.

"It's like driving a car and swerving to avoid a cat but heading for a group of school children instead," says Major Chris Hunter, a counter-terrorist bomb disposal operator whose missions to Iraq inspired some scenes in the Oscar-winning film The Hurt Locker.

"It's a really flawed logic. Of course, remove the material if it is a hazard on the ship. But you've then got to do something with it." 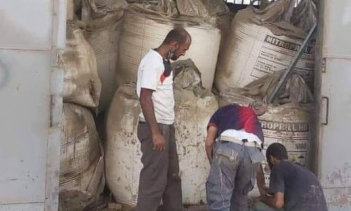 Large bags of ammonium nitrate stacked in the warehouse in Beirut.

An undated photo shows large bags labelled 'Nitroprill' stacked on top of each other inside a warehouse. Chemical giant Orica manufactures a product called Nitropril, with one 'l'. (The difference in spelling suggests the possiblity the chemicals in the Beirut warehouse were a knock-off version.)

Distinctive features of the building in the stockpile photo, such as its windows and doors, closely match footage of the warehouse as it burned on Tuesday.

For six years people of Beirut were blissfully unaware of the threat hidden in their own backyard.

Warnings about the risk of detonation were ignored. Then, just after 6pm on Tuesday, a combination of ignorance, incompetence and negligence appears to have triggered a major disaster.

Somehow, a fire started in the warehouse. The cause of the blaze is not known but it sparked a relatively small blast that sent a grey cloud of smoke into the air. Thirty-five seconds later, a much bigger explosion – believed to be caused by the ignition of the ammonium nitrate – sent a shockwave across the city.

Dozens were killed and more than 5000 injured. The homes of some 300,000 residents may be temporarily uninhabitable. The blast was so powerful that warehouse 12 is now a 140-metre wide crater. The force of the explosion even overturned a nearby cruise ship.

"You're looking at 2750-tonnes of ammonium nitrate. That's equivalent to about 1000-tonnes of TNT, so the destructive capability of something like that is huge," says Hunter. "I think it is the biggest explosion outside a military environment that I have certainly seen in my 30-year career."

One thousand tonnes of TNT is equivalent to one kilotonne. The nuclear bomb dropped on Hiroshima, is thought to have been about 13 kilotonnes.

Ammonium nitrate is chiefly used as an agricultural fertiliser but can also be an ingredient to make explosives. About two tonnes of it were in the bomb which ripped apart Oklahoma City's Alfred P. Murrah Federal Building during the 1995 terrorist attack.

It also triggered a 2001 explosion at a factory in the French city of Toulouse which killed 31 people, as well as devastating blasts in Waco, Texas in 2013 and Tianjin, China in 2015.

Documents released on Wednesday – the accuracy of which have not been challenged by the Lebanese government – show port officials fired off multiple warnings about the Beirut port stockpile. Most went unanswered. 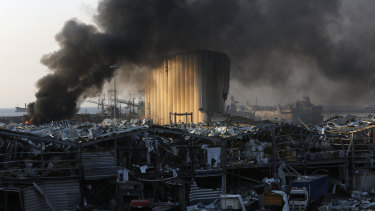 The explosion wiped out the city’s port, which is crucial for Lebanon’s already shaken economy. Credit:Getty

The Lebanese government has pledged a transparent investigation into who knew what and when. The cabinet on Wednesday ordered senior port officials into military-supervised house arrest.

Lebanese president Michel Aoun has said it was "unacceptable" for the ammonium nitrate to be stored without proper safety measures.

The Rhosus was reportedly owned by Igor Grechushkin, a Russian businessman who is now thought to be living in Cyprus. Girl, 8, ‘gang raped by 14 PAEDOS then ringleader’s mum threatens to KILL victim if she tells cops’ Ukrainian air crash victim's daughter had 'premonition' before he died Chrissy Teigen Revealed She's Been Hospitalized Due to Pregnancy Complications Chrissy Teigen Reveals She's Been Hospitalized Amid Pregnancy Bed Rest
We and our partners use cookies on this site to improve our service, perform analytics, personalize advertising, measure advertising performance, and remember website preferences.Ok