How Afghan translators who helped British troops were all-but ignored

Betrayed to the end: How Afghan translators who helped British troops were all-but ignored for years despite the Mail’s campaign – now ministers must read the stories of those left behind and hand their heads in shame

Former translators and their families reacted with fury yesterday after they were left behind by Britain as the mercy flights ended and Kabul’s airport gates closed on them.

They accused the UK of ‘abandoning’ to the Taliban men who had risked their lives beside British soldiers and said they felt ‘betrayed’.

Dozens of ex-interpreters are among 1,100 eligible Afghans and more than 120 British citizens who were forced to stay behind last night as the extraordinary evacuation entered its final hours.

Former frontline interpreter Hussain, 48, who was feared to have been a casualty in the Isis-K bombing at the airport as he waited with his family for two days, said: ‘We have been left to the enemy we fought with the British.

‘When I heard it, I wished we had been killed in the explosion at the airport. It would be less painful to be killed instantly than for the Taliban to find me and deal with me in their wild cruel way.’ 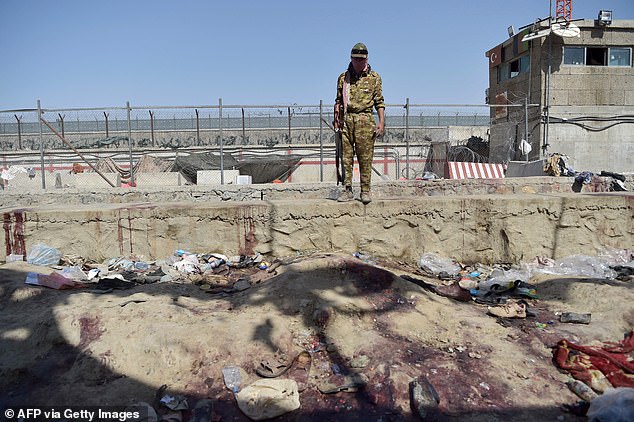 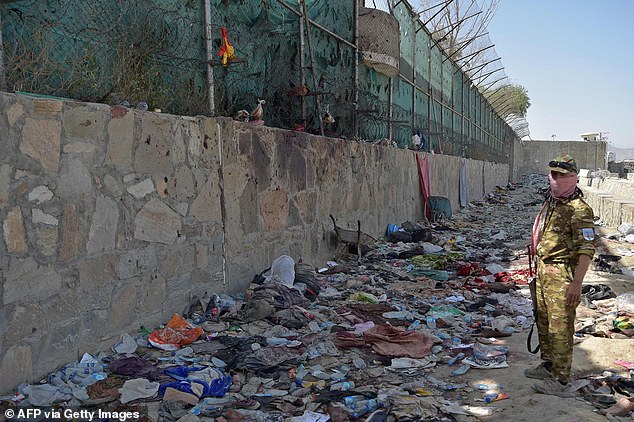 A Taliban fighter stands guard at the site of the suicide bomb which killed at least 170 people. Blood can be seen splattered across the clothes and walls

Musa, 35, a former supervisor of interpreters, said: ‘The British killed the Taliban with my help and now they will want to kill me because I have been made available to them.’

Witnesses said when it became clear the British had closed their gate providing access to the airport for the final time, there was screaming and tears from those outside. Some beat it with their fists, while others tried to climb over it.

Hundreds of translators and their families have been rescued in the 13-day airlift but campaigners estimate at least 50 entitled to relocate are being left behind.

Sixty were blocked on security grounds and another 40 have not responded to calls from the Afghan team handling their cases, raising concerns they are missing. Incredibly, 20 were said to be still waiting for a decision on their cases.

Among those also stranded are former translators who are British citizens and went back to bring their families to the UK. Wives who were recently granted visas after a court battle to join their interpreter husbands in Britain are also left behind.

During six years of its award-winning Betrayal of the Brave campaign, the Mail has highlighted the plight of hundreds of translators. It helped bring about four changes in government policy, opening the way for many of those fearing for their lives to come to the UK. 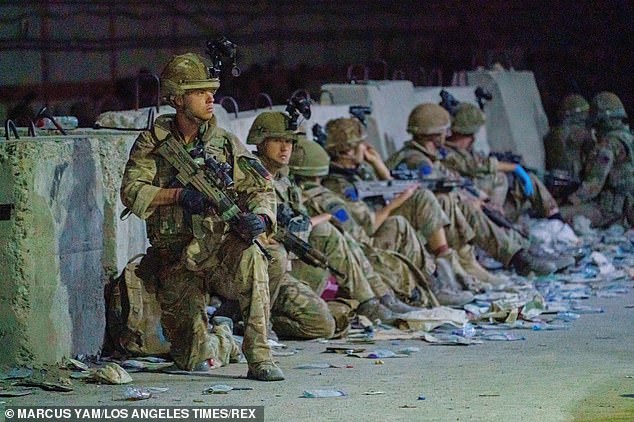 British troops were seen securing the perimeter outside the Baron Hotel, near the Abbey Gate in Kabul on Thursday following the bombing

Former translator Rafi Hottak, who was blown up on the frontlines and is now relocated in Britain, said: ‘The Government should be praised for showing compassion to allow many translators and their families to come to the UK in recent times. But it has been too slow, too mean for many years, and this has resulted in brave men being left behind.

‘The Betrayal of the Brave campaign has been tireless in its support of translators when no one wanted to listen – it has brought about change and saved many lives, which we will never forget.

‘The translators left behind now need it more than ever and we know it will be there for us.’

In Kabul, Hussain said his neighbours wanted him and his family out. They felt it was not safe to live beside an enemy of the Taliban.

‘I feel disgust and fear at being deserted,’ he added. ‘I am responsible for six children – three of mine and three of my sister’s. I thought that was secure with the promise of life in Britain but now with me a target, they face uncertainly, misery and, for me, death.’ 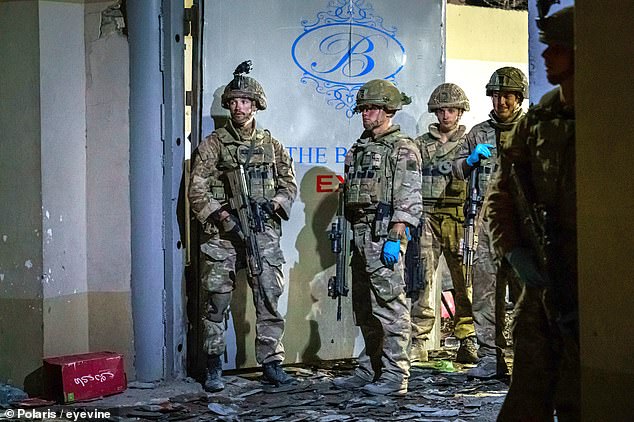 Hussain said he had gone to the British rendezvous point after being called for his flight. Despite reaching British soldiers, he had failed to make it into the airport.

‘I was so close,’ he said. ‘We were called to the gate by the British but then not let in. It is heart-breaking because, I think, Britain put the lives of many others before the interpreters.’

Musa said: ‘I am being left to them by the government of the men I could have died for. This is a disaster for me and my family – I was told to return home and wait for my call. The call did not come.

‘I am pleased for those who have escaped but this has been a betrayal of all those left behind. If one translator is killed because he could not be rescued, then all of our blood is on the hands of Britain.’

We’re left with nothing

Ullah’s family sold their home – and belongings – as they prepared for a new life free from the threat of the Taliban. Now, in the former translator’s own words, they have been ‘abandoned’ by Britain.

The 33-year-old is not just upset but confused – having been called by officials earlier this week to arrange his evacuation. 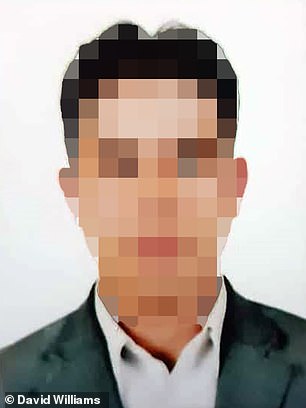 Ullah’s family sold their home – and belongings – as they prepared for a new life free from the threat of the Taliban. Pictured: Ullah

Ullah had worked for Britain’s Special Forces as part of a team known as 444, running a spy ring in the heart of Helmand. When the call for a flight came, he, his wife and four children were in their home city of Kandahar – where Taliban fighters had twice come to his home looking for him. ‘They were killing people secretly. They can do what they want now,’ he said.

‘The message from the British said to urgently go to Kabul airport. We knew it was dangerous to travel and I was being hunted. But it was more dangerous to stay, so we left within an hour, with just the small bag we had been told to bring.

‘The most important thing, we thought, was that we had the visa that would take us to the UK. But now that seems to have meant nothing. We were told to wait for the call to the airport but there has been nothing.

‘Now I am very worried. We never believed we could be abandoned. We have nothing but a small bag. We were told we would be relocating and sold everything, including our home and belongings.’

Of being told to leave Afghanistan for a ‘third country’, he asked: ‘How to do that when you are “wanted” in a country full of an enemy you once fought?

‘After the bombs, everyone is frightened. My family were crying all night. We saw what happened… it was like a battlefield.’

Aziz was waiting to be called to a flight out of Afghanistan. Instead, the Mail had to break the news yesterday that the British Government’s airlift efforts had effectively ended.

Aziz reacted with silence. Then anger. Then tears. ‘We didn’t deserve this. The British said they would save us… we didn’t spare anything when we stood beside them. Translators were killed, injured, lost legs. But still we supported them. Still we risked our lives for them. How can we not be bitter when we are being left behind? Shame on your country.’

The 40-year-old, who spent ten years with British forces, said: ‘We told them there were better ways for this to be organised. The Americans have been collecting people in buses and taking them to the airport, but not us, not those who risked the most to save the lives of your soldiers.’ 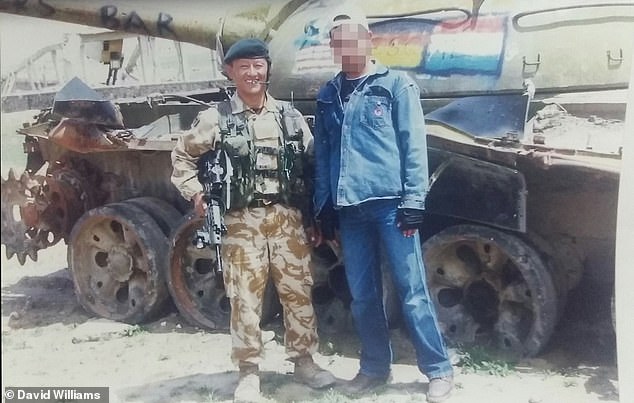 Aziz  (right) was waiting to be called to a flight out of Afghanistan. Instead, the Mail had to break the news yesterday that the British Government’s airlift efforts had effectively ended. 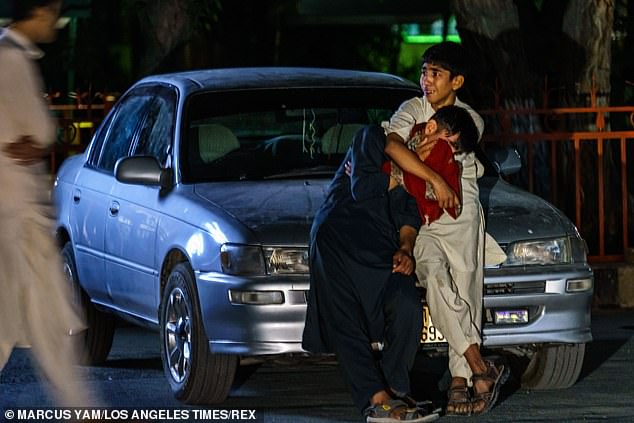 Two boys embrace each other as they weep in the parking lot at Wazir Akbar Khan hospital, in Kabul, after the blast

Aziz was initially called to an evacuation flight earlier this week. Having battled to the rendezvous point along with his family, two of their children passed out amid the crush – leading him to take the heartbreaking decision to turn back. He later returned to the airport, but left again after warnings of a potential terror attack. Kabul’s deadly bombings took place minutes after he left the scene.

Back at his hotel, he followed emailed instruction from the British team and waited for their next message. He is still waiting.

‘I will hide myself, I have no choice,’ he said. ‘I worry very much about what will happen if the Taliban find me. We are being left behind with an apology from the UK Government. An apology will not shield us from attack.’

I’m waiting for phone call that will never come

Sharif fled his home city of Lashkar Gah hours before his home was seized by insurgents as a military base. Now he is hiding in Kabul.

The 31-year-old former translator said: ‘If the Taliban find me, then they will want to kill me. To them I am a traitor. This is the consequence of the British leaving without me and my family.

‘I am sick with worry. I did not think it was possible – even after the bomb – that we would be left behind. There has been no communication at all. We have been waiting for the call to go to the airport for days now and it did not come. Now, it will never come.’ 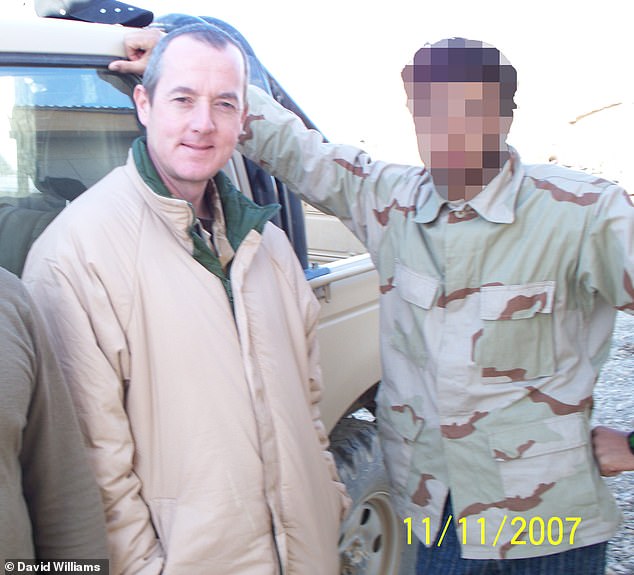 Sharif (right) fled his home city of Lashkar Gah hours before his home was seized by insurgents as a military base. Now he is hiding in Kabul

The father of four added: ‘We know the Taliban has been going door to door, looking for those like me who worked for the West.

‘They don’t want to invite us for tea. They want to punish us, and that will mean one thing.

‘We should not have been left here. It is a betrayal of those who risked their lives for UK soldiers. Reaching any country from Kabul will be difficult and dangerous.’

He now fears people ‘will betray me to the Taliban’, adding: ‘I am a stranger here and they will point us out wanting favour from the new rulers.

‘For Britain to leave us here puts me in danger and they will know that.’

Sharif, who looked after a team of 120 British Army translators, won approval to relocate to the UK just ten days ago following the personal intervention of Defence Secretary Ben Wallace.

He was among 88 former interpreters initially blocked from coming here because they were dismissed from their jobs. Sharif says he was not sacked and simply resigned.

He found out about his ‘termination’ in 2018 when he applied to relocate to Britain.