How Crown has met social responsibilities is what really counts

Crown Resorts’ operators might have gained an insight this week into what it feels like when, once again, you’ve bet the house and the numbers are not coming up in your favour.

Victoria’s royal commission into the suitability of Crown Melbourne to hold a casino licence has heard that Crown has allowed gamblers to play at its poker machines and gaming tables for 18 hours straight before forcing them to take a break. One patron went on a 34-hour gambling binge at the Melbourne casino in 2019 before staff intervened. 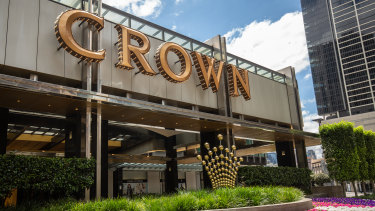 The Victorian inquiry into Crown has already been worthwhile. Credit:Scott McNaughton

Crown is facing the commission’s scrutiny after the independent Bergin inquiry in NSW ruled in February that the James Packer-backed group was unfit to run a casino in that state. Counsel assisting the royal commission Adrian Finanzio, SC, earlier this week told Commissioner Ray Finkelstein that evidence would show “serious and persistent” failures by Crown to implement its responsible gambling code of conduct, in a possible breach of its casino licence.

Crown’s general manager of responsible gambling, Sonja Bauer, told the commission that Crown had reduced the time limit patrons could gamble without a break from 24 hours to 18 last year, but said staff still had discretion on how to enforce that. That would be laughable if it were not so serious, given Crown has long been aware of research that shows gambling for more than three hours straight is a sign of possible harm.

Mr Finanzio said Crown’s policies were “an example of the most irresponsible approach to gambling” and there can be little argument with that assessment. Ms Bauer was in the invidious position of having to defend such practices. She said she “wouldn’t accept it’s an irresponsible approach when there are some measures in place to actually measure the time of play”.

This inquiry has already been worthwhile. It has shown the Victorian Commission for Gambling and Liquor Regulation to be a timid regulator and raised questions about the Victorian government’s oversight of measures to prevent gambling harm.

A report by the state’s Auditor-General released in March put the social cost of gambling in Victoria at almost $7 billion. Family and relationship problems ($2.2 billion) and emotional and psychological issues ($1.6 billion) were the two greatest costs. The report said “more than half a million Victorians experience harm from gambling each year” and that “for every individual who experiences severe gambling harm, up to six other people are affected”.

Mr Finanzio told the royal commission that people who gambled at Crown were three times more likely to experience gambling harm than those who gambled elsewhere.

The commission opened three weeks ago with an array of troubling allegations: that Crown lied to Victoria’s gambling regulator investigating how and why 19 of the casino operator’s staff were arrested in China in 2016; that Crown withheld documents from the company it hired to conduct an independent review of its handling of junket operators; that Crown’s top legal officer had threatened to call the Gaming Minister to complain about the state’s watchdog pushing the company to adopt stronger measures to combat the money laundering and criminal infiltration exposed by The Age’s investigations.

These claims will be considered within the commission’s terms of reference, which are focused on Crown’s compliance with Victorian law and regulation. They raise serious questions about Crown’s corporate responsibilities.

But what of Crown’s social responsibilities? Is it a good corporate citizen or does it pursue profit without concern for the social costs? As a condition of its licence, Crown must provide gambling services responsibly. Evidence before the inquiry brings that into question.

Crown will insist that it has put its house in order as it plays the problematic hand it has dealt itself at this royal commission. What must be assessed here is the hand Crown has dealt the Victorian community.