Fewer rights than North Korea: Chilling reality for Melbourne under Dan Andrews Stage 4 lockdown – and why he IS acting like a dictator

Melburnians are living under coronavirus lockdown rules even more severe than communist North Korea or China – despite having human rights laws.

The central Chinese city of Wuhan, the original epicentre of COVID-19, was locked down for 76 days until April while the even more repressive North Korean hermit kingdom sealed off its border city of Kaesong for just three weeks in July and August.

Melbourne, by comparison, was locked down from late March until May 24 only for 36 suburbs in the Victorian capital in early July to again be placed under strict, Stage Three restrictions.

Stay-at-home orders were also imposed on residents in public housing tower blocks near the city, leading to distressed scenes with police.

On August 2, all of metropolitan Melbourne was placed on ultra-strict, Stage Four restrictions with residents banned from straying more than 5km from home. 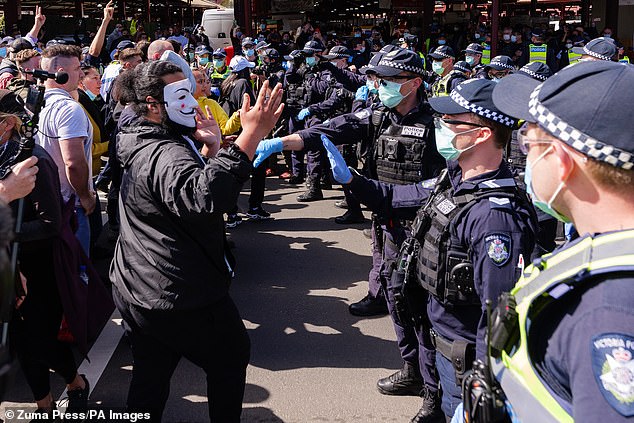 Melburnians are living under coronavirus lockdown rules even more severe than communist North Korea or China – despite having human rights laws. Pictured is a September 13 protest in Melbourne against the Stage Four lockdowns 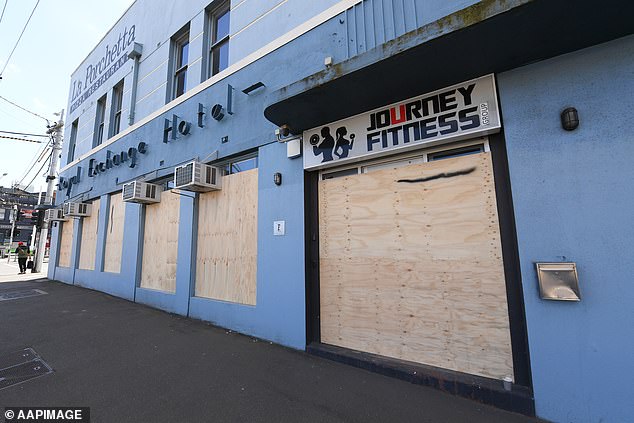 Melbourne has been locked down from late March until May 24 only for 36 suburbs in the Victorian capital in early July to again be placed under strict, Stage Three restrictions. Pictured is a boarded up hotel

Melbourne’s five million residents are also fined $1,652 if they are outside between the hours of 8pm and 5am – despite police not requesting a curfew.

Restrictions are set be extended into late October, unless there were fewer than five new daily cases over two weeks.

He argued Victoria’s Socialist Left faction Labor Premier Daniel Andrews was even harsher on Melburnians than the communist governments of China and North Korea as part of a flawed elimination strategy.

‘I doubt that our government is uniquely brilliant.

‘Rather, the Andrews’ government is poor at assessing the side-effects of a six month lockdown.

‘I suspect that the saturation media coverage of the pandemic has unfortunately diminished the capacity of key government officials to engage in rational thinking; and instead their decisions are simply being driven by their feelings and a fanatical desire to flatten a curve – no matter what it takes.’

Unlike Victoria, children in China and North Korea are also attending school.

Ironically, Victoria in 2006 introduced a Charter of Human Rights and Responsibilities Act that supposedly guaranteed ‘freedom of movement’ where ‘every person lawfully within Victoria has the right to move freely within Victoria’. 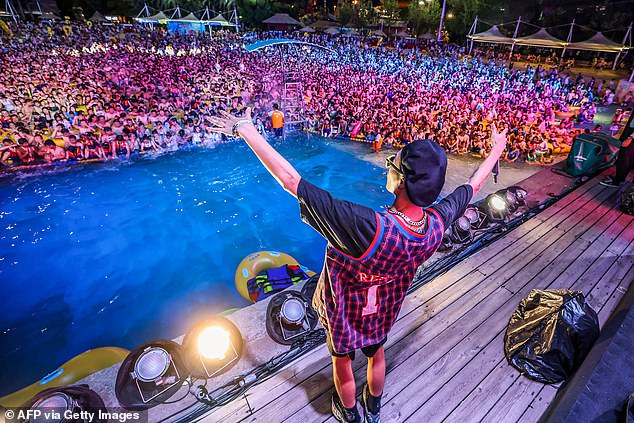 The central Chinese city of Wuhan, the original epicentre of COVID-19, was locked down for 76 days. Pictured is an August 15, 2020 pool party with thousands of people attending 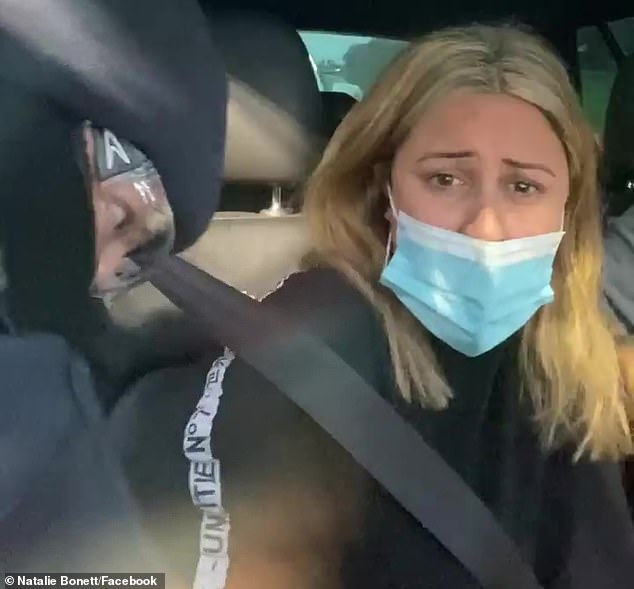 Despite Victoria’s Charter of Human Rights, there have been a spate of brutal police incidents caught on video, including the apprehension of Natalie Bonett, 29, who police on Saturday stopped in the Mitchell Shire town of Wallan

The charter also stipulated that anyone arrested must receive ‘humane treatment when deprived of liberty’.

Despite that, there have been a spate of brutal police incidents caught on video, including the apprehension of Natalie Bonett, 29, who police on Saturday stopped in the Mitchell Shire town of Wallan.

Officers were recorded pulling her from her car after telling her it was illegal to have a mobile phone attached to a windscreen-mounted car charger.

Professor Bagaric said Mr Andrews had overridden the charter of human rights introduced by one of his Labor predecessors Steve Bracks when he was a backbencher in Parliament.

‘If a charter of rights was in the constitution, it would do nothing to protect Victorians from these draconian laws,’ he said.

‘This is because rights all rights can be overridden by other more important rights or the common good.

‘The Premier would just say that the risk to the right to life from COVID overrides all other rights.’

The Victorian government has relied on Victoria’s Health and Wellbeing Act of 2008 to impose the pandemic rules.

Professor Bagaric said this demonstrated the flaws of the human rights charter.

‘Victoria was the first state to enact a bill of rights and has resulted in a well-paid human rights industry,’ he said.

‘Where are these rights fanatics when we need them to rescue the community from oppressive laws? 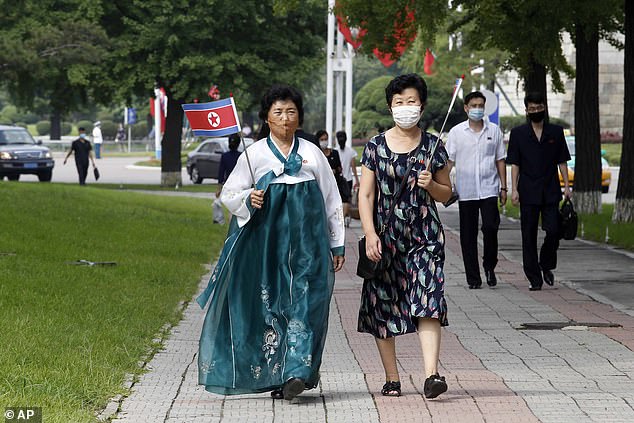 The even more repressive North Korean hermit kingdom sealed off its border city of Kaesong for just three weeks. Pictured are women holding national flags in the capital Pyongyang on September 9, 2020

‘They are muted because when push comes to shove, rights are vacuous concepts that can be readily brushed aside.’

Nonetheless, Professor Bagaric said aspects of Victoria’s pandemic response were illegal under Section 200 of the Public Health and Wellbeing Act 2008. 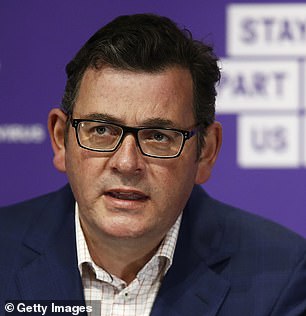 ‘The only restrictions that will withstand this challenge are those that are proportionate and adapted to reducing the spread of virus,’ he said.

‘Bans on activities which do not involve human contact or congestion, such as golf, fishing, single person real estate inspection are probably unlawful.’

Greg Barns, a Senior Counsel barrister who is also the national criminal justice spokesman for the Australian Lawyers Alliance, said people wrongly arrested in Victoria could sue the police using either the charter of human rights or civil law.

‘If you prove assault in a civil claim you are entitled to damages,’ he told Daily Mail Australia.

Unlike Professor Bagaric, Mr Barns said the pandemic did not override the state’s charter of human rights.

‘More broadly, though I would say yes we need strong national protection in this area by way of a national bill of rights,’ he told Daily Mail Australia.

‘There are gaps basic human rights protection across Australia, which is especially concerning in the midst of a pandemic when governments able to exercise truly extraordinary powers.’