How Trump-fed conspiracies about the caravan mix with deadly hatred

Murphysboro, Illinois: Alicia Hooten thinks the country has plenty of problems. "So many. So many," she said warily, before settling on the one at the top of her mind with the midterm election just a week away. "I feel like we're fighting for our freedom when it comes to our borders." 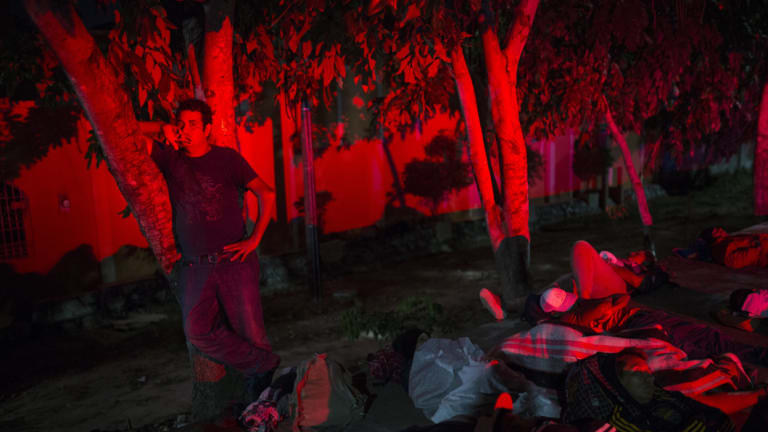 A man stands among other migrants while waiting for a ride on the side of the road, as a caravan of Central Americans continues its slow march toward the U.S. border, near Tapanatepec, Mexico.Credit:AP

She spoke while waiting for President Donald Trump's campaign rally Saturday, hours after the deadly shootings in Pittsburgh. Hooten, a graphic designer from nearby Sparta, Illinois, said she was especially concerned about the caravan of migrants in southern Mexico, calling it "a ploy to destroy America, and to bring us to our knees."

For the past two weeks, Trump and his conservative allies have operated largely in tandem on social media and elsewhere to push alarmist, conspiratorial warnings about the migrant caravan more than 2000 miles (3200 km) from the border. They have largely succeeded in animating Republican voters like Hooten around the idea of these foreign nationals posing a dire threat to the country's security, stability and identity.

Trump described them as "an invasion of our country" on Monday and his administration announced plans to deploy at least 5200 active-duty troops to the southern border by the end of this week, its biggest show of force yet in confronting the migrants

But as the country processes the cumulative trauma of two actual crises that occurred inside its borders — a spate of pipe bombs sent to the president's political opponents, and the massacre of 11 people at a synagogue by a man who spewed anti-Semitic vitriol and called immigrants "invaders"— there is clear overlap between the hatred and delusion that drove this lethal behaviour and the paranoia and misinformation surrounding the caravan. 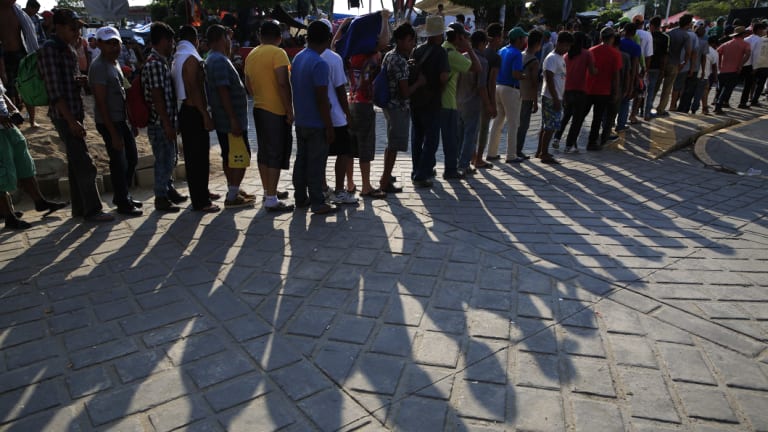 The baseless claims that George Soros is financing the migrants as they trek north, which carry a strong whiff of anti-Semitism, have been one of the most consistent themes of commentary on the caravan from the right. And their persuasive power was evident over the weekend in interviews at the president's rally in Murphysboro, where several people described Soros, the liberal billionaire philanthropist, as the caravan's mastermind and made assertions like "I'm positive he's the one behind it,""it looks a tad staged," and "all these people are being paid off."

Trump tweeted a video October 18 that purported to be of someone connected to Soros handing out cash to the migrants — one of several insinuations and attacks on Soros by Republican leaders and candidates this fall. Then, on October 22, a pipe bomb was found at Soros' house; Police have charged a Trump supporter, Cesar Sayoc, with mailing the bombs to Soros and other Democrats who the president frequently criticises.

Robert Bowers, who was arrested in the assault on the Pittsburgh synagogue, also pushed online conspiracy theories about the migrant caravan, in addition to anti-Semitic diatribes.

Trump and Republican officials have shown no signs of backing off their approach to stoking fears about the caravan in the final days of the election season. Just a few hours after the synagogue killings on Saturday, Trump again referred to the midterms as "the election of the caravan," as he has done at other political rallies recently.

"The reason why the caravan has resonated so much on the right is because it is the literal, physical representation of what Republicans don't want to see happening at the border," said Andy Surabian, a former aide to the Trump presidential campaign and White House. "I can't imagine a clearer picture to be painted to illustrate this issue to Trump voters." 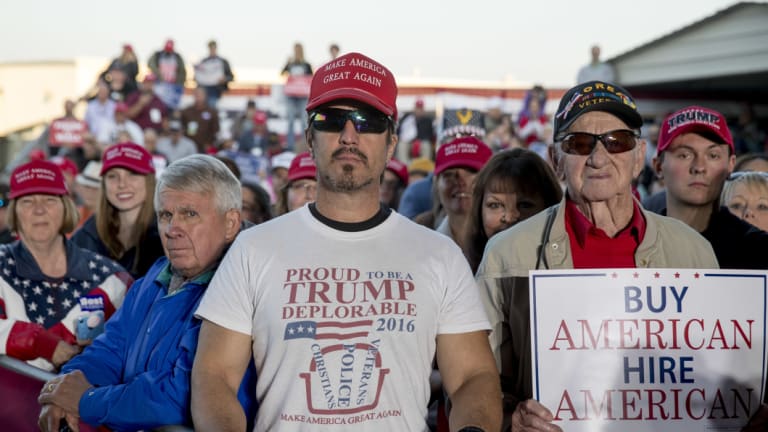 A member of the audience wears a shirt that reads “Proud to Be A Trump Deplorable” as President Donald Trump speaks at a rally at Southern Illinois Airport in Murphysboro, Illinois.Credit:AP

With the kind of dark language usually reserved for true catastrophes like the September 11 attacks, conservative commentators and politicians have led a concerted push to elevate the caravan as an issue. They have called it "an invasion,""a national emergency,""an illegal alien mob,""an attack on America," and a crisis with implications that are "critical to the future of our civilisation."

These outcries, which have included unfounded claims about the caravan's origins and wildly fluctuating estimates of its size, are playing out in a clear pattern. They often start with right-wing commentators, conspiracy theorists and activist groups with large followings; their talk then breaks through more broadly on Fox News, Breitbart News and other outlets that are popular with conservative voters; and ultimately Trump tweets or remarks about them, acting as an amplifier and a validator.

Apart from concerns of domestic terrorism, any number of threats, foreign and domestic, have been simmering in the weeks leading to the election, like the killing of a Washington Post columnist inside the Saudi Arabian Consulate in Istanbul, though none of them have received as much attention from the president and his allies as the migrant caravan.

Even a massacre of fellow Americans lacks the singular power of illegal immigration as a galvanising factor for some fervent Trump supporters. And no immigration issue is as vividly captured as the caravan — in images and videos broadcast repeatedly and shared widely on social media, some of them misleading or unproven, that show thousands of Latin Americans making their way toward the United States. The president has shared some of these mislabelled images himself.

That imagery has also made the caravan ripe for exploitation by conservatives who have spoken in hyperbolic, sometimes frightening terms. Over the weekend, Breitbart News posted a story about the migrants possibly having "diseases that could pose a threat to public health."

Fox & Friends, the president's preferred morning news program, aired an interview Sunday with a man who said through a translator that he was trying to get to the United States so he could ask for a pardon for his attempted murder conviction.

Newt Gingrich, the former House speaker and a confidante of Trump's, surmised in an interview with Fox News, "If you were a terrorist and wanted to get in the United States and you saw 10,000 people trying to get into the United States, how unlikely is it that you might decide to join them?"

(The size of the caravan has fluctuated over the course of the past two weeks, but it now numbers in the thousands.)

Michael Savage, the conservative radio host, estimated the caravan's size at 14,000 on his program last week as he predicted its eventual arrival would spell "the end of America as we know it."

Trump believes that focusing on illegal immigration is a winning strategy for him, and his advisers have come to share that view, armed with polling data that show that the issue continues to be a top priority for Republican base voters. They are using the caravan to raise broader fears as well about what they portray as a broken, permissive immigration system that is weakening the country culturally, financially and even physically.

Republican officials are aware of the political downside of highlighting the issue, which tends to turn off suburban women and college-educated white voters, but have calculated that using fear of crime and terrorism can neutralise that disadvantage. And they believe that Democrats have overplayed their hands on immigration because of calls by some of their prominent leaders for the abolition of Immigration and Customs Enforcement, the agency charged with deportations.

That is why Trump — and many Republican candidates who have followed his lead — have been touting their support for ICE, and highlighting MS-13, the brutal transnational gang with roots in El Salvador, as well as the risks of sanctuary cities that limit their cooperation with federal immigration authorities.

Of the dozen people interviewed at Trump's rally, almost all of them spoke in considerable detail about their concerns over immigration. Hooten, the Trump supporter at the rally Saturday, blamed Soros, Hillary Clinton and former President Barack Obama for the caravan.

"I think they're all involved in this. I feel it's treason," she said.

Another person at the rally, Jeff Hutson of Columbus, Kentucky, called the caravan "a smokescreen"— no different from a lot of other big news stories he said he thinks are intended to distract Americans. "I think we've had a lot of that going on," he said. "I think a lot of the shootings we've had — anything big to draw attention away from something else that's going on."

The language and imagery of danger lurking within the caravan started almost immediately after its existence was reported this month. In some cases, as evident from the unproven claim that Middle Easterners were hiding among the migrants, that rhetoric traces a path from right-wing activists online to Trump.

The Centre for Immigration Studies, a group the president has cited in the past for its research promoting his immigration policies, was among the first to report October 16 on claims by the president of Guatemala — made before the caravan had formed — that his country had captured and deported 100 people with ties to the Islamic State group.

On October 18, Judicial Watch, a conservative group that spends much of its time on endeavours like lawsuits to retrieve documents from Hillary Clinton's time as secretary of state and investigations of alleged voter fraud, published a piece on the Guatemalan president's statement, warning, "Why should Americans care about this? A caravan of Central American migrants is making its way north."

Three days later, on October 21, the group's president, Tom Fitton, appeared on Fox & Friends to discuss its report and said that Guatemala had become "a way station" for terrorists.

The next morning, at 8:37, Trump tweeted about the caravan, "Criminals and unknown Middle Easterners are mixed in," a claim he later walked back because he said he did not have evidence. The next day, however, a Department of Homeland Security official tweeted that citizens from all over the world, including the Middle East, were travelling with the caravan.

Not that such alarming language is out of the ordinary for the president. At a political rally in Kentucky this month, Trump declared that Democrats "want to open America's borders and turn our country into a friendly sanctuary for murderous thugs from other countries who will kill us all."