Human remains found in a national park in remote northern Wyoming are those of missing Gabby Petito, the FBI has confirmed, with the manner of death given as homicide.

The 22 year old disappeared while on a cross-country road trip with her boyfriend, Brian Laundrie, who is now being sought by authorities in Florida.

Teton County Coroner Brent Blue determined her manner of death was homicide but did not disclose a cause of death pending final autopsy results, officials said Tuesday. Laundrie, 23, has been named a “person of interest” but has not been seen since leaving his family’s home on Tuesday.

Investigators have been searching for Laundrie in Florida’s Carlton nature reserve after his parents told FBI agents they last saw him one week ago when he told them he was planning to hike alone in the 24,000-acre wilderness area.

Authorities are using helicopters, drones, dogs, and officers in all-terrain vehicles in their search for Laundrie, with around 75% of the search area underwater. On Monday, the FBI went to Laundrie’s parents’ home in North Port and removed several boxes and towed away a car that neighbours said Laundrie’s mother typically used.

Laundrie and Petito had been living with his parents at the North Port home before the road trip.

The young couple had set out on the trip in July but got into a fight along the way. Police released bodycam footage showing the moment an officer pulled the couple’s van over on the same day it was seen speeding and hitting a curb near Arches National Parj.

The footage showed an upset Ms Petito, and police separated the couple for a night.

In the footage, Gabby Petito cried as she told the officer she and Laundrie had been arguing over her excessive cleaning of the van. 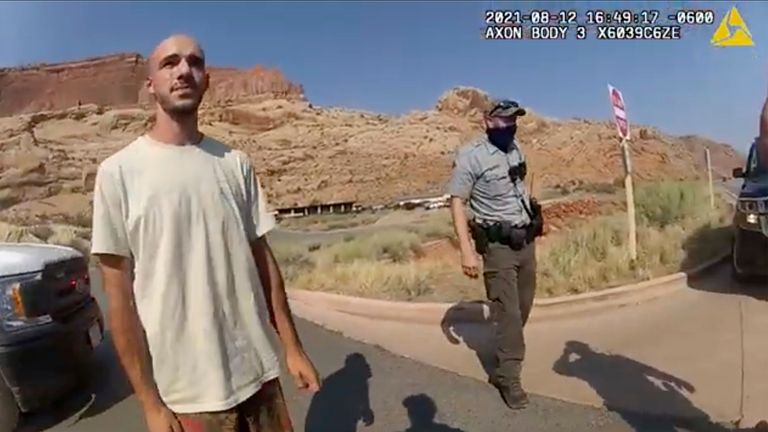 She posted her final photo of the trip on social media the next day.