Caught with his pants down: Looter is tied up and humiliated as punishment for trying to steal during Russian attack on Kyiv

A man who was allegedly caught looting in Kyiv during the Russian attacks on the city was strapped to a lamp post as punishment.

The images, which were taken in the capital today, show how proud Ukrainian’s are fighting back against lawless criminals wanting to take advantage of the ongoing chaos.

They show a man tied to the street furniture in front of an AMIC petrol station, with his trousers pulled down to his knees.

A man can be seen heatedly speaking to the alleged looter, while two police cars can be seen in the background. 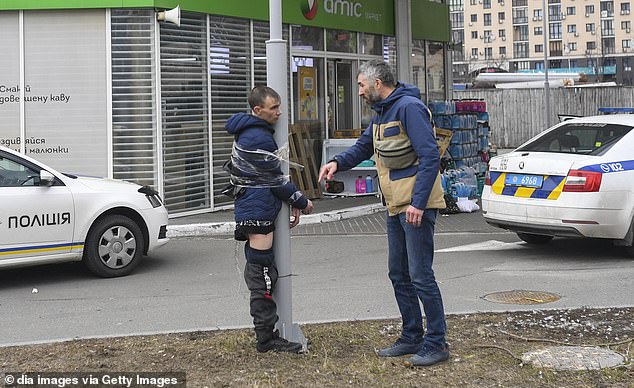 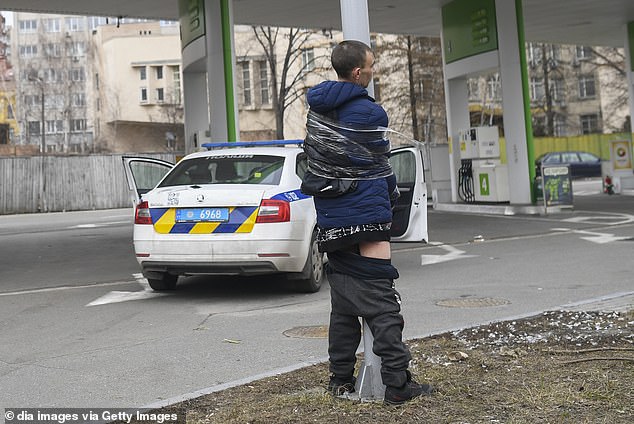 There are reported to have been scenes like this across the country, where proud Ukrainians try to fight back against lawlessness

There have been reports of looting in areas across the country since the invasion began, with criminals targeting supermarkets, petrol stations and banks.

While the armed forces have been occupied trying to repel Russian invaders, civilians have taken it upon themselves to try and stamp out the problem.

Pictures and videos have emerged on social media from towns and cities across Ukraine showing similar scenes.

Many show people tied to lamp posts or telephone poles, with some having a cardboard sign denoting they are a looter placed next to them.

Members of the public have been seen shouting and haranguing those who have been caught.

Some have even been beaten and forced to strip naked in the snow, according to The Spectator.

It’s not just civilians who have been seen looting in the war-torn country.

Russian soldiers have also been seen raiding supermarkets and banks as they advance further into the country.

Ukrainian president Volodymyr Zelensky said last week that fighting was taking a toll on the morale of Russian soldiers, who ‘go into grocery stores and try to find something to eat.’

Some claimed that the Russians who were captured were found with rations on them which had expired in 2015.

Western officials have reportedly said they believe some of the young Russian troops do not want to fight and are sabotaging their vehicles, puncturing the gas tanks.