Around seven hundred cats have been rescued in northern China after they were found locked up in a filthy backyard ‘ready to be served as food’.

Heart-wrenching footage shows the poor felines whining in pain while being crammed inside a dozen rusty cages in Linfen, Shanxi province.

Many of the moggies were believed to be stolen and animal traffickers were planning to sell them onto restaurants to be slaughtered for their meat, sources told MailOnline. 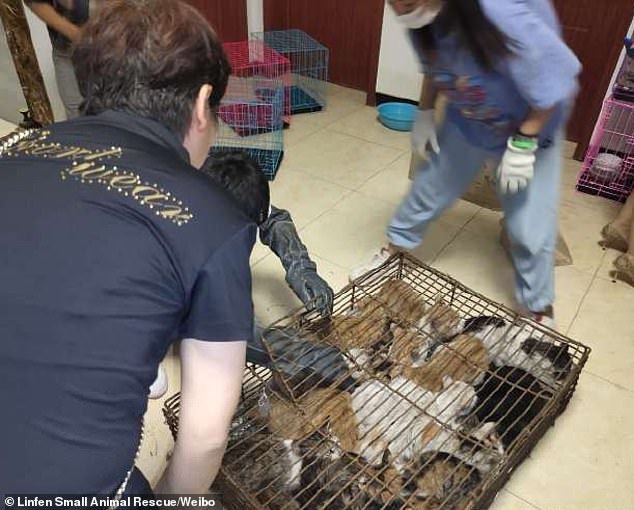 The picture shows some of the kittens being rescued by a local animal welfare organisation in Linfen, Shanxi province after they were found hidden at a hotel’s backyard yesterday 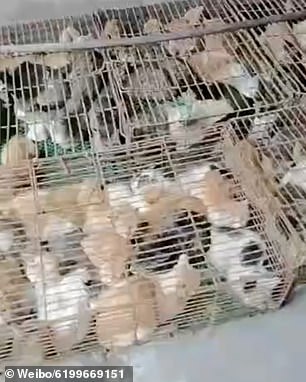 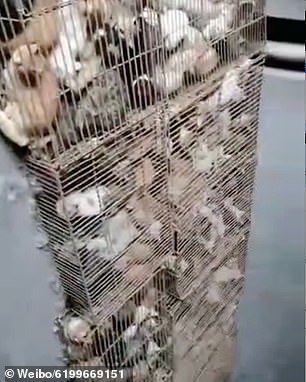 Pictures above show screenshots of the heart-wrenching footage showing the poor felines whining in pain while being crammed inside a dozen rusty cages in Linfen, Shanxi province

The cats are being looked after and will be re-homed soon, a local animal rescue group said today.

The horrific scene was captured on camera yesterday by an animal lover, known by her surname Li, who uploaded the footage online.

Ms Li discovered the cats in the backyard of a budge hotel after being alerted by some labourers who worked there.

She told reporters that the animals had been brought in from different places and were waiting to be transported.

Shocked by the scene, Ms Li can be heard in the footage saying: ‘Hundreds of cats here, hundreds.

‘They are waiting to be served as food on the table. Help them.’

The group told MailOnline that all of the cats, amounting to 700 or so, had been rescued and were being looked after by its volunteers.

‘We have moved pretty much all of them into pet cages. We are giving them water and food,’ a spokesperson said.

‘Vets are checking if there are any injured or ill cats.’

A clip released by the organisation shows Linfen police arriving at the hotel shortly after the incident.

The local authority is investigating the matter, according to reports. MailOnline has contacted the police for comments on the matter. 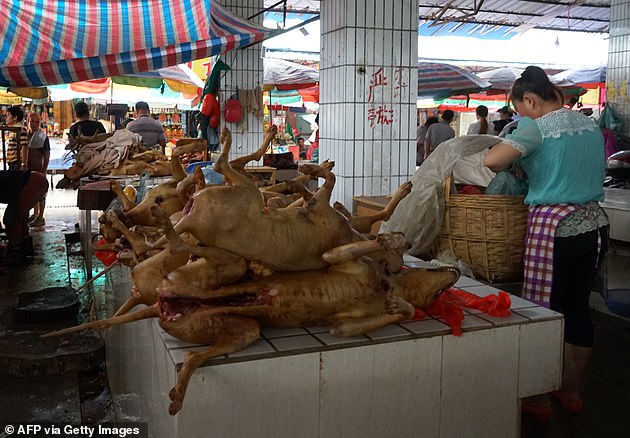 Two Chinese cities banned their residents from eating dogs and cats with a new law. In the file photo, dog carcasses are stacked at a dog meat market in Yulin, China, on June 21, 2017 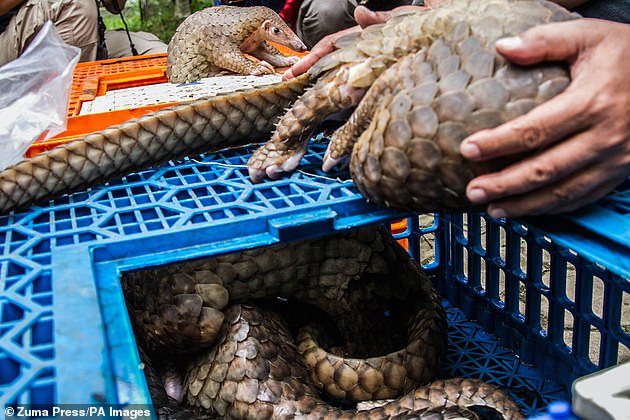 Chinese authorities increased the protection level of pangolins from class two to class one. Pictured, officials show a live pangolin after an anti-smuggling attack in Indonesia in 2017

The news comes as China has stepped up its protection efforts for animals – particularly wildlife – in the wake of the coronavirus outbreak.

Experts in China said in January that the coronavirus had likely jumped onto humans from wild animals sold as food at a wet market in Wuhan, a city of 11million in central China.

In the following month, China’s central government blocked all trade and consumption of wildlife with a temporary law in response to the health crisis.

Two Chinese cities banned their residents from eating dogs and cats with a new law in response to the global health crisis.

Last Friday, Chinese authorities increased the protection level of pangolins from class two to class one. The move means anyone found guilty of hunting and trading the critically endangered animals would face double the jail term.