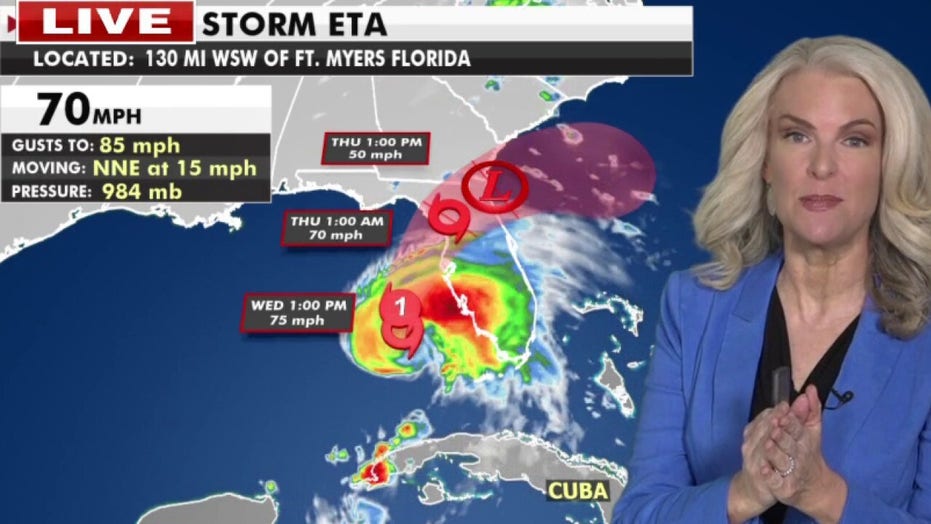 A revigorated Eta strengthened into a hurricane off the southwest coast of Florida on Wednesday morning and is now taking aim at the state's West Coast.

The National Hurricane Center (NHC) in Miami said that a NOAA Hurricane Hunter aircraft and Doppler radar data show Eta has now restrengthened into a hurricane, packing maximum sustained winds of 75 mph. The storm is located about 145 miles south-southwest of Tampa, moving north-northeast at 10 mph.

According to the NHC, Eta will move closer to the Florida coast throughout the day on Wednesday. The storm is then expected to make landfall somewhere along the west-central coast by Thursday and then move inland. 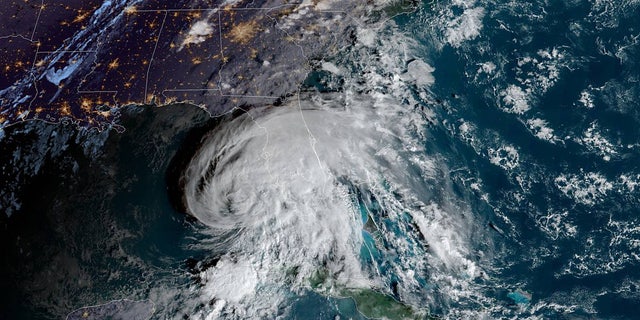 Hurricane Eta can be seen swirling off the southwest coast of Florida on Nov. 11, 2020.
(NOAA/GOES-East)

Eta will then move across the state, ending up in the Atlantic by late Thursday or early Friday.

While Eta may have strengthened into a hurricane out over the warm waters of the Gulf of Mexico, forecasters from the NHC said the storm is expected to rapidly weaken after making landfall on Thursday. 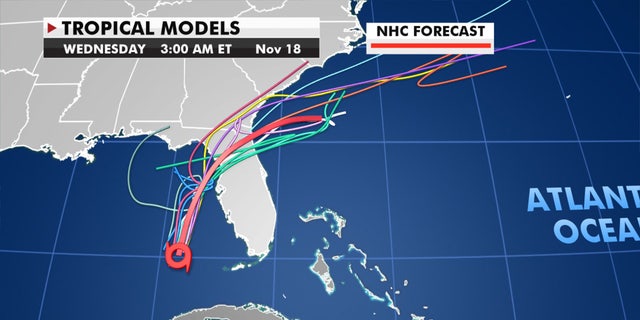 "Expecting landfall sometime tomorrow morning," Dean said. "This is the second landfall for Florida and flash-flooding is going to be the big concern." 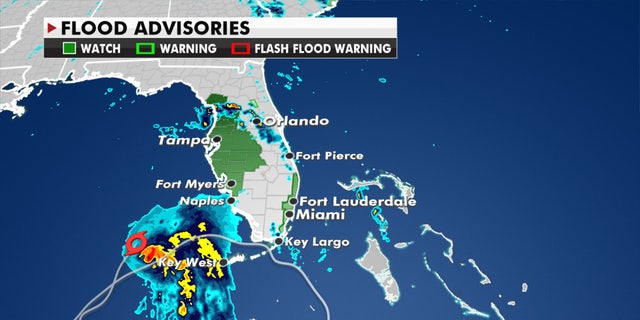 Flood watches have been issued in advance of Hurricane Eta.
(Fox News)

Heavy rain will be the main threat into west-central Florida starting on Wednesday and lasting through Friday. 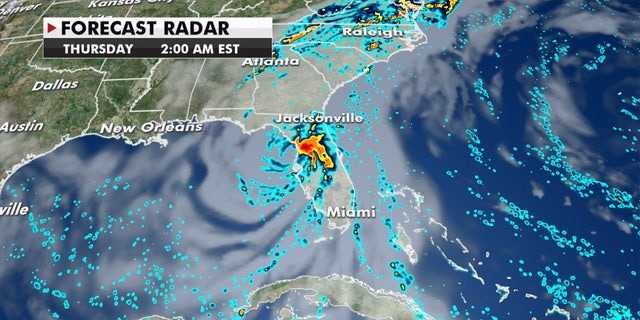 Eta is forecast to move across northern Florida after making landfall.
(Fox News)

Between two to four inches of rain will be possible with the risk of flash flooding. Strong winds and isolated thunderstorms will also accompany the system.

A tornado watch has been issued for parts of Florida's West Coast until 5 p.m. on Wednesday as the storm approaches.

Eta barely hit land late Sunday as it blew over Lower Matecumbe Key in its first Florida landfall on its way into the Gulf of Mexico, but the storm dumped water over densely populated neighborhoods from Monroe to Palm Beach counties. Some areas of South Florida are expected to see up to 23 inches of rain by the time the storm moves out.

Officials said the storm caused a "100-year" flood event in South Florida that was different from a typical hurricane. Already saturated ground made Eta's rains even worse.

“Once the ground becomes saturated, there’s really no place for the water to go,” Fort Lauderdale Mayor Dean Trantalis told the Associated Press. 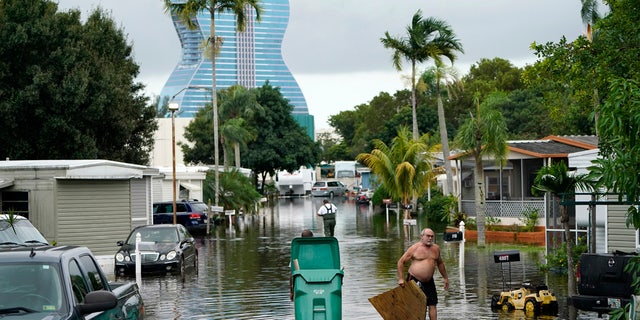 Residents clear debris from a flooded street in the Driftwood Acres Mobile Home Park in the shadow of the Guitar Hotel at Seminole Hard Rock, in the aftermath of Tropical Storm Eta, Tuesday, Nov. 10, 2020, in Davie, Fla.
(AP Photo/Lynne Sladky)

Sunshine returned to many neighborhoods on Tuesday, but floodwaters from the storm stuck around. Residents in Fort Lauderdale's Melrose Park neighborhood voiced their frustrations.

“Getting up in the morning and smelling mildew, smelling the water that’s sitting some feet in your house, and not knowing what to do and can’t do anything, you feel hopeless,” Selena Cook told WSVN-TV. “I didn’t sleep last night. I did not sleep. I tried. Every time it rained, I jump and look out the window.” 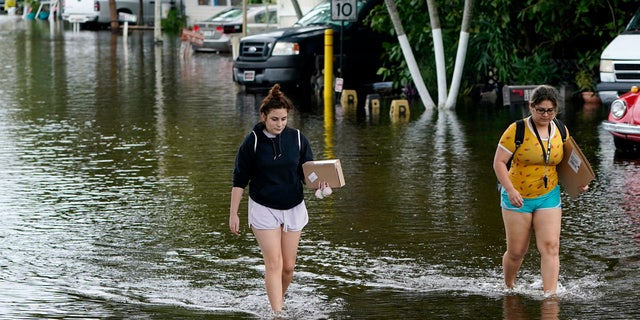 As the storm takes aim at the Tampa Bay area, officials in Pasco County set up self-serve stations for residents to get sandbags, FOX13 reported.

The approaching Eta forced the closure of schools on Wednesday in Charlotte County, Fla.

"We hate to do this at such a late time in the morning, but it’s for the safety and well-being of the children, staff, and parents of Charlotte County public schools. Schools are canceled for today," Charlotte County Schools Community Liaison Michael Riley said in a statement to FOX4. "This decision was not made lightly, but we feel that it is the best possible decision to ensure the safety of your children, their families, and our staff.”

In Pinellas County, the COVID-19 test site at Tropicana Field has closed ahead of any impacts from Eta. The approaching storm also caused a Veterans Day ceremony in St. Petersburg to be postponed, according to FOX13. 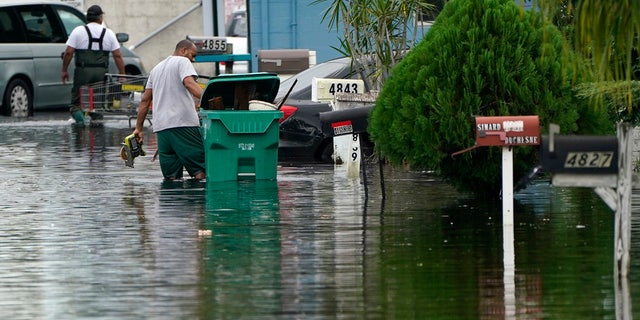 Eta was once a Category 4 hurricane before it slammed into Central America on Election Day, and authorities from Panama to Mexico were still surveying the damage following days of torrential rains during the week. 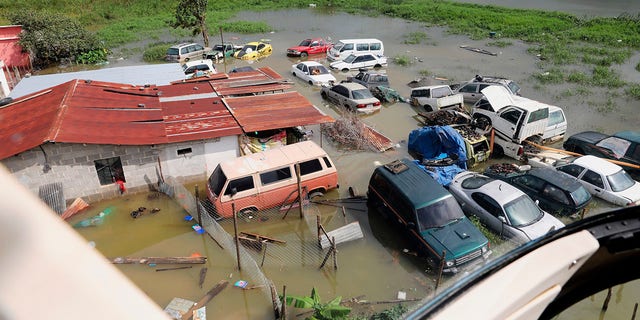 The storm killed nearly 70 people from Mexico to Panama, before moving into the Gulf of Mexico early Monday.

Eta is the 28th named storm of a busy Atlantic hurricane season, tying the 2005 record for named storms. It was followed on Monday by the 29th storm — Theta. Miley Cyrus Reveals She Is 2 Weeks Sober After Coronavirus Pandemic Setback
We and our partners use cookies on this site to improve our service, perform analytics, personalize advertising, measure advertising performance, and remember website preferences.Ok