SWATHES of northeastern US including New York City were under tornado and flash flood emergency warnings Wednesday night as powerful remnants of Hurricane Ida brought twisters and biblical downpours — leading to subways being flooded and buildings destroyed.

National Weather Service New York announced on Wednesday night that a tornado warning was in effect for some areas until 9.30pm and a flash flood emergency was put in place until 11pm. 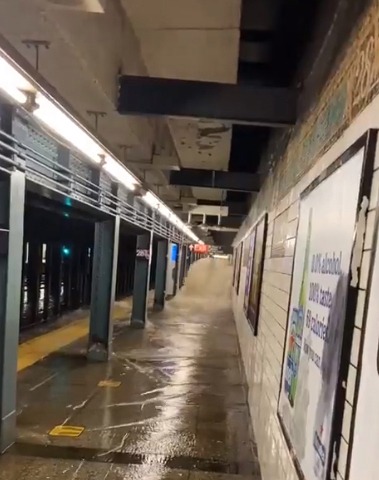 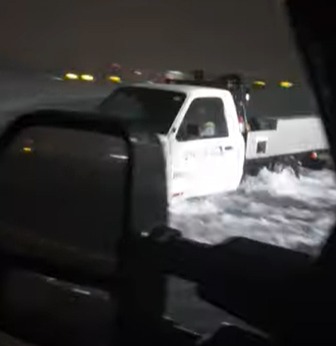 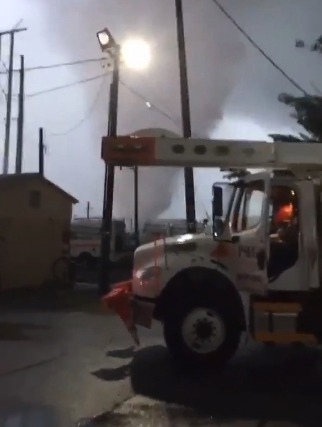 The alert noted that a tornado was possible, along with pea-sized hail.

The notice urged people to move to higher ground immediately and avoid walking or driving through floodwaters.

Minutes later he urged: "Please stay off the streets tonight and let our first responders and emergency services get their work done.

"If you’re thinking of going outside, don’t. Stay off the subways. Stay off the roads. Don’t drive into these heavy waters.  Stay inside."

As the storm raged through the New York metro area, dozens of people took to social media to share what they were seeing.

One Twitter user uploaded footage of water pushing its way into a subway station in Harlem.

Their tweet read: "The 2/3 platform at 116th Street in Harlem is completely flooded."

Another person shared a video of water aggressively flowing into another NYC subway station.

"Flooding in 28th St Station NYC!!! And everyone is taking videos!!!!#OnlyInNYC," read the tweet.

Meanwhile, a driver, who reportedly got stuck in several feet of water in Staten Island, had to be rescued by emergency personnel, according to the Lakewood Scoop.

A video, uploaded onto YouTube, captured flooding near where the planes were parked.

"Lol flight is cancelled, Newark airport is flooding, idk where our checked bags are and there’s NO FOOD. I love it here," someone tweeted.

The floodwater also appeared to enter the airport, according to other footage.

The National Weather Service reported that "a confirmed large and extremely dangerous tornado was located over Woodbury Heights" in New Jersey at around 6.30pm.

"My cousin just posted this video from the Burlington @PSEGdelivers station," another tweet read. "Her dad was under a truck that was hit by this tornado, but is luckily he’s OK. Please send good vibes to the folks in New Jersey. Weather is no joke."

"We will use every resource at our disposal to ensure the safety of New Jerseyans. Stay off the roads, stay home, and stay safe," he said. 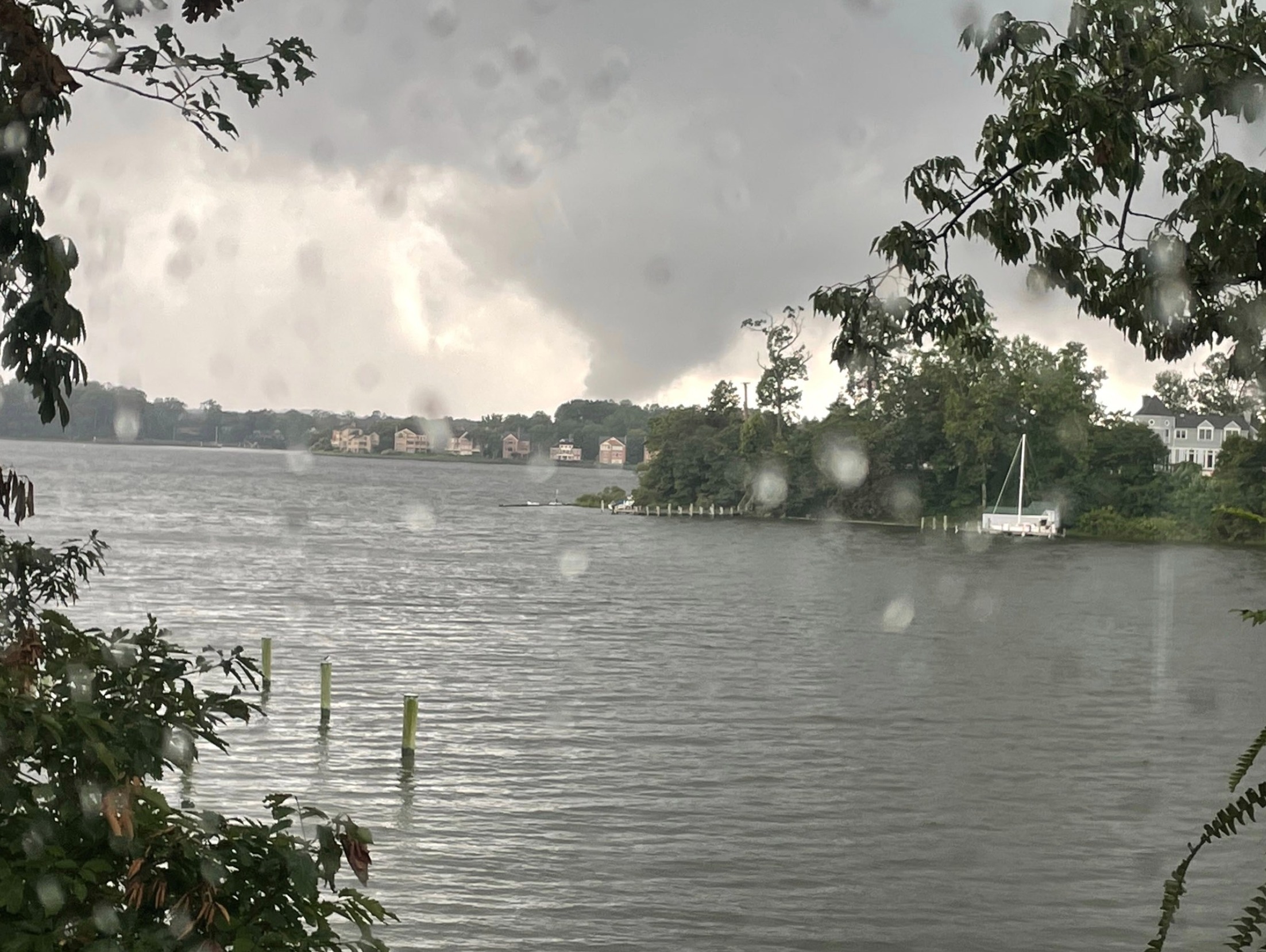 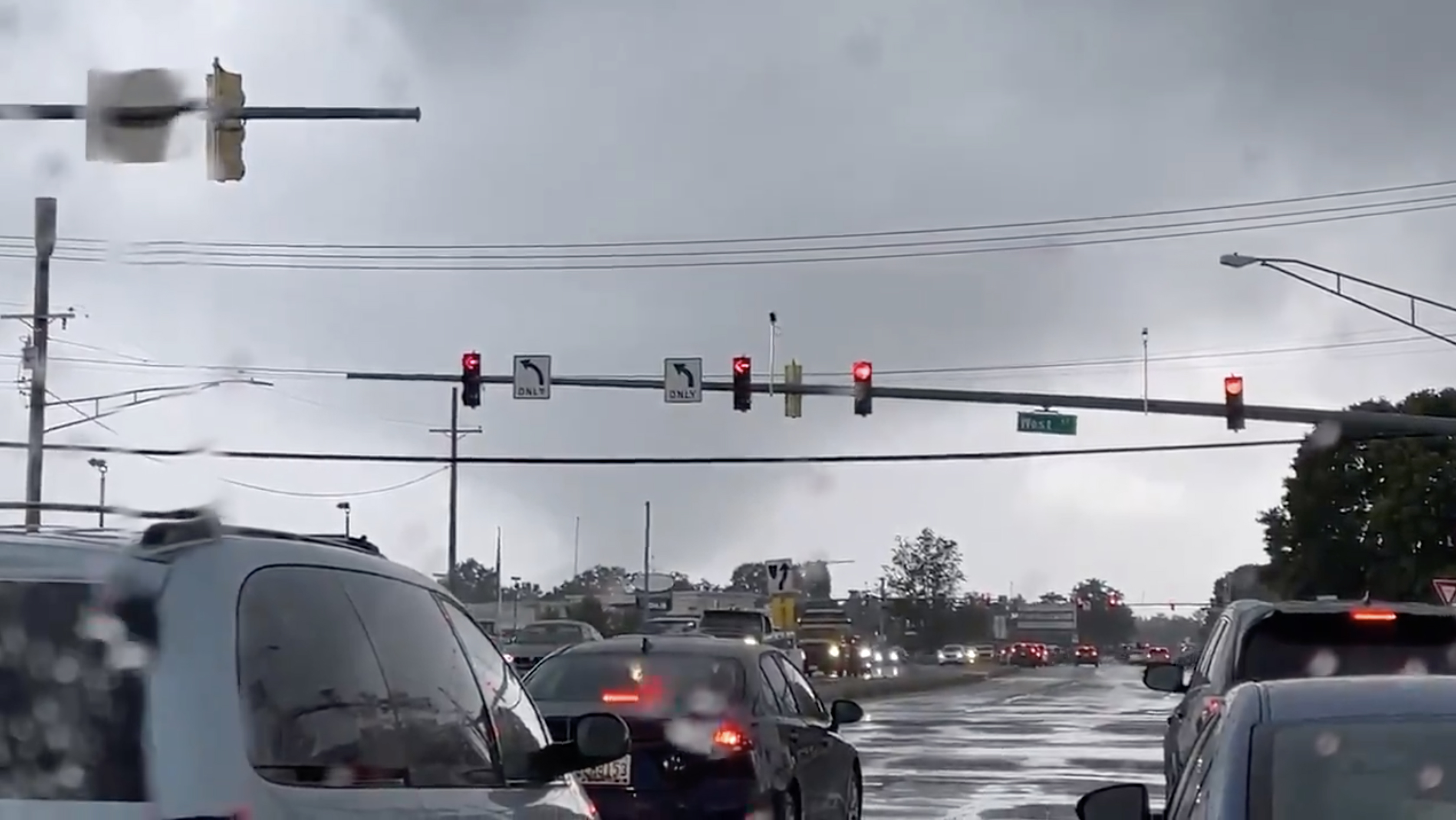 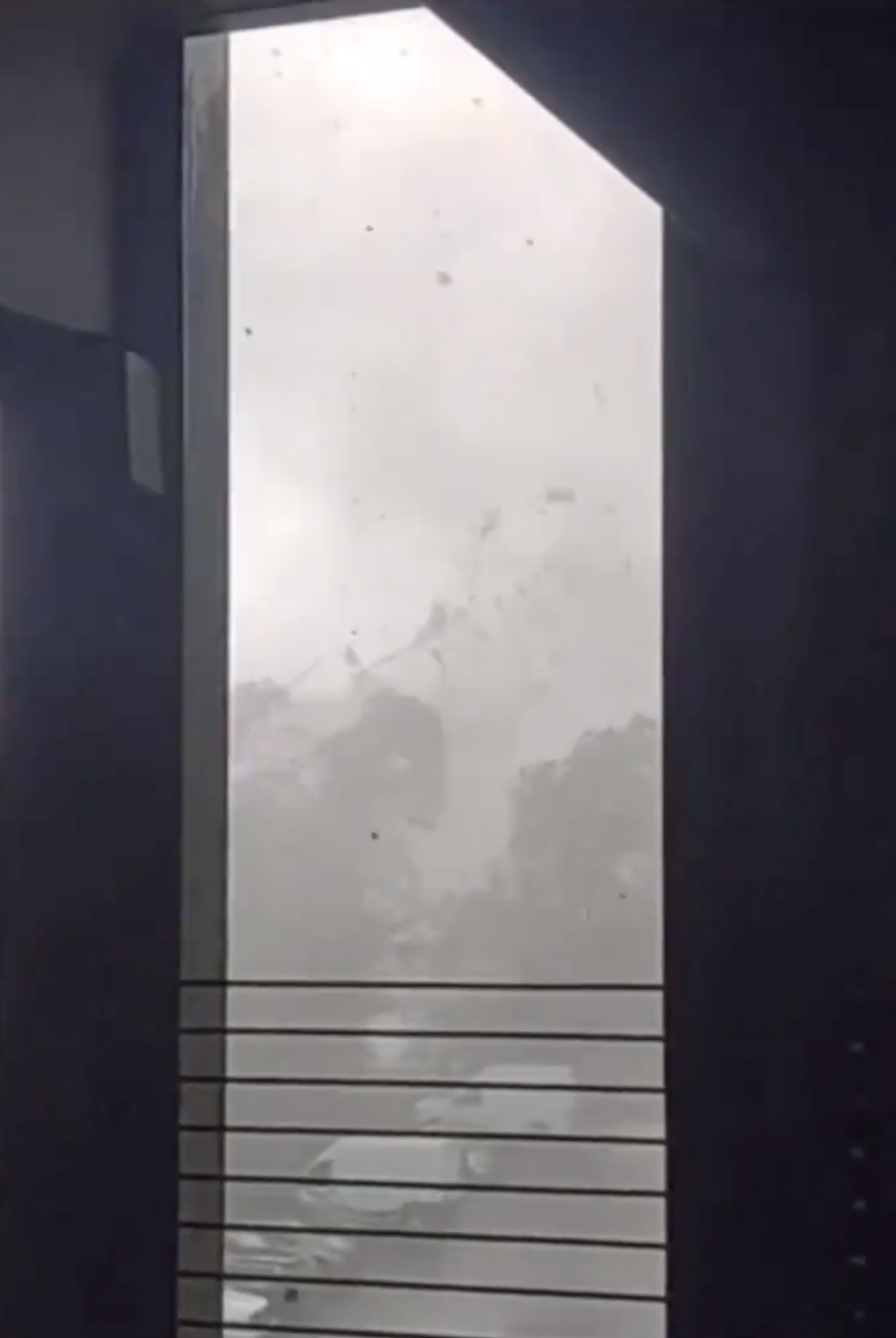 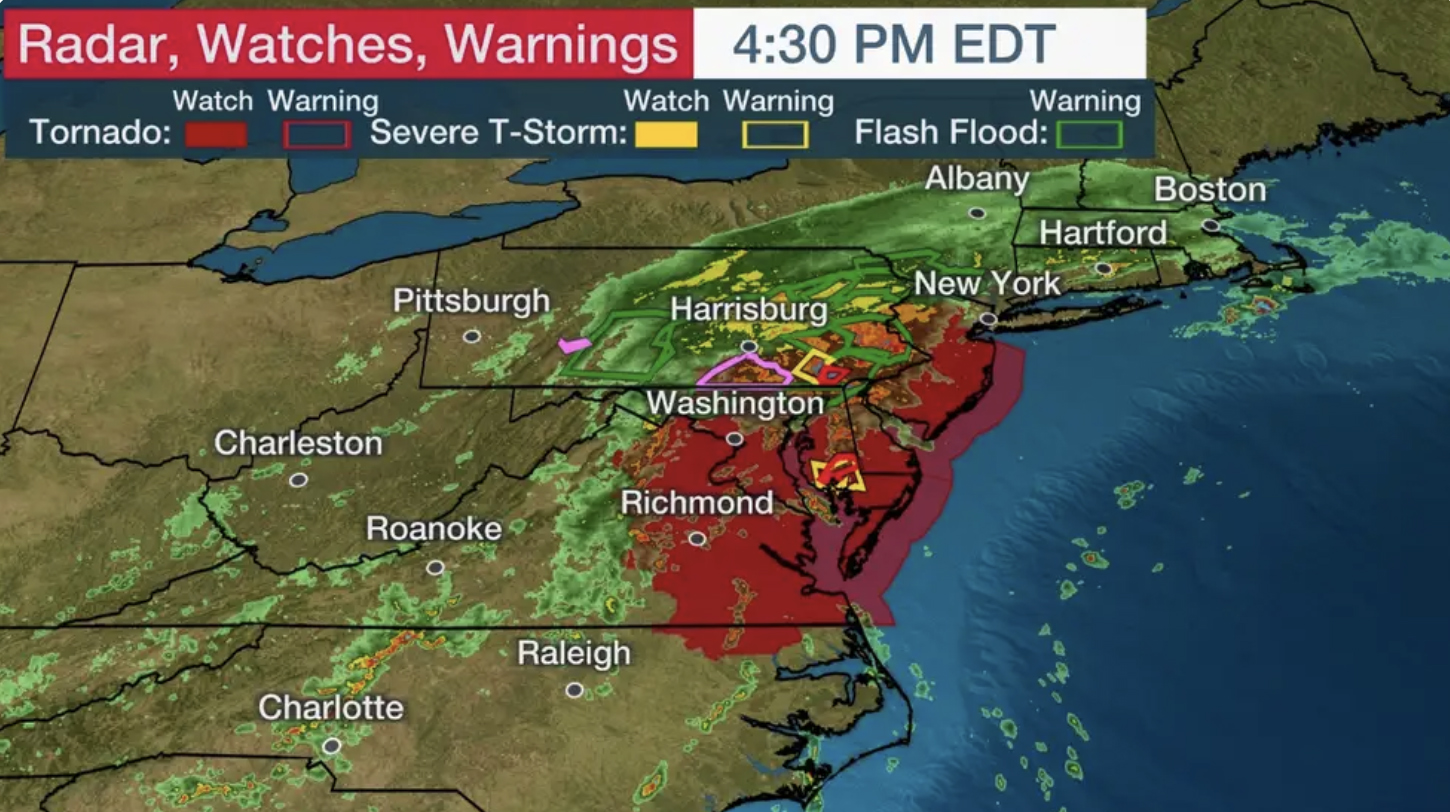 National Weather Service New York previously announced at 6.18pm on Wednesday that a tornado watch had been issued for parts of Connecticut, New Jersey and New York until 1am ET.

A few tornados are possible, as well as isolated wind gusts of up to 75mph, the NWS warned on Twitter.

The remnants of Hurricane Ida led to the evacuations of thousands of people on Wednesday after dangerous water levels were recorded at a dam near Johnstown, Pennsylvania.

It also prompted dozens of matches to be postponed at the U.S. Open on Wednesday.

"Play suspended between Diego Schwartzman and Kevin Anderson at Louis Armstrong Stadium–which has a roof–because of wind and rain," Sports Columnist Helene Elliott tweeted at 9.33pm. "It's nasty out there. And in there, too, apparently. Stay safe!"

The crazy weather comes just hours after a twister hit Maryland as the tail end of Hurricane Ida lashed out on the US — and the death toll hit eight.

According to CBS Baltimore, a tornado was confirmed at approximately 2.30pm.

Anne Arundel County Executive Steuart Pittman told WJZ that two tornados hit the state, one in Parole and another near Edgewater, CBS reported.

Pitmann said: "The wind and the power outages have been bad all along the Chesapeake coast so on the eastern side of our county.

"We have power outages, we have trees down and we have some roads closed. And our emergency operations center is activated."

Matthew Carpucci, a meteorologist for Fox5DC, shared footage of the tornado that took place in Annapolis, Maryland, on Wednesday afternoon.

In the video, which was posted on Twitter and since obtained more than 74,000 views, Carpucci is heard saying: "Tornado, right now! Tornado in Annapolis, Maryland."

He continued: "I'm only a few hundred feet away. This tornado sets across the road right in front of me. This is the tornado.

"You can see leaves in the air right now. People driving into it. They have no idea what the hell they are doing. This is the tornado."

He then proceeded to yell and try to get other drivers to stop driving into the tornado, but his efforts didn't seem to work.

Another shocking video of the tornado was uploaded to Twitter by Major League Baseball broadcaster Melanie Newman.

The video clip, which obtained more than 127,000 views by Wednesday evening, showed fierce winds, leaves flying in the air, rain, and trees swaying.

Newman said her boyfriend Andrew, a firefighter, and Coast Guard vet who doesn't use social media, took the video.

"We’ve got no power because lines are all down across the roads but we’re physically okay," she wrote in the comments. "Counting blessings with as many we’ve had this year."

A meteorologist, who goes by the name Doc V on Twitter, reshared the video and called the tornado "nuts."

"You don't see tornadoes this destructive on the east coast all that often," he added.

Maryland Gov Larry Hogan wrote to Twitter after the tornado passed: "We are closely monitoring the aftermath of the tornado that touched down from Edgewater to Annapolis.

The state is under a Flash Flood Watch until 8am Thursday.

Meanwhile, New Orleans was hit by looting chaos after Hurricane Ida and left the city facing three weeks without electricity.

And at least eight people have died as a result of Hurricane Ida, which made landfall over the weekend.

On Tuesday two power workers — Eli Nathaniel Babb and Layton River Ellison, both 19 — in Alabama were electrocuted while working to restore power, the DailyMail reported.

A 60-year-old man was the first to die on Monday, after a tree fell on him.

Another victim passed away in New Orleans after trying to drive his vehicle through flooded streets.

One man was eaten by an alligator in Louisiana, and his body has not been located.

And two people died tragically in Mississippi when a highway collapsed.

"Officials are also anticipating at least a month for power restoration and one year for public water repairs," she added. 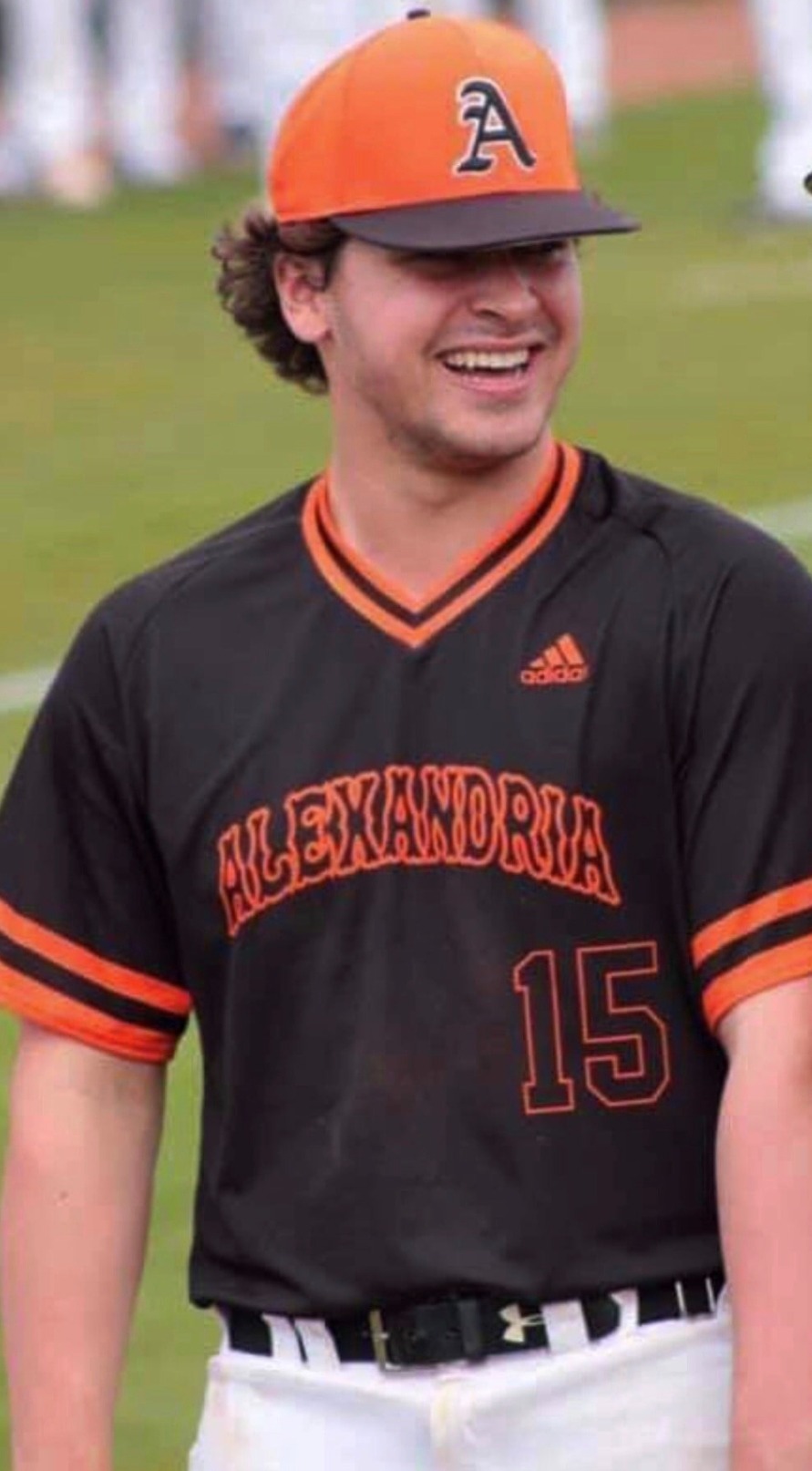 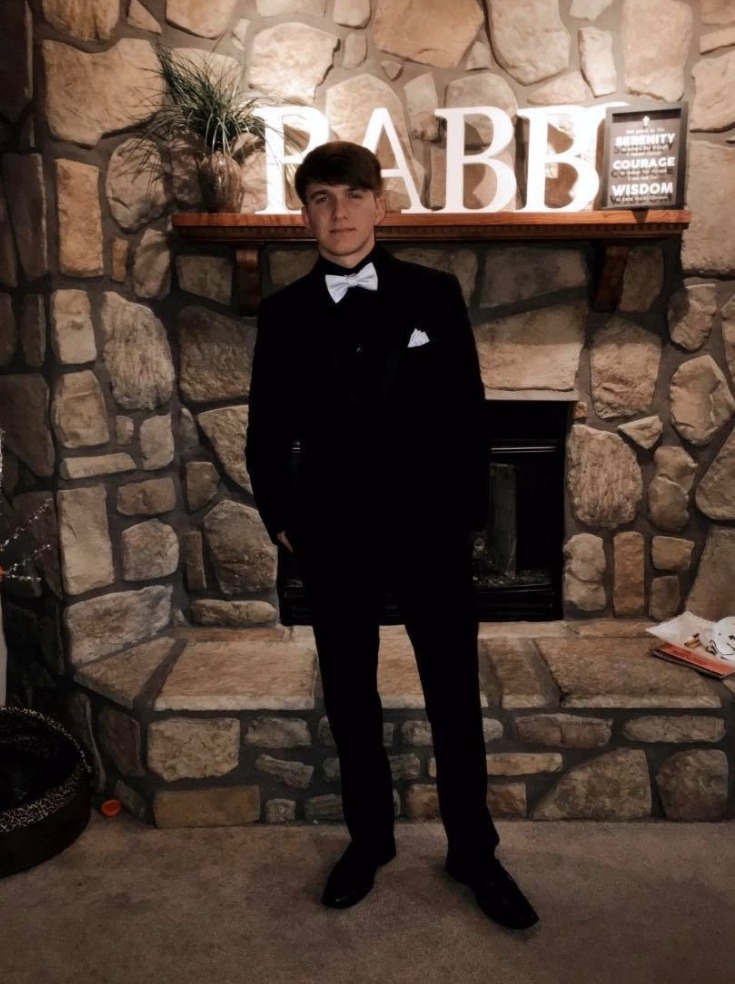