'I always try to tell the truth': Trump pushes back against falsehoods

Washington: President Donald Trump defended his proclivity to spread misleading statements and falsehoods, saying in a television interview on Wednesday that he tells the truth "when he can".

"Well, I try. I do try," he told ABC America. "And I always want to tell the truth. When I can, I tell the truth. And sometimes it turns out to be where something happens that's different or there's a change, but I always like to be truthful."

The Washington Post's Fact Checker reported last month that Trump had made more than 5,000 false or misleading claims in the first 601 days of his presidency – an average of 8.3 claims a day – and that the pace is picking up.

Since then, as Trump has ratcheted up his rhetoric in advance of the midterm elections, he has continued to mislead voters and invent facts.

He, for instance, said a middle-class tax cut would be passed by November 1, even though Congress wasn't in session and would not reconvene before the elections on November 6. 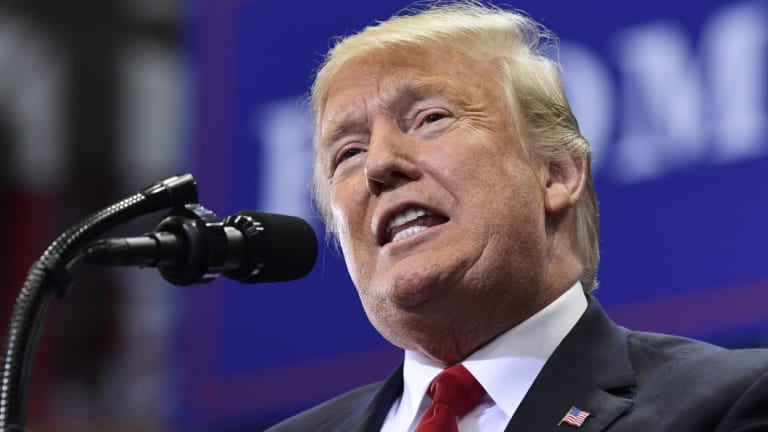 Donald Trump said he tries to tell the truth when he can.Credit:AP

He has repeatedly asserted that Republicans are more committed than Democrats to protecting people with preexisting health conditions, despite numerous past actions contrary to that claim.

And he has asserted that the United States is the only country to grant automatic citizenship to children born on its territory, despite the fact that more than 30 other nations have a similar "birthright citizenship" policies.

In the interview with ABC's chief White House correspondent, Jonathan Karl, Trump also took issue with the media's estimates of the sizes of caravans of Central American migrants slowly making their way toward the United States.

"You have caravans coming up that look a lot larger than it's reported, actually," Trump said. "I'm pretty good at estimating crowd size. And I'll tell you, they look a lot bigger than people would think."

Trump has often overstated the size of crowds he draws, starting with the first day of his presidency. At Trump's direction, his then-press secretary Sean Spicer falsely claimed that the crowd at his 2017 inauguration was "the largest audience to ever witness an inauguration, period, both in person and around the globe".