If ‘all things must pass’, when will COVID-19 subside, ask Liverpudlians

Liverpool: The Cavern Club, a basement bar in central Liverpool where The Beatles found their fame, should be packed this weekend. Friday would have been John Lennon's 80th birthday, and the faithful planned to remember Liverpool's lost son.

The doors, though, are shut. A rapidly worsening second wave has taken hold in England's north, testing hospital capacity and triggering mass confusion over how the government will respond. The crisis is also ravaging Liverpool's world-famous live music scene, and not even its best-known venue is immune from the damage. 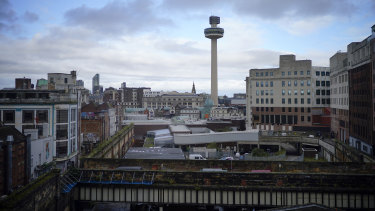 Liverpool is seeing a surge in cases of coronavirus, prompting worries and frustration from residents.Credit:Getty

"The locals are frightened to go out and other people in Britain have stopped travelling here, especially over the past two weeks. And of course there are no planes coming in from our major international markets.

"Everybody is just trying their best. We will get through it. George Harrison once said 'all things must pass', and it will, but it's looking like this problem is here for a bit longer than we hoped."

Cases have surged in Liverpool over the past month at a pace far greater than almost anywhere else in the United Kingdom. 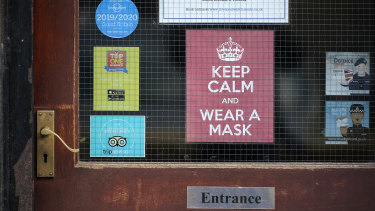 A ‘Keep Calm And Wear A Face Mask’ sign adorns a door in central Liverpool.Credit:Getty

However, the tightening will still cause the demise of some businesses struggling to recover from the first wave.

The Cavern Club lost £30,000 ($54,000) a week during the first lockdown – totalling £750,000 – but has enough to survive until next April under a new series of restrictions. The business – which counts Lennon's sister Julia Baird as one of its directors – only reopened in late August before having to close again in early October.

"Ever since I left university at 21, I've been a decision maker," Heckle said. "You get all the information in front of you and you make a decision."

"The frustrating thing this year has been making decisions without all the information.

"It's guesswork and that is very stressful, especially when you have 120 staff and you know their families and a lot of them have been with you for over 25 years."

Chief medical officer Chris Whitty handed MPs a document late this week which claimed pubs, bars and restaurants accounted for 30 per cent of common cases. However the data is unpublished "early analysis" and has been met by scepticism by some experts who think household-to-household mixing is a key driver.

Ahead of Monday's announcement, Chancellor Rishi Sunak has promised staff who work for businesses forced to close under tougher restrictions will get 66 per cent of their usual salary paid for by the government. The scheme will last for six months.

"I'm not blaming anybody because that's just the nature of what this pandemic is," Heckle said of the government. "It's constantly shifting sands." 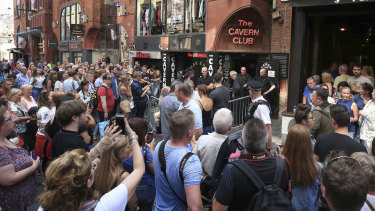 Fans queue outside the Cavern Club before an one-off gig by Sir Paul McCartney in 2018.Credit:PA

Others in the north are less forgiving. Mayors have criticised Downing Street for briefing national and London-based newspapers about the new restrictions days before they are even announced.

Maria Eagle, a Labour MP for Liverpool, said she was "bloody furious" that local regional leaders had not been consulted.

"But there is a lot of worry. There are a lot of people who can't see their elderly relatives and there's a lot of worry about impending job losses. The existing furlough scheme ends in three weeks and I have 15,000 workers in my constituency. Employment on my patch has already doubled to 8 per cent. 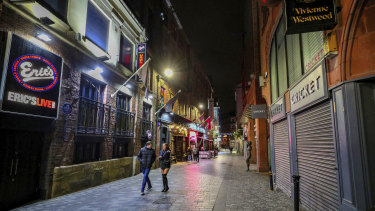 "Hospitality and the visitor economy is hugely important in Liverpool. It was, until the virus, one of the booming sectors of the economy. In the city region we've got over 57,000 jobs in that industry and they're all at risk now."

Elsewhere, Europe surpassed 100,000 daily reported COVID-19 cases for the first time this week, after countries including France, Russia and the UK saw no respite from the mounting number of infections.

The French health ministry reported 20,330 new infections on Friday, taking the cumulative total to 691,977 since the start of the year. In the past two days the ministry had reported more than 18,000 daily new confirmed cases.

England's Office for National Statistics said an estimated 224,400 people had COVID-19 in the week ending October 1, or 1 in 240 people, a 92 per cent increase in infections compared to the previous week.

Jeremy Farrar, a member of the government's powerful Scientific Advisory Group for Emergencies, compared the current situation to the grave circumstances Britain faced earlier this year. Experts widely believe one of the causes of the UK’s high death toll was because the government was too slow to implement a lockdown.

The longer decisions are delayed the harder and more draconian the interventions will be needed to bring down the trajectory of the epidemic curve, he warned.

"The tragedy is how predictable this has been since at least early July," Farrar said.

"It was not inevitable. It is not inevitable now that this worsens but to avoid spiralling out of control there needs to be action now. We are back to choices faced in the early March."