Ilkley, West Yorkshire has been named the best place to live in the UK

Stunning views, cosy pubs and great schools: Why Ilkley in West Yorkshire has been named the best place to live in the UK

Ilkley in west Yorkshire has topped a list of 70 locations to be named the UK’s best place to live by the Sunday Times.

The town was praised for its top schools, interesting shops, spectacular scenery and convenient rail links.

Judges were also impressed by its sports clubs and opportunities for young people, and by the energetic community spirit.

The guide also includes a list of regional winners.

The Isle of Bute was identified as the best place to live in Scotland while Llandeilo, Carmarthenshire, was placed top in Wales. 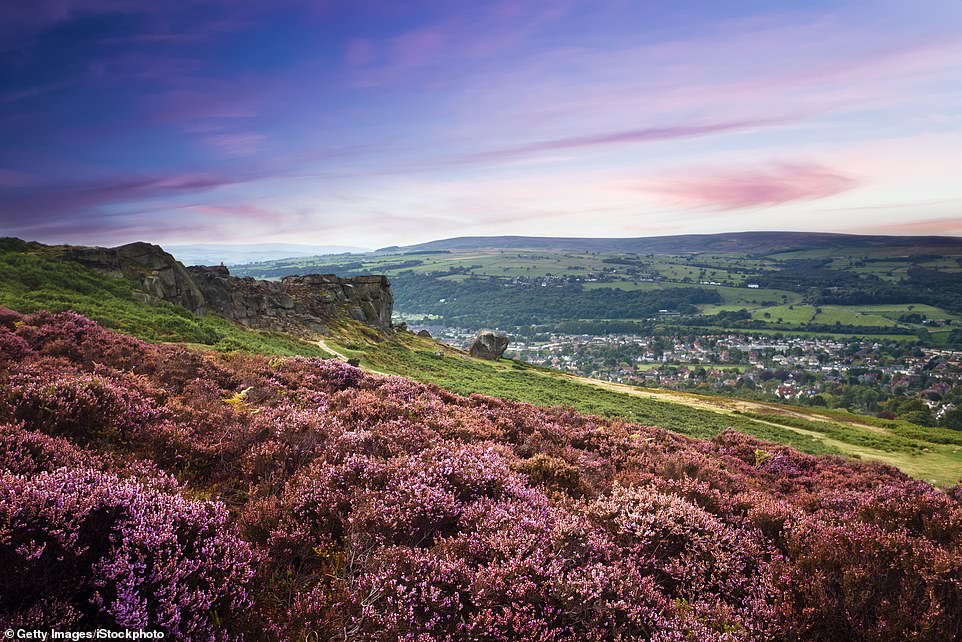 The comprehensive guide is released online on Friday and an edited version will be available in the paper on Sunday.

The Sunday Times’s expert judges assessed a wide range of factors, from schools, transport and broadband to culture, green spaces and the health of the high street.

‘Leave it just to statistics and you will never capture the spirit of a place. For that, you need to visit to take into account that ‘you have to be here’ feeling.

‘Is the pub dog-friendly, for example? Can you live car-free? What are the schools and houses like? Is it multicultural and multigenerational, and can it offer a good way of life to lots of different sorts of people?’

She added: ‘We hope there is something to suit everyone.’

The Sunday Times Best Places to Live 2022 regional winners are:

Norwich is a medley of the traditional and the modern, with a Norman castle, a cathedral and medieval cobbled streets co-existing alongside modern architecture, like the glistening Sainsbury Centre for Visual Arts (famously used as the Avengers HQ in the Marvel series).

Norwich (pictured) is a medley of the traditional and the modern – and the city prides itself on welcoming refugees, going all the way back to 1565 when Protestants from the Low Countries fled to Norwich to flee religious persecution

The city prides itself on welcoming asylum seekers, having distinguished itself all the way back in 1565 when Protestant refugees from the Spanish-controlled Netherlands were invited to take refuge from religious persecution.

The refugees brought their weaving skills, as well as the canaries which have since become the football team’s mascot.

Trainlines connect the south London area to London Bridge and London Victoria, whisking commuters to either of the stations in under 30 minutes. 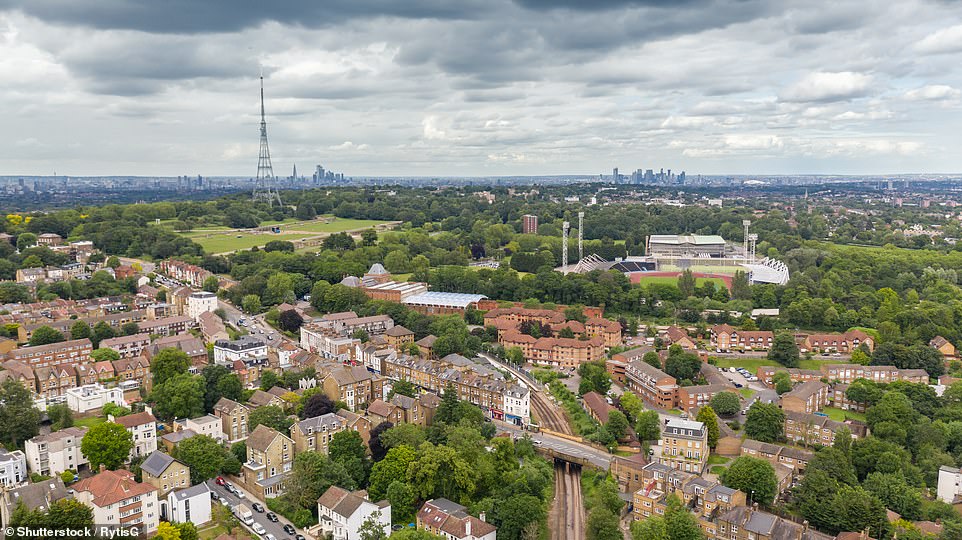 Three streets make up the ‘Westow Triangle’, playing host to a diversity of local businesses, like fishmongers, booksellers, a cinema and much more.

Meanwhile, a crowdfunding campaign promises to bring back the ‘rusty laptop’ – a Corten steel stage at the Crystal Palace Bowel which once welcomed such musicians of international repute as Bob Marley and Pink Floyd.

And a Victorian-era tunnel that once took visitors to the original Crystal Palace has received a £3.2million grant to be restored – promising to remind the area of its 19th century roots.

With cobbled alleys, honey-coloured houses, a thatched cricket pavilion and an old market square, Uppingham is a town that bursts at the brim with quaintness and beauty. 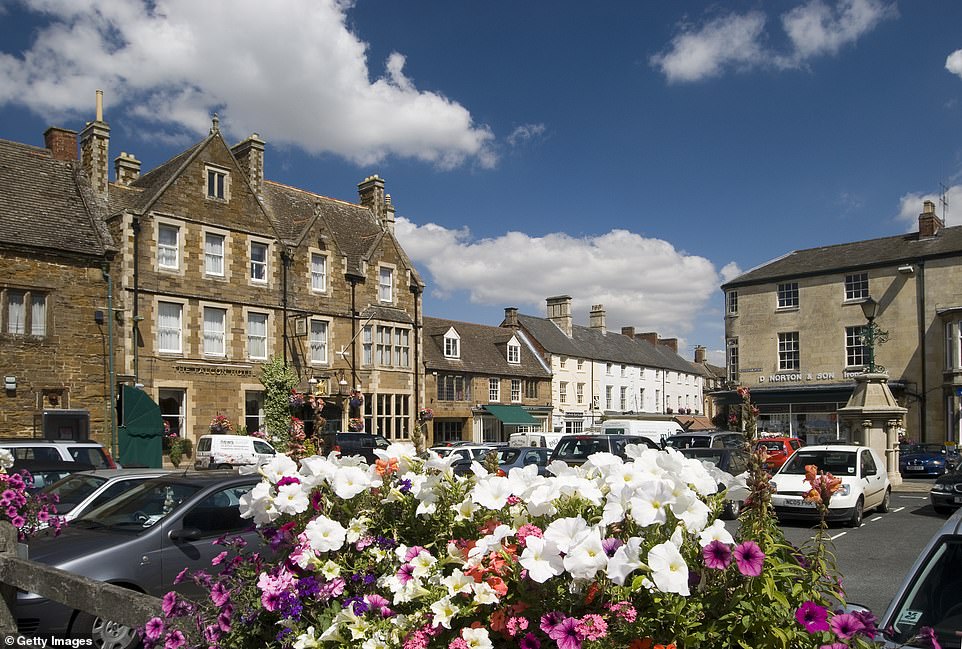 Uppingham (pictured) is known for its annual cattle-and-sheep festival, as well as a majestic Hogwarts-esque private school that looms over the town

In November, the streets fill with sheep and cows for the long-standing fatstock show, with temporary pens in the market square hemming the ruminants in as locals file past on their way to the pubs and shops.

A private school founded in 1584 stands over the town with all the majesty and pomp of a real-world Hogwarts.

With reasonable house prices and big-city trainline links, this old mill village has attracted more than its fair share of work-from-home relocators since Covid hit.

Attracted by the sprawling Pennine countryside and the town’s entrepreneurial get-up-and-go vibe, many have set up shop in Slaithwaite in recent years. 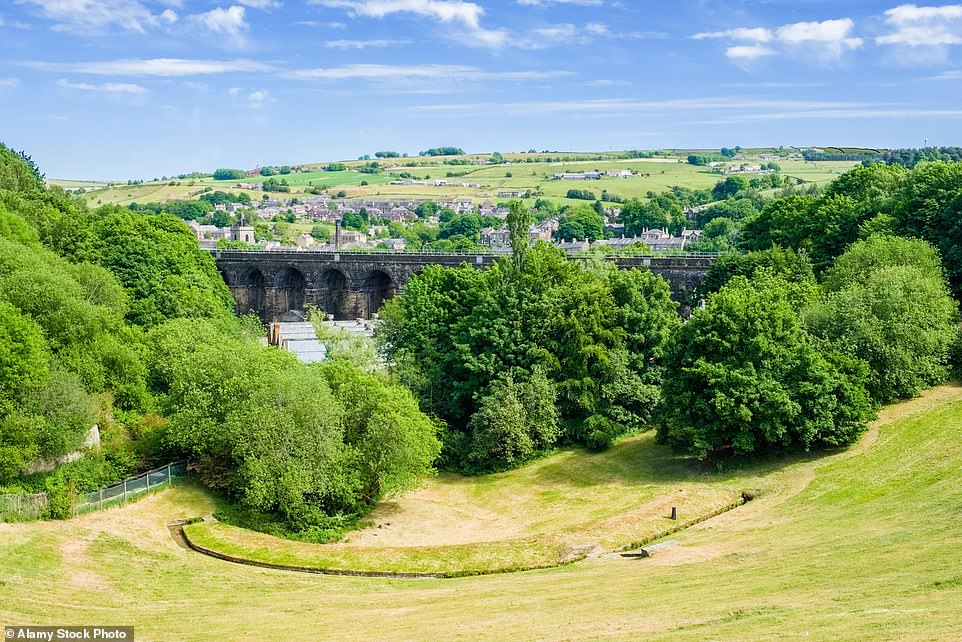 Slaithwaite (pictured) is an old mill village with an entrepreneurial edge, where people enjoy sipping coffee in canalside cafes

Sourdough bakers, smoothie shops and even a high-end dog treat manufacturer have started operating out of abandoned warehouses and mills.

The canalside town is an arty place, with a community pottery, an arts and drama studio and even a 130-year-old brass band.

A traditional fishing village with Game of Thrones locations, Ballycastle invites TV fantasy fans from around the world to enjoy a fresh fish supper in one of its many harbourside restaurants overlooking the Atlantic. 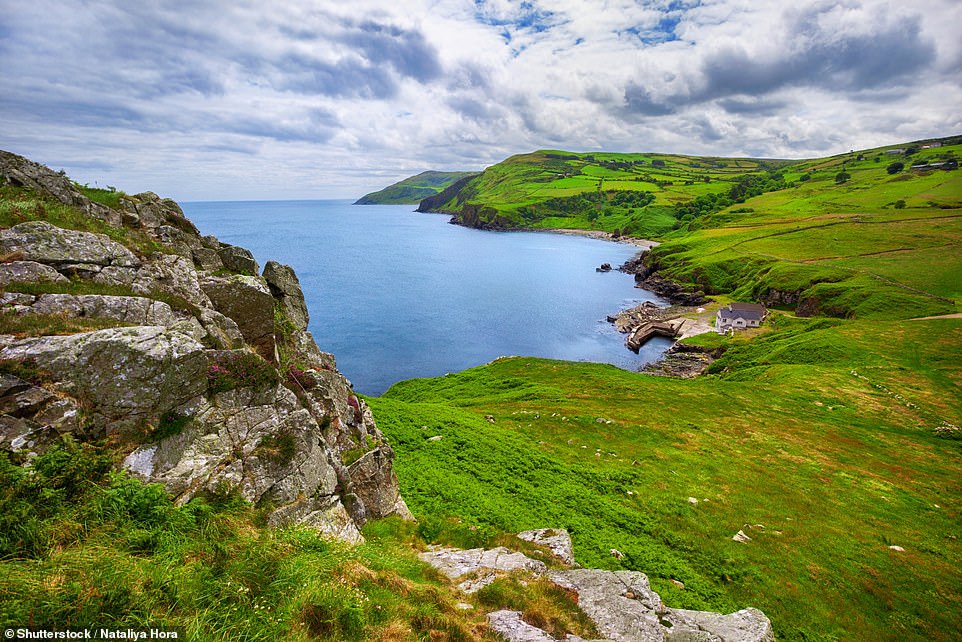 Ballycastle (pictured) draws visitors keen for a round of golf on its seaside course, as well as TV fanatics looking to see Game of Thrones locations

Parents find the place exceptionally child-friendly, with a mile-long sand and shingle beach panoramic forest walks and a myriad of sports clubs – from camogie to tennis.

A coastal golf course – offering free membership for under-14s – is so popular with visitors that at the peak of summer when the sea is sparkling non-members face costs as steep as £240 for an 18-hole game.

Trawden is home to a tight-knit community of crowdfunders whose answer to most problems is to have a whip-round.

In 2021, the last pub in the village was about to close its doors for the last time, when locals raised a spectacular £520,000 through a shares issuance – bringing the boozer under collective ownership. 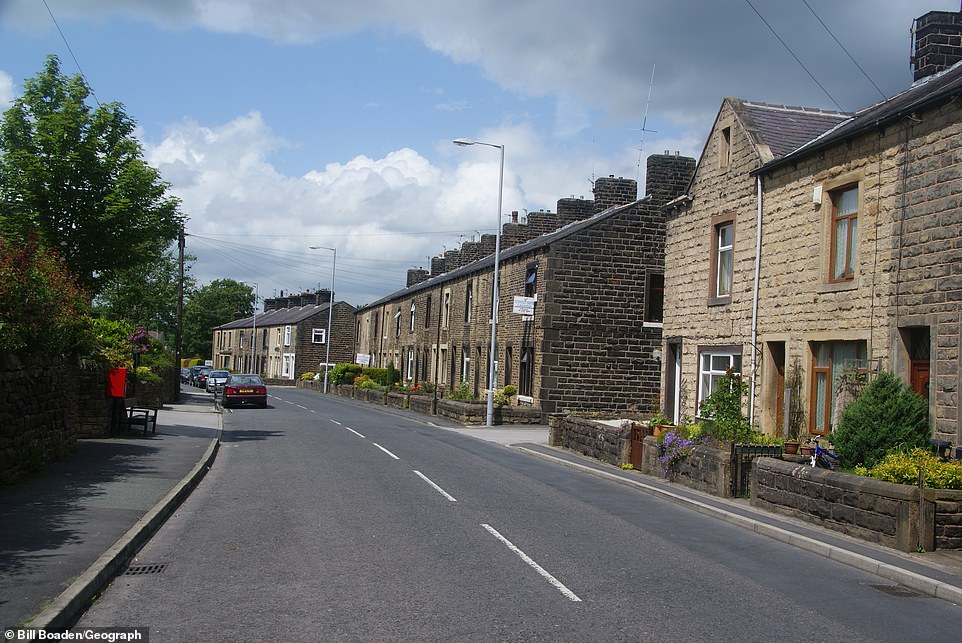 Trawden (pictured) has a tightly knit community who are not afraid to put their money where their mouth is – having clubbed together to take collective ownership of a pub, a community centre and a library in recent years

Similar public takeovers of ailing assets had occurred previously – of the community centre in 2014 and the library in 2018.

Jokingly referred to as ‘the people’s republic of Trawden’ by The Times, the village has benefited from its model of shared ownership, with immaculate and well-used public spaces regularly hosting quizzes, Pilares classes, mother-and-baby groups and much more.

Trawden in Bloom volunteers prune the trees and shrubs, keeping the vegetation presentable throughout the wild growth periods of the spring and summer.

Sprawling countryside injects a rugged, rural way of life into the community – exemplified by the scarecrow trail and annual agricultural show.

At only 90 minutes from central Glasgow, the island is comparably commutable – giving it a leg-up on the Scottish islands of Islay and Skye.

Bute is only the fifth most populous of the Scottish islands, allowing city-dwellers a much-needed escape from the hustle and bustle of places like Edinburgh or Glasgow. 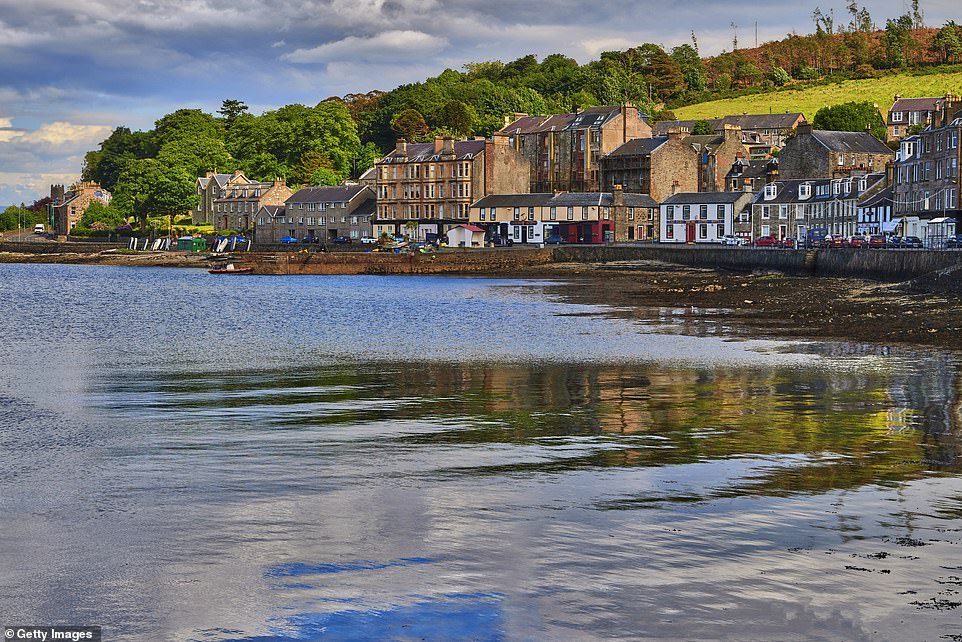 The Isle of Bute (pictured) is the fifth most populous Scottish island, although in Victorian times its main town of Rothesay was a much-frequented pleasure resort

A ferry drops visitors off at the palm tree-lined promenade, and leaves them to climb up the steep West Island Way to Rothesay, the island’s main town.

In the Victorian era, Rothesay was a much-famed pleasure resort, and the afterglow of that era still shines dully in the high street.

Sevenoaks has been a reliable mainstay of the Sunday Times’ list of best places to live in the UK in previous editions – owing in large part to the area’s high-ranking schools, greenery and easy access to London Bridge (which takes only 22 minutes by train). 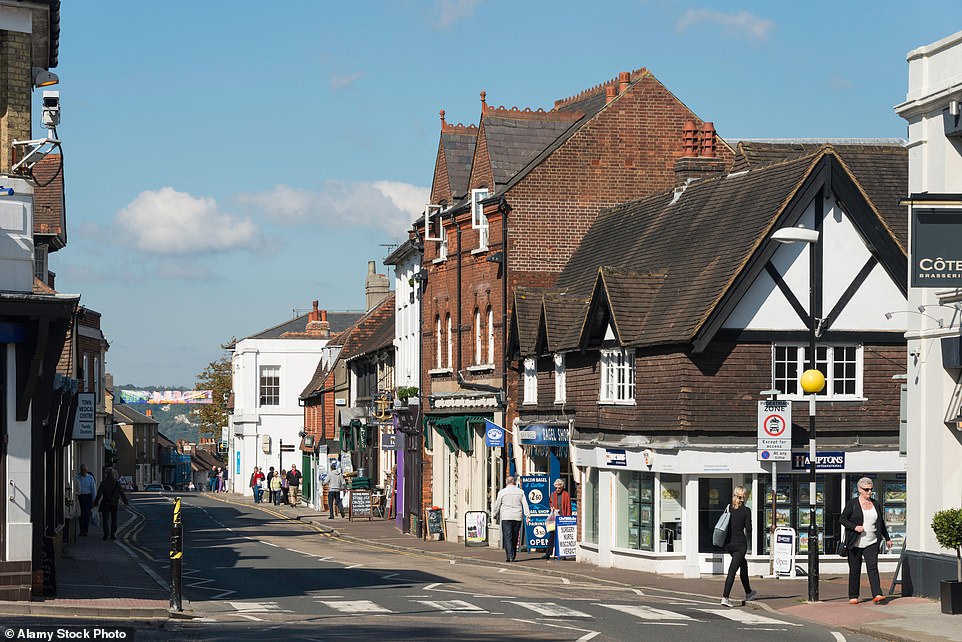 Sevenoaks (pictured) has been a mainstay of the Sunday Times’ list of best places to live in the UK in previous years, benefiting from its close links with London Bridge, greenery and excellent schools

Surrounded by the Kent Downs Area of Outstanding Natural Beauty, Sevenoaks is a bastion of well-worn civilisation amid a rug of untamed wildness.

In 2020, Sevenoaks was the top destination for Londoners to relocate to, according to Hamptons estate agency.

With the influx of Londoners has come the proliferation of some well-known chains, like Starbucks or Gail’s Bakery.

At its heart, however, Sevenoaks is not a high-octane or sexy city, its high street mostly filled with the bog-standard amenities most used by older people, like opticians or charity shops.