As the public looked on, officers hauled out boxes of objects relating to June 4, 1989, when the Chinese military killed thousands of peaceful students. 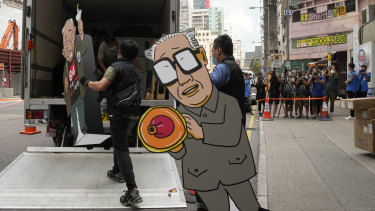 Police officers take away the cutout of the late former Chinese Premier Zhao Ziyang from the June 4th Museum in Hong Kong. Credit:AP

A map locating the deaths, along with a cardboard cutout of Chairman Mao, were among the items bundled into a removal van outside.

China has long sought to erase memories of Tiananmen Square, though Hong Kong was the one part of the country where people were allowed to discuss it. The city held mass candlelit vigils for the victims every year.

Before the raid, police arrested members of the pro-democracy group that organises the annual Tiananmen vigils and founded the museum.

Police accused the Hong Kong Alliance of foreign collusion and demanded it hand over financial and operational information, alleging it had breached a national security law. 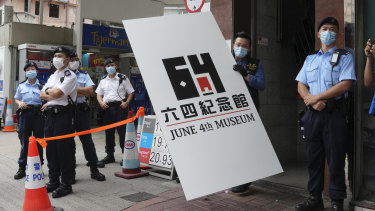 The alliance refused, calling the demands an “abuse of power”.

Dominic Raab, Britain’s Foreign Secretary, called the arrests “another chilling demonstration of how the National Security Law is being used by Beijing to dismantle civil society and stifle political dissent in Hong Kong”.

Antony Blinken, US Secretary of State, said the arrests were “politically motivated and constitute a blatant abuse of law by those in power”.

Alliance leaders Albert Ho and Lee Cheuk-yan have already been jailed for pro-democracy protests that rocked Hong Kong in 2019. The Tiananmen museum has had to close and relocate several times. In June, organisers finally shut its most recent location to “ensure the safety of staff and visitors”. 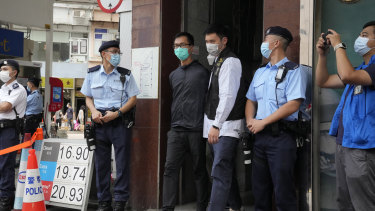 Simon Leung Kam-wai, fourth from right, a committee member of the Hong Kong Alliance in Support of Patriotic Democratic Movements of China, is escorted by police during an investigation of the June 4th Museum in Hong Kong. Credit:AP

The alliance moved the museum online in August after a HK$8,000 (£750) fine for operating without a licence. The museum once showed archival footage and sound from the night of the massacre, as well as testimonies from survivors.

There was also information about those killed and subsequent attempts to keep the memory of the crackdown alive, including large pictures of the annual vigil in Hong Kong.