Washington: "I can't imagine that anybody could be doing more." — Anthony Fauci, director of the National Institute of Allergy and Infectious Diseases

Anthony Fauci, the top US infectious disease expert, says he was taken out of context in a new campaign advertisement that touts President Donald Trump's handling of the coronavirus pandemic. 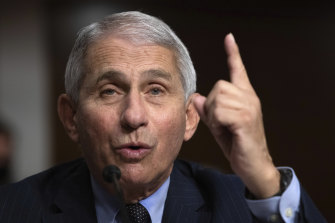 Dr Anthony Fauci, director of the National Institute of Allergy and Infectious Diseases during a Senate hearing last month.Credit:AP

The ad highlights the President's recent bout with COVID-19. The deaths of more than 200,000 Americans from the disease have been a huge setback to the president's election campaign. This ad tries to argue that he took forceful action, despite his constant efforts to play down the pandemic in public.

After the ad asserts, "President Trump tackled the virus head on as leaders should," it follows with a clip of Fauci appearing to endorse that claim: "I can't imagine that anybody could be doing more."

There a certain irony in using Fauci as a validation: Trump frequently is quite critical of Fauci. But the biggest problem is that Fauci is not talking about Trump at all. In a clip from a March interview, Fauci is discussing the workload of the coronavirus task force.

"The comments attributed to me without my permission in the GOP campaign ad were taken out of context from a broad statement I made months ago about the efforts of federal public health officials," Fauci in a statement provided to CNN when asked if he agreed to be featured in the ad. 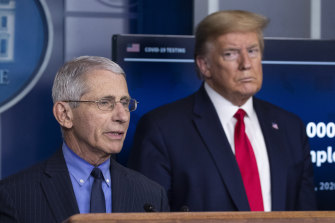 Fauci told CNN, "In my nearly five decades of public service, I have never publicly endorsed any political candidate."

Here's the full context for his quote.

"I have been devoting almost full-time on this – almost full-time. I'm down at the White House virtually every day with the task force. I'm connected by phone throughout the day and into the night and when I say night, I'm talking 12, 1, 2 in the morning. I'm not the only one. There's a whole group of us that are doing that. It's every single day. So I can't imagine that that under any circumstances that anybody could be doing more. I mean, obviously, we're fighting a formidable enemy – this virus. This virus is a serious issue here."

The section used in the ad is "I can't imagine that . . . anybody could be doing more."

In other words, the ad misleadingly clips Fauci's comment and takes it out of context, especially because it sets it up with voiceover narration designed to make viewers believe the popular Fauci is praising Trump.

According to The Washington Post's Guide to Manipulated Video, this is an example of "missing context – isolation." That's when a brief clip creates a false narrative that does not reflect the event as it occurred. The little snip in the middle of Fauci's comment indicates that the Trump campaign clearly wanted viewers to believe Fauci was talking about Trump.

But he was not.

CNN reported that the 30-second spot is airing in Michigan. The Trump campaign didn't respond to a request for comment by the network.