Indian-Australians who were barred from boarding a repatriation flight from Delhi have been told to leave their quarantine hotel and say they have been “left in limbo” after returning positive COVID tests.

About 80 people were able to board the first flight since the government lifted its flight ban on India, almost half of the 150 people who were offered a spot. 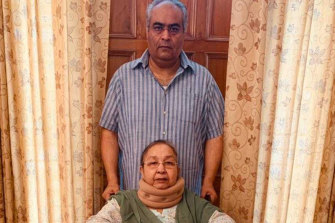 Australian citizen Sunny Jour and his 72-year-old mother Darshan Kaur Jour, who has multiple illnesses, were barred from the repatriation flight.

Australian citizen Sunny Joura and his 72-year-old mother Darshan Kaur, an Australian permanent resident, were banned from boarding the flight after Mr Joura returned a positive test with a low viral load.

Mr Joura has been trying to return to Melbourne since June last year after travelling to care for his dying father last May. He has not seen his wife or children in more than a year.

As per the Australian government’s requirements for the flight, Mr Joura and his mother entered hotel quarantine in Delhi last Tuesday and were given a COVID test on Thursday.

On Friday afternoon, Mr Joura was informed he was positive but his mother was negative, despite staying in the same room.

Mr Joura, who is in a group chat with at least 40 others who tested positive, said some people barred from the flight had tested negative before entering the hotel, while others had returned weak positive results.

“We suspect it has either spread in the airconditioning in the hotel or it’s a false positive or there’s something wrong in the testing,” he said.

“We were not offered any retest, which I thought should have been done because some of us are vaccinated as well – my mother and I are both vaccinated – so sometimes we will get a false positive because of vaccinations.”

All positive cases, including Mr Joura and his mother, were told to leave the hotel by 2pm on Friday and were sent home to isolate for 14 days before they could reapply for another repatriation flight.

Mr Joura’s home is 45 minutes away in Delhi, but Brisbane woman Neha Sandhu, who organised an online support group for people refused a spot on the flight, said others had travelled from hundreds of kilometres away and were now unable to go home.

“Some had travelled interstate and there are restrictions in those states about travelling,” she said.

“These are already vulnerable people, to leave them behind is not a good idea. They’ve been left in limbo.”

Mr Joura said he was worried about the prospect of having to do hotel quarantine again once he and his mother were allowed to travel.

“It was a bad idea for getting everyone into this hotel 72 hours prior to the flight in a hotbed area like Delhi where the viral load is so high and knowing full well that there can be issues with hotels in terms of airconditioning,” he said.

“The whole point of taking us to Howard Springs is that there’s no airconditioning there and it’s considered the gold standard.”

Mr Joura, who is now isolating in a separate room to his frail mother, said he was not showing any symptoms yet, but was worried if he deteriorated over the coming days and weeks.

“If it does get worse, there is no healthcare here. There’s no hospital beds, there’s no oxygen supply either. Even influential people don’t get the treatment. I’ve heard a lot of people that I know have died because of lack of healthcare and, in some cases, lack of oxygen,” he said.

Mr Joura said even if his mother remained COVID-negative, she was still extremely vulnerable and it was “next to impossible” for her to see a doctor for her existing conditions due to the overwhelmed healthcare system.

India recorded more than 316,000 cases on Thursday, taking the total to more than 23.7 million confirmed cases. The country has recorded almost 260,000 deaths, but numbers are widely believed to be much higher as the country’s health system struggles to cope with the deadly third wave.

Ms Sandhu said the government needed to provide practical arrangements for those left behind, especially for those who had to stay in Delhi, which is overrun with coronavirus.

“If something happens and someone gets serious with COVID symptoms – what will be the scenario then? They need to plan to have oxygen there,” she said. “There should always be a plan B for them.”

Ms Sandhu said many people who were booked for the next repatriation flight on May 22 needed to travel from the south of India and were spooked about what would happen if they tested positive in the Delhi hotel quarantine.

“Especially people with kids,” she said.

Treasurer Josh Frydenberg said on Saturday the high commission was working with stranded Australians to assist them, but did not say specifically what support was available.