Nicola Sturgeon’s plans for Scottish independence were dealt a savage blow today as a new study revealed leaving the UK would damage the nation’s economy more than Brexit – and rejoining the EU would make little difference.

The economic damage from leaving both unions would be the equivalent of an income loss of between £2,000 and £2,800 per person, according to an analysis of trade by the London School of Economics (LSE).

Academics from the LSE’s Centre for Economic Performance say the economic costs of independence are two or three times greater than Brexit due to the volume of Scotland’s trade with the rest of the UK.

The report concludes the losses from independence are similar regardless of whether an independent Scotland rejoins the EU or maintains a common market with the UK.

However, they said these were both likely to be underestimates as there could also be impacts on productivity.

The report comes amid efforts by Ms Sturgeon and the SNP to bounce Boris Johnson into agreeing a new independence referendum, seven years after Scotland voted to remain part of the UK.

Mr Johnson has consistently said that the 2014 vote was a’once in a generation’ event, as agreed by nationalist leaders at the time. 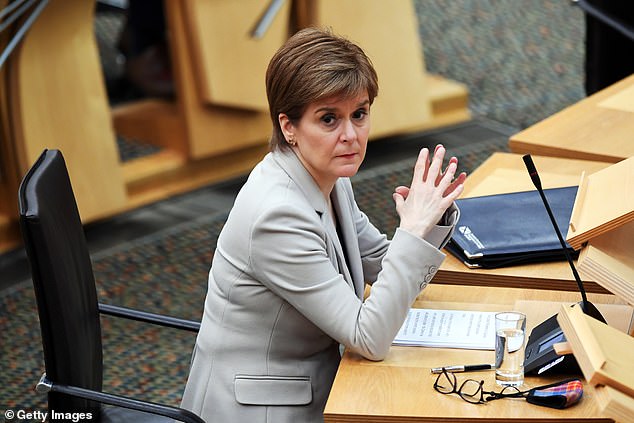 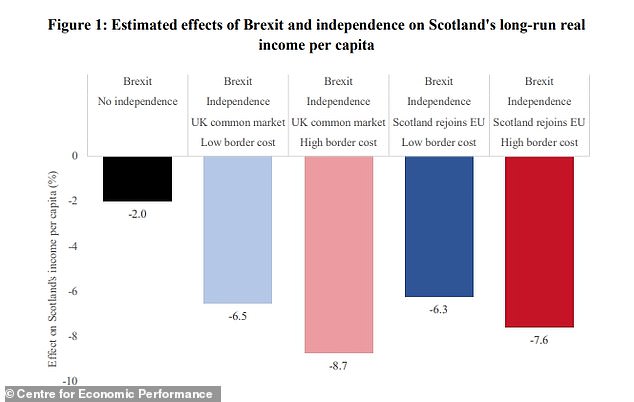 Donald Trump’s son Eric has hit out at plans for MSPs to debate whether his father’s business interests in Scotland should be investigated, saying such discussions could deter overseas investors.

Holyrood will vote today on a motion calling for an investigation into the former US president’s business interests during a debate led by the Scottish Greens.

The party wants to see the Trump Organisation’s golf courses investigated via an unexplained wealth order, though the Scottish Government says only the Lord Advocate can decide if such an order can be made.

Scottish Greens co-leader Patrick Harvie said there are ‘serious concerns’ about how the former US president financed the cash purchases of his Scottish golf courses.

The Scottish Greens will renew calls for an investigation into the purchase of estates at Turnberry and Menie during their opposition debate on February 3.

They say a legal opinion from Aidan O’Neill QC states that ministers, rather than the chief legal officer, are responsible for unexplained wealth orders.

Eric Trump, who is a trustee and executive vice-president of the Trump Organisation, said the debate could have consequences for how investors consider Scotland.

He said: ‘At a critical time when politicians should be focused on saving lives and reopening businesses in Scotland, they are focused on advancing their personal agendas.

‘As a company, the Trump Organisation has invested hundreds of millions of dollars into the Scottish economy, rescued Turnberry, a Scottish national treasure on the brink of collapse, and rebuilt it into one of the finest resorts anywhere in the world.

‘In both Aberdeen and Turnberry, the Trump Organisation has created thousands of jobs and has made an overwhelming contribution to the leisure and tourism industry.’

The LSE team did not consider other effects of independence such as changes in investment flows, fiscal arrangements or Scotland’s currency.

As the rest of the UK accounts for more than 60 per cent of Scotland’s imports and exports, they noted, the impact of any trade barriers would be far greater than those between Scotland and the EU.

The rest of the UK would be likely to remain Scotland’s largest trading partner for decades after independence, they said, meaning that rejoining the EU would only become attractive if independence damaged trade south of the border to a sufficient degree.

Their report said: ‘Adjustment to Scottish independence is likely to be even slower and may take a generation or more, as border costs gradually increase due to divergence between economic policy and regulations in the two countries and the erosion of existing cultural, social and business ties.

‘This slow adjustment means that in the initial decades after independence the rest of the UK will continue to be Scotland’s most important trade partner.

‘Consequently, even if in the long run there is an economic case for an independent Scotland to rejoin the EU, we conclude that Scotland’s medium-run priority following independence should be keeping border costs with the rest of the UK as low as possible.’

Prof Huang said: ‘This analysis shows that, at least from a trade perspective, independence would leave Scotland considerably poorer than staying in the United Kingdom.

‘While many considerations will play a role in shaping the outcome of a second referendum, voters need to know what the likely costs and benefits of each course will be.

‘This briefing contributes to that knowledge.’

Prof Sampson said: ‘We find that the costs of independence to the Scottish economy are likely to be two to three times greater than the costs of Brexit.

‘Moreover, rejoining the EU following independence would do little to mitigate these costs, and in the short run would probably lead to greater economic losses than maintaining a common economic market with the rest of the UK.’

The Scottish Government’s Economy Secretary Fiona Hyslop responded to the report, saying: ‘As an independent member of the EU, free from the damage of Brexit, Scotland would be part of the huge Single Market which is seven times the size of the UK.

‘There is no reason whatsoever that Scotland could not emulate the success of independent countries of our size which are far wealthier per head than the UK.

‘In the real world, through membership of the EU, independent Ireland has dramatically reduced its trade dependence on the UK, diversifying into Europe and in the process its national income per head has overtaken the UK’s.’

She continued: ‘The study is also clear that it takes no account of any changes in migration policy, inward investment or any economic levers the Scottish Government would have control of in an independent Scotland to do things better and boost the economy.

‘With our economic resources and advantages, control of economic policy and membership of the EU Scotland would be very well placed to grow the economy.

‘It is still too early to calculate the long-term damage that Brexit will do to Scotland’s economy, but the disruption it is already causing is deeply concerning.’