Officials have said they are using the internet jammers near schools to stop questions being leaked on WhatsApp as exam starts in the country.

The online blackouts will be imposed in certain areas, according to the West Bengal state government.

They will especially be imposed near exam centres. The blackout is being implemented to prevent more screenshots of exam papers surfacing on social media sites, according to The Times.

India’s equivalent of GCSEs are Board Secondary School Examinations and they start on Monday.

The exams are sat by around two million 15 and 16-year-old pupils every year.

Despite phones and electronic devices being banned, there have been cheating scandals in the past. 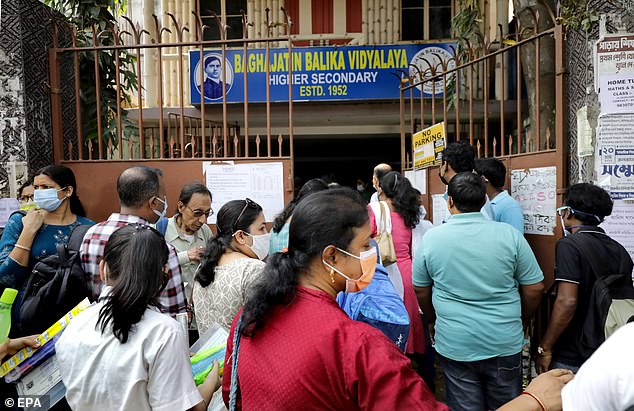 Online blackouts will be imposed in certain areas, according to the West Bengal state government. Pictured: Students go into an exam centre at a girls school in Kolkata, India, today

But before the coronavirus pandemic and two years in a row, papers were leaked in West Bengal and other states such as Rajasthan and Uttar Pradesh.

Fears grew that there were corrupt police officers and officials leaking the exam papers.

Investigations were done but definitive sources of the stolen papers have not yet been found.

This is because of the fast and covert ways they are spread around when leaked.

The country has also put other measures in place to stop students from cheating.

Students are not allowed to go to the toilet in the first hour and 15 minutes of an exam.

This is in case of cheat sheets being hidden in the toilets. Also, many exam centres will have CCTV.

Authorities also confirmed that they are putting specialist teams in place to stop students travelling to exams being delayed by elephants on the road.

At this time of year many elephants migrate to areas with more water.

Forestry Departments are deploying the teams to minimise disruption for students coming to school exams.

One West Bengal forest department official told The Calcutta Telegraph: ‘The challenge is that elephants sometimes stand on roads for a long time. In those cases a student may get late in reaching his or her exam centre. So, we have to keep a close watch on the roads in elephant zones.’