Indian politician is charged with raping a 16-year-old girl

A politician from Indian Prime Minister Narendra Modi’s party has been charged with raping a teenager whose plight was ignored by police until she tried to set herself alight.

The Central Bureau of Investigation charged Kuldeep Singh Sengar with the 2017 rape of a 16-year-old girl, whose father was later beaten in custody allegedly by Sengar’s brother and later died.

The sense of impunity enjoyed by Sengar, a powerful Bharatiya Janata Party (BJP) state lawmaker, and his brother sparked revulsion and protests across India demanding justice.

Sengar, who like his brother was not charged until the crime made national headlines, had smiled and bragged on television that he and his family would be proven innocent. 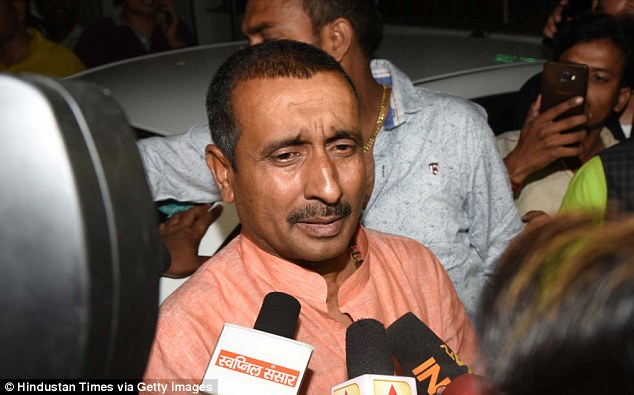 Kuldeep Singh Sengar (pictured) has been charged with the 2017 rape of a 16-year-old girl, whose father was later beaten in custody and later died

But CBI spokesman Abhishek Dayal told AFP that Sengar had been formally charged with rape, criminal conspiracy and child sex offences on Wednesday.

The victim accused Sengar of assaulting her in June 2017 at his home in Unnao district in Uttar Pradesh.

Police in the notoriously lawless state refused to take action when her family reported the rape.

Her father, who kept pursuing her case, was detained by police and severely beaten. He later died from his injuries.

In April, nearly a year after her assault, the girl tried to set herself on fire outside the home of Uttar Pradesh leader, and BJP stalwart, Yogi Adityanath.

The chief minister ordered an investigation into the crime and the case was handed over to federal investigators. 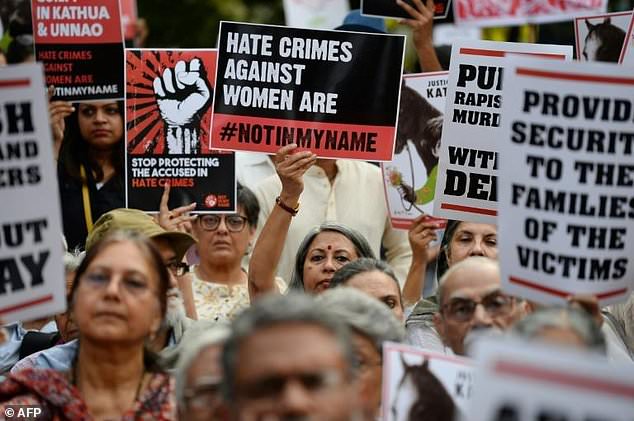 Last week, the CBI charged Sengar’s brother Atul Singh Sengar, and four others, with the murder of the girl’s father.

The girl’s ordeal went public as India was reeling from the rape and murder of a nomadic Muslim girl in Jammu and Kashmir whose attackers were defended by local BJP figures.

The two crimes underscored India’s atrocious record on rape and protesters took to city streets in numbers not seen since the 2012 gang-rape and murder of a student in Delhi.

It led to an overhaul of India’s rape laws but high numbers of assaults persist.

Nearly 40,000 rape cases are reported every year, according to official figures.

Campaigners though say the real number is higher, with victims wary of how their complaints will be dealt with or the social stigma attached to sex crimes.