New Delhi: India's top court has ruled that women can serve as army commanders, dismissing the government's stance that male soldiers were not ready to accept orders from female officers as "disturbing".

The Supreme Court also ordered the government to extend permanent service – which has only been applicable to men so far – to all women officers, signalling a move towards gender parity in the traditionally male bastion. 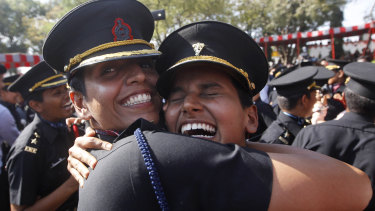 The women will get the same opportunities and benefits as their male colleagues, including ranks, promotions and pensions, and be allowed to serve longer tenures. The court did not rule on their deployment in combat roles, saying this was to be decided by a competent authority.

Until now women were inducted through a short service commission that let them work for up to 14 years. They were only allowed permanent commission in the army's legal and educational wings.

"To cast aspersion on their abilities on the ground of gender is an affront not only to their dignity as women but to the dignity of the members of the Indian Army," judges said in their ruling.

Last week the government opposed women being appointed to top roles such as colonels and brigadiers, saying most soldiers were men from rural backgrounds who were not "mentally schooled to accept women officers in command".

It also argued that men and women officers were physically different and could not be treated equally.

The top court rebuked the government, describing its views as "disturbing" and urged "the need for change in mindsets to bring about true equality in the army".

India, with one of the largest armies in the world, has long resisted including women in combat roles, citing concerns over women's vulnerability if captured and over their physical and mental ability to cope with frontline deployments.

Most countries employ women in various roles in their armed forces but only a handful, including Australia, Germany, Israel and the United States, allow them to take on combat roles.

India began recruiting women to non-medical positions in the armed forces in 1992, yet they make up about 4 per cent of the army's more than 1 million personnel, according to the latest data.

Aishwarya Bhati, a lawyer who represented female officers at court, lauded Monday's judgment as one that would remove discrimination and boost women's role in the army.

"They [judges] have completely negated all the farcical stands raised by the army to deny women equal opportunities," she told the Thomson Reuters Foundation.