Indonesia has recorded fewer than 4000 daily coronavirus cases per day for an entire week, the first time since September 18.

In the past week, daily cases have ranged from 3565 to 2618 – the lowest daily infection rate since August 27 – while the daily death toll has fallen below more than 100 on several occasions. 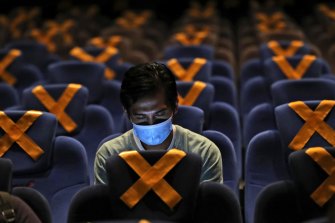 A man checks his mobile phone as he sits amid physical distancing markers prior to the start of a movie at the recently reopened CGV Cinemas theatre in Jakarta, Indonesia, last month. Credit:AP

But epidemiologists remain cautious about suggesting the country may have begun to curb the spread of the pandemic, pointing out that testing rates in the country are still not reaching the World Health Organisation's minimum daily targets.

Windhu Purnomo, an epidemiologist at Airlangga University, said a recent five day holiday from October 28 to November 1, to mark the birthday of the Prophet Mohammad, may have contributed to a small dip in the number of people tested daily to between about 17,000 to 25,000 as not all labs would have been open.

"Testing and contact tracing are the key things in fighting infectious disease. I think we have to wait another week before we can see the real numbers," he said. 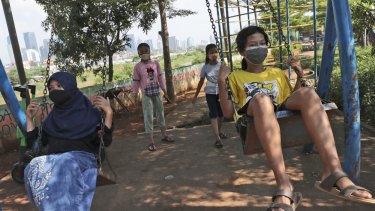 Children wear face masks as a precaution against the spread of coronavirus play on swings in Jakarta, Indonesia. Credit:AP

"I don't think the virus is reducing because the rate of testing is still low and the positivity rate is still above 10 per cent. We can say there is a reduction in transmission when the number of tests is high and the number of daily cases is low."

Former vice-president Jusuf Kalla, now head of the country's Red Cross, recently warned that Indonesia may not recover from the pandemic until 2022.

Indonesia is the most populous country in south-east Asia with 270 million people and has the highest number of infections in the region with 421,731 positive cases and 14,259 deaths.

Its testing per head of population lags far behind neighbours such as Singapore, Malaysia, the Philippines and Vietnam.