Indonesia election debate so ‘boring’ people may not vote: academic

Jakarta: The second Indonesian presidential debate was so boring it increased the chances of people not voting in the election on April 17, according to Australian National University academic Ross Tapsell. 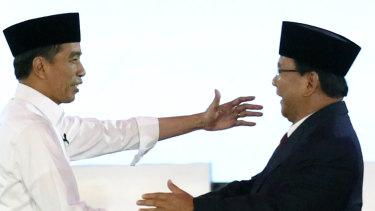 The debate was marred by an explosion in a nearby park about 15 minutes after the debate started, where hundreds of supporters had gathered to watch the candidates debate.

Police claimed their preliminary investigations indicated a firecracker had gone off, although footage of the incident appeared more serious.

Although police initially said no one was hurt in the incident, Michael Umbas – a volunteer with the Widodo campaign – was later quoted in local media saying that seven volunteers had been injured, including one person with a damaged ear drum.

As people fled the Gelora Bung Karno stadium complex following the explosion, Widodo leaned heavily on his first term achievements during the debate. 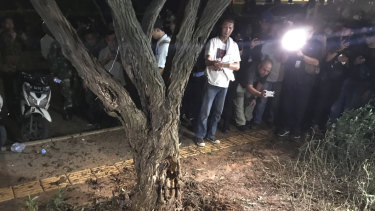 The explosion hit a tree outside the Gelora Bung Karno stadium complex in Jakarta on Sunday night, sparking fears of a bomb attack during the presidential debate.Credit:James Massola

These included distributing millions of land ownership certificates to farmers and a big infrastructure investment program that has seen close to 200,000 kilometres of new roads built, and new airports, seaports, rail lines and dams.

Both men pledged to pursue energy self-sufficiency and reduce the use of fossil fuels, at a time when energy subsidies have contributed to growing government debt, by using bio-energy from sources such as palm oil.

"We hope 30 per cent of total palm production will go to bio-fuel. The plan is clear, so we will not rely on imported oil," Widodo said.

Both men took a nationalist line on the need for the state to control more of Indonesia's natural resources, though Prabowo more so.

He criticised the president for rising imports of commodities such as sugar, wheat and corn which he alleged has hurt local farmers. 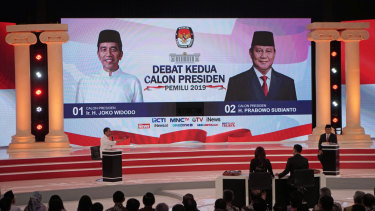 "If we are given the mandate to be in power, we will ensure affordable food for all Indonesians, while ensuring producers, farmers, cattlemen and fishermen generate adequate income," Prabowo said.

"We will cut electricity and staple food prices and provide fertiliser for farmers at low cost."

The debate between the incumbent and the two-time challenger was an improvement on the first debate as the men did not have the questions in advance, but neither man offered much in the way of a detailed program.

Tapsell, who is based in Jakarta, said after Sunday's debate that "I don’t think too many votes will swing on that debate. Both candidates basically reinforced the issues they feel important to them".

"There isn't much difference [between the two men] on policy issues or in the way they think the country should be run. That’s why you get more traction recently around people saying they just won’t vote," he said.

"People are saying the debates are boring, and there is some traction around golput-ing [abstaining from voting]."

And while the environment was one of the four topics up for discussion, Tapsell noted that climate change barely rated a mention all night.

"Both candidates didn’t say much because they just don’t have much to say," he said.

The president still enjoys a commanding lead in opinion polls of up to 20 points over Prabowo, according to surveys in late January, though a recent Indikator Politik Indonesia survey showed the gap may be narrowing.