Washington: With just hours remaining until the end of Donald Trump's presidency, Washington should be fizzing with a sense of elation.

The US capital may have been the outgoing President’s home for the past four years, but he is a reviled figure in this proudly progressive city.

In the November election, 92 per cent of voters in the District of Columbia cast their ballot for Democrat Joe Biden and just five per cent for Republican Trump. When media outlets finally declared Biden the winner of the election, the streets around the White House filled with overjoyed residents. 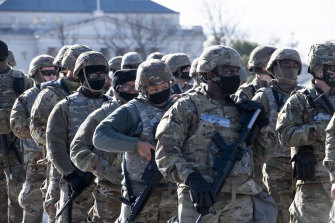 Members of the National Guard arrive at the US Capitol Visitor Centre for a security threat during a dress rehearsal ahead of Inauguration Day.Credit:Bloomberg

But instead of party central, Washington feels like an occupied military zone ahead of Biden’s Inauguration Day. Embarrassed by how easily Trump supporters stormed the Capitol building a fortnight ago, the authorities have implemented a security crackdown more severe than the one put in place in the days following the September 11 attacks.

The Capitol, where Biden will be inaugurated on Thursday (AEDT), is now surrounded by a two-metre fence topped with barbed wire.

Most of the streets in the central business district are shut to car traffic. Some are cordoned off by concrete barriers; others are blocked by brown military Humvees designed for use in combat zones like Iraq and Afghanistan. All the downtown subway stations are closed in an attempt to keep as many people away as possible. 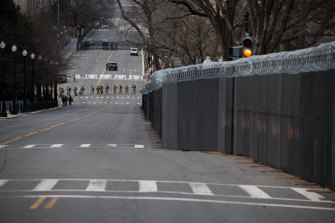 Washington is a ghost town except for the thousands of National Guard troops amassing before Inauguration Day.Credit:Bloomberg

Otherwise, the streets are eerily deserted – except for TV journalists filming live crosses and some curious locals. Military helicopters hover in the sky.

It’s now impossible to access The Sydney Morning Herald and The Age’s bureau, just a few blocks away from the White House. But you could still get close enough on Tuesday (AEDT) to hear the bells playing Amazing Grace at the historic Church of the Epiphany directly across the street to commemorate Martin Luther King jnr Day.

Most of the downtown restaurants and souvenir shops – which would usually be doing a roaring trade at this time of year – are closed. Many are boarded up with plywood to protect them from potential vandals.

The security crackdown is just the latest blow for small businesses that have been devastated by the disappearance of tourist and office customers because of the COVID-19 pandemic. Indoor dining is banned because of coronavirus and, with temperatures dropping as low as -6C at night, it’s too cold for many people to bear sitting outside for long.

Even a one-hour walk from the Capitol in the city’s residential northern suburbs, many cafes and restaurants are staying closed until after the inauguration. It simply isn’t worth the trouble to open given the traffic closures and the fact that most potential customers are sheltering in place.

Like people around the world, the vast majority of Washingtonians will watch Inauguration Day unfold on their television screens. Rather than on the streets, they'll toast to the end of the Trump era from the safety of their living rooms.