Inside the Beatles’ ‘Get Back to Let It Be’ Rock Hall exhibit: Vintage instruments, modern immersion and Ringo’s raincoat 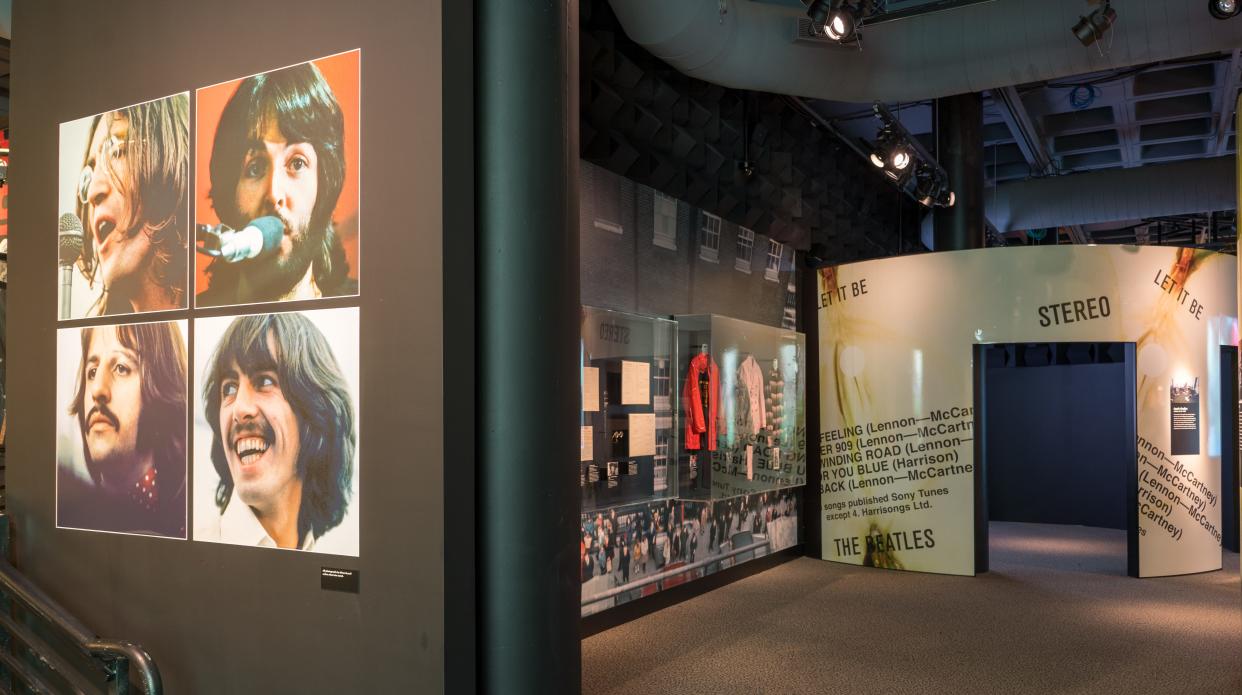 On a sunny St. Patrick’s Day visit to the Rock & Roll Hall of Fame in Cleveland, more than a few people dressed in green milled around outside the museum. The “O” in the “Long Live Rock” sign on the museum plaza had an Eagles logo affixed to it, owing to that band’s show at the nearby Rocket Mortgage FieldHouse later that night.

Inside the museum, however, there was no St. Patrick’s Day revelry or Eagles spottings — just curators and employees putting the finishing touches on the much-anticipated “Get Back to Let It Be” exhibit. Opening to the public today, the exhibit is an extension of Peter Jackson’s epic-length 2021 documentary “The Beatles: Get Back.” Via film footage, select artifacts and clothing seen in the movie, photos from the “Let It Be” sessions and related ephemera such as handwritten lyrics, “Get Back to Let It Be” reinforces the joyful humanity of the Beatles during their last year as a band.

“This is really historic for the Rock Hall,” says vice president and chief curator Nwaka Onwusa. “It’s not that we haven’t told the Beatles’ story; we’ve definitely done that and have celebrated these iconic figures. But to have the ‘Let It Be’ story told in one breath and one story — all exclusively from the collection of the Beatles — is really special.”

“Get Back to Let It Be” is anchored by three theater spaces screening footage from “Get Back’s” pivotal locations: Twickenham Film Studios, the Apple Corps basement and the infamous rooftop concert on the Apple Corps building. The exhibit loosely follows the arc of “Get Back”: You’ll enter and directly in front of you see a circular room projecting the color-rich Twickenham footage, then move toward a similar-sized room with the basement footage and then finally end up a bigger space with the rooftop concert footage projected on multiple curved screens, like a mini-IMAX experience. It’s easy to imagine how thrilling it will be to stand in a crowd of Beatles fans, watching and experiencing the rooftop concert together within an immersive sonic space.

In addition to the film footage, the “Get Back to Let It Be” exhibit features some fascinating curios from the collections of the era’s principal figures. Engineer Glyn Johns donated a vinyl acetate of songs and his marked-up handwritten calendar from May 1969 and January 1970, featuring Beatles-related and other business matters. (Lunch with Elektra Records’ Jac Holzman is one highlight.) Ringo Starr, meanwhile, contributes the tomato-red Lurex raincoat he borrowed from then-wife Maureen and the maple Ludwig drum kit he played in “Let It Be” sessions and rooftop concert. Nearby is the well-loved Epiphone Casino guitar John Lennon used in the same sessions, as well as his patch-adorned Wrangler jean jacket and iconic glasses. George Harrison is represented by flash: his smart pinstriped suit and a replica Fender Strat guitar painted in Day-Glo colors.

For Beatles fans, “Get Back to Let It Be” offers pleasing attention to detail and nods to important people and things in the band’s lore. The blanket in Starr’s drum set in the exhibit is plaid (as it is in “Get Back”) while the outside of the Twickenham space is covered with a veneer of the actual Apple Records labels, a fun touch for those who devoured Beatles records. (That’s not the only picture opportunity: Near the end of the exhibit is a replica of the Apple Corps door circa the mid-1970s, full of Beatles fans’ graffiti.)

And “Get Back to Let It Be” also contains a sweet photo of Paul McCartney taken by his late wife Linda McCartney during the “Let It Be” sessions, wearing the same black-and-gray patterned shirt in the exhibit. “It was one of his favorite shirts,” the accompanying exhibit card reads, while noting McCartney also wore it during the 1975-76 Wings Over America tour. Fittingly, the film footage is also calibrated for connection. Right before you enter the room projecting the rooftop concert, a square film screen plays footage of the Beatles walking to the roof for the concert. When you step into the theater, you’re mirroring the path the band took — a nice touch that beckons you into the movie and the Beatles’ universe.

“[‘Get Back’] really shows the creativity, the spontaneity, the humor, the sarcasm [of the Beatles],” says Craig Inciardi, Rock Hall curator and director of acquisitions. “They had their own language, the way they communicated with each other — nonverbal language even. You see that in this exhibit.”

“Get Back to Let It Be” had a lengthy genesis. Inciardi says he and Rock & Roll Hall of Fame Foundation President & CEO Joel Peresman had “been meeting on and off for 10 years” with Apple Corps CEO Jeff Jones about a potential collaboration. “[We] basically said that we would like to create an exhibit about the Beatles, with the cooperation of the band and the record company.”

The idea for “Get Back to Let It Be” specifically took shape about three and a half years ago. Not so coincidentally, Peter Jackson had already started creating “Get Back” from the treasure trove of Sir Michael Lindsay-Hogg’s 1969 footage of the Beatles during the “Let It Be” sessions. “We wanted to create an exhibit to piggyback on top of the release of the documentary,” Inciardi says. “Our concept early on was an immersive experience to complement the film. Our goal is to try to get closer and make it a unique experience for fans.”

Despite the overlapping timelines — Jackson had actually started work on “Get Back” in 2017 — Inciardi notes they “did not collaborate” with the director; in fact, the Rock Hall had the wheels in motion for the exhibit before Jackson had finished the documentary. However, “we did communicate to his team what we felt would work, and then they went back and made an edit for us,” Inciardi says. For the exhibit, he also notes they did “get input from the principals,” namely the living Beatles and the relatives/estates of John Lennon and George Harrison. (The exhibit has a prominent note expressing gratitude for McCartney, Starr, Yoko Ono and Sean Lennon, and Olivia and Dhani Harrison.)

“Get Back to Let It Be” is unique for the Rock Hall, in that the museum hasn’t done an exhibit about a film before. “The multimedia is actually the subject here,” Inciardi says. “It’s not just a complement to the exhibit. The guts of the exhibit is what’s playing on these screens — and everything else is supporting evidence.”

However, “Get Back to Let It Be” is also indicative of the Rock Hall’s evolution toward more interactive and multimedia-driven exhibits. In recent years, the museum has featured John Mellencamp narrating an exhibit about his career (in cheerfully NSFW fashion) and Graham Nash doing the same via videos, as well as a temporary exhibit of playable rock ‘n’ roll pinball machines. In a more permanent fashion, the museum now features what they call the Garage, which is full of musical instruments visitors can play and jam out on. (Also on display: The Wurlitzer electric organ once owned by the late Replacements member Bob Stinson.)

This push for more immersion informed the design of and approach to “Get Back to Let It Be.” “In last few years, we’ve been very intentional about making the museum a lot more experiential,” says Rock Hall President and CEO Greg Harris. “[With this exhibit] we didn’t feel the need to overwhelm you with artifacts, but instead to present things that were immersive, and give you the feeling of actually being right there. There’s chances to learn and go deep with artifacts, but at the same time, just to feel the emotion and energy of these moments. That’s transformational.”

Harris says the Rock Hall is planning some special weekends throughout the summer tied to the exhibit that will further bring the experience to life “and work to gather people together to celebrate these artists and all of our love for them. We’re inviting those that were involved in the making of the film and in everything else to come out and be part of these things.” (He’s mum on specifics for now.)

“Get Back to Let It Be” is open at the Rock Hall through March 2023 — fittingly, 60 years to the month of the release of the Beatles’ debut LP, “Please Please Me.” Fans who bought that record then — and future generations of fans — will no doubt enjoy this exhibit. “[Peter Jackson] was able to dispel the myth that that the ‘Let It Be’ sessions were so fraught, and our exhibit helps further that narrative,” Inciardi says. “We don’t often have the opportunity to set the record straight in an exhibit. But this is a unique opportunity for us to do that.”