Inside Trump’s impeachment trial, where a glass of milk stole the show

Washington: Just after 4pm on the second day of Donald Trump's Senate impeachment trial, a frisson of excitement rippled through the Senate press gallery on Capitol Hill.

Down on the Senate floor, Jerry Nadler, the chair of the House Judiciary Committee, was arguing why Donald Trump should become the first president in history to be removed from office by Congress.

But it wasn't Nadler's argument that thrilled the purveyors of "fake news", as Trump fondly describes members of the mainstream media. One of the 100 senators – who are serving as jurors in the trial – was drinking a glass of milk on the Senate floor. 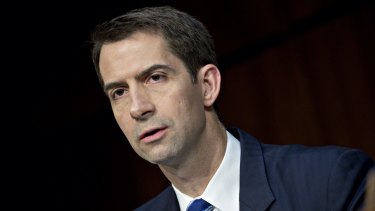 "TOM COTTON HAS MILK!" CBS News reporter Grace Segers tweeted after rushing out of the gallery to collect her mobile phone.

"This is not a drill. He has a glass in addition to his glass of water. He is the first senator I've seen to request and get milk. I repeat, Tom Cotton has milk!"

Depending on one's perspective, the moment represented either a welcome moment of respite from the tedium of the impeachment proceedings or the embodiment of everything that's wrong with the modern media and political establishment. 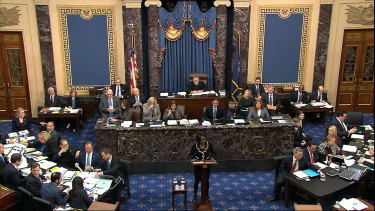 Photography is banned inside the US Senate chamber, except for stills from the official video feed. Credit:AP

Besides the occasional high-profile vote, the US Senate rarely attracts much media attention. It's a different story with the impeachment trial.

As with Willy Wonka's chocolate factory, a special ticket (maroon not gold) is required to access the building during the trial. You need another ticket on top of that to score a seat inside the chamber.

The potential appearance of dairy products in the trial was first raised the previous day when Florida Senator Rick Scott told a reporter that senators were only allowed to drink water and milk in the chamber while the trial is underway. 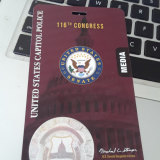 A ticket to the impeachment trial in the Senate.Credit:Matthew Knott

They cannot drink coffee, Coke or any other beverage under the strict rules for the trial. Nor can they bring mobile phones or other electronics into the chamber. Only reading materials related to the case.

Except when they visit the toilet or stretch their legs, senators are supposed to be in their seats, listening intently to the evidence being presented to them.

They're essentially political hostages: forced to listen to the equivalent of a week's worth of university lectures every day. The first day of the trial ran for 13 hours and didn't wrap up until almost 2am. Senators, who are famously long-winded, are not allowed to talk during the trial.

If they want to ask a question of the prosecution or defence teams they must submit it in writing to John Roberts, the Chief Justice of the US Supreme Court, who will read it aloud.

Roberts' presence in the chamber is another departure from normal practice. Vice President Mike Pence usually presides over Senate proceedings, casting a tie-breaking vote if required.

But given the significant skin he has in this game – Pence would become president if Trump was removed from office – he is nowhere to be seen during the trial.

For an Australian visitor, the first thing that strikes you about the US Senate, besides its bright blue carpeting, is the layout.

In Canberra's Parliament House, Coalition and Labor MPS hurl insults at each other from opposite sides of the chamber. This design – a legacy of its British heritage – is more adversarial than the one used in Washington.

On Capitol Hill, members of Congress are arranged in a semi-circle, with everyone seated on the same level. The aim was to encourage a more collegiate, less partisan environment.

And until recently that's how the US Senate worked. Crossing the floor was common, and senators prided themselves on their ability to work across the aisle to pass legislation.

That's no longer the case. All the votes in the trial so far have ben decided along strict party lines: 53 Republicans voting one way and 47 Democrats the other.

But some traditions remain.

Almost all senators sit at the same quaint mahogany desks that have been used since 1819. Bean soup is on the Senate restaurant's menu, as it has been every day since the early 1900s. And the occupant of the so-called "candy desk" – currently Pennsylvania Senator Toomey – still stocks his desk draw full of sweets for any colleagues in need of a sugar hit.

Not that you'll see any photos of Toomey doling out Mars Bars, or Tom Cotton downing a glass of milk.

Photography is banned in the chamber and the video feed of floor proceedings is controlled by the Senate itself.

Even in the home of the first amendment, press freedom has its limits.