Investigation into whether Colmont School was trading while insolvent

Victoria’s schools regulator is pressing ahead with plans to cancel the failed Colmont School’s registration, as new administrators investigate whether the school’s former owners were trading while insolvent.

The administrators, Cor Cordis, told creditors who are owed millions that it has asked the Victorian Registration and Qualifications Authority to hold off cancelling Colmont’s registration, as a claimed mystery party considers whether to present a proposal to reestablish the school in 2023. 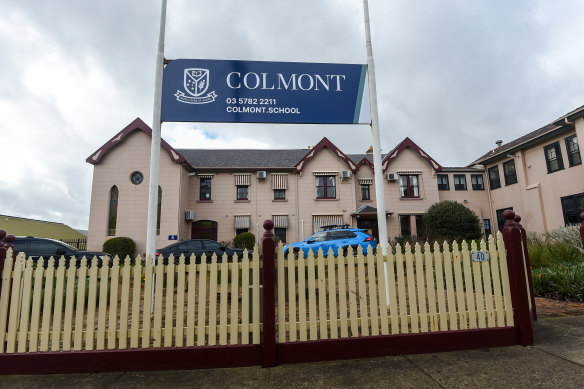 Cor Cordis has applied to the Supreme Court for a six-month extension of the convening period – the period of time administrators have to call a meeting of creditors to decide the school’s future – as it investigates whether the school was trading while insolvent and whether the directors breached their duties.

In a letter to creditors, the administrators identified “a number of agreements and transactions” that required more investigation to see if there were claims under the act to recover payments if it was liquidated.

The email estimated the school owed creditors, including parents, teachers and contractors more than $6.3 million.

This included more than $3.4 million to staff, with parents owed more than $2.2 million in bond and tuition fees and $315,723 owed to trade suppliers.

If Colmont is placed into liquidation and there are insufficient funds to pay them, employees could make an application under the Fair Entitlements Guarantee scheme, but there was also a chance they would not get a full return, the administrators said.

The administrators said that they had not yet received any proposals to take over the school, but were liaising with an interested party, who was unrelated to existing stakeholders.

“As at the date of our application, we have been informed by the interested party that it intends to present a proposal to VRQA to reinstate the Colmont School in 2023 and wishes to seek discretion from the VRQA to utilise current school and boarding house registrations and the Colmont School’s registration in the Commonwealth Register of Institutions and Courses for Overseas Students,” the letter said.

In response the authority said it “has issued a notice to the Colmont School (administrators appointed) of its intention to cancel Colmont School’s school and school boarding premises registration”. 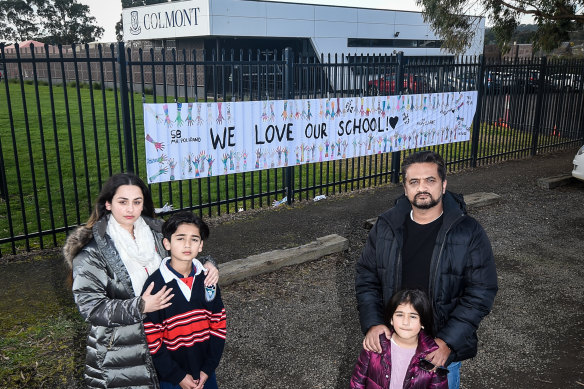 Parents Sweta and Vijay Jaswal, with son Shaurya and daughter Reanna, are looking for a new school for their son after Colmont’s sudden collapse.Credit:Justin McManus

“The VRQA must not register a school or school boarding premises unless it is satisfied that an application complies with the minimum standards,” a spokesperson said.

Parents at the international baccalaureate school were given just days to find new schools for 359 children who attended the school, following its sudden closure.

Vijay Jaswal, whose son moved to Hume Anglican School after Colmont closed to primary school students, said if Colmont reopened he would consider sending his child there again.

“At the same time we are investing time and money in the new school as well – buying school uniforms, paying fees. We’ll see. When the decision is made it will be a hard one.”

Cor Cordis took over from Vince and Associates as administrators for the school earlier this month.

The school, which was formerly known as Kilmore International School, was heavily reliant on international student revenue and leased its buildings and facilities. It recorded a $4.38 million deficit last year and $620,000 loss in 2020.

The school’s landlords received $2.12 million a year in marketing and licence fees between 2017 and 2020. Those fees, for the use of the Kilmore International School name, were decisive in prompting it to change its name to Colmont School in July.

The application for the extension of the convening period will be heard at the Supreme Court of Victoria on August 29.