Baghdad: Iraq will allow the Reuters news agency to go back to work after its license was suspended earlier this month over a report that the government was underreporting coronavirus cases, the news agency said on Sunday.

The agency’s suspension came after an April 3 story cited multiple sources who said the government was misreporting coronavirus cases, and that the true number of infected nationwide was in the thousands. Iraq was reporting cases in the hundreds at the time. 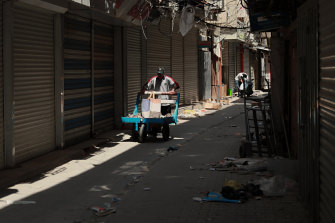 A street vendor pushes his cart an almost empty market during a curfew to help fight the spread of the coronavirus, in Baghdad, Iraq.Credit:AP

In a news item, the agency said it was informed by the Iraqi Communications and Media Commission, the country's media regulator, that the suspension was being lifted "to allow transparent and impartial work by the media".

Reuters said it appreciated the efforts made by Iraqi authorities and the CMC to resolve the matter. Iraq's President Barham Saleh had said his office had been working to revoke the suspension in remarks to CNN last week.

According to official Health Ministry figures, Iraq has 1539 confirmed coronavirus cases. At least 82 people have died of the virus and 1009 had recovered.

The Reuters report had said the true number of virus cases ranged from 3000 to 9000.

The incident was the second time journalists have come under fire for challenging the official count of coronavirus cases in the Middle East. In late March, Egypt expelled a correspondent for The Guardian over a report citing a study that suggested cases in Egypt were higher than authorities had reported.