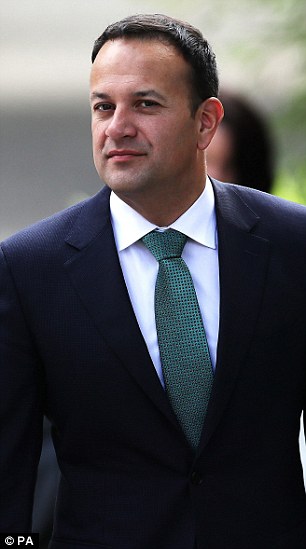 Irish prime minister Leo Varadkar was yesterday savaged over his suggestion that British planes could be banned from flying over his country’s airspace in the event of a ‘no deal’ Brexit.

Even allies in Brussels warned the Irish Taoiseach against engaging in ‘tit-for-tat’ threats, pointing out the majority of lorries transporting goods from Ireland to the continent go via England.

Other critics warned his suggestion would unleash ‘chaos’ across the continent.

The row comes amid growing fears of a no deal scenario and what it could mean for both sides.

Both Britain and Brussels announced within the last 48 hours that they are issuing guidance on how to accelerate preparations for a hard Brexit if not enough progress is made on the Withdrawal Agreement by 29 March 2019, when Article 50 ends.

Mr Varadkar suggested British planes could be banned from flying in Irish airspace and that it could extend EU-wide.

He said: ‘The situation at the moment is that the United Kingdom is part of the single European sky, and if they leave the EU they are not and that does mean that if there was a no deal, hard Brexit next March, the planes would not fly …

‘If they want their planes to fly over our skies, they would need to take that into account.’

However, a senior official involved in negotiations tore into the claim yesterday, saying that allowing British planes to be grounded was very unlikely.

The official said: ‘I don’t think it will happen. Ireland is very keen on having a withdrawal agreement. They are the most affected.

‘Practically all lorry traffic from Ireland to the continent goes via England so it wouldn’t be a good idea to get into a tit-for-tat.

‘That’s not to mention all the planes that cross over UK airspace from Ireland to the continent.’

If a deal is not reached by March the UK would crash out of the European Common Aviation Area, which comes with nine ‘freedoms of the air’.

This includes the ability to fly over other countries without landing. In theory, British planes could be grounded if no agreement on take-off and landing aviation rights within the EU’s ‘single sky’ airspace was found.

However, officials believe this is unlikely and that unilateral measures would be introduced to allow British planes to continue using the airspace even in the event of no deal.

Conservative MEP David Campbell Bannerman said Mr Varadkar’s comments amounted to ‘blackmail’, adding: ‘UK and Irish operators will fly into Europe and then fly services within and around Europe.

‘This is very important to European travellers and losing these services would be a magnificent example of cutting off one’s nose to spite one’s face.’